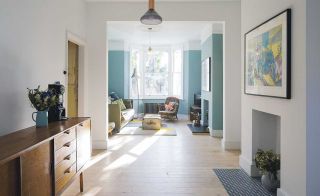 Skirting, door architraves and cornices were all devised when walls were wet plastered and not as smooth as today. The plaster finish was rough and needed a junction (stop edge) at the floor and ceilings. The skirting function was therefore intended to hide the junction at the bottom of the plastered wall. The skirting also hid the rising damp in houses before damp proof courses became the norm.

Here we look at the types of skirting boards available to you, and explore which type might be best for your project.

Do I need Skirting Boards?

Skirting boards are essential at forming the junctions between construction materials — potentially covering untidy or uneven joins. They also provide a barrier that protects the wall from scuffs and dents caused by people and pets moving through and vacuuming.

But skirting boards offer more than practical benefits — they are an important part of the interior detailing.

Types of Skirting Board

Most self-builders hoping to create a contemporary home are familiar with shadow gaps — those tiny ‘flash gaps’ or ‘controlled gaps’ designed to replace skirting boards and allow for movement between the two planes of the wall and the floor.

When carried out correctly shadow gaps can look wonderful — the perfect example of the ‘controlled joint’, the finishing touch to a beautifully crisp, clean-looking white-walled room.

However, getting them correct can prove extremely difficult. “While shadow gaps can look striking, it is a costly and time-consuming addition to achieve the requisite crisp and accurate detail,” says architect Neil Turner, director of Howarth Litchfield.

If shadow gaps are not done right it can ruin the whole internal effect, and many architects argue that they are so labour-intensive that they are hardly worth the expense in private houses. The other argument against shadow gaps is that they do not prevent damage to the bottom of the wall.

If you omit shadow gaps there is one solution that keeps the two planes at right angles: it is to have a skirting that is flush with the wall. If you can achieve this without adding a new material, so much the better.

Again, at least two layers of plasterboard are required with the skirting mounted on the first board. A plaster bead is positioned on the outer board to create the shadow gap above the skirting. In this example, the skirting should be simple with no detailing. The shadow gap between skirting and wall becomes the ‘decoration’ in reverse.

The old skirting board is not dead yet, and creating a modern version is fine; with no need for the expense of double layering the plasterboard.

If you want to create a modern skirting board, there is no need for the expense of double layering the plasterboard. Design a simple profile using square routed shapes, and a contemporary board is the result. Follow the theme through in the architraves to the doors. If the boards are painted the same colour as the wall then they disappear into the wall. If a varnished timber board is used the skirting becomes more prominent.

There are many types of traditional skirting boards, with detailing at the top that follows skirting profiles as the Victorian, Lambs Tongue, Reeded and Ogee.

If the project is a renovation or if you hope to create an impression of an old building then getting the proportions right is an important element. Designing a grand dining room and putting a 100mm skirting board on is going to look wrong. The skirting should be large (300mm) and with detail to mimic the era.

Colour is important — the Victorians used maroons and browns, grained to look like wood. These colours are not popular now, but a neutral white to contrast with coloured walls works well.

How to Choose the Right Skirting Board

Think hard about the style and age of your property. Don’t just pick a skirting or door in isolation. Many house designs are spoilt because there isn’t a unified theme. Select the style, door, ironmongery, plaster junctions and aesthetic that you want to achieve.

For example, Georgian and Victorian rooms are often tall, with ceilings at 3m and well above. By the Edwardian period (1901-1910), the average height was reduced to 2.7-3m, and modern houses are 2.4m and less. The skirting needs to be in proportion, so avoid a large board in a small room as this will dominate.

Discuss your preference with your architect or designer. A recessed skirting or shadow gap needs planning in advance, and there is an additional cost in terms of material and labour.

If you have a family and pets you might want to consider the potential for damage to the lower part of the wall. A modern board with a simple profile is an alternative — and, if the board is going to be painted, you could use low-cost MDF rather than timber. Tiles laid on a floor in a hallway or bathroom can be used as a skirting to give the impression of greater width by using the same material as the floor.

As with many design decisions there are no absolute rules. Design the skirting around all the other elements of the interior and you won’t go far wrong.

Should you Add Skirting to a Brick Wall?

What if the walls are not absolutely flat, but irregular stone or brick? Many architects like the idea of an exposed stone wall in a sitting room if part of the house is a conversion of an old stone building.

“Stone walls go well with oak floors,” says architect Howard Nash, who has retained some of the original brick and stone walls in his old house conversion in Suffolk. “In this instance I would advise not using a skirting. The best option is to leave a 10mm expansion gap and fill this with cork.”

However, with straightforward plaster walls and free-floating timber floors, a skirting board effectively doubles the ‘cover space’ afforded to allow for the expansion and contraction that will inevitably occur.