Listings for above images at bottom of page

Summary: Plastic is by far the cheapest and thus the most popular option. There are dozens of manufacturers, many now integrating fascia and soffit systems. There is a choice of colours and profiles (half-round is the cheapest), as well as different sizes, i.e. the drainage area.

Summary: Cast iron was the main material used before the advent of plastics. It’s still available, though used mostly for conservation work.

Disadvantages: It requires repainting at least every five years and is expensive.

Summary: A surprising variety of metals are used for rainwater goods, copper, galvanised steel and aluminium being the most popular.

Advantages: All of the above metals promise many years of maintenance free service and look great on contemporary-style homes.

Disadvantages: Their effectiveness depends on how well they are installed: many people experienced gutter issues after the prolonged snowfalls in 2010, and often the cause of the problem was that the screws used to fix the guttering simply weren’t strong enough to support the extra loadings.

Rainwater systems must be looked at as part of the overall roof design — and the house as a whole. For a modern self-build, in truth PVCu often wins the day for its versatility and low cost. However, many contemporary-style homes opt for steel and aluminium for their sleek, streamline looks. For traditional-style homes, cast iron is usually favoured, although copper can be an option, particularly on traditional-style barn conversions.

Hoppers are funnel-shaped rainwater collectors that divert to a downpipe. Elaborate cast iron and lead versions are of great significance on many façades of historical buildings. Rainwater diverters are a clever way of diverting rain to a water butt — when full, simply close the outlet. Rain chains (Kusari-Doi) have been used for hundreds of years in Japan and are now used as decorative and functional features in the UK.

Whether installing new downpipes and guttering, or repairing an old rainwater system, take a close look at the various elements available with a comprehensive diagram detailing each individual component.

1. Gutter: Available in up to 3m lengths, the guttering must slope gently downwards at least 12mm every 3m towards the RUNNING OUTLET in order to provide effective drainage. It should be fixed at 1m intervals with a GUTTER SUPPORT BRACKET.

3. 90° Gutter Angle: Allows a run of guttering to continue around a corner. A GUTTER SUPPORT BRACKET must be fixed within 150mm on both sides of the angle.

4. Stop End Outlet: Sits at the end of a run of guttering to close the pipeline, and lets water out by connecting to the DOWNPIPE. Usually supplied as a ‘right’ or ‘left end’, depending on the layout.

5. Hopper: Funnel-shaped rainwater collector that diverts to a DOWNPIPE. Elaborate cast iron and lead versions are of great signifi cance on many façades of historical buildings. On some old houses, hoppers took out grey water, but this is not permitted now.

6. Downpipe: Available in lengths up to 2.5m, it lets water run down to the SHOE. Fixed to the wall with a DOWNPIPE BRACKET.

7. Downpipe Bracket: Secures a DOWNPIPE to the wall — there should be one positioned near the top of the first pipe and then around every metre after that. Two sorts are generally available: the saddle bracket and the barrel clip (shown). The saddle bracket just holds the pipe away from the wall while the barrel clip gives a firmer grip to the pipe and prevents it moving up and down. 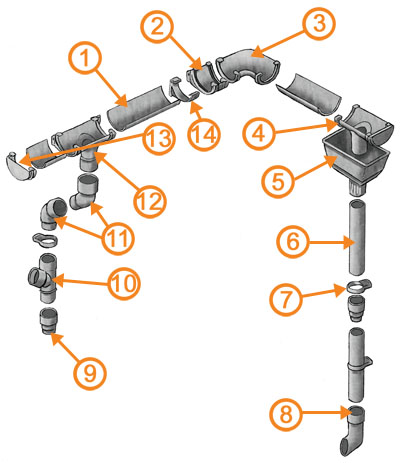 8. Shoe: Fitted at the base of the DOWNPIPE to change the direction of the flow of water, discharging it horizontally, clear of the wall, into a drain or hardstanding — which it should be positioned around 40mm above. Cast iron shoes may be decoratively branded with dates or crests.

9. Downpipe Connector: Allows more than one DOWNPIPE to be connected in series. Cast iron connectors are sometimes decoratively branded. Plastic downpipes may, however, just join by sitting the upper pipe inside the lower, without connectors, which creates a watertight seal.

10. Branch: Single branch for joining two DOWNPIPES together, to divert the water from another roof section into the same drain.

11. Offset Bends: At either a 112.5° (as here) or 92.5° angle, these bends bring the DOWNPIPE close to the wall, ensuring water runs vertically, thus reducing debris build up.

12. Running Outlet: Provides an outlet to the DOWNPIPE for rainwater along the length of guttering. Unlike a STOP END OUTLET, it connects to a guttering run at both ends.

13. External Stop End: Closes off a run of guttering.

14. Gutter Support Bracket: Attaches the guttering to the facia at 1m intervals.

NB: While this diagram serves as an aid to those purchasing and/or installing rainwater goods, we have opted to show the wide selection of components on offer as opposed to a full working setup. Cast iron is found on many period properties, but other materials include steel, aluminium, zinc, copper and PVCu, which is most often used on new buildings. Guttering is commonly available in three shapes: half-round, square (box) and ogee; downpipes may be circular or square.

The simplest way to collect rainwater is to lead a ‘rain diverter’ from a downpipe to a water butt — useful for watering the garden. From around £2,000, a more significant rainwater harvesting system with an under – ground tank can be installed, which will also treat the water, allowing you to use it for non-potable purposes around the house.