If you’re looking to build your own home, but don’t have the available time or knowledge in order to project manage your own build, then you might be tempted to go down the package build route.

Package build or kit homes are fully specified at the design stage and often prefabricated off site. This leads to a quick and efficient build process with fewer unexpected surprises, and thus more certainty when setting the budget.

Kit homes are no longer limited to a range of designs chosen from a brochure. Bespoke options are available, while off-the-shelf designs can be altered to ensure they suit your lifestyle needs. 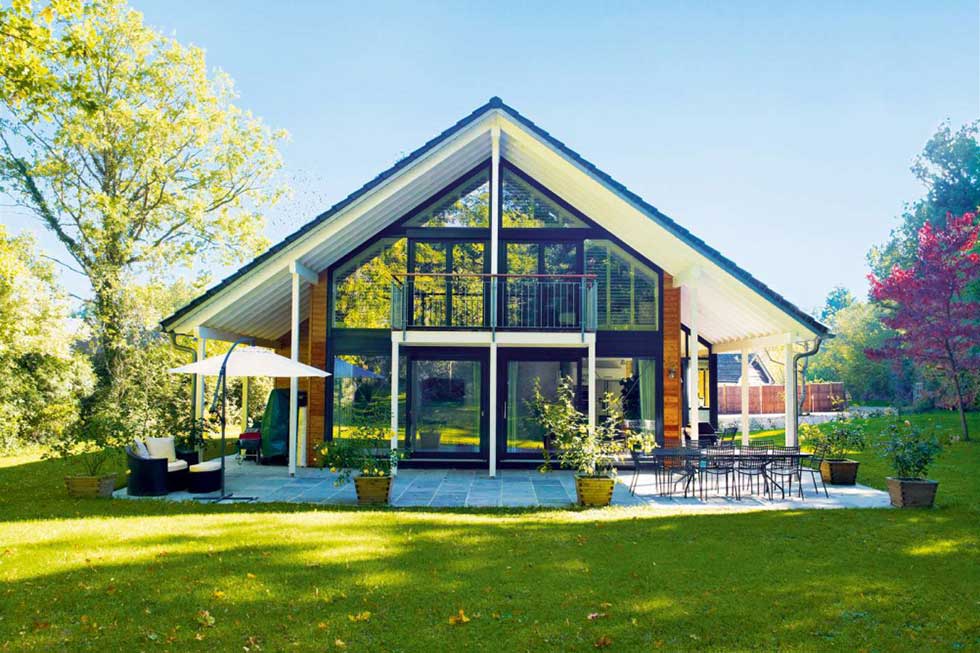 Kerrie Daykin and Emile Borgonha turned to a German package supplier for their eco-friendly chalet-style self build.

The couple had been considering a traditional oak frame property, but instead opted for this contemporary A-frame design, which was constructed by Baufritz to have outstanding green credentials.

The package company positioned the house to make best use of the sunlight. This southern most orientation is complemented by the house’s most striking feature, the overhanging roof. It protects the interiors from overheating in summer through several composite tilt and turn windows, while still allowing the low winter sun to penetrate the open plan interiors. 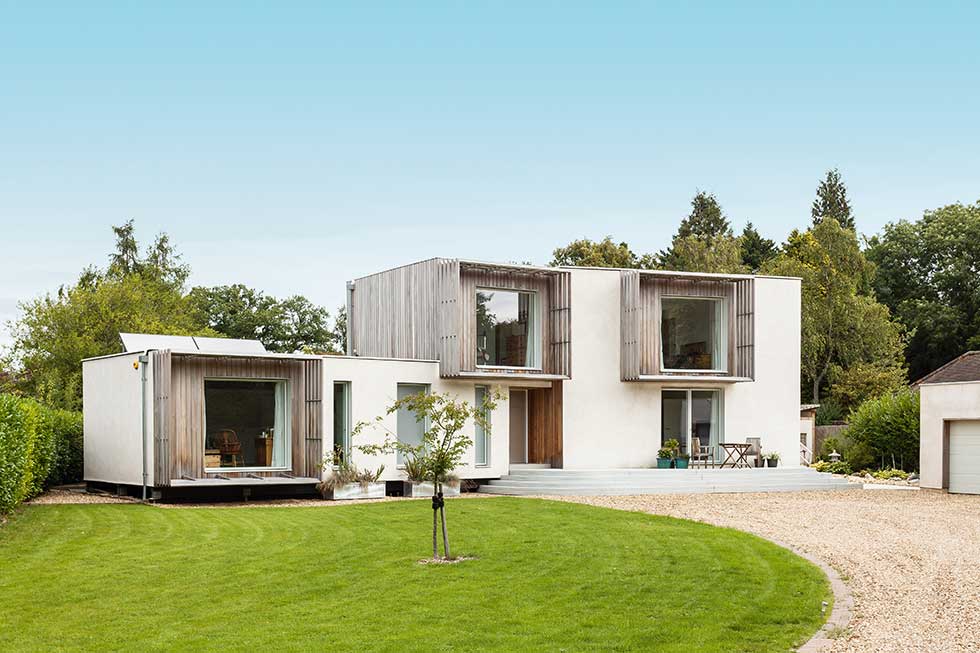 This low-energy, contemporary home was built using an innovative dry construction technique with some of the stages taking place offsite. This meant that the house took just six months to construct. The result is a super-insulated and highly energy-efficient home, with flexible living space and light-filled interiors. 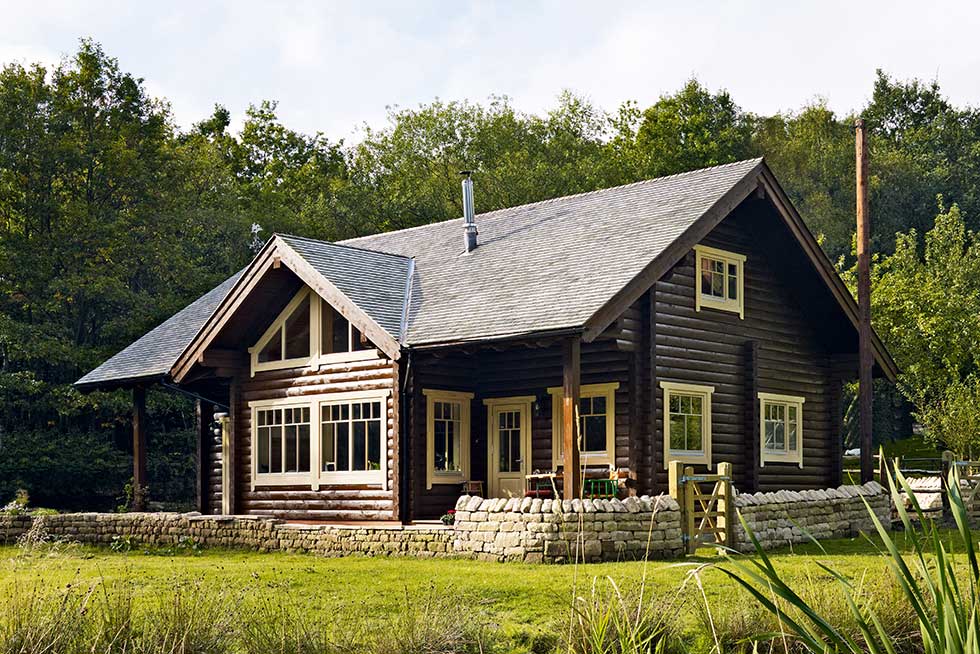 The speedy build also meets and surpasses eco requirements and costs the homeowners very little to heat and run. 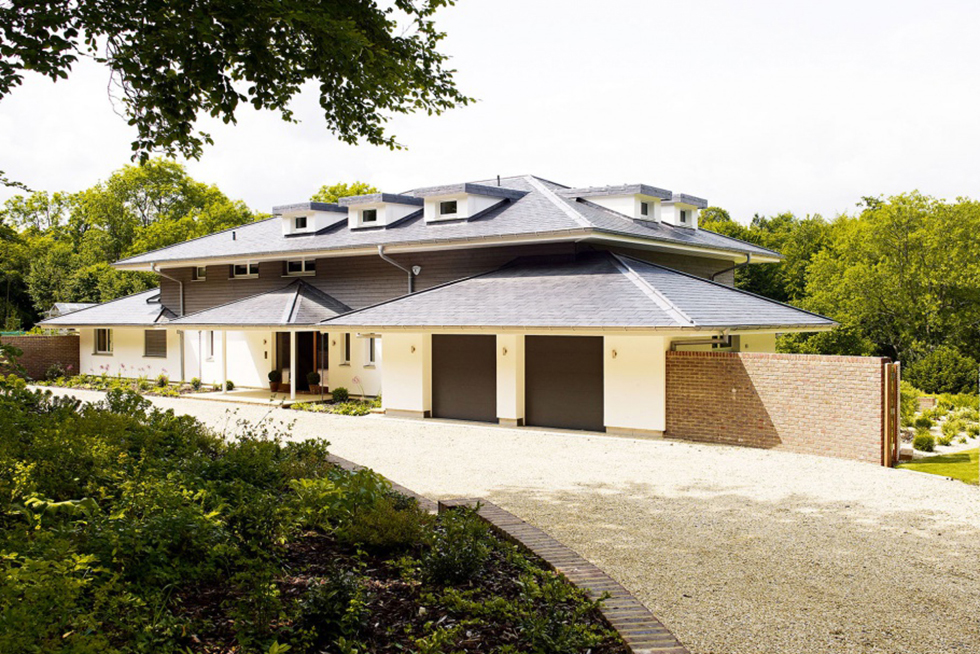 Liz and Mike Hauck wanted their new home to be contemporary – unlike the large traditional homes nearby – practical, and easy to maintain as they approached retirement.

They were also looking for a house that wouldn’t be a source of toxins, as Liz suffers from multiple chemical sensitivity, a condition triggered by materials in the built environment.

So they chose German package company Baufritz to construct the home, as the company has a unique building system using natural, healthy materials and a carbon shielded coating designed to minimise electronic radiation.

Chrissie and Richard Baker were looking for a contemporary but unfussy design with lots of glass, inside/outside living, an open plan living area and a garage underneath. They also wanted their new home to be low energy.

Rather than using an architect, a quantity surveyor or a project manager, the couple spent many hours planning and designing their dream home on a simple piece of home design software, using magazines and the internet to guide their schemes.

They then turned to Potton, who turned their conceptual drawings into working constructional drawings and planning submissions before designing and erecting the timber kit home. 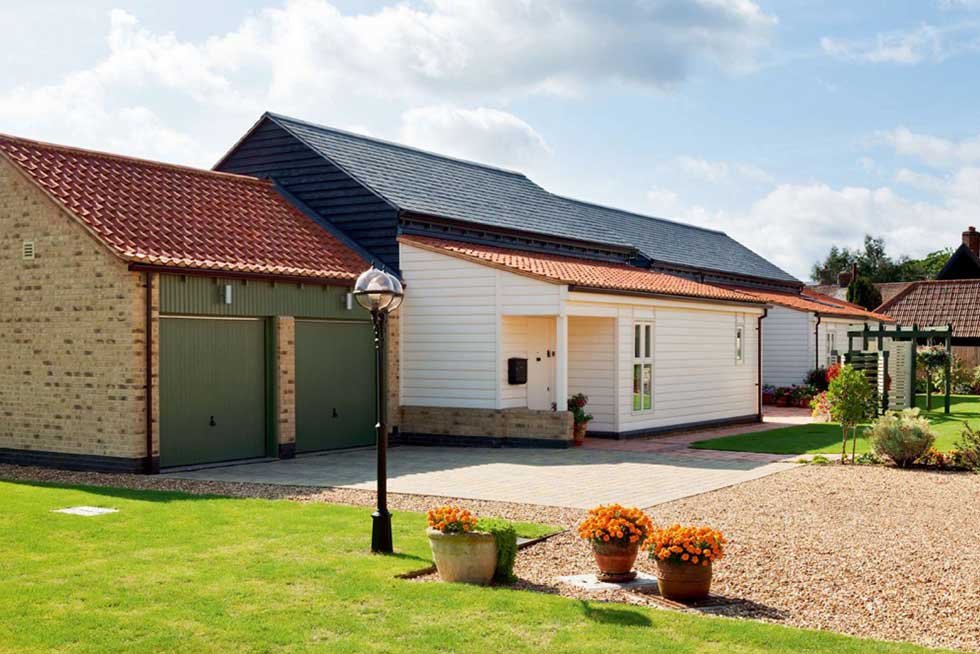 This timber frame single-storey property was designed to look like two old weatherboarded barns connected by a glazed conservatory link.

Peter and Rita Hutchinson worked with retired architect and friend Clive Plumb to plan their home for their retirement. They then employed a local builder to organise their project, and used a bespoke timber frame kit which was designed and erected by Potton.

The spacious 400m² single storey layout contains only two bedrooms, and has been totally dictated by the couple’s lifestyle and their overriding desire for open spaces and large rooms with high ceilings. 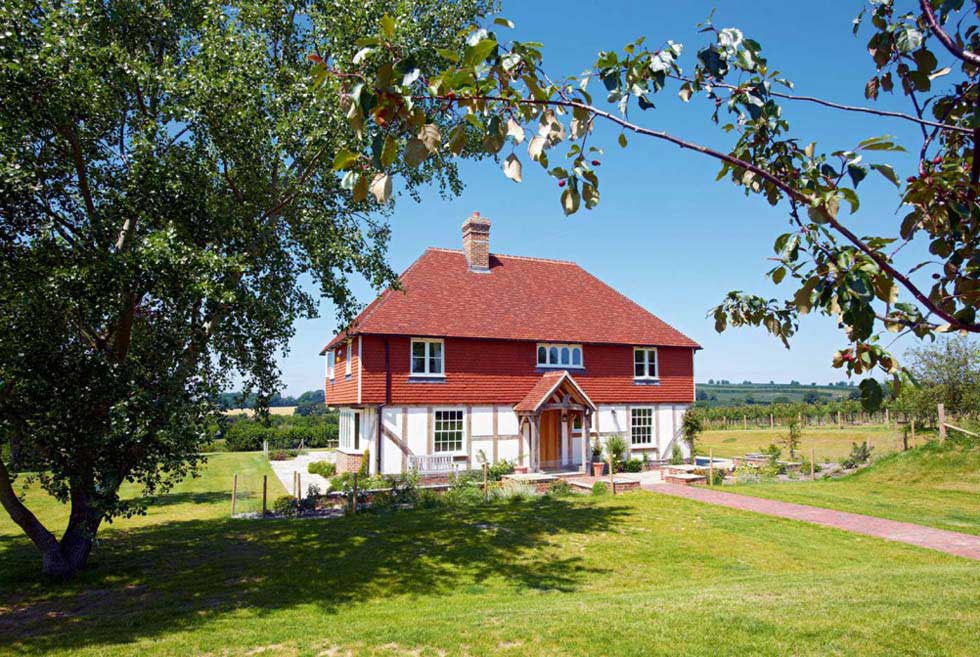 Paul and Kate Lauder wanted a traditional Kent-style house that would fit in with the local vernacular and look as though it had evolved over the years.

Oakwrights was commissioned to build the oak frame that makes up the main construction element of the house and is largely responsible for the characterful, period look.

The main section of the house has been designed to replicate an old Kent farmhouse. Another section is designed to look like a later addition, with partial timber weatherboarding over brick, and dormer-style windows. A smaller single storey ‘extension’ has been fully weatherboarded and painted in a different colour.

To complete the illusion of a house that has been added to over the centuries, a number of different window and casement styles have been used. 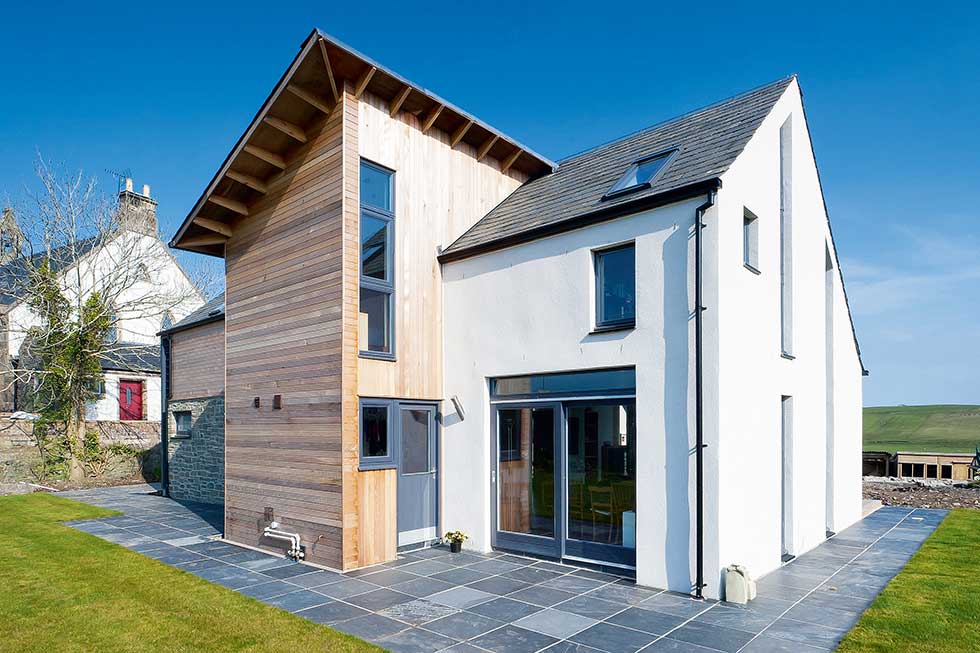 ‘Minsters Walk’ was constructed as a bespoke timber frame kit, with an off-the-shelf design  customised for the homeowners’ needs.

The homeowners, Ellen and John McCann, chose the ‘Borve’ house from Firefly Wood, which is suited to south-facing plots like this one. The layout keeps service zones to the north and living spaces to the south to make the most of the sun and passive solar gain for warmth. The design is open plan and has double-height living spaces to maximise light.

The McCanns decided to dispense with the fourth bedroom, and include a studio and study space instead. They also removed several doors to enhance the open plan arrangement. For the interior, they used oak and ceramic floors with oak detailing in the staircase and kitchen. 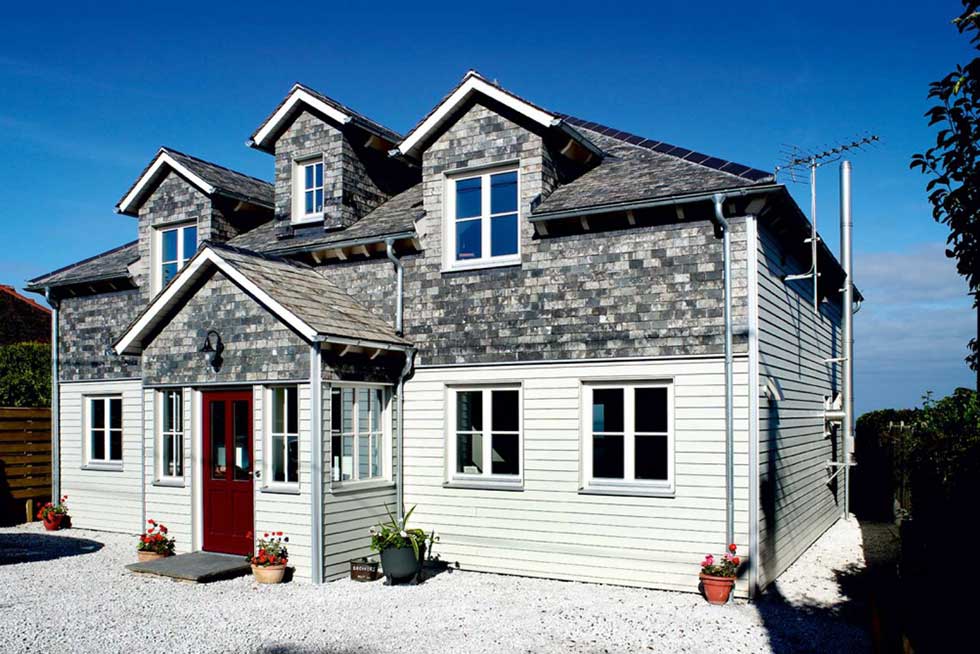 When Andy and Alison Nicholls first contemplated building their own home, they were driven by their wish to save energy bills rather than any desire to build a pioneering home.

Nevertheless, the Nicholls are now the proud owners of what is believed to be the UK’s first carbon-positive home.

The home, which uses natural materials and building methods, locks away more CO2 than was emitted during its construction and manufacture — including transporting the entire building from Germany and even running the house for the first few years. 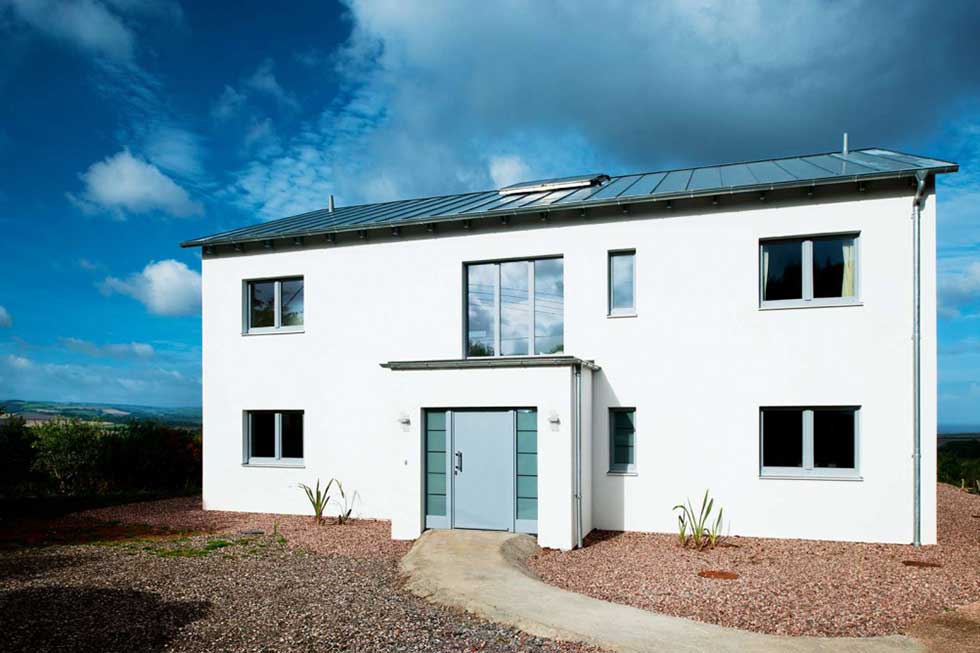 Homeowners Richard and Rachel Stent replaced their old 1930s home with this contemporary PassivHaus, which was built as a turnkey project by German manufacturer Hanse Haus.

Once planning permission had been granted, the couple undertook two trips to Germany to refine the drawings and specify internal finishes, including flooring and sanitaryware.

Quick build times are common when building a Passivhaus, due to the large amount of factory prefabrication involved. The shell of the house was completed in just two days and four months after work first began on site, the family moved into their new home. 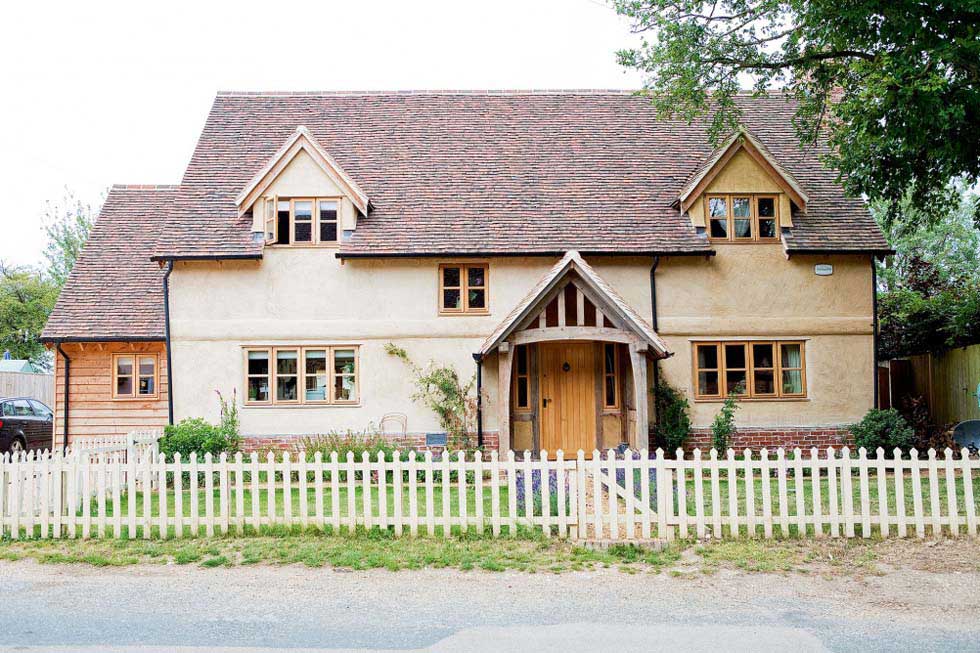 This oak frame cottage been constructed using SIPs (structural insulated panels) for a quick build, while maintaining a period style with a traditional porch.

Border Oak was responsible for erecting the oak frame, which has been finished externally with traditional lime render. The timber framed utility room is clad in contrasting weatherboarding, and a traditional picket fence adds the finishing touch.

High-quality building materials, including handmade clay roof tiles, oak doors and windows were selected. Internally, the cottage has been finished in pale pastel shades designed to show off the oak beams and joinery. 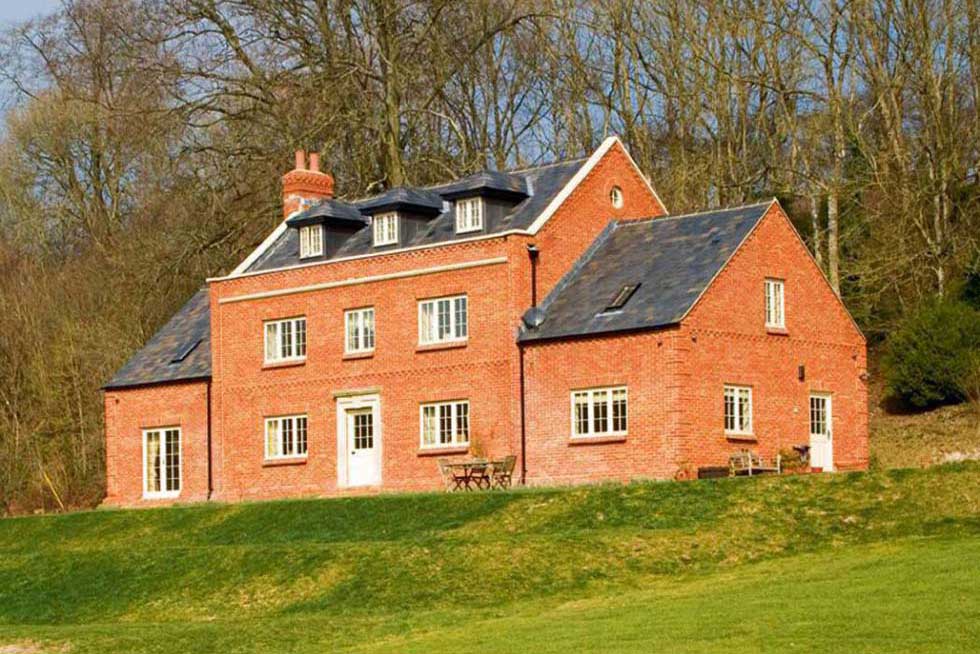 This four bedroom red brick home combines the charm of a traditional farmhouse with modern technology, such as a sprinkler system and a ground-source heat pump powering the underfloor heating.

Homeowners Simon and Louise Sturdy chose to use a Potton timber frame, as speed was important to them. The couple worked with one of Potton’s in-house designers to develop a bespoke design based on the company’s Rectory range, incorporating fine casement windows and a sweeping feature staircase.

Once the foundations and slab were completed to precise dimensions, the timber frame was delivered and erected by Potton in just two and a half weeks. 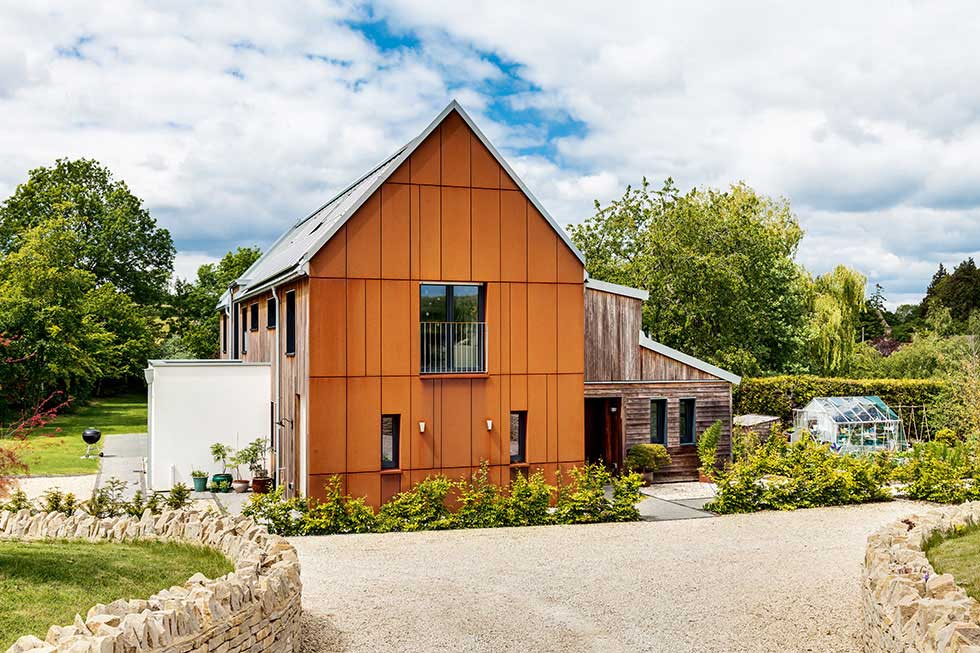 Homeowners Robin and Miyuki Walden met several package suppliers at a Homebuilding and Renovating Show, including Hanse Haus — the German package company they eventually chose to build their home.

“While Hanse Haus built the home, it was crucial we had our own architect as the planners insisted we respected the local Cotswolds style. Our architect Renato got it spot on. Once he had done the sketches he sent these off to Hanse Haus,” says Robin.

The result is a striking home that takes its cue from the nearby agricultural buildings, using Cor-ten steel cladding.

Energy efficiency was another priority for the couple. The home features a host of renewables features including 16 photovoltaic panels, a borehole and air-source heat pump with underfloor heating. Triple-glazed windows, along with masses of insulation, keep the home airtight.