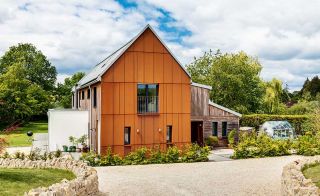 Corten, or weathered steel cladding, is corrosion resistant while maintaining tensile strength. By adding alloying elements (copper, chromium and nickel), the rust film congeals on the surface and virtually stops all further rusting.

How does Corten weather?

While other metals used in construction are designed to resist corrosion, Corten invites rust to form on its surface. The rust itself forms a film which covers the surface and forms a protective layer. You don’t need to treat it and you certainly do not paint it: it’s all about making rusty steel look attractive.

When it’s supplied to site, it looks just like you’d expect sheet steel to look, all black and shiny. Put it up against the elements and the rust gradually takes hold. It first turns a streaky yellow, which tones down to orange and after a decade or two this all goes a gorgeous dark-brown purple colour.

How long will Corten last?

Rusting Corten should in theory last a couple of centuries, provided the climate is not too hostile — it doesn’t like sea salt, as this tends to eat through the congealed rust layer.

What are the drawbacks to using Corten?

While it is largely rust-proof, there are inevitably small amounts of rust which tend to pool underneath the installation. It is worth therefore paying attention to locating it above surfaces that don’t stain or will be disfigured in any way.

Is it practical to use as a wall cladding?

Yes – it’s no longer the preserve of the cutting edge and it is beginning to move mainstream. In fact, it can be fixed in a number of ways, depending on its use.

How can I be sure I am getting the real thing?

The name Corten (also written Cor-ten) is trademarked to US Steel, the inventors of the alloy. US Steel sold the Corten business to the Indian multinational ArcelorMittal in 2003 and no longer produces any Corten, but the company maintains the rights to the name.

There are many producers around that produce weathering steel that is often referred to as Corten. Specifiers wanting the real thing have to pay a little more and for this they get a stamped receipt.

How much does Corten cost?

Corten is around three times as expensive as ordinary mild steel plate. Yet looks identical when new, so it’s perhaps not a bad idea to get some verification as to what you are paying for, as the finished look won’t reveal itself for a decade or two.

As a base metal, Corten sheet is similar in price to metals like zinc or copper. It will never compete with the usual claddings like brick, timber and render, but is perhaps comparable with stone or glass.