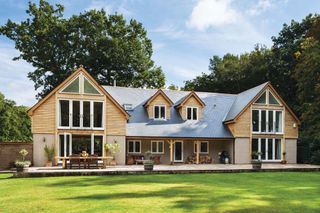 Bungalows do not generally lend themselves so readily to being extended compared with two-storey homes. There are some design challenges to address prior to taking on this building project. For instance: how do you deal with and extend a low roofline, and how do you introduce natural light to existing rooms in a newly extended bungalow?

It’s critical when you are looking to extend a bungalow that you consider the impact additional floor space will have on the existing house and the overall massing of the house.

These issues can seem daunting, but can be overcome with clear, simple, creative design devices.

How to Extend the Roofline

One of the biggest challenges is how to extend the roofline. Introducing a flat roof is one of the simplest solutions, but it needs to be handled carefully so that it does not look out of context.

The most successful way in which a new flat roof can be added is as a stand-alone element, with the new roof slid under the existing eaves. The flat roof can be a simple single form with a very small parapet that drops down at the eaves junction to allow for rainwater outlets.

It is also possible to join a new flat roof at the same level as the existing eaves, but this can be difficult to achieve structurally and the join can look awkward. What’s more, inserting such an element as a self-supporting structure simplifies the requirement for support within the existing building, therefore decreasing the amount of structural remedial work required.

Monopitch roofs can be used too to fall toward the existing eaves of a bungalow. They can also prove beneficial in increasing the area of glazing.

Ideally monopitch roofs will sit independently of the existing bungalow roof and have a distinct and different roof pitch — this way they’re seen as a new form rather than trying to fit in with what’s already there.

Joining the Extension to the Existing Bungalow

Extensions are typically built to be structurally independent from the host house. In other words, the house and extension sit next to one another so that the extension does not require structural support from the main house. (A weathertight seal is typically created between.)

One key consideration is how the new addition should be joined to the bungalow — and this is both a structural and aesthetic issue.

To begin, if the new extension is designed to enlarge an existing space – perhaps creating an open plan kitchen diner – then attention needs to be given to how this large opening between new and old will be supported. This may mean introducing a structural beam. As such, a structural engineer should be consulted early on.

There are also a number of design features that architects rely on too in our quest for join old with new.

The secret gutter can be an extension of the flat roof essentially, but it may be at a lower level, formed in timber and covered with a waterproof membrane. The gutter can be set just below the existing roof eaves line of the bungalow, to take the rainwater from the main roof as well as the new flat roof.

Incorporating large doors and windows are obvious ways of introducing daylight, but rooflights should also be considered, particularly those at the junction between the existing property and the extension — they work wonders in blurring the connection between old and new. They also help bring natural light into the centre of the floorplan.

If you’re considering including a rooflight between the old and new structure, then it’s generally easier to add this into a new flat roof.

If you choose to employ a glazed link, then one successful solution is to use a very thin structural glazing system that can be supported by thin steel channels, inserted into existing masonry and bolted to the existing structure.

Consider cladding for the new addition carefully. There is nothing worse than trying to match existing materials like brickwork and not quite achieving a successful match. It is far better to have a natural break, either in materials or via a glazed element. Indeed, when taking on such projects, remember you are adding something of the 21th century — make sure you celebrate that fact.

The humble bungalow must be handled with care. It’s been around since the 17th century and will continue to be part of our housing stock for many centuries to come.