The End of the Cavity Wall? | Homebuilding & Renovating Skip to content

Building walls has become progressively more complicated. In the early years of the 20th century, we went from using solid materials to building with cavities. In the later years, we began worrying about heat loss and started adding insulation. The requirements grew ever tighter, but it used to be a relatively simple question of putting in enough insulation to keep the building inspector happy. Builders referred to the process as ‘meeting Part L’.

Part L – it’s called Section 6 in Scotland – is the section of the Building Regulations that deals with energy efficiency. It used to consist mainly of tables of U-values which dictated how you should build walls, roofs and floors, and how your windows should be made. Then it started on other things like lighting and boiler efficiency. And then the U-value tables, from which you could readily work out how much insulation you required, disappeared altogether, to be replaced by complex whole-house heat-loss calculations which can only be derived from detailed measurements and hours stuck in front of a spreadsheet. Now, even the building inspectors no longer understand Part L.

In October 2010, both Part L in England and Wales and Section 6 in Scotland were amended once again. These latest revisions call for new homes to be 25% more energy efficient than the 2006 standard. Exactly how you do this is left to us to work out.

What slowly emerges from the calculations are a series of standard details which filter through the industry remarkably slowly. By the time everyone has got their heads around the new Part L requirements, they go and change them again. This time it’s no different. But what has emerged from the gloom is that an acceptable wall U-value target will now be around 0.2. So, how do you build a wall that meets this standard?

How a Cavity Wall is Built 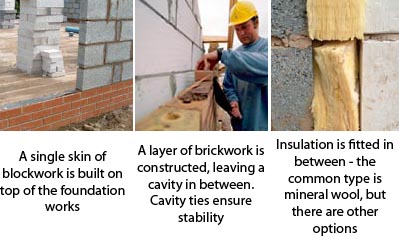 The cheapest solution is usually to use mineral wool batts filling the cavity. But to get the U-value down to 0.2, you will need to use 150mm of mineral wool, which means having a space-gobbling 150mm-wide cavity. Traditionally, cavities were just 50mm wide! So, is there an alternative solution? Thankfully, yes — you can use plastic foam board (like Celotex or Kingspan) which costs more than mineral wool, but provides better insulation values. These boards cannot be used to fully fill cavities and you have to maintain a residual cavity on the outside, but even so you should be able to limit your cavity width to 125mm. On some sites, this extra 25mm of internal floorspace is going to be critical, so the new Part L is big news in commercial housebuilding. But, in truth most self-builders are not so constrained, so should not be put off by brick and block cavity wall building on this basis — unless building on a very tight site.

Traditionally, external timber frame walls were filled with mineral wool, but to get a U-value as low as 0.2 requires something extra if wall studs are to be held at 140mm width. There are basically two solutions available here. Add an additional 50mm of insulation on either the inside or the outside of the timber frame studwork, or switch to a more efficient (but more expensive) insulation. The large mineral wool manufacturers (Knauf, Rockwool) suggest the former; their plastic foam competitors (Celotex, Kingspan) go for the latter. In any event, it’s the timber frame manufacturers who will hold sway here and decide which is the most cost-effective solution.

Some modern construction methods already come with walling systems that have U-values lower than 0.2. For instance, most SIPs (structural insulated panels) walls will meet the new Part L requirements without alteration. Where the system needs adaptation – such as solid wall thin-joint masonry – the addition of plastic foam insulation on either the inside or outside face should suffic.

While Part L will make builders think harder about masonry construction, a wider cavity does not spell the end of the cavity wall. Last year, masonry package company Design & Materials introduced a wall system with a U-value of 0.18. The make-up is 100mm brick/stone/render on the outside skin, 100mm high-performance cavity insulation, 100mm aerated thermal block internally and 55mm insulated plasterboard. The company has also launched PointOne — a system with an overall wall thickness of around 500mm, including 200mm high-performance rigid insulation. It’s wide, but Dan Mutti from Design and Materials doesn’t think wide cavities are such a bad thing for self-builders: “Internally you’ll have a nice deep reveal and windowcill. It is likely to appeal to people with a bit of room on their site looking to invest in a super-efficient home.”

The Wall isn’t All…

A lot of research has been undertaken recently about just how well these energy-efficiency measures have worked in practice, and the results suggest that there is a wide gap between the theory and the actual performance. In particular, it has been shown that there are often large heat losses through air infiltration and via so-called thermal bridges in walls — junctions, window openings, service penetrations, etc. The latest Part L wants us to pay closer attention to these and has suggested that we start adopting building methods which minimise both air leakage and thermal bridging.

Hence in future, there may be a move away from the competing claims of rival manufacturers over the benefits of their particular walling systems, and a move towards adopting standard details which will in time come to replace Part L. Already you can download Accredited Construction Details (ACDs) from the Building Regulations website — but they refrain from stating just how much insulation you should be building in!