Over time, timber collects the patina of age on its surface and may show the marks of the craftsmen who originally worked it. This adds character, atmosphere and style, not to mention a sense of history to a home, so it’s important to think before rushing to treat, strip, coat or repair old timber. 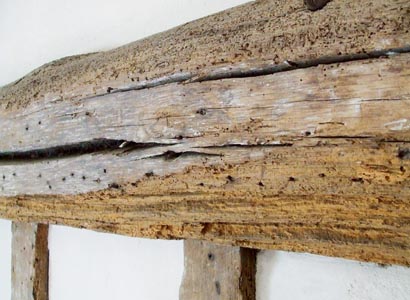 Stripping off old coatings is sometimes necessary where inappropriate finishes have been used or where successive layers are obscuring the detail of mouldings. Remember, though, that the ‘stripped pine’ look is historically inaccurate because softwood was invariably painted and only expensive hardwoods like oak and mahogany were left bare. There is no magic recipe for removing finishes but ‘Removing Paint From Old Buildings’, published by The Society for the Protection of Ancient Buildings (SPAB), offers advice. Always test a small inconspicuous area first and never use blow lamps, grit blasting, grinding or other abrasive methods which will destroy the timber’s surface.

Make Your Own Beeswax Polish

Beeswax polish can be made by grating a lump of beeswax into a jam jar and covering it with pure turpentine. Leave it to stand overnight and then shake well. The turpentine will dissolve the wax to produce a good polish. If the timber has worm holes, make the wax to a thinner consistency so it can be brushed into the wood, as it will help consolidate the damaged area. For waxing, use less turps to create a stiff polish to apply with a soft cloth. Several coats may be required. Never apply thick coats of wax, as it will remain soft and look dull.