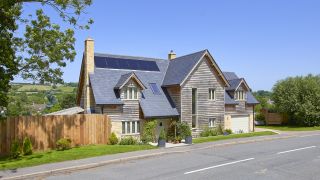 Including solar panels in a self build, renovation or conversion project is a readily-available way to improve your homes eco credentials. The most popular of renewable systems, solar PV (photovoltaic) panels are a quiet, low-maintenance option which is, generally, relatively inexpensive to install (in the terms of renewable technologies).

However, due to their required prominent position, usually on the roof, to achieve maximum efficiency, some house-builders might be hesitant to include this particular renewable and view them as an unsightly grey cherry on top of their dream home.

Here, we have collected some of our favourite projects who have dedicated their projects to fighting the good fight without negating their hard-won efforts of self build or renovation.

The builder of this house deliberately wanted an uncluttered external appearance so the panels neatly line up with the low-maintenance zinc cladding on the roof.

2. Angular Roof on Eco Self Build

Designed by Mitzman Architects and built by design and build company Potton, this timber frame self build was planned to be as ’green’ as possible, including a sedum roof, Polyflor LVT flooring (chosen for its A rating from BRE) and, of course solar panels.

Interestingly, the angular design of the roof allowed the solar panels to be added at the south-facing rear of the house at the correct angle, blending into the zinc cladding which details the eco-house.

3. Putting Solar to the Side

In keeping with the barn-style aesthetic of this self build, the homeowner decided to install their solar panels on the roof of the neighbouring annexe.

4. Blending Solar Panels with a Roof

The magnificent blend of contemporary and traditional in this oak-framed house meant the completely glazed gables had to be positioned facing north, allowing the more conservative oak-clad front to face south, perfect for adding a few solar panels. The local Cotswolds stone blends seamlessly with both the countryside surrounding and the solar array.

5. Cottage-style Self Build with Modern Technology

This house may seen to have stood for centuries, but CaSa Architects designed this self build with state-of-the-art sustainability credentials including a ground source heat pump, an air source heat pump and an array of solar panels as well as thermal solar.

6. Finding the Sun for Solar PV

With few external views to work with, this L-shaped house was designed to concentrate on creating dramatic internal views into a central courtyard. The wing containing the main living spaces was deliberately placed facing the sun while the roof was clad in Scottish slate, offering up the perfect spot to add their chosen renewables.

All the electricity for this self build in Scotland is generated by 15kW of ground-mounted PV solar panels (left of image). Surplus heat is stored in the thick concrete beneath the timber floors.

(MORE: Can Your Run a House on Solar Power?)

While renovating and extending their dated bungalow, the homeowners wanted to include various ecological features including geothermal heating and solar PV panels into their design and briefed their architect to make this a priority.

The result is an external cladding system of insulation panels which was combined with banks of solar panels and a ground source heat pump, making the house a net contributor to the grid.

9. Adding Renewables to a Wing or Section

This V-shaped self build includes a single strip of solar panels along the roof of one of the wings’ internal-facing slope. These, together with an air source heat pump, drive the underfloor heating throughout.

(MORE: A Guide to Renewable Energy)