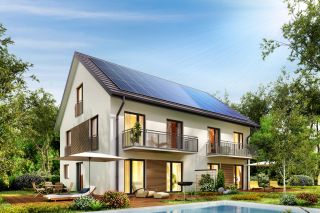 The sun delivers more energy to the earth in an hour than the world uses in a year, according to the US Government’s Department of Energy. An extraordinary statistic, but perhaps misleading in that the amount of energy actually available will vary with where you are in the world, the season, the time of day and the technology available to harvest it. Nonetheless, surely it should be possible to run a new home entirely on solar power?

Solar energy arrives here in the form of light and heat. We use technology to capture, magnify and convert it into useful purposes. As far as a house is concerned, there are three ways to do that:

There is a fourth to consider too — PVT. In basic terms, PVT is a hybrid solar panel consisting of PV and thermal functionalities. PVT panels can contribute electricity while heating hot water.

It used to be considered by many that the UK did not receive enough sunshine to justify investing in solar power. The recent proliferation of PV arrays on roofs and in solar farms has dispelled that myth and it is the efficient use of all forms of solar energy that makes the idea of the solar-powered house a viable possibility.

The one issue that could put the breaks on this notion – storing this power (solar power is generated in the day, which is not always when we need it) – is beginning to be resolved, too.

Get a quote for solar panels for your project.

How Much Energy is Enough to Power a Home?

This is a very good question, and an essential piece of information to feed in to the design process. We need to know how much energy the house requires before deciding how much we can or want to generate.

There are plenty of ‘UK average’ figures:

However, at best these are only a starting point. What is wanted is a detailed and accurate calculation of the energy demand based on the building and the people in it. This ideally needs to be completed by a specialist, as working out how much electricity is needed for lighting, appliances, etc, and so on is a tricky process.

These will be largely fixed amounts: we can choose to have LED lighting rather than tungsten filament and A+, A++ and A+++ rated appliances, but that is about as far as we can go.

It is the fabric of the building where we can have the greatest influence. The insulation and airtightness are important, but glazing, shading and orientation are also key issues that need to be looked at.

And then there is the question of balance: how much of the budget can be spent on renewable energy technology, how much on extra insulation and airtightness, and what are the rewards?

There are a number of ways of solving this problem and the three examples on the following pages give some idea of what is possible. Regardless of the route taken, the following projects all demonstrate that the solar-powered home is a practical option for self builders, regardless of budget or project size.

The problem with solar energy is that we have access to most of it when we want it least — in the daytime and in summer.

While PV and solar thermal panels produce either electricity or heat, PVT (photovoltaic thermal) panels generate both. They look like PV panels but have a heat exchanger on the back.

We assume the bright sun of summer will be best but PV panels are actually more efficient in cold sunny weather; as they get warmer they become less efficient. The panel loses around 0.5% efficiency for each 1°C over 25°C. PV panels can hit 70-80°C in bright sunlight, meaning a 25% loss in efficiency at those peak times when they should be generating most.

Editor's Note: Homebuilding.co.uk partners with the UK's best solar panel suppliers to match your requirements with their products. Simply answer a few questions on what you need from your solar panels and we’ll put you in touch with a suitable partner.

The recent proliferation of solar farms has put pressure on the national electricity grid with a surge in electricity generation in the daytime. An innovative solution to be trialled in Wadebridge, Cornwall, is to encourage householders to change their habits by offering low-cost electricity in the daytime.

The Sunshine Tariff, provided by Wadebridge Renewable Energy Network, will be offered to residents with a rate of 5p/kWh between 10am and 4pm from April to September and a higher rate of 18p at all other times. The trial will use smart metering technology to see how much customers could save by changing their electricity usage patterns to take advantage of the low daytime rate.