Tiling a Roof: How Much Does it Cost? | Homebuilding & Renovating Skip to content

The choice of roof covering can have a significant impact on the eventual look of the home. And yet, in the initial stages, much more attention is lavished on the layout and the external cladding of the walls. However, it is the roof that makes an enclosure into a home and the choices tend to reflect the region in which the home is built.

Of course, there are many forms of roof covering, from the traditional thatch to the more contemporary sheet roofing; not to mention green roofing, which is taking up an increasing chunk of the market. Nevertheless, for most self builders the choices revolve around plain tiles, interlocking tiles and slates.

Shop roof tiles for your project

The costs set out below relate to a modest L-shaped bungalow with a roof area of around 180m2 and with one valley, hip and ridge tiles, and a universal dry hip and ridge system. To simplify the comparison, the same clay ridge and hip tiles are specified.

In Scotland, a layer of sarking decking is required over the trusses and beneath the underfelt, necessitating counter battening down the roof.

These are the small – usually 267x165mm – rectangular tiles that give so many country properties that distinct feeling of mellowness. Traditionally they were made of clay and they often had a camber naturally built into them in one or both directions, causing them to lie slightly unevenly. Modern versions in either clay or concrete can mimic this, but the older and more traditional tiles are still available — albeit often handmade and, therefore, much more expensive.

This is the cheapest roof covering option and it is the one that many volume housebuilders default to for that very reason.

Once again, there are many versions both in clay and concrete with some that mimic traditional single roll pantiles, some that emulate (without close inspection) the flat planes of slate roofs and then there are others which unashamedly present a profile in their own right.

Just because they are the cheapest option, doesn’t mean that they don’t have a place in self-build, particularly where many infill plots have to fit in with existing styles and choices of materials. 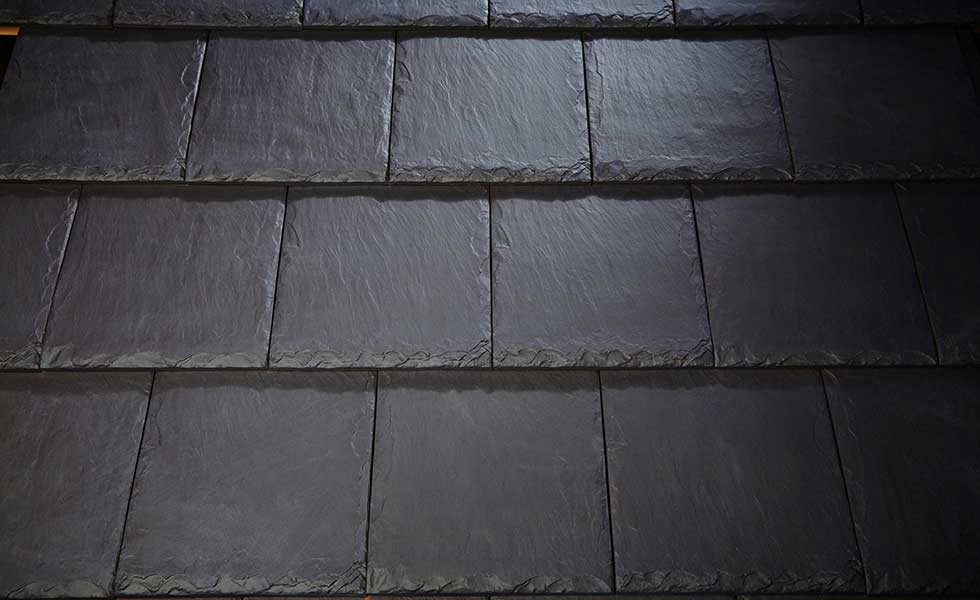 Wienerberger’s Rivius clay roof tile (coloured to look like slate) reduces labour costs as they are 10 per cent larger than plain tiles and interlocking. Coverage is 9.5 tiles per m² and the cost is approximately £1.40/tile, totalling £13.30/m²

The waterways and canals of the Victorian era made the transportation of slates from the Welsh hills much easier and their use and popularity grew. Today, they are still one of the most popular forms of roof covering, despite the fact that only a tiny minority come from Wales and the rest of the UK.

Natural slates are now imported from China, Brazil and Spain in colours that can closely follow the traditional, and much more expensive, Welsh equivalents.

Natural slates, like plain tiles, do not have any drips or contours and therefore have to be laid in such a way that every part of the roof is covered. This means that at some points they may be treble lapped.

Manmade slates are also available — those that directly mimic natural slates are no cheaper but are perhaps slightly more durable. Others conspire to look like natural slates, while actually being interlocking; whether they ever achieve their goal of looking like the real thing is debatable.

(MORE: What are the options when it comes to roof coverings)

Flat roofs tend to be priced on a supply and fit basis with some packages (e.g. single ply) including build-up, insulation, etc. as well. This all means comparing like for like is tricky. However, here are the headline prices for those wishing to put something in their budget at an initial stage:

How to Build a Roof