Twenty years ago, virtually everyone building a new home or an extension used timber windows. They arrived on site as bare frames, with just a base coat of stain applied to them. These frames were then fixed into the walls as the building went up, and the glazing was carried out weeks later, usually just before the scaffolding was taken down. Sometimes it got overlooked and ended up being done off a ladder a week or two later. Back then, the glazing was just a single pane: anyone fitting double glazing would have had to be building an eco house. After the glass was fitted, the sole question was whether to paint or stain the frames.

Meanwhile, over in suburbia, things could not have been more different. There a replacement window boom was in full swing. Replacement windows were almost always plastic — technically PVCu. These windows sold themselves on adding value, comfort, efficiency (by virtue of being double glazed) and offering a maintenance-free product.

Unlike the new build market, where designers and builders were all used to working with standard openings into which manufactured frames could be easily fitted, the replacement window manufacturers were all producing made-to-measure products, which made them rather more expensive on a like-for-like basis, and thus effectively kept them out of the new build market. So the two markets, new build and replacement, remained more or less separate.

However, a change in the Building Regulations in 1990 at last made double glazing mandatory in new builds and extensions and much of the cost advantage enjoyed by the timber window suppliers vanished overnight. For the timber window manufacturers, it got worse still. It turned out that fitting double-glazed sealed units into bare frames on site was a distinctly hit or miss affair and soon the NHBC, the housebuilders’ main warranty provider, was swamped with complaints from angry new homebuyers about their windows misting up, only to find out that the NHBC warranty didn’t even cover glazing defects. Ouch.

Not surprisingly, the major housebuilders abandoned timber and switched en masse to pre-glazed plastic windows. It was a move many of their customers approved of in any event, as they liked the idea of maintenancefree windows. Manufacturers such as Speedframe then set up shop to cater for this new market and started to make plastic windows in long production runs, designed to slot into the standard opening sizes beloved of the UK housebuilding industry.

But all was not lost for timber windows. In 1998, the NHBC at last brought glazing failures within their warranty scheme, but with some very strict conditions. No longer would they tolerate sloppy glazing-off-a-ladder-withsome- putty stuff, but insisted that glazing should be housed correctly in the frame and that the bottom rail should be drained and vented, to avoid moisture build-up. By far the easiest way to do this was to glaze in the factory, not on site, and this was the catalyst to change the way timber windows were supplied.

You can still build timber window frames in the old manner, but it’s not to be recommended. As Keith Topliss of Howarth Timber Windows says, “90% of the problems we have with glazing units stem from the 10% of our market that still uses on-site glaziers. Misting up on factory-glazed windows is now so rare that it’s virtually a thing of the past.” So rather than having two different window industries, as we did in the 1980s, we now tend to have all windows supplied the same way.

However, factory glazing is still not without its issues. The product is essentially pre-finished before it arrives on site and so is liable to damage in transit, as well as during and after fitting. It makes sense, therefore, to fit the windows in as late as possible in the build programme, ideally after the external cladding is complete. This has led to the use of various sub-frames which are built into the wall and act as housing for the windows, often allowing them to be fitted from the inside.

So bear in mind that there is a lot more to it than choice of material. Ask questions about how the windows are fitted into your walling system, and at what stage they are best fitted. Do they use proprietary sub-frames and if so are they compatible with your build methods? Generally made-to-measure windows are between 20-30% more expensive than ones made for standard British openings. As a rule, imported windows have to be made to measure for the UK market.

Your local builders’ merchant will stock a good range of standardsize windows at quite competitive prices, so if you’re not looking for something out of the ordinary then this is a good place to start. Joinery merchants tend to publish price lists and then offer a 30- 50% discount to entice a sale. If you require something more specialised then you will have to negotiate directly with suppliers. Local joinery shops are well worth a look but they can be a bit slow and expensive. Imported windows are probably the most expensive and you may have to pay upfront. When ordering your windows take note of lead times, which can be many weeks — causing disruption to the build programme if not planned well in advance.

Timber or PVCu?… Spot the Difference 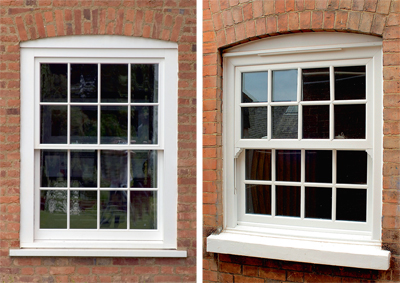 A keen observer will spot that the left-hand sash window is the timber version (from Mumford & Wood) and the right is of PVCu (from Eurocell). The finer glazing bars are the biggest giveaway. However, it does go to show that PVCu can be used to mimic wood — and at a much cheaper price. This covetable timber window will set you back around £1,175, yet the PVCu version costs from just £200. Timber is very durable — if taken care of it will last for centuries, though it will require periodic maintenance. PVCu is very low-maintenance but cannot be repaired as easily, so its longevity is not as good.

In order to keep costs down, manufacturers use a modular approach to window openings. Window heights tend to step up in 150mm intervals (two brick courses) whilst the standard widths for casement windows are set at 630mm, 1,200mm and 1,770mm, though some intermediary widths are available. If you vary from a standard size it will immediately add a 20-30% premium. Imported windows tend to be more expensive as they are either made to measure or follow a foreign size convention.