Most large-scale projects are by definition a ‘labour of love’ because of their size and the sheer passion of the owners.

This is something that Jennifer Patrick knows all too well following the transformation of her and husband Robert’s holiday home, Pheasant Cottage. Robert hails from Edinburgh and Jennifer is from Liverpool, but both fell in love with Perthshire.

“I love Dunkeld and this area, so when I was looking for a property, I wanted it to be within 50 miles of our main home,” says Jennifer. “When I spotted this property, it was the outside that piqued my interest, even though inside the layout wasn’t great. It’s a beautiful, traditional cottage with great views and good space out the back. 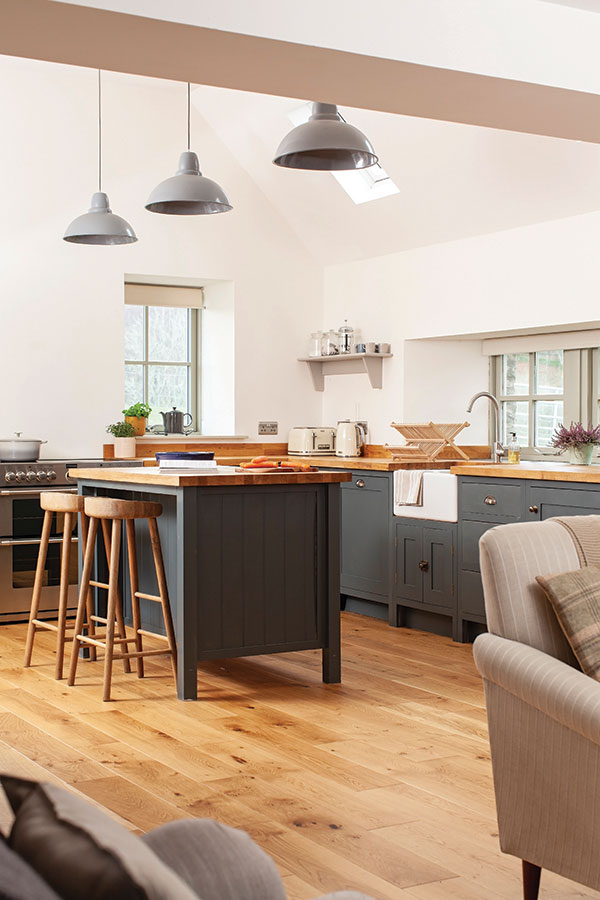 “Robert pretty much didn’t get a say,” laughs Jennifer. Two weeks after viewing the stone cottage, Jennifer and Robert put in an offer, and work quickly began on transforming the internal spaces.

The couple originally bought the property to be their permanent home, but later decided to rent the cottage out as a holiday let, so sorting out the layout was important. “It was the views that sold us on the cottage and we wanted to make the most of these,” says Jennifer.

“So we decided to open up the space inside as the original layout was dark and the rooms were very small. We started from the front and added on the porch which gives boot space and extra storage.” 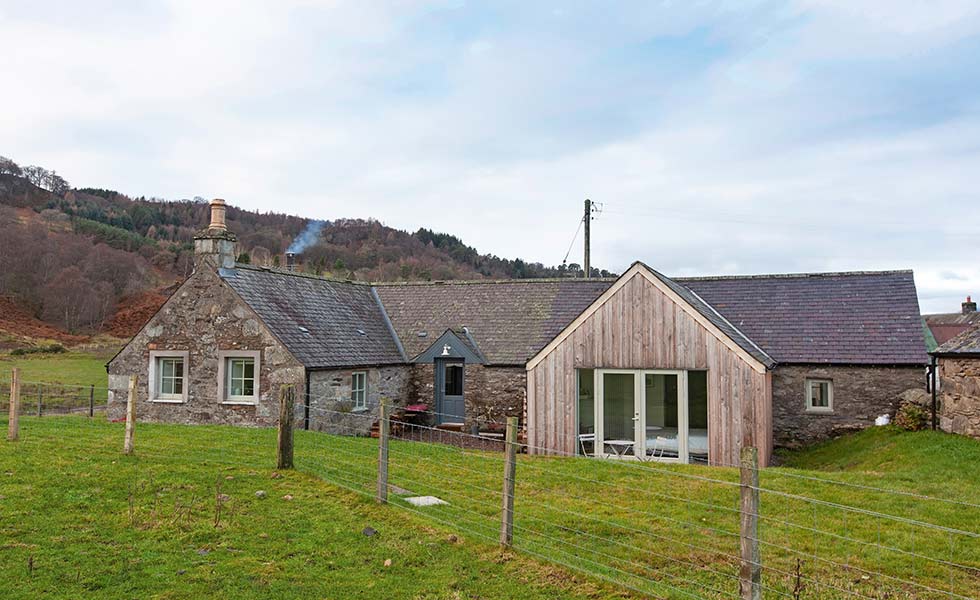 The existing stone cottage was very traditional in form, but required an update. As well as the rear extension, a porch was added to create separation between the outdoors and the open-plan living space

As you step into the house, the original living room area was situated to the right. It was a stand-alone room that was quite small, so we took down the supporting wall in the living room to open it up. We then had to put in a steel beam to secure the roof.”

The couple also removed walls to incorporate a cramped bedroom on the ground floor that was too small to function well as a separate room. Doing this created an even more generous kitchen/dining/living space. “The cottage was originally a three bedroom property, but we have reconfigured it to make it a more liveable space,” says Jennifer.

Removing the main living room wall and opening up that space served a dual purpose, as it minimised the cottage’s original long, dark hallway that led to the bedrooms. 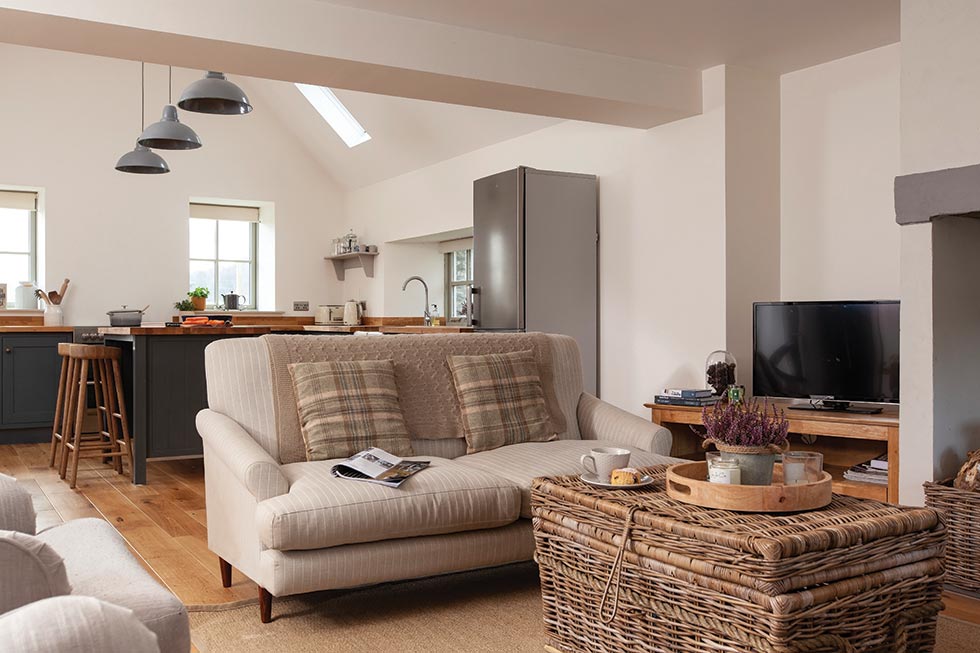 The couple also removed walls to incorporate a cramped bedroom on the ground floor that was too small to function well as a separate room. Doing this created an even more generous kitchen/dining/living space

In the kitchen, the couple chose to vault the ceilings in order to create the feeling of space and give it a country-style feel.

“I have a slight obsession with the kitchen brand deVOL, so that’s what I was hoping to model the kitchen on,” says Jennifer. Robert then designed and built the new kitchen in her preferred style. Next, the couple turned to the rear of the property.

“The views over the countryside and the hills from the back were too good not to take advantage of,” she says. “So we opened up the rear of the house and added a couple more windows. This was quite a hard job as the stone had to be taken out without causing the roof to come in.

“We also wanted to put in an additional bathroom so we had to work out how to do that. That’s when we came up with the almost U-shaped design, which includes an extension at the back.” 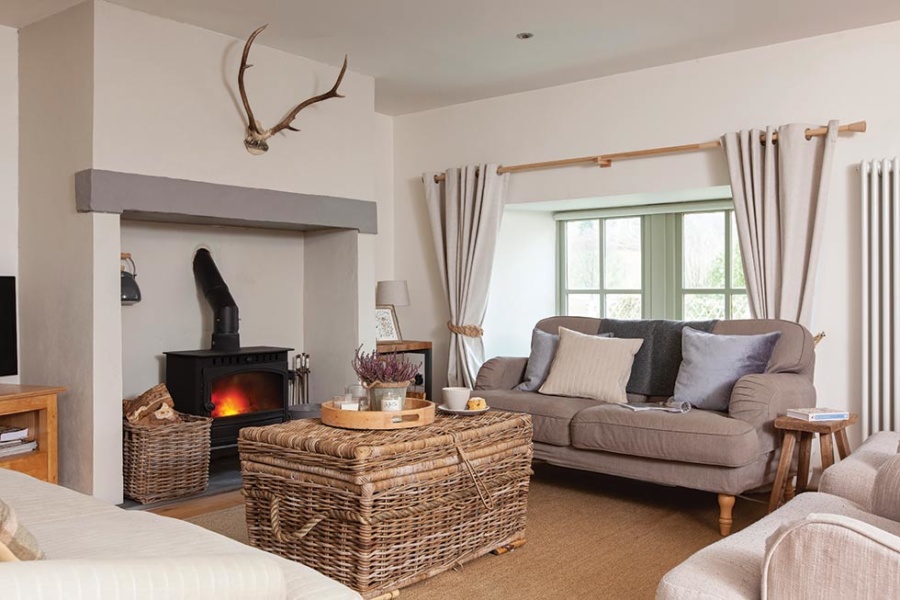 The couple knew they wanted a woodburner, which keeps the open-plan-living/dining room cosy. This model is from Hunter Stoves

Extending allowed the couple to re-introduce a third bedroom with an en suite (having lost that small ground floor bedroom when creating their open-plan kitchen/dining/living area).

What’s more, the introduction of the master suite extension not only gave the couple the extra bathroom they were after, but allowed them to create a bespoke space with French doors offering rural views.

One of the obstacles faced during the project was the location itself. Situated in a small village, near Dunkeld, the cottage is accessed via a narrow, uphill, single-track road. This made the building work, especially the removal of debris and stone, something of a challenge.

“One of the biggest jobs during the renovation was removing the supporting wall from the living room, which was about a metre thick and made of stone,” recalls Jennifer. “One of the local farmers was kind enough to loan us a digger and a trailer. 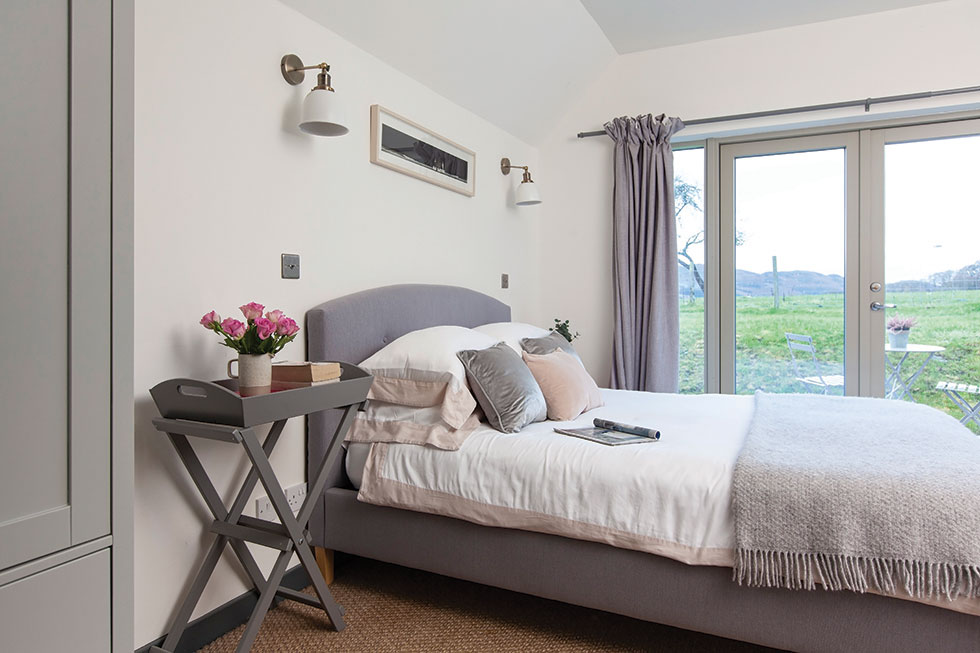 We filled the trailer over and over again with stone and all sorts of rubbish that needed to be taken away from the property.”

With the layout and construction challenges tackled, Jennifer could turn her attention to the interiors  the part of the project that she enjoyed the most. “I got a lot of inspiration from Pinterest, and I knew I wanted Farrow & Ball paint on the walls,” says Jennifer, who favoured understated chic with a touch of Nordic charm.

“Finding the furniture and accessories, and deciding on the colour scheme was definitely my favourite job. I’ve mixed high street buys, such as the living room furniture which we sourced from Ikea and Marks & Spencer, and paired these with online purchases from Made.com [including the dining table and bench]. 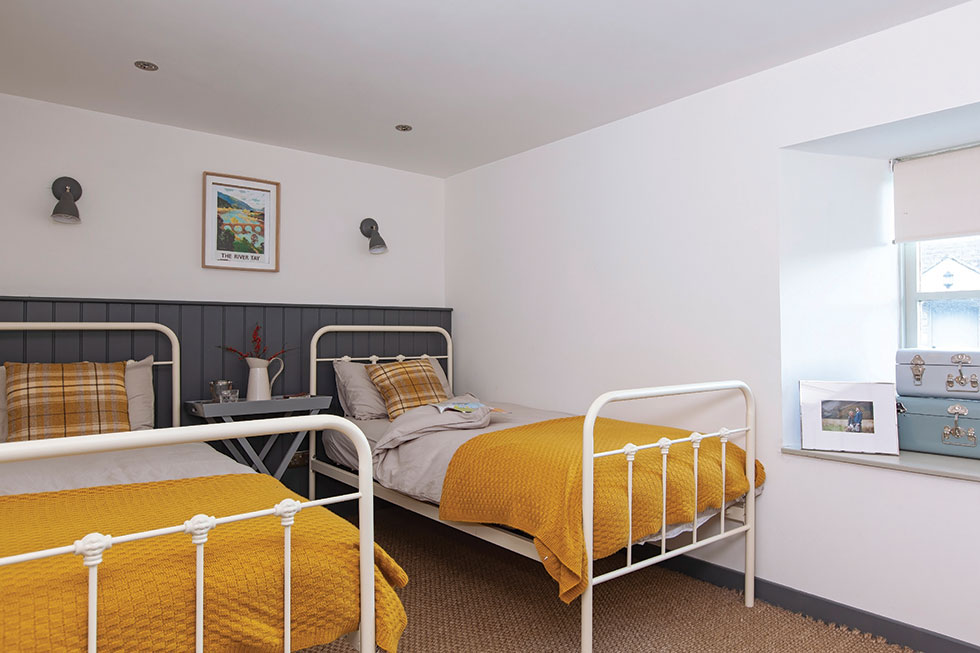 Elsewhere, the size of the twin bedroom has been increased during the project

“We also included some vintage finds, such as the dining room dresser (from eBay) and the rocking chair in the master bedroom.” The existing two bedrooms have had decorative changes, with shades of grey on the walls, and the main bathroom has been updated with new sanitaryware and tiles.

The couple (who met at music festival ‘T in the Park’) managed to organise their wedding while completing the cottage renovation. “It was a hectic year and we have achieved a lot, but it was quite testing,” remembers Jennifer.“ I am so lucky to have got on so well with our builder, who I think thought I was mad!”

“My dad also gave up fishing for the whole summer to come up here and spend his weekends working on the property. He camped in the back garden — I am sure the cows in the neighbouring field wondered what he was doing!”

But, as the saying goes, ‘hard work reaps rewards’, and the couple have definitely done just that, and can now enjoy the benefits of their beautifully renovated and extended home.