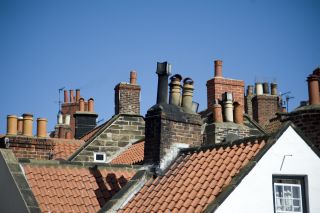 Chimney systems not only add a great sense of character to a home, but are also essential if you plan on enjoying the cosy benefits of a woodburning stove. This guide will explain all you need to know about chimneys and flues and how to make sure yours is working to its full potential.

Why do We Have Chimneys?

Although holes in the roof and walls of ancient homes is evidence that our ancestors knew it was important to get smoke out of their homes, chimneys were not really widely adopted until the Tudor times, and even then, only by the upper classes, with more common folk having to put up with smoke-filled rooms.

Even when chimneys were used, they were highly inefficient and often dangerous too, being made of wattle and daub and susceptible to fire. By 1710, all clay-built chimneys in England were ordered to be rebuilt in brick.

However, a poor understanding of heat and smoke meant that chimneys were still not drawing in the way they should, and it was not really until the mid-18th century when the likes of Benjamin Franklin (once called ‘The Universal Smoke Doctor’), Charles Willson Peale and Benjamin Thompson – later known as Count Rumford – got involved that things improved.

Count Rumford invented a fireplace and chimney designed to reduce the smoke pollution in London. The new Rumford fireplace reflected heat back into the roof, with the chimney being incorporated into the wall.

How do Chimneys Work?

Jonathon Greenall from Clearview Stoves, says, “You can run a bad stove on a good chimney but not a good stove on a bad chimney. That’s how important it is that a chimney works properly. First, you need to know what makes a chimney do its job. In other words, why does the smoke go up the chimney rather than drift out into the room?”

The upward movement of air and smoke in a chimney is known as the draft. Draft takes place because of the physical fact that hot gases are less dense than cold gases. Heated gases in a chimney are lighter than the air in the atmosphere and are, therefore, drawn up into it.

Logic suggests that a taller chimney produces more draft because of the simple fact that there tends to be more of this hotter, lighter gas in it, which creates more updraft. However, the increased draft inherent to a taller chimney tends to be offset by the greater friction found in the chimney and by the tendency of the gases to lose their heat as they rise.

Another fact of physics has an impact – albeit a lesser impact – on chimney performance. As air is blown over the end of a tube, a drop in pressure is created at the end of the tube. This principle was first discovered by an Italian, GB Venturi, almost 200 years ago and is the principle by which most carburettors inject petrol into the air stream. Wind blowing over a chimney has a similar effect, adding to draft.

For a chimney to work well, it requires a good flow of air and for the flue to maintain as high a temperature as possible, so there are exacting Building Regulations about chimney design. For instance, it’s important for chimneys to be insulated, as this keeps the smoke warm and lessens the chances of it condensing as tar deposits. This is particularly important with woodburning appliances, as they burn cooler than coal.

The terms ‘flue’ and ‘chimney’ are often confused. The flue is the working section of the chimney which takes the products of combustion up and out into the atmosphere, while the chimney is a structure built around a core of clay or concrete flue liners, terminating with a pot (see Anatomy of a Chimney below).

Chimneys are categorised into ‘classes’.

Factory-produced pumice, clay and ceramic chimney systems can be retrofitted, but they tend to be reserved for new builds as they require foundations and their construction is really best left to a skilled bricklayer.

The Anatomy of a Chimney

NB: The diagram below dissects a masonry chimney with one flue. A chimney may in fact contain more than one flue, and its type is dictated by the heat-producing appliance required. To open up an old chimney, the flue must be cleaned and inspected by a professional chimney sweep, and possibly relined to meet regulations.

The Importance of Ratio

For an open fireplace to function properly and for the chimney to draw, the ratio between the chimney and fireplace needs to be exactly right. Flues above 6m tall should generally be not less than 1/7th to 1/8th of the area of the fireplace opening, e.g. a 225 mm (9″) diameter flue will support a fireplace opening up to about 550 x 550 mm (22″ x 22″) (see Building Regulations J 2.2.)

For bungalows, the ratio should be reduced to 1/6th.

A major advantage of precast fire chest and chimney flue systems is that the ratios have been carefully worked out and so are guaranteed to function properly.

If you are building a new chimney, take note at what works for the surrounding properties. They will already have been built or adapted for the local environment.

When fitting a liner, joints should have their male spigots facing down. The idea is not to make sure all the smoke goes up it will if joints are properly sealed but that water running down gets right to the bottom where it will be boiled away again.

How Much Will it Cost?

Material costs for a new chimney start at around £1,000 and can spiral upwards depending on the design. However, there is generally a considerable labour element.

The budget option with a woodburning stove is a prefabricated stainless-steel flue. Whereas a gas-burning appliance can use a single-skin flue, with solid fuel you have to use an insulated twin-wall flue section in order to stop the smoke condensing inside the flue. Typical material costs for a 7m twin-wall stainless-steel flue are around £1,300-£1,500. Main manufacturers are Rite-Vent, Poujoulat, and SFL.

Ceramic twin-wall flues are a more upmarket option, and are 30-50% more expensive than stainless steel. Ceramic flues tend to come with a 30-year guarantee (rather than ten years for stainless-steel flues). They’re recommended for heavy use, especially with biomass boilers.

Pumice stone prefabricated flues provide a very simple way of building a long-lasting, insulated masonry chimney system, at a similar cost to a twin-walled stainless-steel flue. Instead of having to source components from several different suppliers, these chimney systems are supplied as kits for easy assembly. Names to look out for here are Isokern and Anki.

In short, chimneys require foundations while steel or ceramic flues don’t. If you want a traditional pot, then you need a chimney, as flues have terminals instead. While flues work with any construction type, chimneys work best with blockwork.

The main cause of smoke coming into the room from an existing chimney that once worked is a blocked flue. The solution is to get the chimney swept. Insufficient air coming into the room can also cause blow-back. Bear in mind that, traditionally, houses had lots of draughts while today they are often too airtight for an open fire.

If you don’t give the fire sufficient oxygen, it will find its own, pulling great gulps of air down the chimney and belching smoke out into the room. If necessary, add a vent to an outside wall adjacent to your stove or fireplace.

Many people will want to keep an existing chimney and adapt it for use with a woodburning appliance. You need to check that the chimney is functional and adequate — a chimney sweep should be able to help here.

Most gas fires can be installed using a through-the-wall balanced flue, just like a gas boiler. You can also used powered flues, which allow you to duct the exhaust gas over longer routes incorporating bends. This enables you to place a gas fire away from a suitable external wall.

Thanks to Jonathon Greenall and Helen Davis at Clearview Stoves for their practical advice regarding flues.