When Karen and Shaun Harley bought their three bedroom home in the suburbs of Leeds it was the perfect size for them and their young son.

But the arrival of their daughter brought with it the realisation that the house would be tight for space as the children got older. They faced a dilemma: to move house or adapt the home they already had.

“We looked at other properties and soon realised we had everything we wanted right here — except enough space,” says Karen.

“Even though the houses we looked at were bigger, all of them would have needed extensive work and a change of layout to suit our needs. In the end we decided it would be better to stay put and extend the house we already had. We would have the best of both worlds — a bigger home without having to move away from a community we really like living in.” 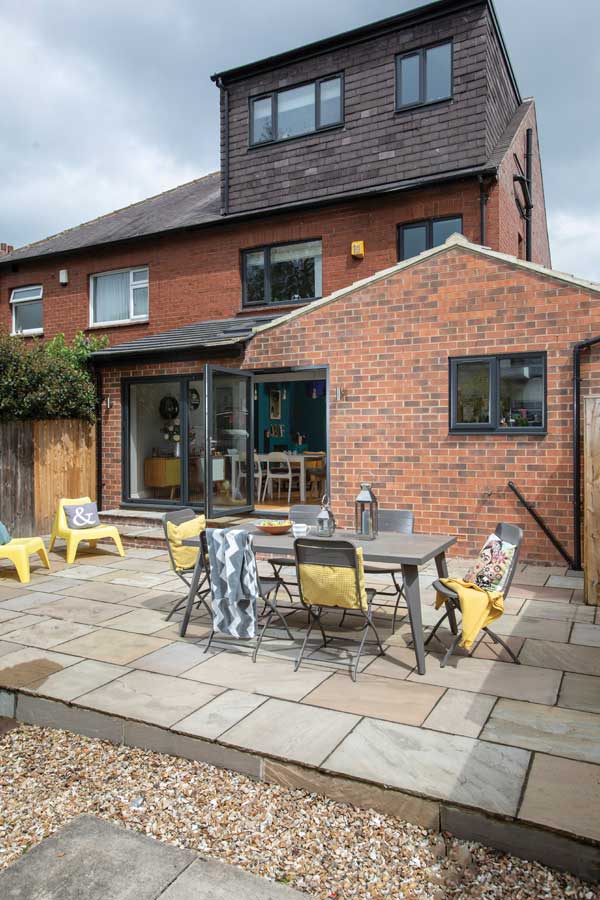 The extension wraps around the side, the extra space making a big different in the flexibility of the kitchen. The Harleys also opted for a loft conversion to create a new bedroom at the same time

They began by working out how they wanted to change the way they lived in the house and where the focus of family life would be. The old kitchen was tiny and the ground floor featured a series of small rooms which often left the family segregated.

Karen and Shaun wanted to knock the ground floor into one large living space, creating an open-plan kitchen/dining/sitting room opening out onto a patio. At the same time as the extension, they also decided to extend into the loft to create a fourth bedroom so that everything was done in ‘one fell swoop’.

The Harleys’ extension did not fall under Permitted Development and needed planning permission because it was changing the aspect of the house by going out to the side. 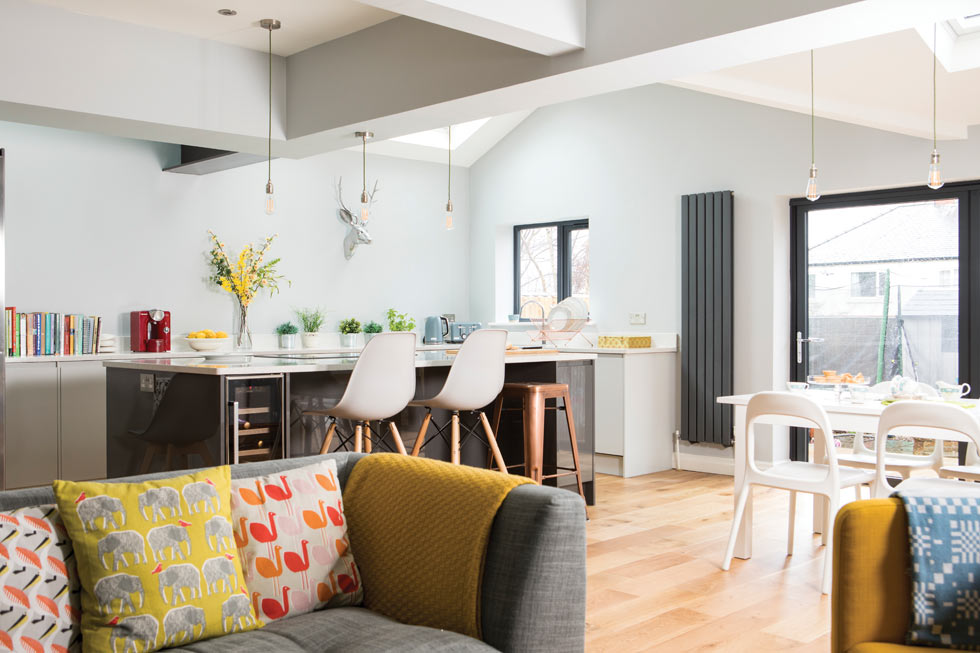 The Harleys have used colours and furniture to demarcate areas and create separation in the open-plan living, dining and kitchen areas

“We decided to extend sideways as well,” explains Karen. “If we were going to go to the time, expense and upheaval of a major renovation, we had to make sure we did everything right and achieve the results we really wanted.”

The family lived in the house while the work was done, setting up camp in the sitting room where they prepared family meals using an induction hob and slow cooker.

Before work began they met with no less than 15 builders before choosing someone who would work closely with Karen to achieve the design they wanted. 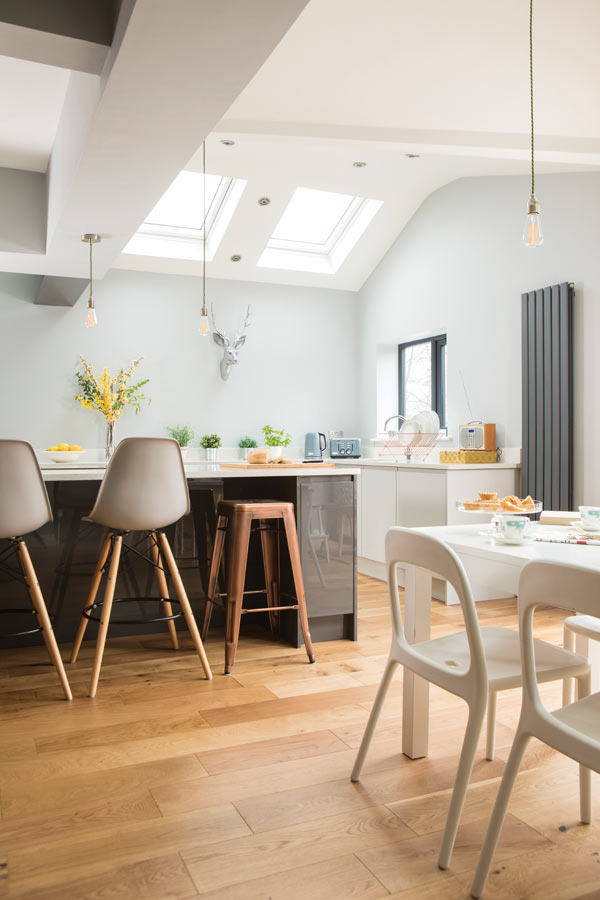 The Howdens kitchen is designed without wall units to emphasise the openness of the redesigned ground floor. The pitch roof extension includes Velux windows and the side elevation to avoid having a window overlooking the neighbours

“They had to be respectful of us and our home,” says Karen. “I am direct and wanted to employ someone I could have a good working relationship with as I would be the one spending most of my time on the project. I was on site every day overseeing everything, so good communication was a key consideration — as was turning up on time, keeping us informed of any changes to the schedule and bringing their own portable toilet.”

Work began on the foundations for the main and side extension, quickly followed by the brick and block walls and the roof to make it watertight before the original back wall was demolished to open up the space. A steel beam was fixed into the opening to support the back elevation of the house, along with a steel in the new extended kitchen area where there had originally been internal walls.

(MORE: All you need to know about knocking down internal walls) 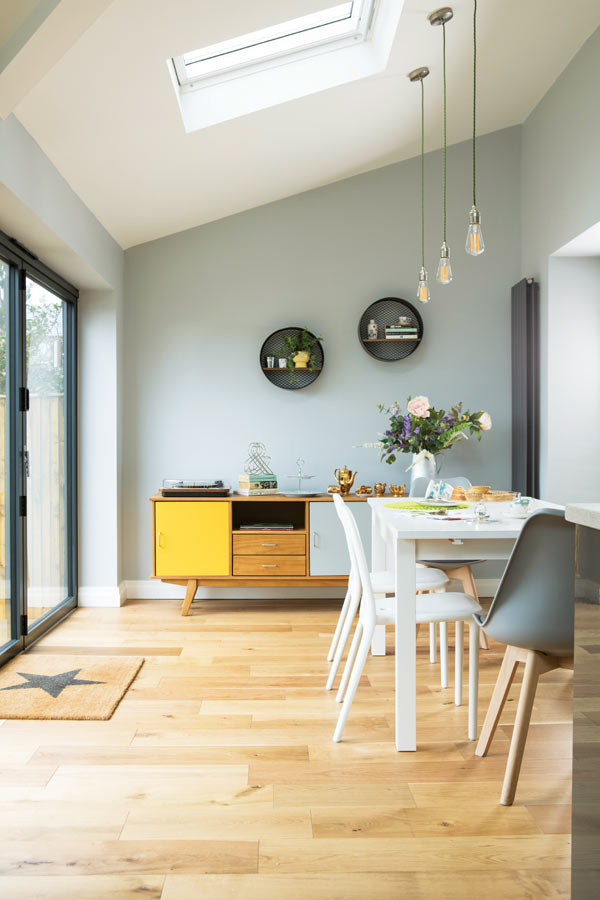 “The structural engineer advised the builders to use a bigger steel than they had calculated for to be on the safe side,” says Karen. “Once the wall came down we had to move into the front of the house while the extension was plastered out, plumbed and wired. The team of builders was fantastic. With young children around I had to have access to the washing machine and fridge every night, so they made sure these were easy to get to. It was just a case of being organised.”

“Wall units would have made it feel cluttered so we kept everything very simple and streamlined,” says Karen. “We also wanted bold colours and eventually settled on Dulux Goosedown Grey on the walls and a Dulux special mix for the bold accent turquoise in the sitting area. 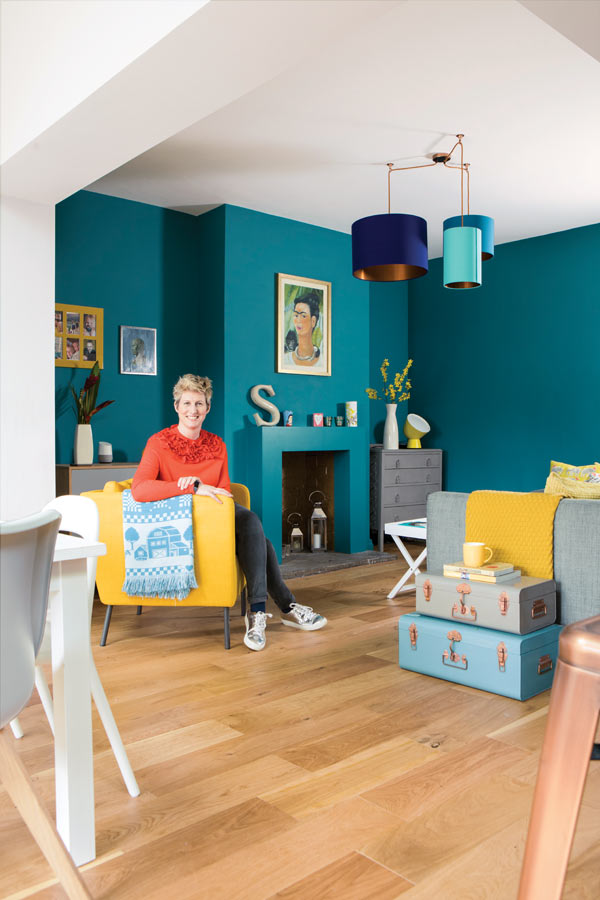 “In an open-plan living space it makes sense to define each area with colour,” she continues. “The sitting area is where we tend to spend most time in the evening, and also the area which gets least natural light, so we wanted that to be cosy and welcoming. The kitchen and dining areas are light and spacious and link directly to the garden, which is really practical — especially in summer when we open the bifold doors.”

To this end, the kitchen extension, along with the converted attic bedroom, has completely transformed the way Karen, Shaun and their children Flint and Betty use and live in their home.

“Before this, the house felt quite fragmented with lots of small rooms,” says Karen. “Now it’s light, modern and open which means we spend much more time together as a family, even when we are all doing different things. It was definitely the right thing to extend rather than move house to achieve more space. Now we have the best of all worlds.”