Mark and Julia Swannell (and their children Poppy and Simon) moved from Bedfordshire to north Shropshire in 2000 after spotting a Georgian home for sale.

The couple had recently built a holiday cottage in the area, and although they never intended to move to Shropshire permanently, they fell in love with the location they spotted on one of their weekend breaks.

They spent the next ten years giving the house a complete makeover, but unlike many who update their homes, they have taken theirs back in time — a Tudor-style house, complete with a jettied porch and synthetic masonry now sits proudly in this rural idyll. 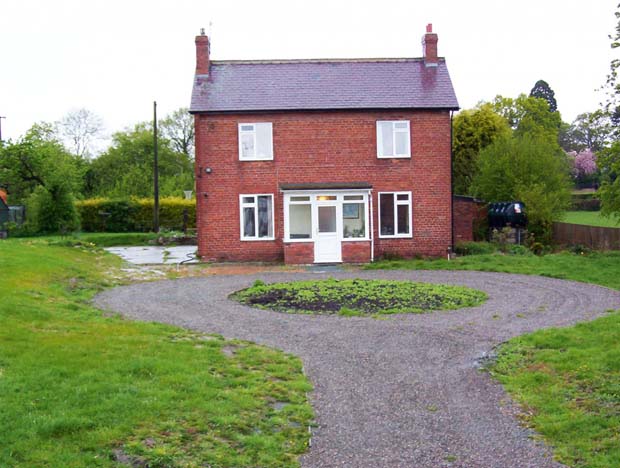 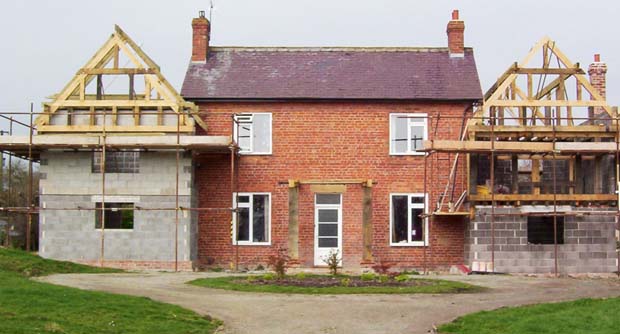 Here, the blockwork extensions and oak frame roof are being constructed

Mark and Julia had built their own home back in Bedfordshire and were happy take on most of the work themselves. Mark, who was originally trained as a joiner and has a number of renovations under his belt, was able to use his experience drafting the plans and designing.

They knew they wanted to live in the house as they worked on it, so he built the first extension to one side which would allow them to still use the other half of the home. To lower the height of the house visually, they then came up with the idea of steep roof pitch and jettied landing. This landing would then connect the second extension and a symmetrical Tudor-inspired home idea was born. 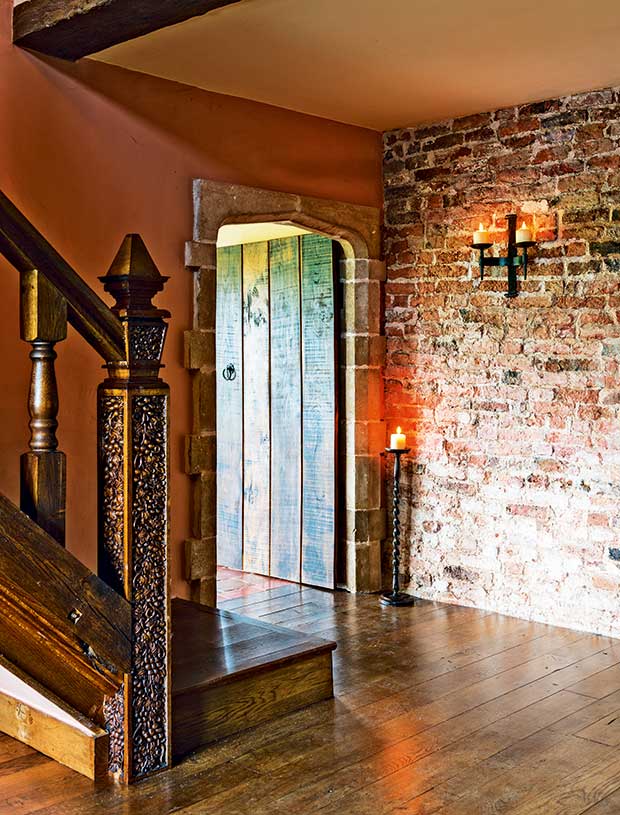 Each wing is three storeys with a two storey section in the middle for visual balance. One wing houses a ground floor living room, first floor kitchen and snug and two bedrooms and a bathroom. It has it’s own entrance and can be used as private living space for visitors.

The other wing contains a large light-filled kitchen on the ground floor and a master bedroom with en suite above. The original part of the house is home to the dining room, hall, two more bedrooms and a bathroom. There is also a cloak room, utility, office and even a bar. 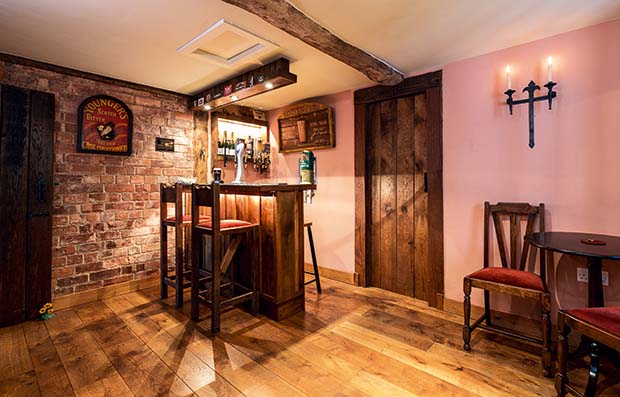 The mock-Tudor exterior finish has been created with some clever mimicry from Mark (more on this later). Inside, he has used similar methods to create a warm traditional atmosphere in the living spaces. It is complimented with refined, contemporary features throughout. 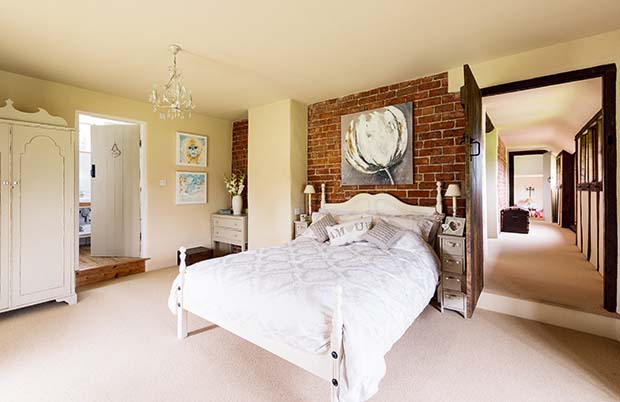 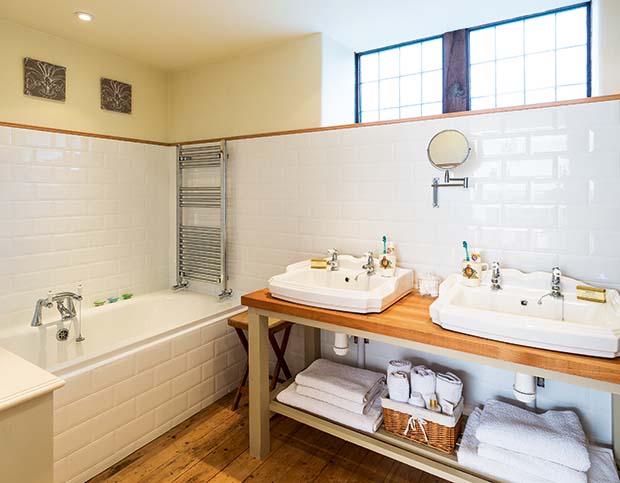 The planning officer didn’t like their plans and planning ended up going to committee level. The committee arrived on a minibus to visit the site, and they were fortunately granted permission shortly after.

Mark took two years out to start work on the project. He poured the foundations single handedly, then build the blockwork extensions in turn and laying the new slated roof. He then moved on to fitting out the first extension while the family could still use the rest of the house.

Early on, the family invested in a JCB digger, meaning he could do heavy lifting alone (such as the oak for the frame) and get around the problem of transporting deliveries to their site. The narrow lane was not suitable for HGVs so materials were craned over the hedge and they could use the digger bucket to move them. 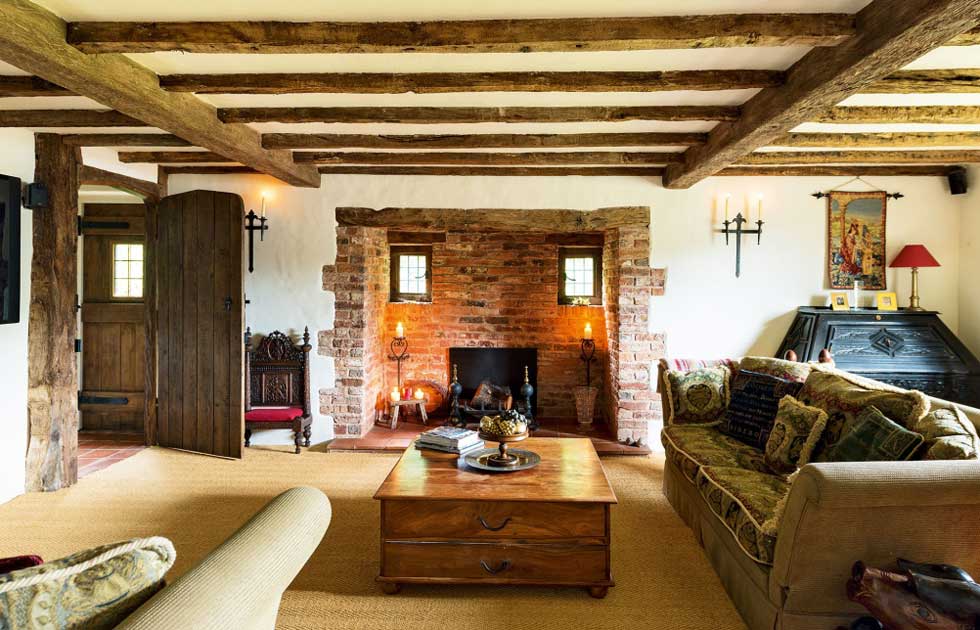 Once the structure was complete, Mark set to creating replica Tudor features. He handcrafted the doors and casement windows, creating ‘sandstone’ surrounds out of moulded cement blocks which he had weathered under a tree. Another stroke of ingenuity was plastering the steel beams and printing them with a handcrafted wood-effect roller to make the exposed ceiling joists. 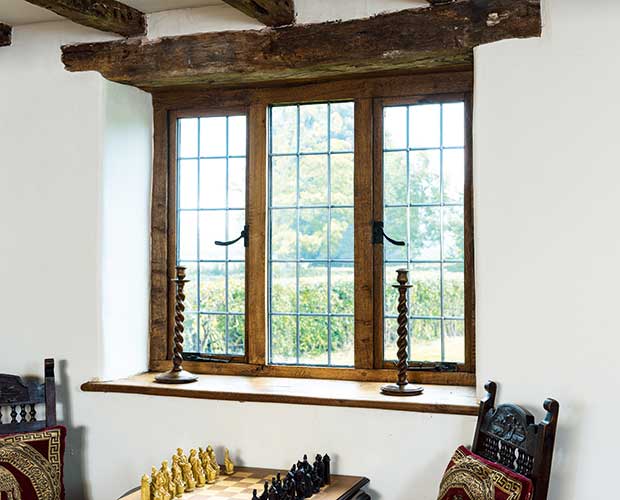 Attention to detail is the key to this home’s success. There were a number of great eBay finds, such as the staircase newel posts sourced from the gatehouse of Gwrych Castle in Conwy.

The home is now barely recognisable — brick from the Georgian house is just visible below the jettied porch, showing its origins. Sitting amongst expansive green lawns, beside a large duck pond and established vegetable patch this country remodel looks right at home.