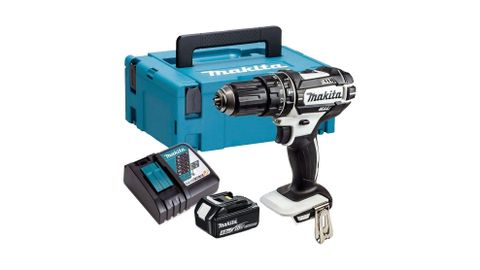 There’s little to complain about, and this robust combi drill from Makita is equally at home helping out with DIY as it is surviving the rigours of wet, dusty job sites

Makita has a huge range of cordless combi drills, drill/drivers, and impact drills in various voltages to suit virtually every situation. The Makita DHP482M1JW is a general duty 18V combi drill and was supplied with a 4.0 Ah battery in limited edition black and white livery, although it should be noted the blue-bodied versions are functionally and technically identical.

The Makita DHP482M1JW has a brushed motor, which although admittedly less efficient than newer brushless models, still manages to compete on weight and size. The two-speed gearbox enables it to go from 0-600rpm in first gear and 0-1,900rpm in second gear. In first gear, the drill has 62Nm of torque and in second gear it has 36Nm of torque.

Selecting first and second gears are achieved by moving the gear shifter on top to the desired setting, whilst forward rotation is selected by pushing the control button in from the right-hand side and reverse by pushing in from the left-hand side. A middle position locks the drill. This has become an almost universal controls approach between various brands.

There are 21 torque settings and unlike some competitor models, they are selected independently of the mode. The harder the material, or the larger the fastener, the higher the torque you will need to drive it. The torque selection is smooth, and it is easier to select than on some other brands. Drilling, hammer drilling, or screw-driving modes are selected by rotating the action mode ring.

A nylon keyless chuck is capable of supporting drill bits from 1.5mm to 13mm in size, and the DHP482 is capable of drilling up to 13mm in steel, 13mm in masonry, and 38mm in wood. It performed well inside these parameters. There is a belt hook that can be attached to either side of the tool or that can be removed completely if desired.

A bright, twin LED is positioned just above the switch trigger. Some people prefer this location to positions on the base of a drill as it is more in-line with the drilling or driving activity. The LEDs auto dim after 10-15 seconds of the trigger being released.

Makita 18V Li-Ion batteries are compatible with the whole Makita LXT range, although compatibility of some newer batteries should be checked with older tools. With the supplied Rapid Charger, the 4.0 Ah battery charges in 36 minutes and weighs 635g; the same weight and size as the 3.0 Ah and the 5.0 Ah batteries. Larger 6.0 Ah batteries are also available. A button and four LEDs are incorporated into the battery to allow you to instantly see the remaining charge.

At 1.8kg with the 4.0 Ah battery, it is similar in weight to many competitors and follows a similar design although some dimensions are a little different which may make it more comfortable for those with slightly smaller hands.

The DHP482 is also equipped with Makita’s Extreme Protection Technology (XPT). Ideal for use in outdoor applications and harsh jobsite environments, XPT is a protective seal inside the tool engineered to provide improved water resistance by channelling water and dust from the tool’s key internal components.

There’s little to complain about, and this robust combi drill from Makita is equally at home helping out with DIY as it is surviving the rigours of wet, dusty jobsites.