“I was 12 years old when I first saw The Old Bakehouse,” recalls Jonathan Blain. “I set off with my grandfather, Max Parrish, from Totnes in his 12-foot imitation clinker boat, which I now own and still use. I remember the excitement of coming around the corner and seeing the house for the very first time. It just seemed unbelievable to me at the time that the back wall of my grandparents’ home could directly adjoin the river.”

Jonathan now has children of his own – daughters Kezia (12), Xanthe (9) and five-year-old Talia – and The Old Bakehouse is still very much a part of their lives. Owned by the family for more than 30 years, and enjoyed by four generations, the iconic house has featured in numerous books, postcards and paintings.

Located in the tiny village of Tuckenhay in south Devon, the property stands on the banks of a small inlet off Bow Creek, which is the largest tributary of the River Dart. As the level of salt water recedes with the tide it reveals beneath it a river of crystal clear water, gently bubbling over the rocks, which proves a magnet for all manner of wildlife.

Thought to have been built in around 1750, the house had grown somewhat tired and was in urgent need of renovation and regeneration — a responsibility which Jonathan readily took on following the death of his grandfather. “I care deeply about the place — it’s full of wonderful memories, from Swallows and Amazons-type adventures to Christmases by the fire,” states Jonathan, who invested a huge amount of time, money and effort into creating a family home designed to make the best of such an incredible location.

The building was structurally sound, but the windows were rotten, the wiring was old and the heating and plumbing required updating. An asbestos sheet roof had seen better days and the décor was in need of an overhaul. Despite these problems, the property still retained a magical charm and a feeling of strength and solidity. 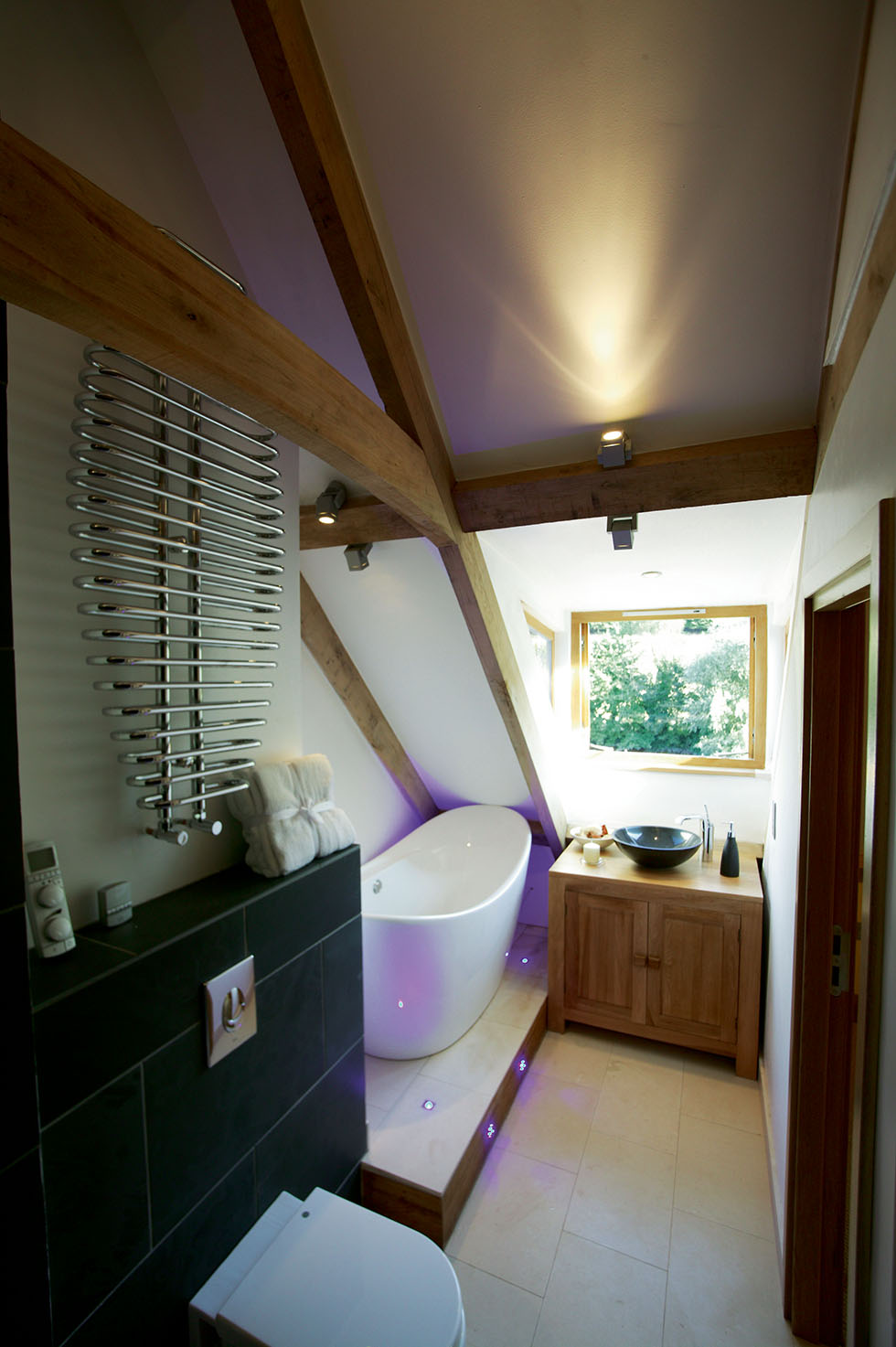 Jonathan engaged local ecological architect Andrew Kirby, whose passion and enthusiasm for the house and its setting were instrumental in the success of the project. Andrew worked with Jonathan to devise environmentally friendly solutions to the problems which arose from renovating an elderly house in such an unusual waterside location. The work was extensive and involved considerable research, learning about the materials used in the building and finding craftsmen who were masters of traditional techniques, including stonemasons and plasterers experienced in lime render.

“It would have been considerably cheaper, easier and quicker to knock down the house and build a new one, but that was never an option,” says Jonathan. “The setting is so special and unique that the guiding principle for the entire project was excellence and quality. The objective was to do a proper job and use the finest materials.” 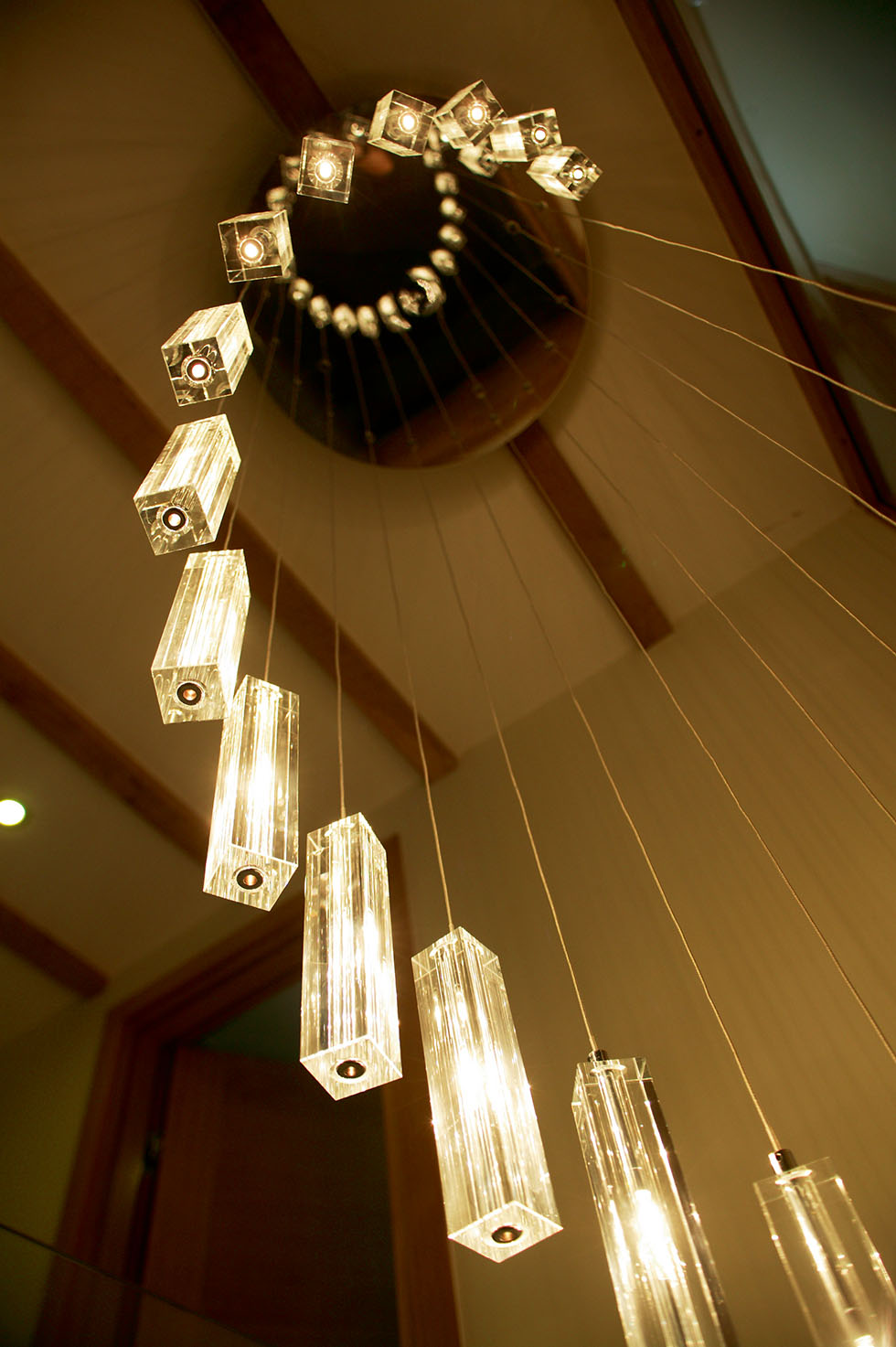 As a result of this philosophy, the building was completely gutted to bare stone walls both inside and out. The entire ground floor has been dug out using a mini digger, and was replaced with a new waterproof reinforced concrete slab and a cementitious tanking coating for the walls. As an additional precaution the external door thresholds have been raised, as has the lowest window to the rear of the house.

“The Achilles heel of any waterside property is the threat of flooding, and having experienced the occasional flood at The Old Bakehouse over the years I wanted to create the best possible defences,” explains Jonathan, who lived on site throughout much of the build, sleeping on an army camp bed. “Should the tanking system fail then the second line of defence is a membrane, drainage and pump system. A belt and braces approach.”

The original thick external walls of the house are constructed from stone and natural cob, and these have predominately been finished with a lime render. Prior to renovation the house had a corrugated asbestos roof with unattractive softwood rafters, which has now been replaced with a stunning green oak truss roof, made on site by a team of specialist carpenters. 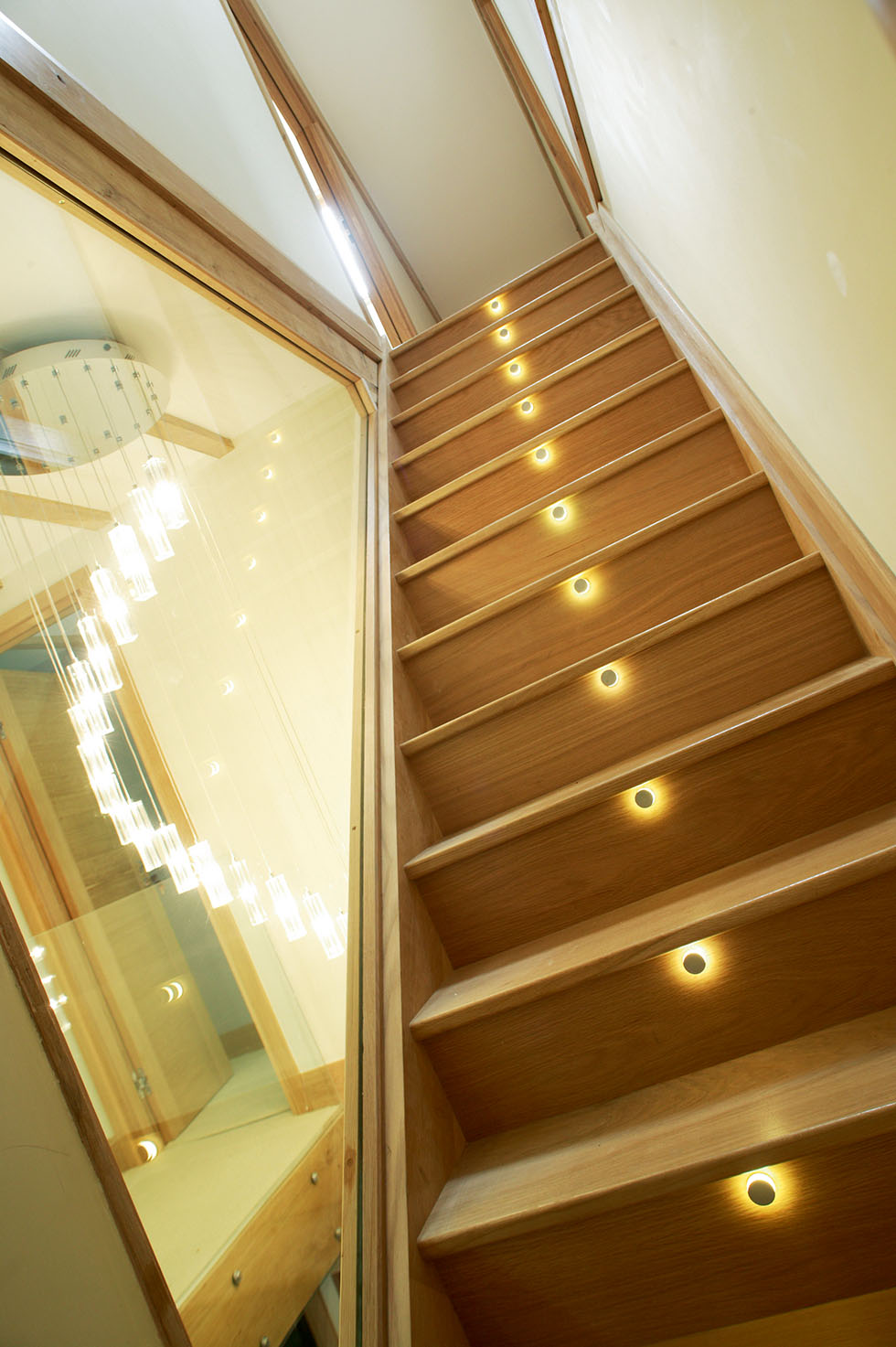 Craftsmanship is evident throughout the building, which boasts handmade oak windows and doors and handcrafted stainless-steel dormers and side roofs. Natural materials such as lime render, stone floors and sheep’s wool insulation have been used wherever possible, and the result is a high-performing modern building inside an old shell. “The house is a really interesting combination,” says architect Andrew Kirby. “As a home it’s as modern and progressive as you can get, but we’ve also preserved a beautiful old building.”

The project was not without its dramas, including unsympathetic villagers, vandalism and a break-in, but Jonathan and his team faced the numerous challenges and invented some unusual concepts along the way — including an inflatable temporary roof designed to protect the cob walls during the renovation (SEE BELOW FOR MORE).

Glass plays a key role in the overall design, and a strategically placed rooflight drops shafts of natural light down the two storey stairwell, which is flanked by a glass wall. The risers of the oak staircase are also glazed, and glass walls in the hallway create an open plan feel and maximise the river views. 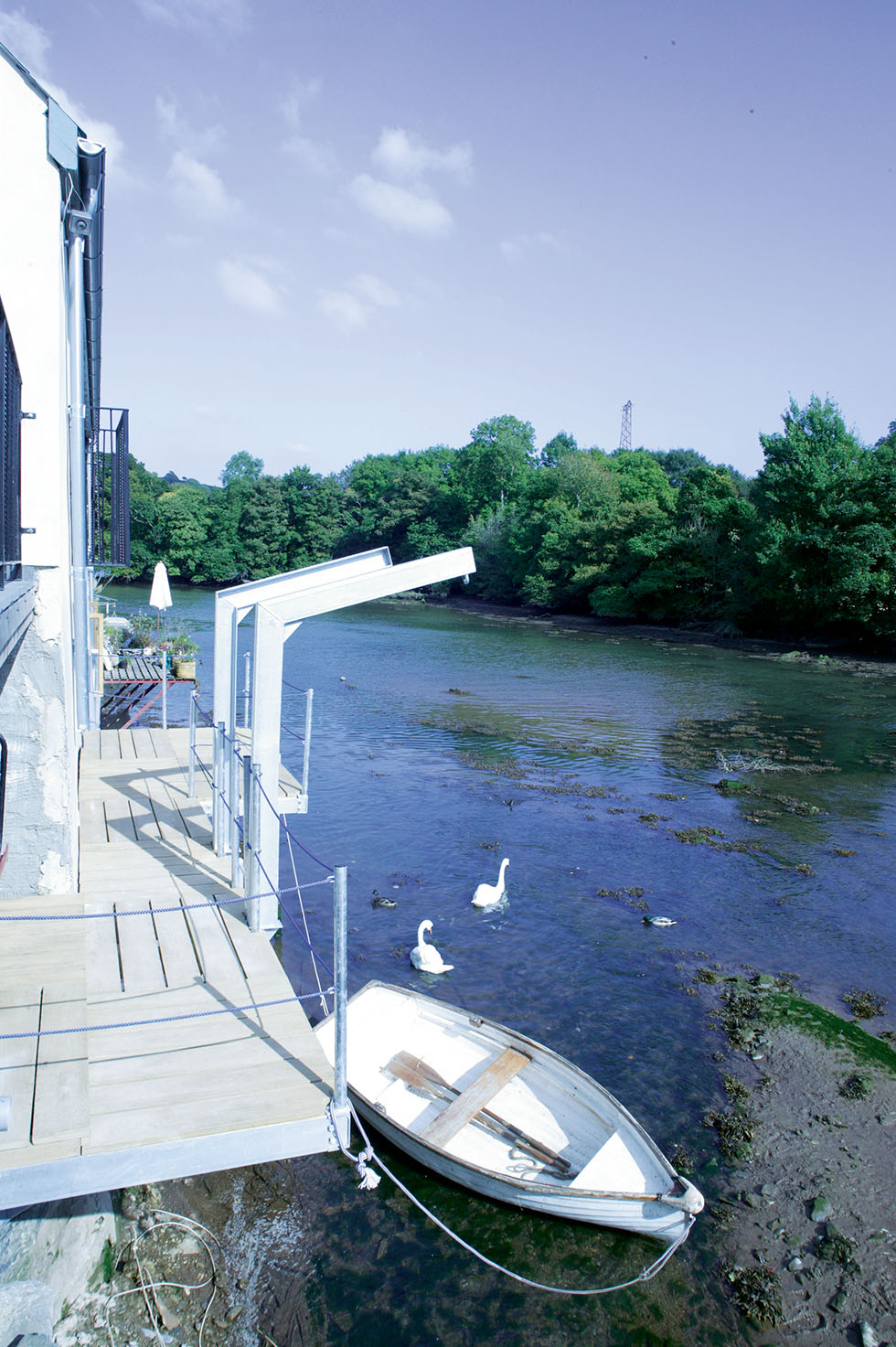 The house is extraordinarily well insulated and has highly efficient argon-filled double glazing. Solar panels, fitted to the rear of the property, are expected to provide around 30% of the hot water, and an oilfired condensing boiler has been installed. The ground floor benefits from zoned underfloor heating, with contemporary log-burning stoves in the sitting and dining rooms. Bedrooms on the first and second floors have thermostatically controlled radiators and all en suite bathrooms have programmable underfloor heating beneath natural stone floors, designed to keep bare feet comfortably warm.

Low-energy, low-voltage, mains voltage and LED lights are all used to provide a variety of lighting solutions, from stunning wall lights to feature ceiling lights, background lighting, mood lighting and functional lighting — both inside and out.

“The Bakehouse benefits from one of the most advanced lighting systems in the world,” says Jonathan, who attended a course on the system. “It operates like a computer network, with programmable LCD screens which allow scene setting and include security features. Movement sensors can be used to turn lights on and off when you enter and leave a room, and light sensors enable the dimmers to provide perfect light levels at different times of the day.” 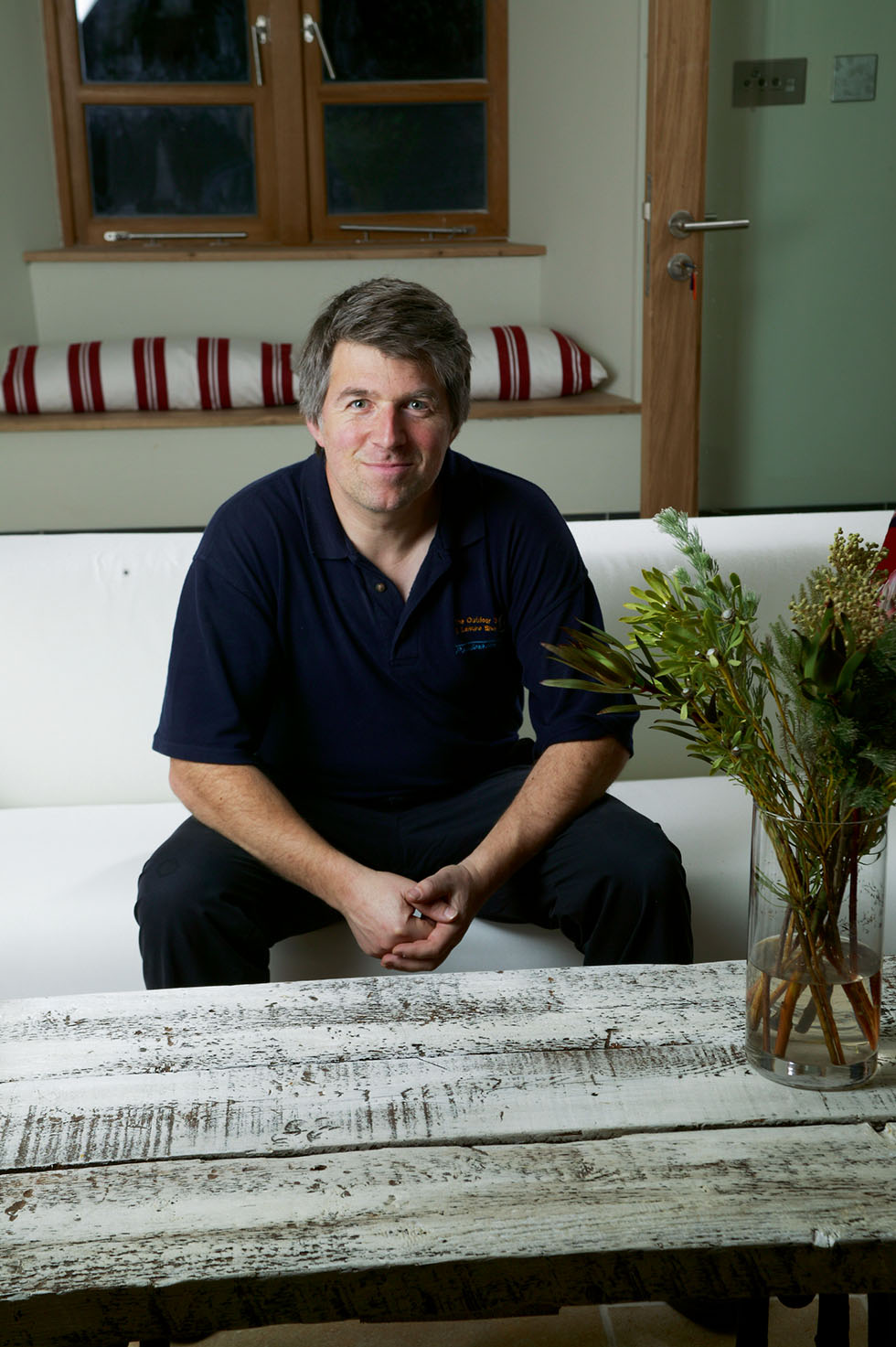 Additionally, The Old Bakehouse has a broadband internet connection and a Cat 5/6 wire-based network to all bedrooms and living areas. A Delta 8 system includes points which may be used for telephone, data, television aerials or DAB digital radio; and a whole-house multi-room audio system has a server capable of holding 80,000 tracks and internet radio. The sitting room is wired for cinema surround sound, and the aim has been to try to future-proof the house as much as possible.

“It’s definitely a house for all ages,” says Jonathan, “and at times we have had four generations of the family building dams in the creek. It’s great to be able to dangle your feet off the landing stage, or to go crabbing right outside, and there’s nothing better than coming back from a fishing expedition on the river and barbecuing the freshly caught catch.”

Unfortunately, a change in circumstances means that the Blain family can no longer continue to own The Old Bakehouse, and are forced to offer the property for sale. “For most of my life this place has felt like a refuge, and it breaks my heart to be selling it now, but career pressures mean it is no longer practical,” Jonathan explains. “But maybe we have had more than our fair share of time at the house and need to let some other lucky family have their turn.”

A specialist in innovation in his career, Jonathan applied his entrepreneurial skills to the renovation, pioneering a unique inflatable roof, to keep the interiors dry whilst the builders worked on the project. “The usual solution seems to be a scaffold structure with a tin roof and tarpaulins,” Jonathan explains. “But these cost a lot and take a long time to put up – and can be dangerous – so I looked into other routes.”

Initially Jonathan considered marquee roofs, but based the final idea on another familiar sight at village fêtes: “I was actually inspired by bouncy castles and entered into partnership with the UK’s number-one company for inflatable buildings. A scaffold company worked out the calculations and the roof was put up in half a day. It comes in fabric sections (white areas let in light) and is inflated once laid. It was amazing how effective it was: we had an incredibly stormy winter and it held up wonderfully throughout. As it doesn’t disrupt the building’s fabric, an inflatable roof is perfect for a historic building.”

Enquiries to Southern Inflatables (01730 827027). Some sizes available for rental; others can be made to order.