Not known for rushing in before considering all the pros and cons, Will Lasdun and his partner Lisa Class nevertheless didn’t think twice before buying their property near Torbryan, Devon — deciding to buy it on the approach lane, before even reaching the existing three bedroom 1960s bungalow that sat on the woodland site, with views looking out over the fields towards the English Riviera.

“It was hidden away down this narrow tree-lined track,” explains Will, “and I just thought whatever is at the end of this lane, we can make it good.”

Will, who has a background in sculpture and runs his own building design business, had no difficulty reimagining the bungalow as the perfect family home. With their son Blaise, 11, the couple had been living in their self built home in Totnes, which Will built back in 2005, and had reached the stage where a garden to play in and space to entertain friends were increasingly important.

The couple moved into the bungalow in November 2009 and started to think about what to do with it.

“It was a fairly standard, not especially attractive 1960s bungalow and, in that sense, we were lucky because the planners weren’t too concerned about it — other than the fact that we were right next to a Grade II listed manor house,” explains Will. “But as we chewed over the design, we had to do our sums and decide whether to knock the bungalow down and build from scratch VAT-free, or to somehow adapt and incorporate the original building in our plans.” 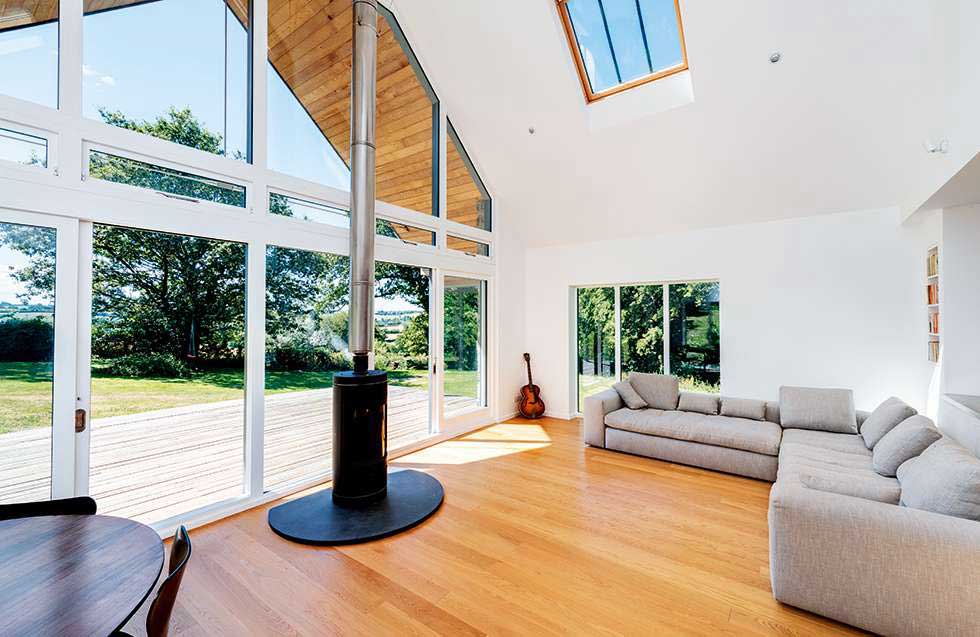 The kitchen/dining/living area enjoys views over the garden and beyond through the double-height window. The contemporary-style Saey Linus woodburning stove helps to warm the space; as does the underfloor heating

Those were by no means the only considerations though: one major factor was that the very same idyllic country track that had first won them over was simply too narrow for big delivery lorries.

“A 400-year-old oak tree overhangs the track, so there were height restrictions too,” says Will, “and the cost of demolishing the bungalow and removing 60 loads of rubble on smaller trucks and pick-ups would have amounted to around £20,000. Plus, we needed to live somewhere while we were building and we couldn’t even get a caravan down the track. In any case, it seemed a huge waste to throw away a building with potential.”

With the need to live in the property during the build, the decision was made to keep all four external walls of the bungalow, but to radically change its internal structure and replace the roof to give extra height. The new design would also see the demolition of the old garage with a replacement new building joined to the bungalow via a glazed link. This new garage provides bedroom space above, along with a west-facing studio for Lisa, an artist, and a workshop and office for Will.

Initially, Will submitted plans for pre-approval for two storeys for each part of the new house, incorporating a curved, barrel-vaulted roof.

“There were plenty of farm buildings in the area with similar rooflines, so I thought it would blend in well, but the planners weren’t crazy about that next to a listed building, so I had to rethink it,” he says. “Actually, curves introduce extra costs, so I wasn’t overly worried, and our revised plans for steepening the pitch of the roof to give us one and a half storeys, along with the bedroom/studio, were passed.”

Will started work on the house in November 2009. Building materials were brought down the lane on the back of his Land Rover pick-up and, just as he had done for the family’s first home in Totnes, he took on the entire build himself, calling on a joiner, carpenter, plumber and electrician for specialist help whenever he needed it.

The family lived in the main bungalow as Will demolished the garage and built the new garage and timber framed bedroom/studio/workshop area above. Once that stage of the build was complete, the family moved into this while work began on the main bungalow, with Will removing the roof and stripping out the interior walls.

Hardley recognisable from its old self, the new home includes a new timber-framed bedroom and studio section above a double garage

“It made sense to radically rework the layout of the bungalow because the first thing that struck us when we looked round was that the master bedroom was monopolising all the best views, overlooking the fields towards the coast,” says Will. “We wanted to put our main open plan living space there, together with a huge double-height window and outdoor decking for entertaining.”

Open-plan Space
Thanks to Will’s reworked layout, the new open plan kitchen/dining/living space acts as the heart of the home, with the large expanses of glazing allowing the family to make the most of the views. The kitchen was built to Will’s design by joiner Robin, who used a combination of HDF for the cabinets – sprayed in two-pack lacquer – and stainless steel worktops from GEC Anderson in Tring. Opposite the kitchen, and filling a vast expanse of wall, is a fitted open shelving unit, again designed by Will to house all of the family’s treasures.

Maximising Light
Adding height to the roof to create a mezzanine had another advantage too, as Will explains: “The old roof was quite low and the gable end of the house looked squat and out of proportion. But now with the extra height and all the glass, the living area tracks the sun round and, with added Velux windows in the roof, the house is full of natural daylight all day long.” 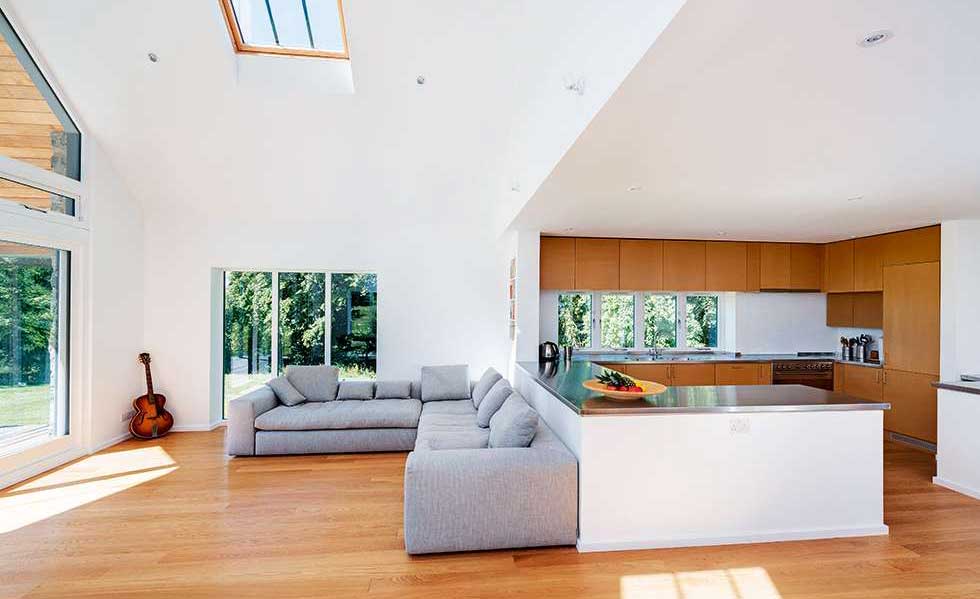 Mindful of costs, the logistics of getting new materials on to the site, and keen to reuse as much as possible, Will made sure nothing went to waste. The stone sections of the bungalow for instance are original, but now look very different next to the western red cedar cladding and smart grey render, and the wall around the deck has been built using stones from where the previous windows were taken out.

The gable end itself was also constructed with the old timber purlins from the roof. “Robin the joiner did an amazing job and machined it all in two halves,” says Will. “We also had a brilliant carpenter, Ian, who helped me every Saturday and my good friend Hugh helped me install the windows, staircases, doors and main south gable frame.”

Given the coastal location, consideration had to be given to the stability of the products, and so two big sliding doors leading out to the garden were chosen over bi-fold doors in the main open plan living area. “We’re very exposed to southwesterly storms here,” says Will, “and from previous properties, I knew you had to be careful with the weather. It turned out to be a good decision.”

Equally essential – although they look unobtrusive – two galvanised steel posts at the end of the gable were installed to provide stability for the cantilevered section, as they connect to the steels in the roof.

“They’re actually working quite hard to hold the building down, as it’s a real wind trap,” explains Will. “Getting the half tonne steels in situ was interesting too. We had a friend with a telescopic forklift tractor to help us manoeuvre them.”

It seems wind power might have been the most fitting solution on such an exposed and windy site, but instead the house has oil-fired central heating, with underfloor heating supplied by Maincor. Plumbing has also been installed for solar panels which Will will eventually fit on the roof.

A 130mm-wide engineered oak floor from The Natural Wood Floor Co. has been placed on top of the original timber floor for added insulation and, just in front of the big windows on a 40mm-thick slate hearth, sits a Saey Linus woodburning stove which acts as the main focal point of the room — it throws out enough heat to warm the rooms in the mezzanine above. In fact, a round interior window overlooking the living room can be opened to allow heat from downstairs to circulate and heat the upper level.

From the carefully considered spaces to the detailed elements such as the shelving, every aspect of this house has been planned to perfection. And true to the promise he made before he reached the end of the lane, Will most certainly has made it good.