Ruth and Donald Macdonald moved to London’s Regent’s Park in 2007, then bought an old mews house. Their creative remodel of the property won them the Best Renovation award in the Homebuilding & Renovating Awards 2013.

They had lived in a village in Oxford with Donald commuting to his job in Central London, but when their children left school they decided to move.

Ruth, an artist was working in a cramped rented studio and needed more room for her work, so the solution was to find a house with the capacity to include a bright studio. They found this potential in an elegant three storey house, just a short distance from the city centre, where they built a light filled basement.

The Macdonalds bought a Georgian, Grade II listed terraced home with outside space for their two labradors. It was in a poor state of repair with a leaking roof, damp problems and bad drains.

The home was built by John Nash in 1823 and the Crown Estate is freeholder meaning all work was monitored by them and English Heritage.

Ruth and Donald wanted to create a large studio in their home. To fulfil Ruth’s needs as an artist, this needed to be abundant with natural light.

They also needed to refurbish the rest of the property and wished to maintain some of the period charm.

To make room for a studio, they knew they had to extend but expansion space was limited to the small rear garden. After inviting three architects to submit their ideas, they chose Belsize Architects who were familiar with the local planning requirements.

They proposed a small glazed lower ground floor extension with a newly built basement studio below. Rather than excavate below the existing property – which would have been risky with a building of this age – the basement was extended away from the house into the garden space.

To allow as much light as possible into the basement studio, the architects designed an extension that is essentially a glass box. This has an etched glass floor and a glass ceiling which lets light flow from above.

Down in the basement, they incorporated a double height void to the living area above. They also built a small courtyard with glass doors at basement level which acts as a lightwell (and source of ventilation) meaning that it really doesn’t feel subterranean at all.

The main house has been decorated in a fairly traditional style, whilst the extension is beautifully contemporary.

Original plans involved a glass floored patio area outside, but Camden council’s planners suggested this was reversed and the glass floor be inside the extension instead. Planning was managed by the knowledgeable Belsize team so it was a drawn out but easy process for the Macdonalds.

As well as having to consult English Heritage and the Crown Estate, the Macdonalds had to complete various surveys and engineers reports, and make sure their neighbours were legally protected against any damage that may be caused.

It took two years to finalise everything, secure planning and get costings from a quantity surveyor, but it was worth it for the peace of mind that they were prepared. 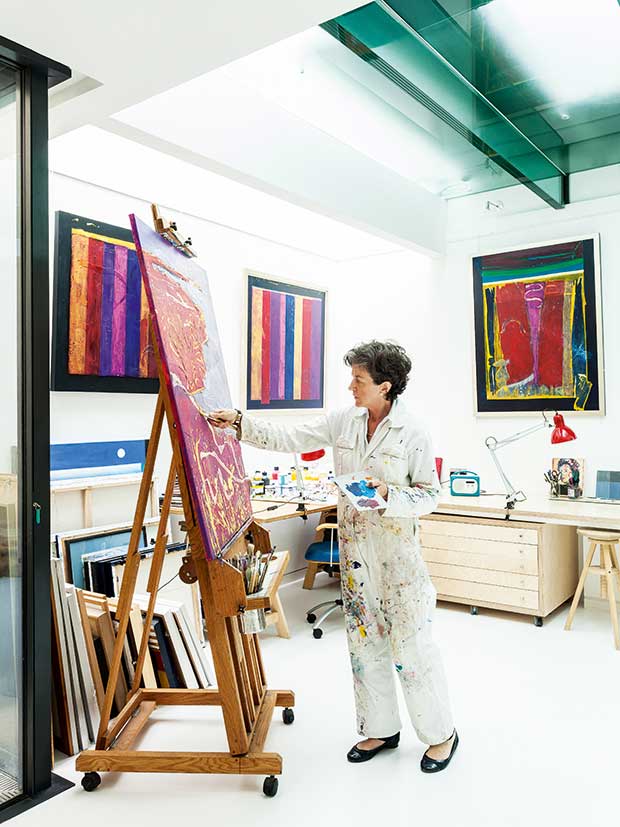 Ruth says that due to the natural light, her studo does not feel like a basement at all

The build commenced in August 2010. Ruth and Donald moved out for the year and let Belsize oversee the project.

The renovation side of the job was relatively easy — the roof was repaired; structural steelwork introduced to strengthen the building; and the builders discovered some concealed shutters in the sitting room and study which have been reinstalled. A new kitchen and bathrooms completed the works to the original house.

The basement and extension were less straightforward due to the challenges of excavating behind a row of listed terraces. Firstly, getting plant and materials on site required a crane, and they even had to dismantle a mini digger and carry it through the house to get to the garden.

Once the hole had been dug, the walls around the basement were underpinned and reinforced, then the walls, floor and part of the roof was constructed as a concrete box. A pumped drainage system carries any water away from the house.

The build was only slightly delayed by the time it took to dry out the resin floor in the basement, and the project was complete in just over a year.

Favourite Feature of the House

Ruth is more than happy with the results.

“The light is wonderful for painting and for displaying art. My studio serves as a mini gallery and we’ve hung other artists’ work in the glass box extension, which is always comfortably warm and relaxing.”