Peter and Alison Dudgeon have transformed the small house attached to their family home in Winchester, into a light filled, low energy home.

Having lived on the site in a nine bedroom house for 12 years, the couple felt it was time to move from the large family home to something more manageable for their approaching retirement.

They bought the smaller house attached to their own and embarked upon an amazing renovation project which has both transformed the house, and maintained its kerbside period charm.

The manor house was built in 1856 by the Earl of Airlie, then divided into two dwellings in the 1950s. Peter and Alison lived in the larger half, and their elderly neighbour Nancy owned the smaller attached house which was originally the servants’ wing.

They were familiar with the smaller property as they would pop in to visit Nancy everyday. When she sadly passed away at the age of 93, the house was in a poor state with trees growing out of the roof, collapsing chimneys and rotten window frames.

The Dudgeon’s decided to buy the house, undeterred by its condition or the warren of small rooms it consisted of. They spotted the potential of the large basement (the old wine cellar to the manor). 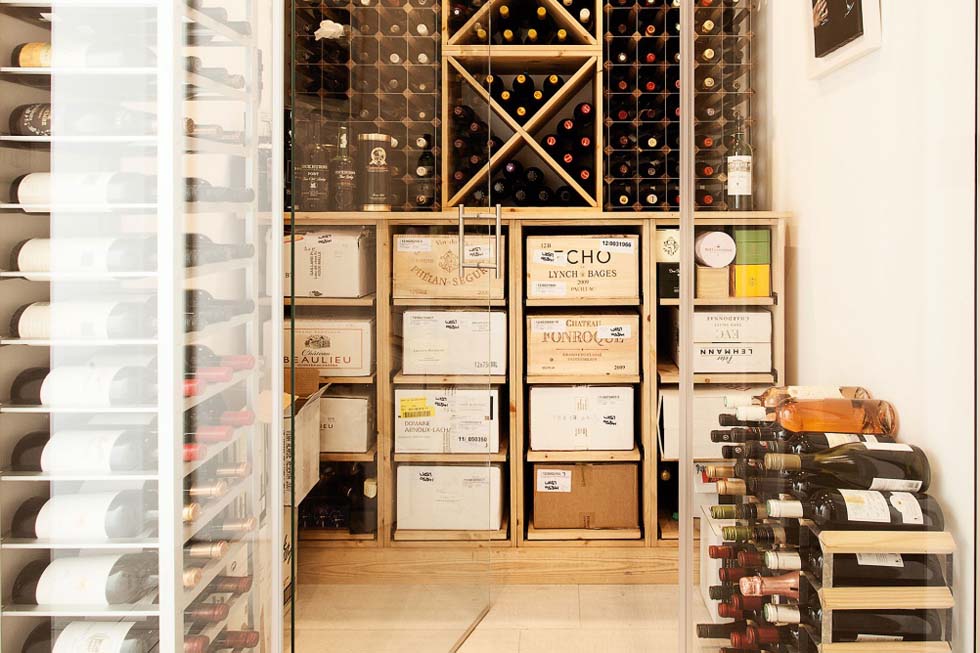 The basement has been converted and now houses a television room, bedroom and Peter’s wine cellar

Peter and Alison wanted to introduce space and light, without making the house too big or hard to heat.

Their desire for light led them to approach award-winning local architects AR Design Studio — well known for their work with glass. Director of the practice, Andy Ramus, designed a contemporary frameless glass extension which would open on to the rear garden without impacting on the traditional brick shell of the building.

This created room for a bright open plan kitchen/dining/living space. He included vertical voids connecting the ground floor and cellar to bring light into the basement. This area houses a television room, fourth bedroom, bathroom and Peter’s wine cellar.

The rest of the house is minimal with strategically placed sculptures, and timber effect ceramic tiling (from Vives) throughout. 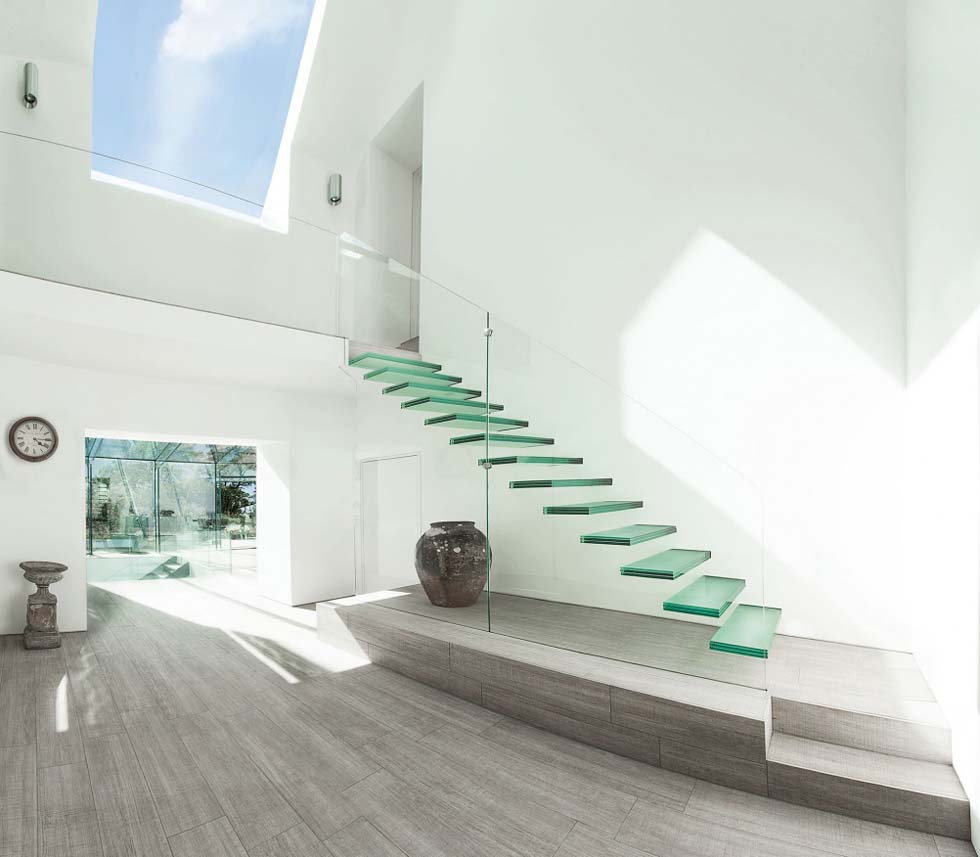 The treads of this staircase are made with toughened, anti-slip glass

The ultra modern look of the extension meant that it took a while to gain planning permission. The house is in a Conservation Area, so understandably, the alterations had to be approached with this in mind. After two attempts over 15 months, planning permission was granted. Keeping the front elevation of the house traditional with the contemporary extension to the rear helped.

The couple worked hard to strip out the building before the work began. They then divided responsibilities, with Alison being in charge of the kitchen and flooring, while Peter worked on the bathrooms, lighting and music system.

The whole place needed gutting, with just the walls left standing. A new slate roof and new windows were carefully matched to the originals.

Work progressed smoothly as the retired couple had time to fully dedicate themselves to the work. However, in the summer of 2012 towards the end of the project, builders excavating drain trenches for the new extension discovered human remains in the garden.

This called halt to the build as the police had to be called. By 6pm another two bodies had been found, later identified by archeologists as being of Roman origin. Further evidence of Roman burials and defensive fortifications were uncovered on site — relics from Winchester’s past as the Roman capital of England.

By June of that year, the house was ready for the couple to make their short move across from the manor. 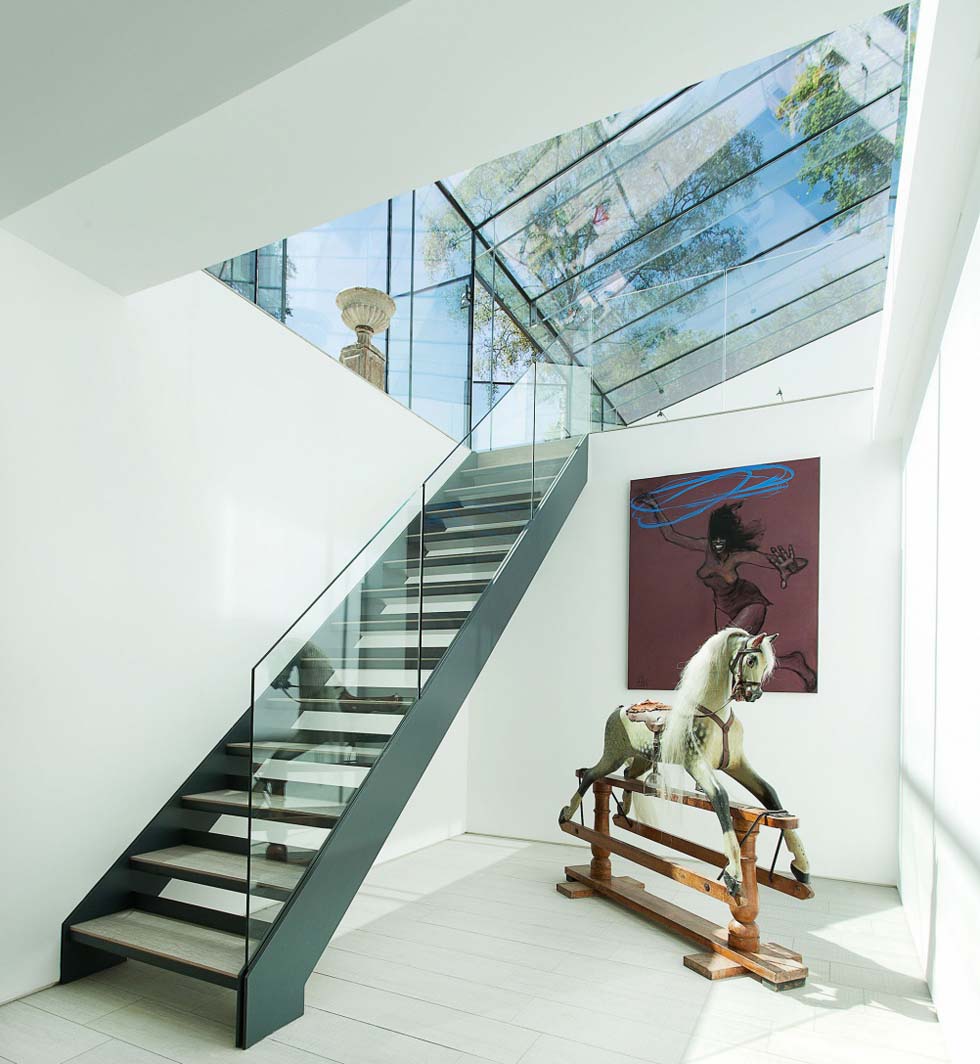 The single storey glass extension creates a flexible inside/outside space and cost £80,000. It is made from 12mm outer sheets of toughened glass (five times stronger than standard glass) and is supported by a structure of low-iron ‘white glass’ which does not give off the green tinge of thick glass, making it less prominent.

The glass is coated with solar-controlling titanium dioxide which reduces the amount of heat entering the building by 59 percent. This prevents overheating in summer. Large glass doors provide ventilation.

The inner pane has a low E coating which absorbs heat energy, and an argon filled cavity reduces heat conductance between panes — this keeps heat (provided by underfloor heating) in the building in winter. Therefore the structure maintains a comfortable temperature throughout the year with no need for shades, blinds or a heat recovery system.

As well as heat regulating technology in the glass, the couple also added the following to their home:

Peter and Alison love their glass staircase — even if some visitors are afraid to walk on it at first.