As labour-of-love projects go, the Grants’ re-imagining of their family farmhouse at Invergarry makes for a lively tale, played out to great aplomb by various family members including retired owners Ken and Grace, who were responsible for constructing a great part of the build; daughter Mhairi who designed the scheme; and the whole extended family, who were drafted in to help.

Taking place over the best part of 10 years, what finally emerged in 2014 is a remarkable contemporary farm ‘complex’ that manages to retain the integrity and charm of the ‘Old Farmhouse’.

“The original cottage belonged to my grandparents, and my father was born and brought up there. Over the years it had accumulated various ad hoc extensions, flat-roofed dormers and a car port, and was physically attached to the cattle byre at the rear,” explains Mhairi, who designed the new-look Old Farmhouse between 2003 and 2004, while becoming a chartered architect, with the detailed design being completed together with her husband Martin McCrae of Paper Igloo. “The existing farm buildings were a ramshackle arrangement, though not without their charm,” adds Grace.

In terms of the ‘new’ family home, the couple agreed that, although they were downsizing, they weren’t looking for anything small or poky. The house was to be the hub for their extended family of grown-up children and grandchildren. They were also keen for any new additions to be modern, yet sit sympathetically within the Highland landscape.

Central to Mhairi’s design response was the retention and restoration of the original cottage externally, although in order to create a modern double-height space internally, the roof was removed and the walls built up by 1m before the roof was rebuilt. All the add-ons would be stripped away and the building separated from the byre. Two contemporary ‘barn’-style buildings were designed to flank the farmhouse, connected via glazed links. “All of these new additions now create a ‘backdrop’ to the original house, and reinstate its significance at the heart of the scheme,” says Mhairi. Although this was effectively Mhairi’s first architectural project, the planners fully embraced her vision. 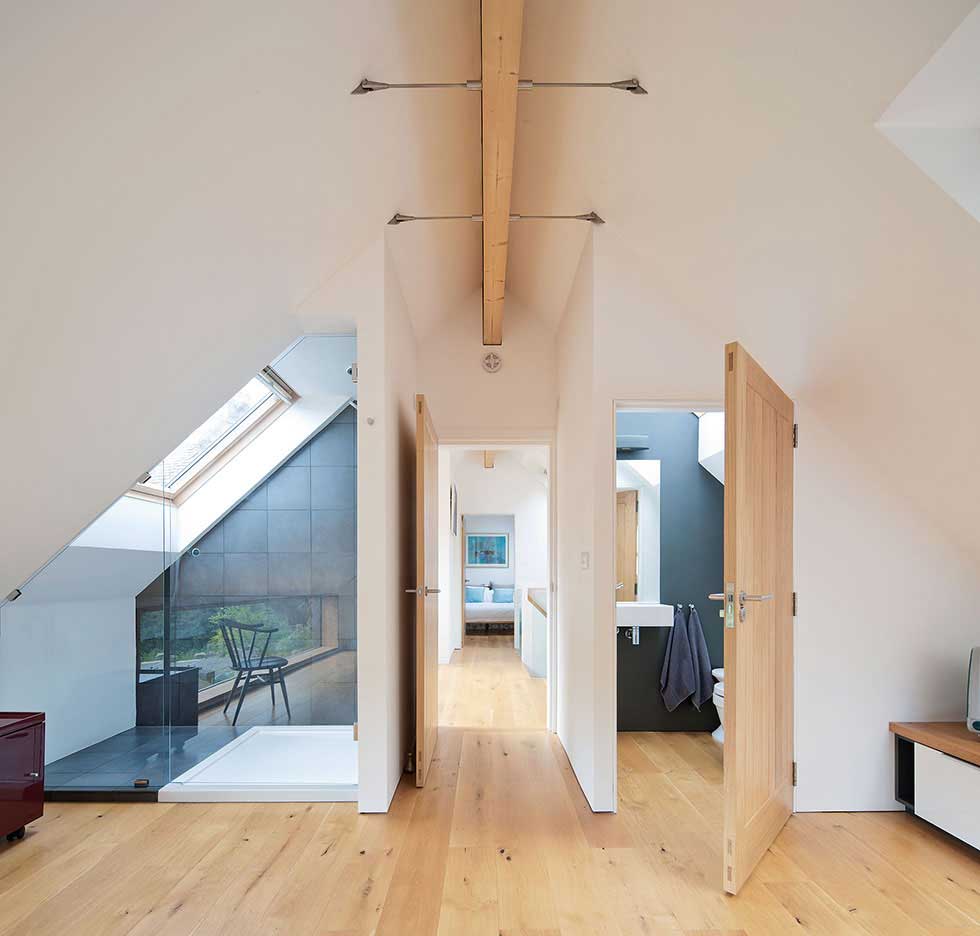 Glulam (glued laminated timber) beams are strong but lightweight, and well suited for creating large clear spans without the need for supporting columns

The farmhouse is now entirely occupied by the kitchen and dining area. The first ‘barn’ features the main living area and leads to the Cor-ten steel-clad circulation tower that houses Ken and Grace’s book collection as well as their en suite bedroom on the upper level — and a top-level viewing platform. The other adjoining timber frame barn, built by Ken, features a ground-level family bathroom and utilities area as well as a lounge-cum-guest bedroom, with two additional en suite bedrooms and an office area above.

One particular challenge faced was incorporating a 100-year-old apple tree that stood in close proximity to the farmhouse. “We were keen to keep this element of the farm’s history,” says Mhairi. “The engineer came up with a solution for ground beams and piers for the tree roots. The piers are columns filled with concrete — like a concrete tower in the ground. The four piers create a square around the tree. The established roots can stay where they are and the new roots can grow through the piers; they have a clear path.” 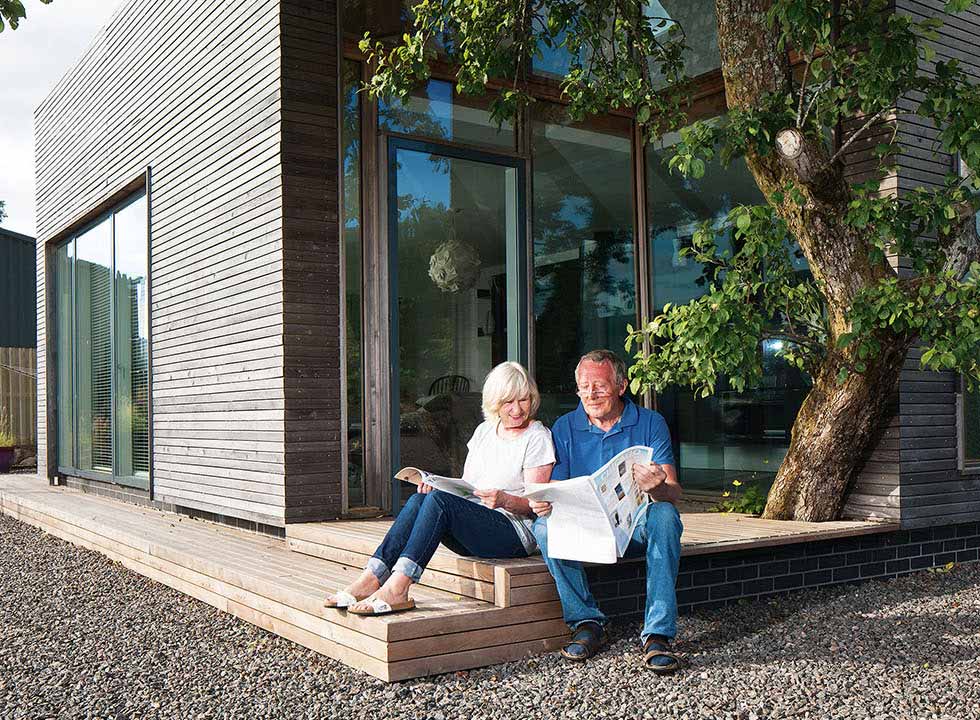 At the time of inheriting the Old Farmhouse, Ken and Grace relocated from Glasgow to a neighbouring house on the site with a view to project managing. Once planning consent and building warrants were issued in early 2005, Ken, a retired doctor, was able to roll up his sleeves and take on what would be his first major building project — and one that certainly wasn’t lacking in ambition. 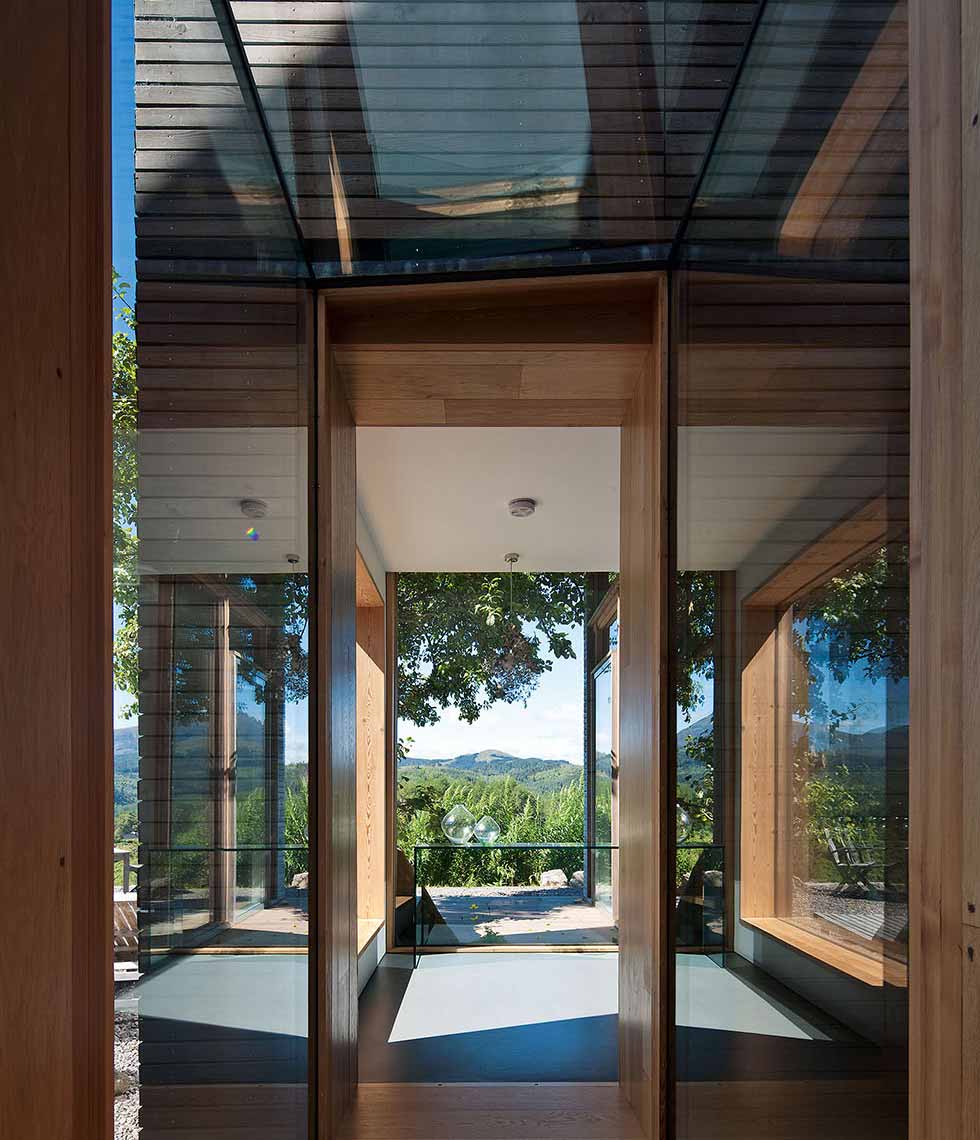 The old farmhouse is connected to the two modern extensions by glass links, which help to visually separate the buildings but also help with moving natural light into the farmhouse

Alex, an old school friend of Ken’s, now a local contractor, was luckily on hand to help with the demolitions and clearing of the site, something that wasn’t without its challenges: primarily, the discovery of ‘blue stone’, a type of stone that geologists identified as being 700-900 million years old, and being 40 per cent iron made it 30 per cent heavier than granite, and no small feat to remove.

“When Alex dug the trench for the underfloor heating, it took two days to remove one stone that weighed around seven tonnes,” says Ken. “We finally managed to drag it out with ramps.” The other rubble collected from the site was then recycled to create the drystone retaining wall, built again by Ken, “and various family members press-ganged into helping!” he admits. 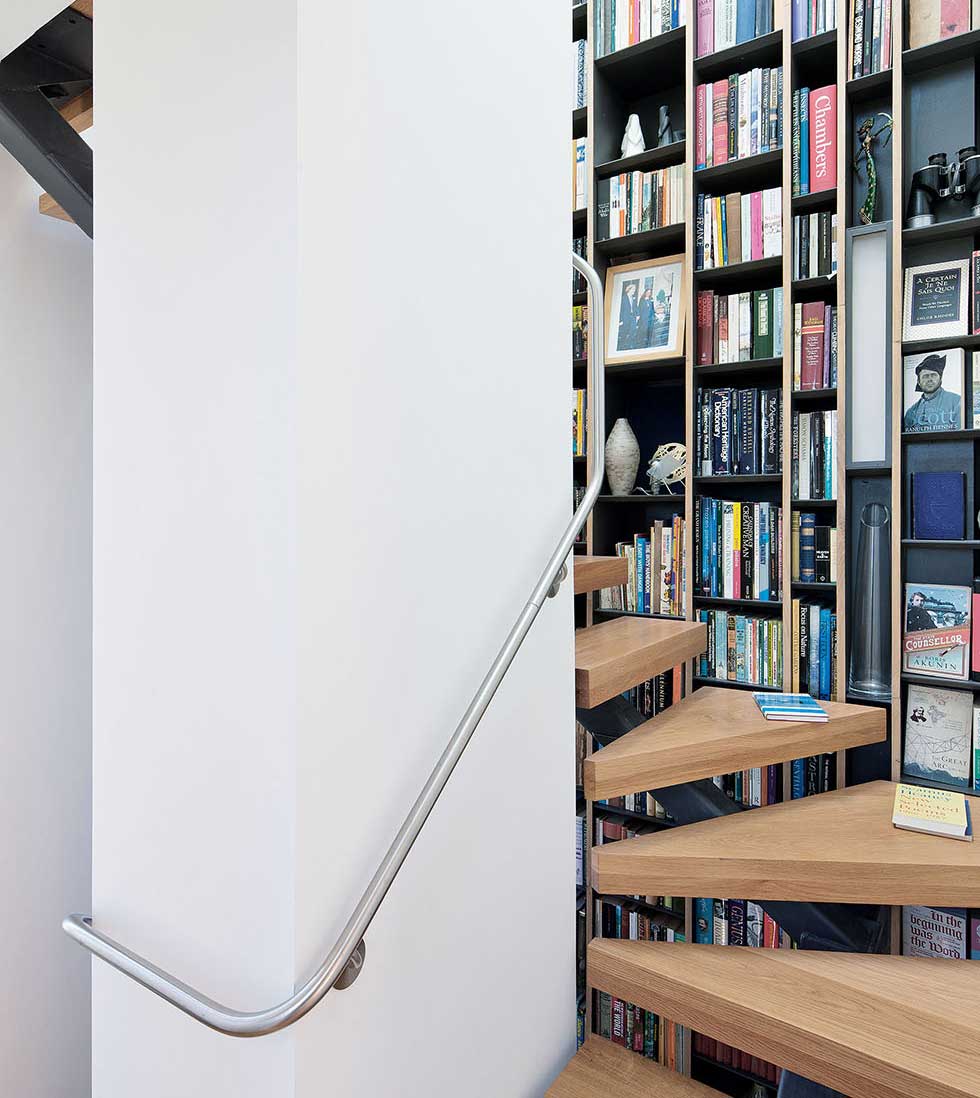 Ken, who learned most of his skills from his father at an early age growing up on the farm, admits that a pragmatic approach to the whole build certainly helped. “I was very much of the ‘invent it as you go along’ school of thought, whereas Mhairi was very precise with all the design details. In the end I deferred!” Ken’s methods were at times slightly unorthodox, though highly inventive considering the logistical difficulties of shipping materials directly to the site. “Access was challenging because of the narrow track to the house,” says Mhairi.

A lot of materials had to be delivered to the bottom cattle grid then collected and ferried to the house in a trailer or dumper (or indeed Ken’s makeshift ‘bogy’ made from the axel of an old lawnmower). There could be no craning so everything had to be worked out in a back-to-basics way. “That’s where Dad’s eBay lift came in,” says Mhairi. “I bought a hand-operated motorised elevator and this helped install the four glulam beams in the new build. You could hoist them to the first floor and shuffle them across manually,” says Ken.

Indeed, Ken and Grace have no gripes about any aspect of the build, even the 10-year timetable. “We did have a hiatus of around two years, trying to sell our previous house, as we put it on the market on the verge of the economic turndown,” says Grace. “However, in many ways the long process has worked out well as it would have cost us a lot more if we had stuck to a rigid timetable. And Ken really enjoyed doing it.” 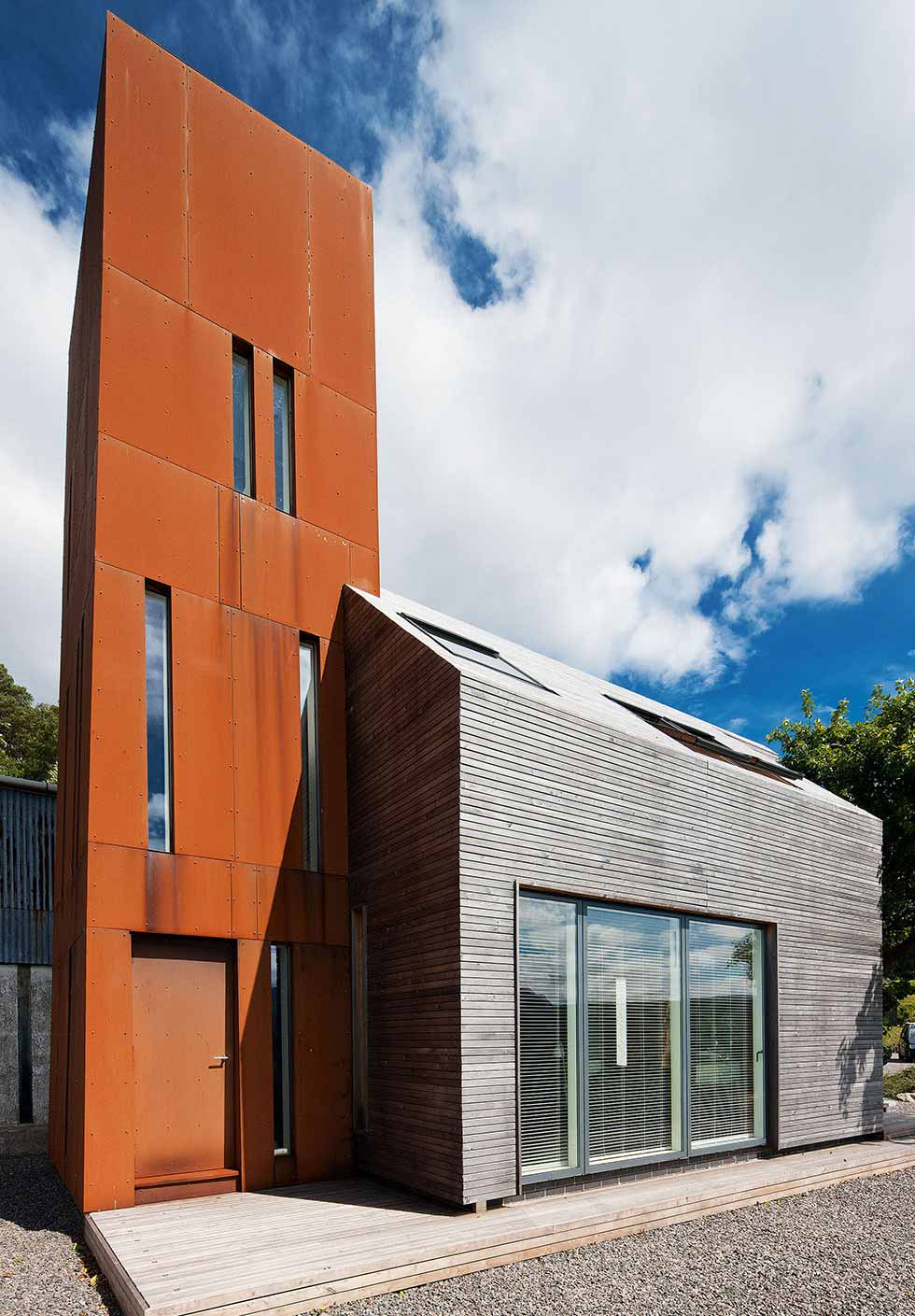 Weathering steel – Cor-ten is the trademark name for this group of steel alloys – naturally oxidises to form a stable rust finish – this means the material requires no finish when installed, and is low-maintenance throughout its life

The simple choice and application of materials is central to the success of the new build elements, as Mhairi explains: “The Cor-ten steel echoes the agricultural/industrial feel; rust is quite intrinsic to many farm buildings, with old machinery and dilapidated buildings. Then I felt that the timber cladding is a natural and soft contrast to the hard finishes of the Cor-ten and harling of the original house.”

Unusually, Mhairi has continued the larch onto the roof. “The timber roof keeps the language homogenous. We didn’t want any fussy details, we wanted the shape to be simple and unfussy. The roof is ventilated so it can dry easily — it’s no different in my opinion than a timber wall. At the time I designed this there were virtually no timber clad roofs in Scotland, but I think they’re gaining in popularity. Ours is performing really well.” 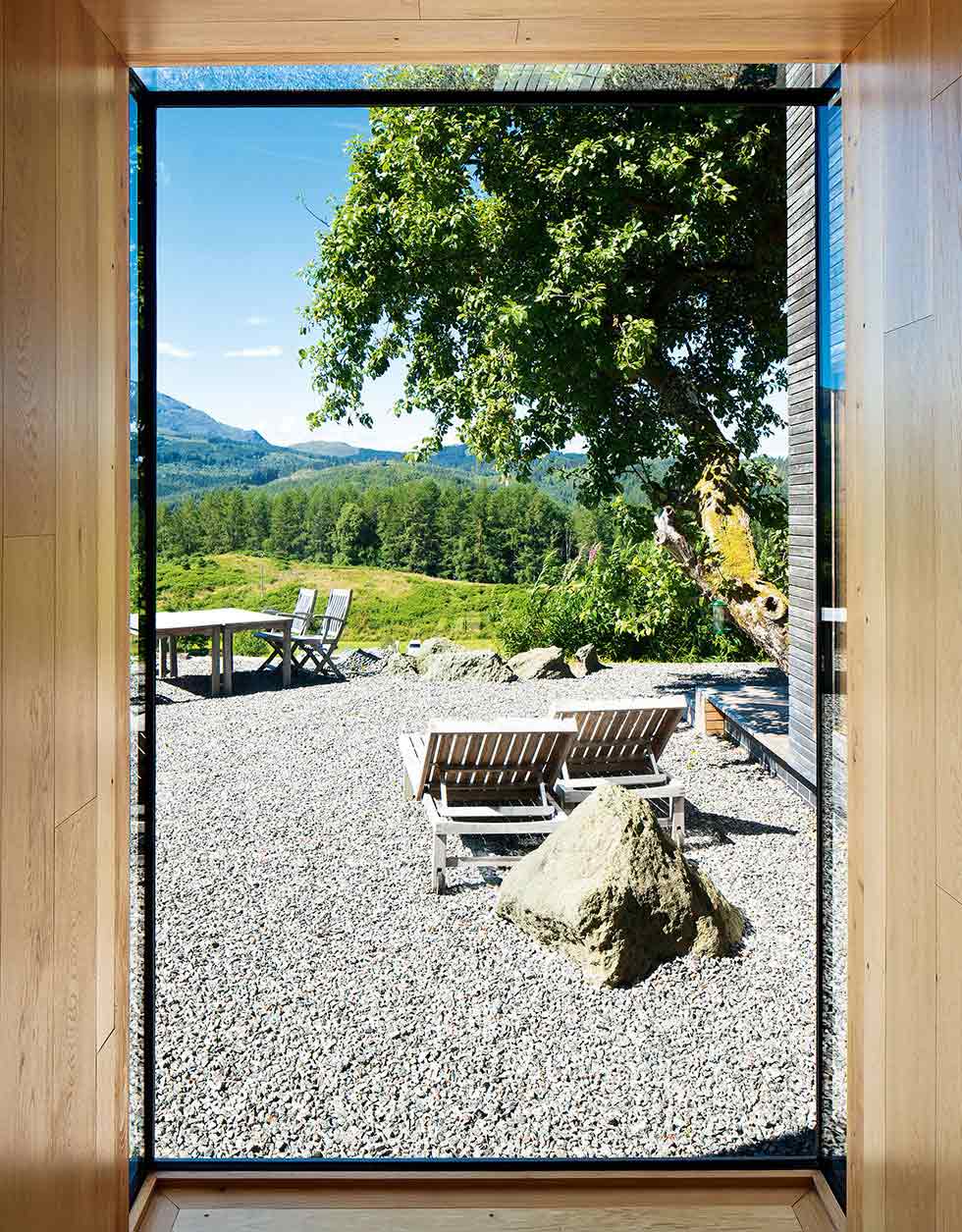