Experience informs that if there is one thing an architect likes better than owning a well-designed house, it is getting his hands on a really shoddy, badly thought out one. So there was a big helping of glee when architect Gregory Phillips first set eyes on his own home. “Everything that had been done to it had been done awfully. It was so shockingly bad,” he recalls, rather cheerfully. “There was an extension at the back of the property which looked more like a mobile home. An extraordinary number of people came to view the house and said, ‘We couldn’t possibly…’ which spoke volumes!”

Nevertheless, you can see why it might have caught the imagination of local buyers. Just as Dorset has its picture-perfect thatched cottages, Yorkshire boasts ruddy, stone-built parsonages and Edinburgh is home to elegant Georgian townhouses, so the north-west suburbs of London have their ideal: the 1930s semi. And Gregory’s East Finchley home certainly conforms tightly to the style guide, complete with bay windows.

But beyond the seductively traditional exterior, Gregory describes a mish-mash of bad maintenance and questionable interior design — pictures show that if the dodgy wiring didn’t get you first, you were likely to be swallowed up by one of the many overstuffed sofas. It wasn’t just that the space had been badly decorated: it was dark, the rooms lacked flow and the house just didn’t conform to the laid-back, family-friendly ideal.

Step in Gregory and his wife, Sara, who felt compelled to buy it. They soon decided to knock every room into shape, leaving the front of the house still unashamedly traditional, but making the most of its semi status by turning the rear and side into the sort of sleek, open space that paved the way for a dramatic addition.

In essence, what Gregory has created is a large L-shaped single storey extension that wraps around the back and into the dead space at the side. But it’s so much more than just an ‘ordinary’ extension. This is a completely integrated addition that doesn’t just add space — it gives the overall layout meaning too.

Instead of a narrow kitchen and separate dining room, these two areas at the rear of the house have had their back walls removed and now spill out into a glorious and luxuriously spacious lounging and relaxing area that runs the full width of the house and beyond. Built on a diagonal line running from the edge of next door’s rather less ambitious extension and then flaring out, this simple means of avoiding a row with the neighbours actually gives the additional area a real dynamism and interest too. Huge sliding glass doors mean that the ample garden seamlessly seeps into the room and light effortlessly bathes the open plan space. Thanks to a generous and protective overhang on the extension’s roof, the doors can be kept open even on rainy days, in order to bring the outside in.

The space is sleek and wonderfully furnished with beautiful Italian sofas, which may possibly owe more to style than comfort. Its broad oak floorboards give the room a honeyed glow that warms what could be an overly minimalist white kitchen. But despite these occasionally lavish statements – the kitchen is by the Italian Boffi brand, the sofas are B&B Italia – the room does feel properly lived in. “Our priority was to keep books and art on display,” says Gregory. To this end, there is a bookcase dominating one wall with a pleasing mixture of titles, while Bridget Riley prints are peppered throughout the house alongside work by the couple’s three young daughters.

Although at first glance the space may give every indication of conforming to the open plan ideal, it is in fact slightly subtler than that. By retaining the old dividing wall between the kitchen and dining room, Gregory has given the appearance of openness whilst carefully screening a work area from the reception space.

“It’s a universal request from my clients: they don’t want their guests to see them cooking, they’re frightened of it,” he explains, at once giving lie to that old chestnut about ‘wanting to be able to chat to my friends while I cook for them’ (anyone who does more than wait for the microwave’s ping will know that there is nothing less likely to create a mood of relaxed informality than desperately trying to keep four pots from boiling over while discussing school league tables).

There is further screening to the side of the extension, where the couple have located their utility room full of the horrors that are needed to keep a modern home and family clean and laundered. There is also a delightfully chaotic office space used by Sara and the girls where rather laden desks do their best to contain a multitude of homework and craft toys.

Of course, one of the facts about undertaking a large building project on one section of the house is that the rest of the house will need attention as well. And to that end, Gregory has given the original rooms a bit of a lick and polish so that they are not completely outshone by the sparkling new addition.

The hall is unusually large — a must, Gregory claims, for a family home: “You need to be able to come in through the front door and put your bags down. In our old house, if you did that the place would have looked trashed.” Although it is panelled, the space also contains a gigantic blue sculpture that encompasses a whole wall — and which shows beyond doubt the family’s commitment to their works of art.

The kitchen/dining/family room is behind the hall and a pleasantly proportioned sitting room is at the front. This room has been artfully furnished with Le Corbusier chairs and the ground floor’s only TV unit.

Upstairs, the oak flooring gives way to acres of soft, dove-grey carpet which runs throughout the four bedrooms. The respect that has been shown towards the original rooms and layout mean that the house still feels like a normal family home rather than an architect’s folly, but the cleanness of the pallete and modern furnishings – bathrooms in particular have been given a rigorous update – mean that it is not completely at odds with the new ground floor space.

Keeping it simple was, Gregory implies, the biggest challenge: “I was the client and the architect and it was terrible because I had so many options! I had to keep reining myself in. I went through all sorts of permutations but my wife made some key requests that were really pragmatic, such as being able to get from her desk to the kitchen fast, and that helped me focus on what the whole family needed.

“I was even toying over where we could put the kitchen — if I had moved it to the extension I could have had a more dramatic space but it actually works much better where it is as you can walk through it from other parts of the house.”

The entire build took five months, during which the family stayed in situ for the first couple of months “until the services were cut off. We moved out when there was no water.” Although Gregory says that the build did not seem particularly quick, for the amount of work that was achieved in that time, it seems he set an incredible pace. Is the finished result as he imagined? “Pretty much. I could have made the extension much larger but actually we don’t need any more space than we have. It works for us.” 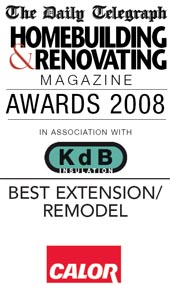 Gregory’s house won this year’s Daily Telegraph Homebuilding & Renovating Award for Best Extension/Remodel because the improvements he has undertaken to the house are both perfectly designed and brilliantly executed. What impressed the judges most of all was the willingness to re-think the conventional open approach to the layout and work out something that was completely true to Gregory and his family’s individual aims — so, for instance, the formal dining space was not exposed to the kitchen as Gregory didn’t want guests to see the mess he creates while cooking. There is no question, however, that the extension has completely transformed the way that the family enjoys the house and made it much more light and, of course, spacious. The design has brought the beautifully-designed garden much more into the house and helped to create a tranquil oasis in the capital.