Extension to a Hampshire Home | Homebuilding & Renovating Skip to content It’s quite possibly the most popular of building projects, but extending and renovating a property successfully takes time and planning. Fortunately for homeowners Sue and Terry Austin, their months spent travelling abroad after selling their barn conversion allowed them plenty of time to consider the kind of house they wanted.

After returning from travelling, the couple moved into rented accommodation and spent 15 months looking for an opportunity when they came across an idyllic village in Hampshire with easy access to London for Sue’s work. The property they found was a bland, four bedroom home built of London stock brick. As Sue describes it was “badly built inside,” with no connection to the rear garden and had small bedrooms. The position of the staircase created an awkward layout on the ground floor, with no clear line through the house.

“We both had a clear view of the space we wanted — a separate lounge/music room and a new open plan entertaining space,” begins Sue. “We also knew we wanted a master suite with separate dressing area. We were pretty clear on the concept of having an extension, but it was the process of finding the right architect that took the time, and getting them to do a feasibility study.

“My sister lives in Winchester and she Googled architects in Hampshire and Berkshire. We had two architects come up with different ideas for the project and ideas of spends, and we ended up going with Andy Ramus (of AR Design Studio),” continues Sue. “He came up with one design and then it was just a case of tweaking it.”

In order to create the additional accommodation Sue and Terry were after, two extensions were decided on. Andy proposed a side extension in the form of a two storey brick tower which would house a utility room on the ground floor and the new master bedroom on the first floor, connected to the existing house via a glazed link which identifies a clear definition between the new and old while bringing light into the building.

A single storey flat roof rear extension would then make way for a large kitchen/dining/living space where Sue and Terry could entertain guests, as well as providing room for Dylan, the dog, to run around. 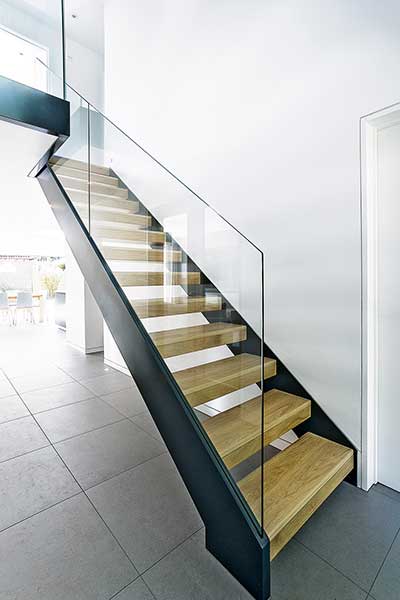 Moving the stairs, replacing them with a new steel and timber staircase with glazed balustrade, and introducing a double-height void also allows light to enter the centre of the home

Working closely with the planners, the case officer advised using the same brick on the vertical tower which is visible from the front, in order to match the existing building and not appear too bold from the streetscape, while the rear extension acts as a contrast thanks to Marley Eternit’s fibre cement cladding.

“There were objections from the parish council and neighbours, but on Andy’s advice we decided to submit a Design & Access Statement to rationalise the design, which helped and our plans went straight through.” 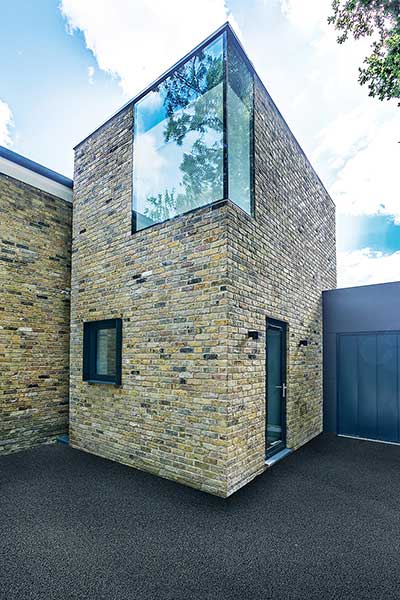 Both inside and out, the house is full of little details which make a big difference — the corner glazing on the vertical tower extension for instance; it adds wow-factor and brings natural light flooding into the master bedroom

Work started in mid-April 2014 with Sue and Terry living in a caravan on site while the building work was underway; Terry working as project manager full-time. Their builder came recommended by a friend.

Fortunately for the couple, Sue’s brother works as a structural engineer and was able to offer his services at what was the most vulnerable aspect of the project — opening up the back of the house to make way for the new flat-roofed extension. A large steel beam measuring an impressive 8.5m long and 450mm deep needed to be craned into place to support the structure and cut into the back of the rear wall. Internally, turning the stairs around was key to reconfiguring the ground floor layout. 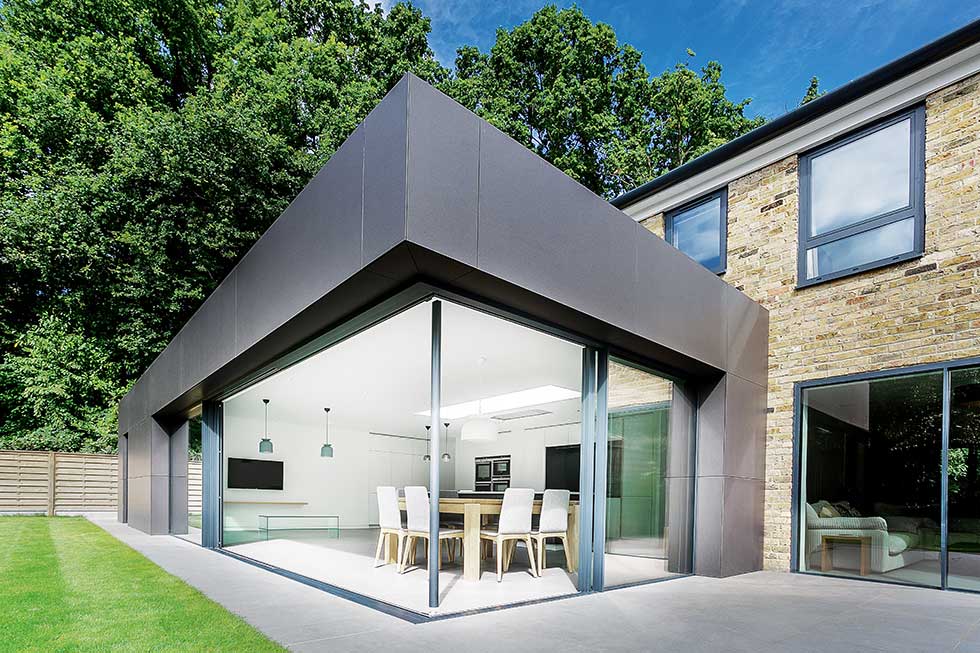 A stark contrast against the existing home’s London stock brick façade, the new rear extension has been clad in Marley Eternit’s fibre cement cladding — the colour of which is mirrored in the powder-coated aluminium window frames 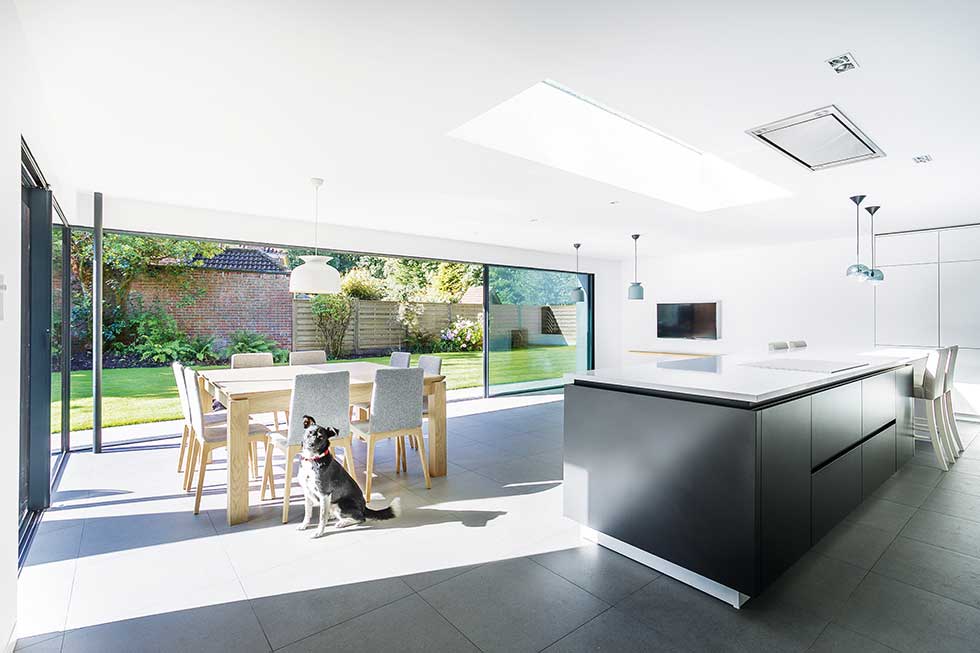 Fitting Sue and Terry’s brief of having a large kitchen/dining/living space, the new open plan rear extension oozes minimalist style with its monochrome Siematic kitchen from Myers Touch, the colours of which are mirrored in the white walls and Stone & Ceramic Warehouse floor tiles which carry out over the level threshold and on to the garden patio 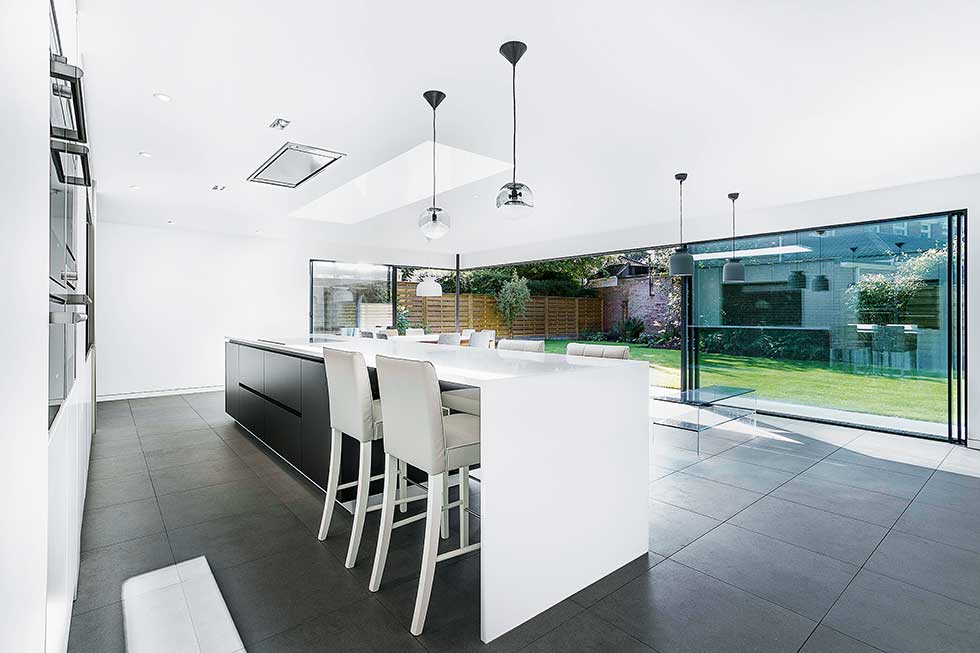 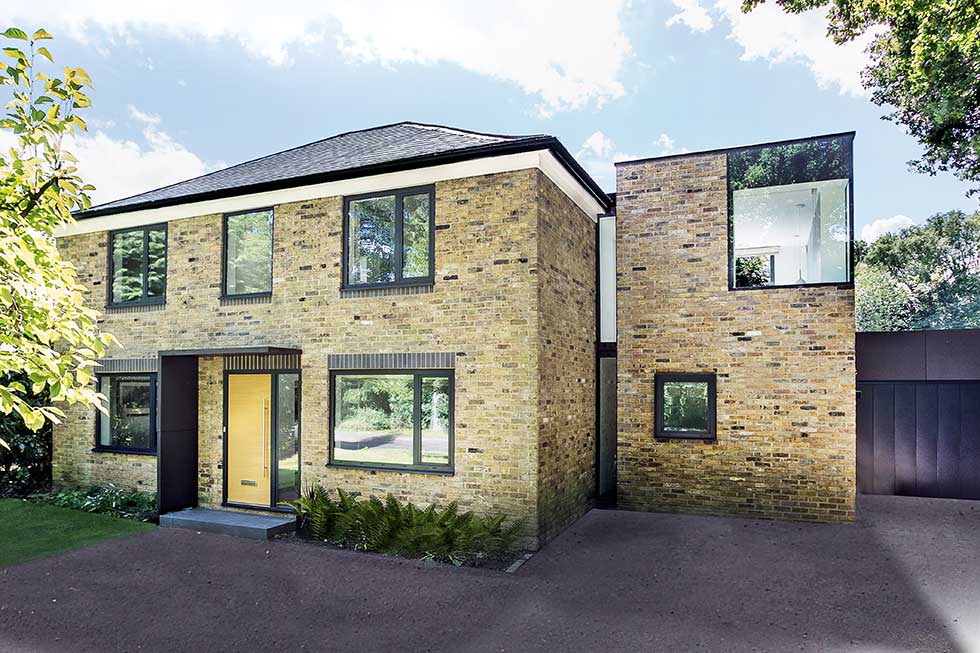 A vertical brick-clad tower side extension blends in with the existing building, offering additional bedroom space. The windows were replaced as part of the whole house remodel. A new slate roof also lends to the property’s modern look