As far as connecting a home to the outdoors goes, especially in a built-up area such as London, Well House – the latest triumph from architect Phil Coffey of Coffey Architects – ticks every box.

Formerly made up of multiple rooms, many of which weren’t used, the new extension and renovation project breathes new life into this four storey, five-bed Edwardian terraced house in Highbury Fields’ Conservation Area.

“The kids were the real driver of the whole thing — the couple were after open plan accommodation where they could keep an eye on the children,” begins Phil.

“With split-level terraced houses there is always the problem of too many bedrooms and not enough living spaces, which makes the house feel top-heavy, and so to create sufficient accommodation on the lower floors we chose to extend out as well as down. By digging down to create a new basement, we needed light to reach this area of the home and that’s where the concept of the lightwell came from — hence the name Well House.

“This double-height void in the centre of the plan connects the varying levels and garden together. The key was to achieve this without it being obvious where the house ends and the extension starts — it was important to make these changes feel like they’d always been there.”

Fortunately, considering the level of internal structural work, the planning process was fairly straight-forward. “The only thing we had to be careful with was the material choices for the rear extension — we chose white render to remain sensitive to the existing property,” says architect Phil.

Problems arose when work began on site and the team hit a large lump of concrete when digging out the basement, right where the planned lightwell was to be. “We had to have that concrete lifted out before work could continue.”

Once the basement had been excavated and tanked, work on the reconfigured layout began to take shape, with the new design offering the family their desired open plan accommodation. Now, from the hallway you enter into the ground floor living space, which has been left open to overlook the new extension thanks to the double-height void, with stairs leading down to the kitchen/diner at garden level, and then down into the family/play room in the basement.

“The rest of the house didn’t require much work — the only adjustments we really made were in terms of storage space and working this into the design using bespoke built-in joinery. We also tried to maintain as many features as we could in order to be respectful and keep the building’s charm and character.”

Glass plays a key part in the home’s new design too. Features include a large rooflight, full-height sliding doors and the inventive structural glazed ‘box’ with its concrete bench appearing to run seamlessly from inside to out.

Indeed, the views have been prioritised, and are accessible from each level. Even in the basement at the bottom of the 6m high lightwell you can still see up and out into the garden. 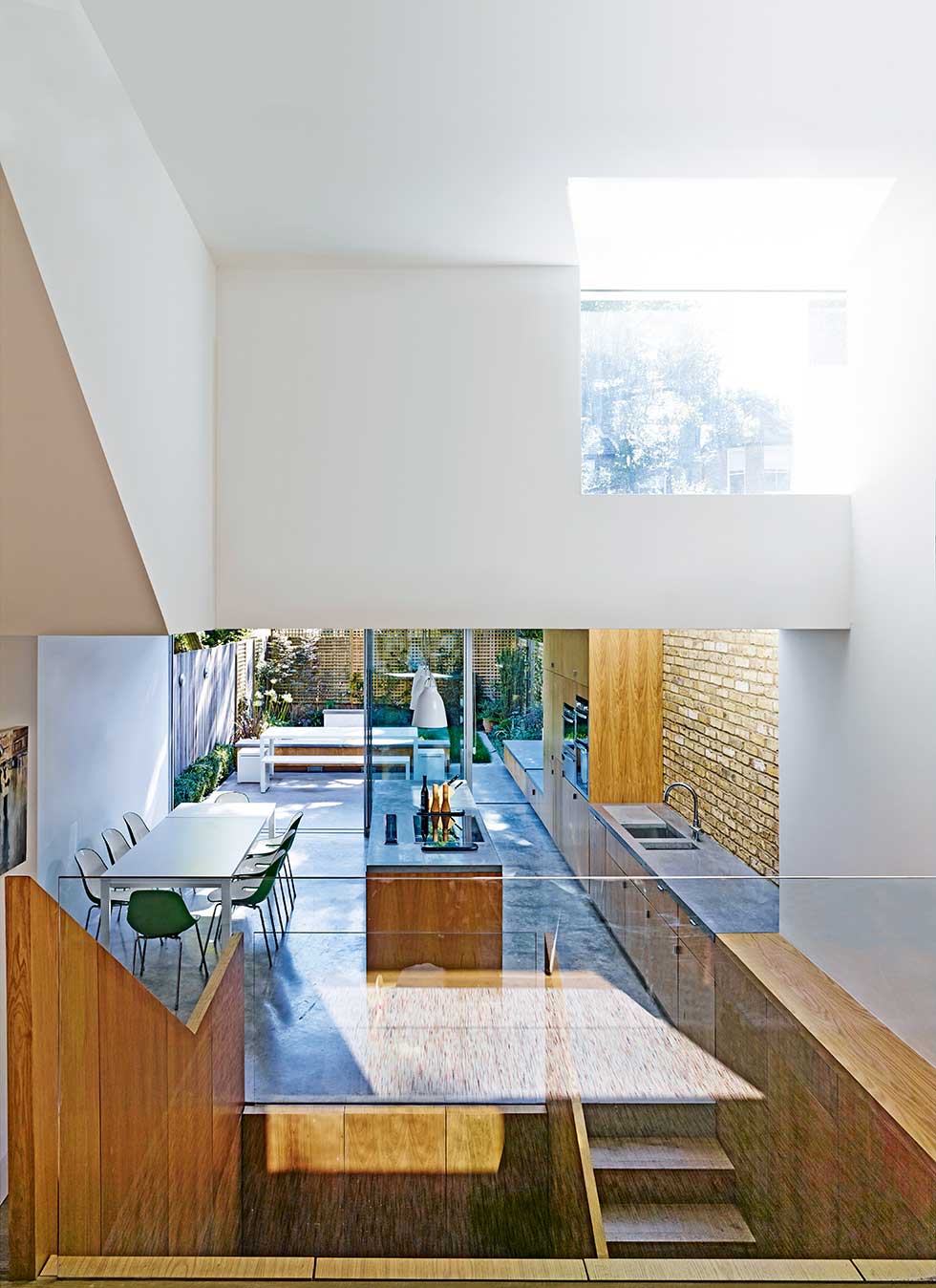 Providing a play on levels within the centre of the home, the new double-height 6m high lightwell allows the front living room to overlook the kitchen/diner and offers glimpses of the garden. The glass and timber staircase also leads down to the basement play/family room. 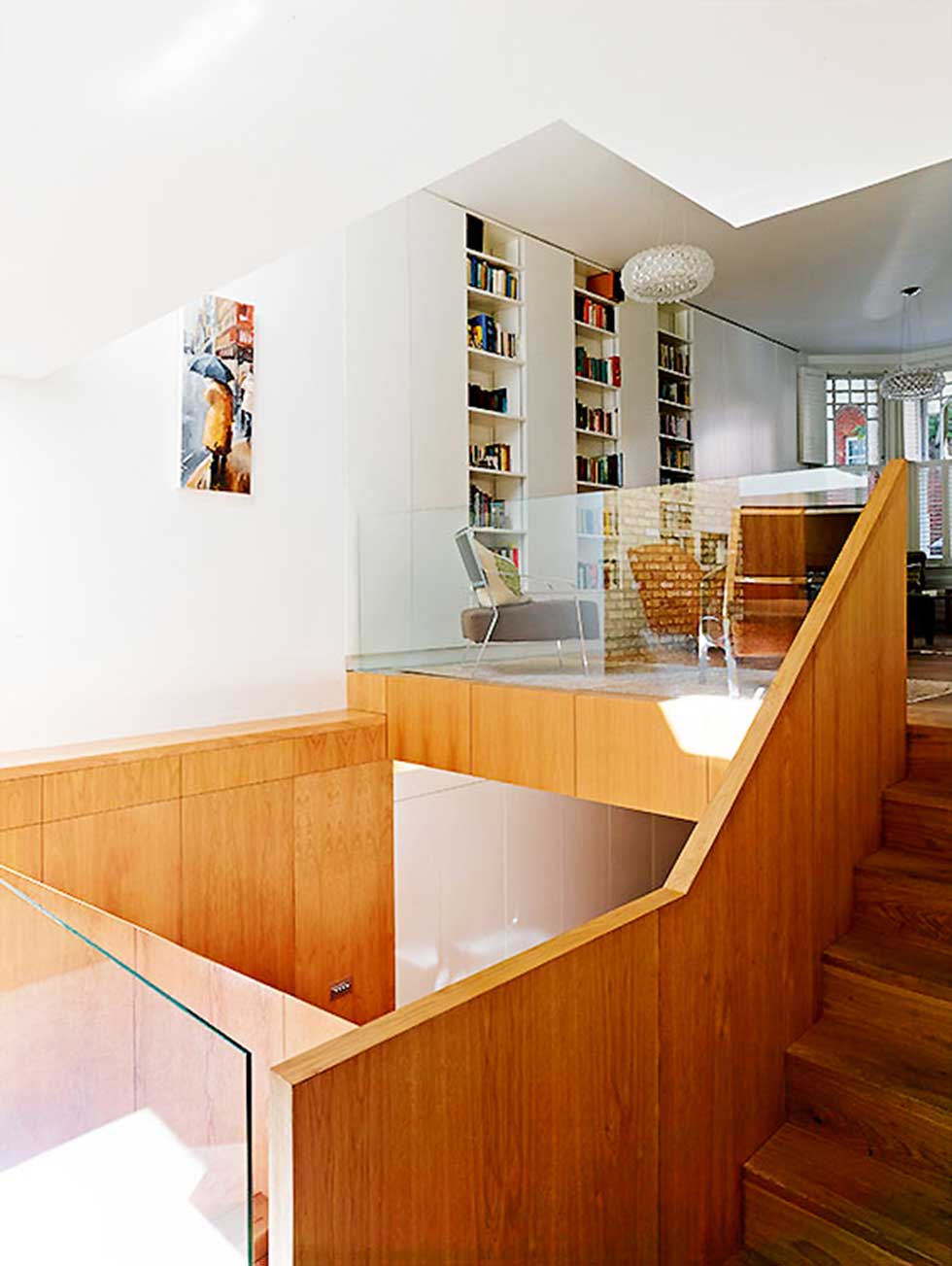 While the period features have been retained on the upper levels, the contemporary spaces in the new extension have been finished to a high standard with careful attention to detail, from the crisp lines to the carefully considered materials. “The concrete flooring and brick walls are both materials which can be used just as well inside the home as they can on the outside, while the use of wood in the kitchen and for the staircases adds warmth.” 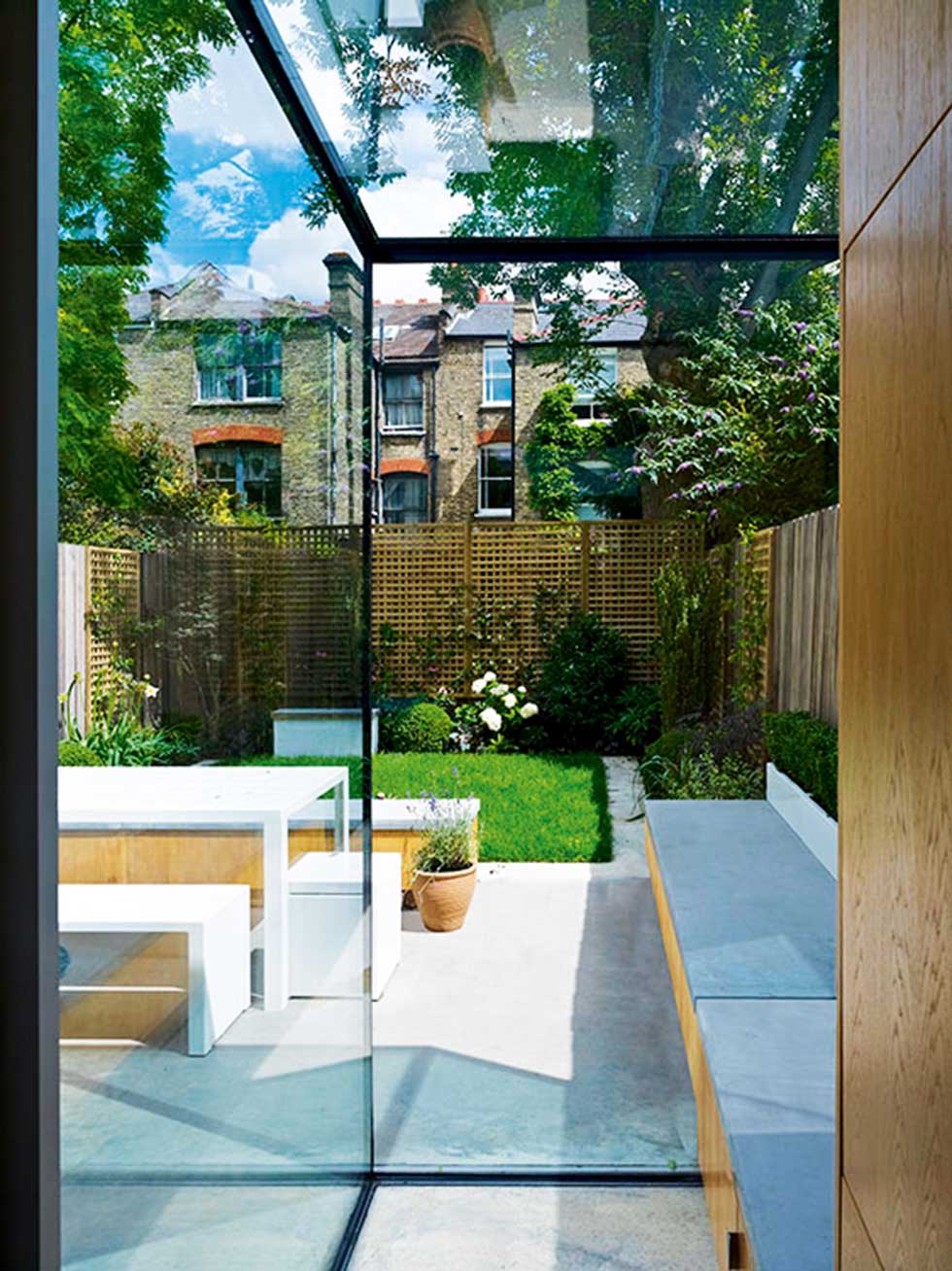 A real focal point of the home, the frameless glazed box leads off the rear extension and features a concrete window seat that appears to continue on into the garden — perfect as a quiet reading spot, while the glass ceiling allows glimpses of the sky. 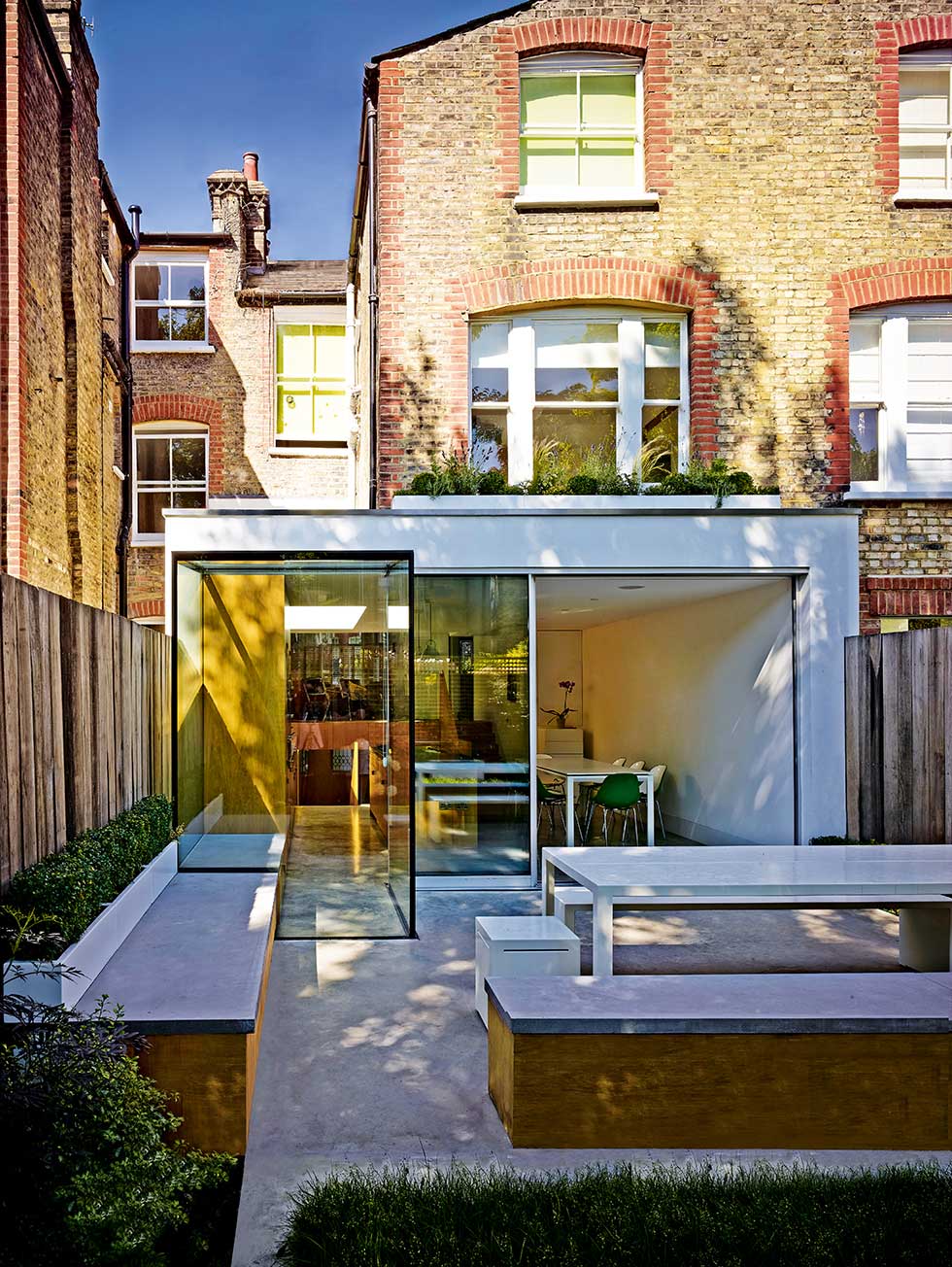 “The large sliding doors and structural glazed box also bring in plenty of light and help the house to feel connected to the outside,” continues Phil. “The trick with sliding doors is not to think about the glass, but think more about the views instead.”