Gold has become a safe bet in these uncertain economic times, and for Katharina and Patrick Roberts choosing gold was a decision which has undoubtedly paid off. The couple transformed their traditional detached home by extending both down and out, introducing a flamboyant, sculptural wing-like roof clad in a gold-coloured copper alloy that would not look out of place in a modern art gallery.

“This was our first attempt at a building project and I think we were a bit naïve about what would be involved,” says Katharina, a GP. “I’m originally from Germany and came to live in the UK about 15 years ago. Because we’re both doctors we’ve moved around quite a lot. Then Patrick got a job in Torquay and we wanted to find somewhere close to the hospital.” 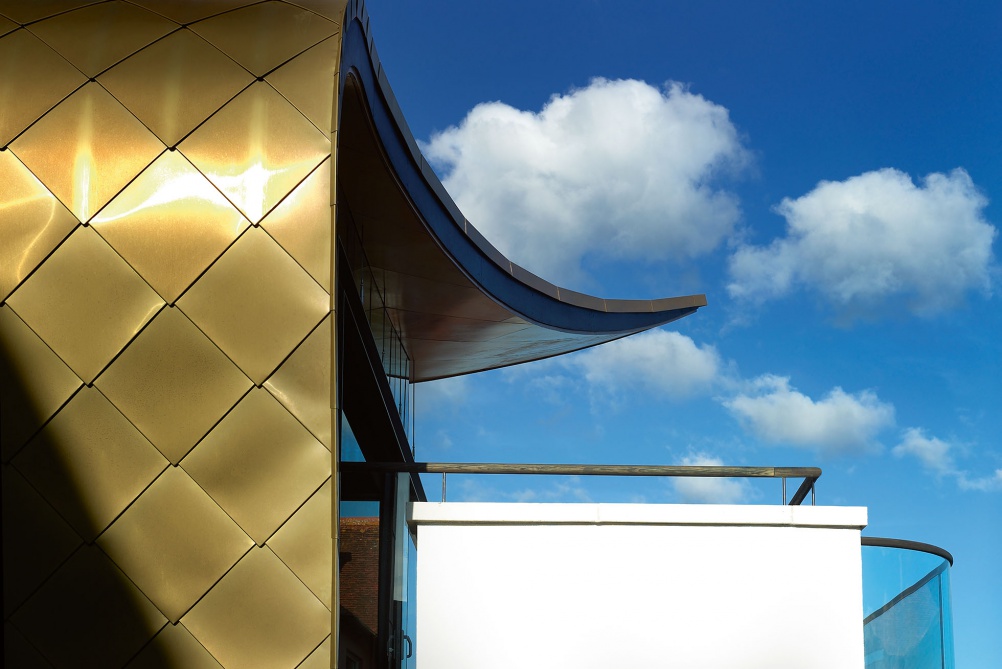 The couple have two sons – Max, ten and Thomas, eight – and searched the area for six months before finding their current home in 2004. Attracted by the elevated location and amazing sea views, they could immediately see potential to enlarge and personalise the 1930s property.

The house is Arts & Crafts in character, and occupies a large sloping plot, with extensive panoramic views over Torbay — from Berry Head to the distant Lyme Bay to the south-east.

Externally, red terracotta tiles to the first floor contrast with the white-rendered walls below, but despite its obvious qualities the house struggled to engage with the garden and the views beyond. It also failed to exploit the full potential of its accommodation and the existing small dark basement areas were used only for storage.

Enter Stan Bolt, a local architect well known for his award-winning contemporary designs. Katharina and Patrick had seen Stan’s work featured in the national press and invited him for a visit. By this time the family had lived in the house for three years and had grown to understand its qualities and shortcomings.

“We knew that the back of the house didn’t look great, and we wanted additional guest accommodation for family and friends,” Katharina explains. “An elderly couple had lived here and the decor was quite old-fashioned. Our hope was that Stan could give us a far more modern home, connected to the garden, without spoiling the character of the existing building.”

Stan’s suggestions were characteristically bold and striking. A larger ground floor extension to the new basement section would form a plinth for the upper ground floor extension and adjoining decked terrace. Fuelled by the desire to retain the form and fabric of the existing building, the extension was designed as a sculpted pavilion that connects lightly to its host.

This allows the terracotta-tiled façade to remain uninterrupted, and highlights the richness and individual qualities of both the old and new. “The whole extension appears to float independently of the old house — there’s been no attempt to camouflage the new part, it’s totally distinct,” says Patrick.

Following the tender process, a building contractor was appointed who contributed a high degree of care and skill to the project. Work covered a wide spectrum — from the laborious task of manually excavating the basement to create a self-contained guest apartment, to the delicacy and ingenuity of forming the free-floating ‘wing’, supported simply on glass, which acts as an extension to the existing house.

“We chose to carry on living here during the building work, and that was a bit of a nightmare,” says Katharina. “The first six months were fine, because the builders were working outside, but then it really began to impact on our lives. More and more of the house was taken away and everything was held up on acroprops before the structural steelwork was introduced. We were living in a dark, boarded-up shell waiting for the glass to go in.”

From the street the house appears unchanged, with original single-glazed wooden windows retained to the front façade, but inside the space has been totally remodelled. Behind the oak front door it’s now possible to look straight through the hallway to an external staircase, which leads down from the balcony to a lush garden. Soil excavated from the basement was used to remodel the garden and create an area of flat lawn.

The Roberts had already mounted solar panels on the rear roof of the house to provide their hot water, but rainwater is now channelled from the roof to a large underground collector for reuse in the garden.

Internally, finishes have been kept simple with white walls and wooden and tiled floors highlighting the volumes and spaces of the building. The new open plan kitchen/dining room has been positioned so that it opens onto the large terrace.

Patrick and Katharina imported their kitchen from Germany, along with the contemporary table and bench seat. “I wanted a Siematic kitchen because I’d grown up with one,” says Katharina. “In fact, my mum still has her original 1960s kitchen.” 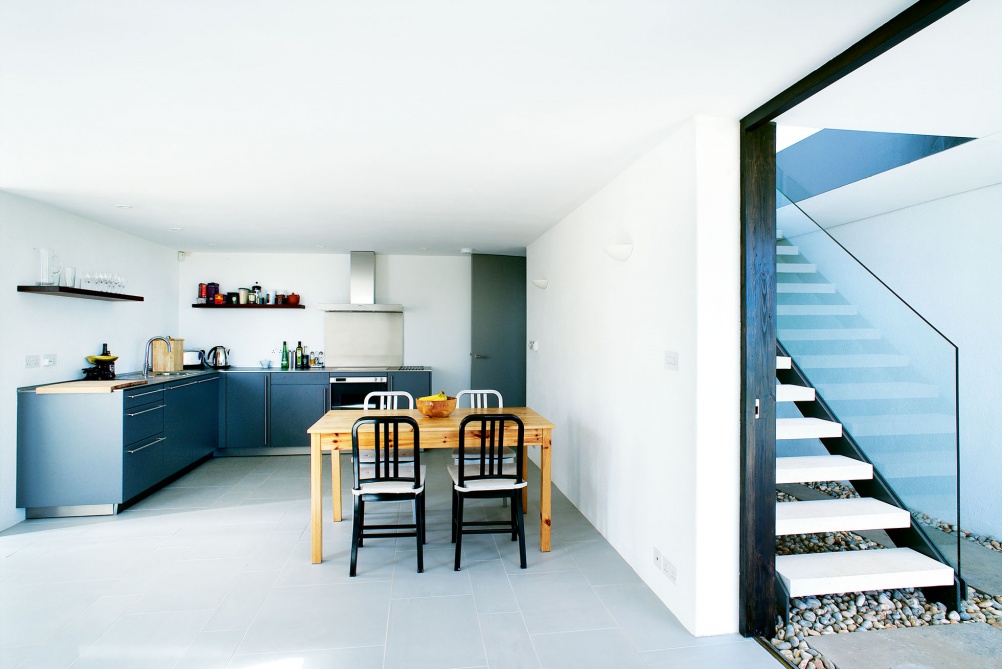 Sliding open the glass doors in the kitchen connects this space to the terrace, which the family use as an integral part of the house. Even in winter they have been able to push back the doors to enjoy the sheltered outdoor space beyond — looking out at the view and the amazing soaring roof above.

“Since the house was completed last July we’ve had non-stop visitors staying downstairs in the flat,” says Katharina. “In August the Red Arrows usually fly over Torquay and we have a party. The view was always amazing but this time everyone could spill out on the terrace and watch the air display in style.”

How They Got That Gold Roof

The abstract canopy rises from the lower ground floor and curves over the extension, providing shelter and shade to an otherwise totally transparent volume. This wing-like structure is clad with gold-coloured copper-aluminium alloy interlocking shingles — as a modern, reptilian interpretation of the original terracotta tiles.

Its profile is constructed entirely from glue-laminated birch plywood beams and noggings, forming a tapering lattice structure which is sheathed top and bottom in three layers of 6mm plywood. The birch finishes to the underside (ceiling, soffit and wall) replicate the structure of the hidden plywood sheathing. Other than two 40mm solid-steel bar feet at lower ground floor level, the canopy’s only means of support are its structural glazed gable infill panels.

“The gold-clad roof was a first for Stan,” says Katharina. “We were a little worried that our neighbours might not approve.” Concerns about how the neighbours might react to such a radical design proved to be unfounded, however, and the local planning authority fully supported the application.

“The roof is an abstract form and quite dramatic, but after considering zinc and copper the ‘Tecu Gold’ offered an ideal contrast to the main house,” says Stan. “It’s a durable material which retains its colour and is well suited to an exposed marine environment.”