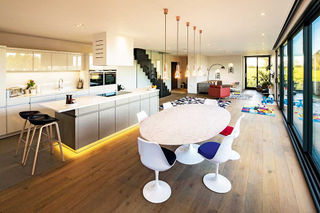 One of the more common complaints about houses with poor build quality is noise transfer, both from outside sources but in particular between the rooms in the house itself. The ability, if that is the right word, to hear someone having a wee from distant corners of the house is many people’s worst fear — and poor acoustics is something that could, and should, be considered at the design stage of a project.

The Building Regulations for sound (Part E in England and Wales) are split into two sections: E1 and E2.

Part E was rewritten in 2003 and E1 in particular has proven to be very successful in reducing the number of noise complaints between neighbours. E1 party walland party floor sound reduction levels were increased significantly in the revision. However, the improvement in E2 protection levels was limited and their current requirement for 40dB (decibels) of sound reduction in internal walls and floors isn’t very demanding.

Any masonry wall or concrete floor will meet Part E2 requirements, and timber or steel walls or floors only require the addition of some insulation and a slightly thicker plasterboard to be used. E2 does not require soundproofing around en suite bathrooms or in walls where there is a door. What if you think this isn’t enough? Can you design out noise issues?

One simple solution for those wanting an upgrade on their own home acoustics would be to adopt the much more demanding standards set out in Part E1 for party walls and floors, for internal partitions. This has been made even easier by the adoption of a set of robust details which are widely used by commercial housebuilders who want to comply with E1 but wish to avoid expensive and time-consuming acoustic testing.

The robust details cover all forms of construction for both walls and floors and are freely available on the web. They are designed to comfortably beat the standards set out in Part E1, so that there is a little leeway to cover less than perfect installation on site.

Another approach would be to look at a proprietary standard, like Saint-Gobain’s Multi-Comfort standard which combines the Passivhaus standard for energy efficiency with air quality and an acoustic standard set close to Part E1. ‘Airborne sound insulation up to 68dB’ is what is offered. Needless to say, Saint-Gobain may have good commercial reason for promoting such improved standards because they sell plasterboard and insulation — two of the main products required.

But that doesn’t make the Multi-Comfort standard a bad idea. Any upgrade to the specification involves extra expense, but upgrading acoustic standards on internal walls and floors is not going to have any significant impact on the overall budget, adding between 0.5% and 2% to overall costs depending on the level of soundproofing involved.

In addition to its other benefits, mechanical ventilation with heat recovery (MVHR) systems are sometimes specified by planners when homes are built in noisy locations (flight paths, motorways, etc.) and they think standard window-mounted trickle vents would act as noise pathways. MVHR, which does away with the need for trickle vents, is seen as a solution because it separates the internal and external spaces.

However, MVHR works by pumping air around the house through ducting and the ducting can itself act as a noise pathway between rooms. Care needs to be taken when designing and installing MVHR systems to ensure that the duct runs are as short as possible and that there are as few corners as possible. The longer and more complex the layout, the larger the central fan needs to be and the more noise it will make.

The ‘No Noise’ Approach to Soundproofing

But the question is, will this improved acoustic quality really make life better for the inhabitants? It’s not altogether clear that it will. The problems caused by internally generated noise are subtly different from noisy neighbours or the roar of traffic. For a start, you have some control over what noise emanates from your own house and if there is too much of it coming from a teenager’s bedroom, then one less technical option is to ask them to shut the door and turn it down.

Furthermore, there is evidence that the internal noises that tend to annoy new homeowners the most are not things which can easily be insulated against. Research conducted by the NHBC after Part E was upgraded in 2003 showed that the main complaints from owners of detached homes didn’t concern noise transmission between floors or through walls, but rather creaking floors and stairs, noisy extractor fans, or water pipes knocking. In fact, creaking floors alone accounted for nearly half of all noise complaints logged by this study.

When the American timber business Weyerhaeuser launched its UK floor I-beam business in the 1990s under the name Silent Floor, it wasn’t referring to its acoustic performance (which, in its unimproved state, is actually very poor) but rather to the fact that it promised to eliminate floor squeaks. It would appear that the issue for many is overall build quality, rather than anything inherently inadequate in the acoustics specification.

Limiting Noise Through Your Material Choices

In addition, there are several interior design fashions around which do little to help acoustic matters, and one would do well to pay attention to these before upgrading the acoustic qualities of walls and floors.

You could spend serious money on acoustic upgrades to your surfaces and still end up being disappointed with internal noise.

It’s worth noting that sound is not measured on a linear scale — a sound 10dB louder is in fact twice as loud; 15dB louder is three times as loud. But the Sound Reduction Index measures the impact of soundproofing. In reality it means:

What are the Options?

The science of sound is quite complicated and acoustic insulation is therefore a relatively complex field, as far as housebuilding is concerned. Noise is routinely referred to in decibels (dB), and soundproofing tends to be measured in decibel reduction. But the decibel scale is not easy to understand and there are different ways of measuring sound reduction.

Sound itself moves in different ways: airborne sound is easy to understand, impact sound less so, as apparently small sounds can carry and even amplify as they travel through solid materials like pipes or across hard surfaces. Flanking sounds are ones which arrive by indirect routes, such as through side walls or floors. The frequencies of sound also matter: measures to stop a high-pitched whine may not be effective against a deep-thumping bass sound.

What acoustic insulation hopes to do is to reduce the overall effect of a cocktail of sounds. There are three basic methods of improving sound insulation:

The insulation suppliers have many materials and solutions for the first two methods: acoustic insulation, sound-blocking boards and planks, resilient bars and much more. Compartmentalisation, on the other hand, is about not leaving holes in floors or walls. It’s all to do with build quality.

When the original research was being carried out for the rewriting of Part E, it was found that many beam and block middle floors, which had been specified because of their superior mass and soundproofing characteristics, were in reality performing rather badly. Closer investigation found that plumbers were routinely taking out blocks in order to run pipes through the floor, and not bothering to fill in the voids afterwards. This causes a sound pathway, thus making a perfectly good idea ineffective.

That’s not to say it’s not worth improving the sound performance over and beyond meeting the 40dB standard imbedded in the Building Regulations. But logically, it might be better to think about building a quiet room or two, rather than trying to improve the performance of the whole house.

The idea of a quiet room is being promoted by British Gypsum through their Rooms Made For You website. Their Sound Solutions offer useful advice (including a consultant service) and techniques for creating a quiet room in both new build and existing houses — aiming for around 55dB.

The improvements all add a little depth to the existing walls, ceiling and floors and are therefore not likely to be terribly practical as a whole house retrofit solution, but could be immensely helpful in improving the sound reduction in a particular room. If noisy neighbours are your problem, and negotiation proves fruitless, you might just be able to make tangible improvements to your life by creating a quiet bedroom.

Large open plan spaces, hard floors, glass and high ceilings are a combination that will cause echo. As these design traits are common in commercial spaces, the solutions tend to be commercial too. British Gypsumhave been looking at introducing residential solutions for these traditionally commercial problems but while sound-dampening plasterboards are available, the other solutions tend to be the type of waffle-effect boards you might find in offices. The design of these is improving to become more palatable to homeowners, but there is a way to go.