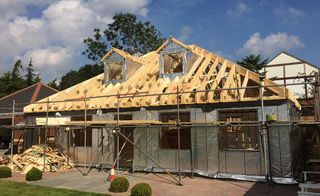 Roofs are one area of housebuilding which is changing fast. In Victorian and Edwardian times, there was really just one way to build a roof and its still widely used. But since then we have seen the introduction of many other options.

The traditional option is steeply pitched, rarely less than 35°. This reflects the weatherproofing requirements of older roofing materials like thatch and peg tiles.

There is nothing technically challenging about building flat roofs, which, incidentally, are never flat but are always constructed to a fall in order to stop rainwater pooling.

But it wasn’t until the 1950s that cheap and reliable materials for covering these structures became widely available and this started a boom in flat roofed extensions across the country.

Trussed roofing appeared in the UK in the 1960s and rapidly took over the new housebuilding scene. Trussed roofs are available in fink truss and open or attic truss options (detailed below).

Panelised roofing such as SIPs (structural insulated panels) uses large pre-insulated sheets, laid across roof beams. The beams will typically be placed along the ridge, at the eaves and halfway between the two where they are known as purlins. Once the purlins are in place, the panels can be craned in in a matter of minutes.

Curved roof shapes are currently the height of fashion, at least on upmarket builds. They are generally covered in either a metal like zinc or copper or with a green roof, made up of turf planted with sedums.

In structural terms, they tend to be variants on flat roofing using curved timber glulam beams under a plywood covering.

There is enormous interest in creating green or turf roofs, which are perhaps the most obvious sign of a green-minded home. In fact, these are nothing new and were used in parts of Scandinavia and Scotland for hundreds of years, but today’s green roof is a very different beast.

The requirements for levels of insulation have had a dramatic effect on how we build rooms in the roof. If you leave the loft space empty, you can simply roll out insulation above the ceiling.

But if you want to use the loft as living space, you have to insulate directly under the sloping roof. However, the amount of insulation required is deeper than the rafters or trusses. Extra insulation can be added to the underside, but this reduces headroom.

There are two common solutions:

First, decide how you want to use the space. If you have no intention of using it as living space either now or in the future, you are probably best off using a simple fink truss system.

However, if you want to ‘live in the loft’, then you’ll have to choose one of the other methods. There may not be that much difference in cost between them, and it may pay to go with what your designer and/or builder is most comfortable with.

If you want a cathedral or vaulted roof, then you’ll have to work with the designer. It’s unlikely to work with any kind of truss, but can be done using traditional rafters laid on beams, or sometimes with panelised roofing elements.