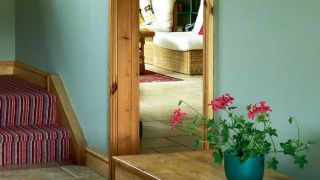 Most self builders never think about how their internal walls should be built. If they have hired an architect or a designer to draw up plans, they will happily go along with what they suggest. If they employ a system build approach, such as timber frame or SIPs (structural insulated panels), they will adopt whatever the package company offers.

There may be good sense in this, but it’s still worth considering the options.

Internal walls are usually defined as walls that divide rooms, as opposed to the insides of the external walls. They come in two distinct types:

You often can’t tell the difference visually, but structurally they are very different.

A loadbearing wall acts as a support for a roof, a floor, a beam or another wall above it. It needs to be stronger than a non-loadbearing wall. Crucially, it also needs extra support under it, usually an additional foundation trench.

In a new build, the structural issues will be dealt with at the design stage and you shouldn’t have to pay too much attention to whether a wall is loadbearing or not.

However, it can have a major effect on renovations, especially when you want to take down an existing wall. In these cases, it is vital to know whether or not the internal wall is loadbearing:

Internal walls can be built up in a number of ways. In block-built homes, the most common method is to use blockwork for the load-bearing walls, and timber studwork elsewhere. Typically, this translates as blockwork walls downstairs and timber studwork upstairs, especially if the roof is built using trusses, which transfer all the weight to the side walls.

Of course, studwork can be used for load-bearing walls — in timber framed homes, timber stud walls are used everywhere.

Studwork doesn’t have to be timber. Many builders like to use steel channels, which are lightweight and fast to erect, making it ideal for partition walls where loading isn’t an issue.

Using blockwork for loadbearing walls is usually more straightforward whereas studwork requires more thought and possibly the doubling-up of uprights.

The downside of using blockwork for internal walls is that it is so much heavier that it usually requires extra support at floor level. You could:

One of the main reasons people use blockwork for internal walls is that it offers better soundproofing between rooms.

The soundproofing levels between rooms are governed by the Building Regulations (Part E2 in England and Wales, 5.2 in Scotland), which call for a minimum sound reduction of 40dB (decibels) between rooms. This is not particularly onerous to achieve by using either of the main methods of construction.

Blockwork walls will naturally achieve this level, but studwork walls require some additions to meet the standard. The key here is to pack acoustically enhanced wool insulation between the studwork and to use either 15mm or acoustic-grade plasterboard on the walls. This easily meets the 40dB standard. You can add a second layer of plasterboard, or use heavier boarding to further enhance the soundproofing.

Generally, studwork walls are cheaper to build than blockwork. If you choose to upgrade the soundproofing in them, it will cost a little more but it will still probably be cheaper than using blockwork.

You can go to great lengths to soundproof your studwork bedroom walls, but a bedroom is only as soundproof as its weakest link and that’s usually the door. Tips include:

En suite bathrooms can be a problem as well because they are connected to the bedroom but exempt from Part E’s requirements for 40dB sound reduction. It is easy to upgrade the specification in stud walls not covered by Part E to meet the same standard. It is also relatively easy to improve on Part E’s requirements by using more or thicker plasterboard.

Another issue with timber-frame walls is that you have to plan ahead for items such as radiators, basins and mirrors. One approach is to install timbers (known as noggins) between the vertical studwork to carry the weight. This is simple enough if you know exactly where everything is going.

Alternatively, you can use loadbearing wall boards such as Fermacell or Habito at the plastering stage. These are much more expensive than standard plasterboard but you can fix heavy objects into them anywhere and they also act as good soundproofing. Lighter loads, such as pictures or wall hangings, can be easily dealt with by using plasterboard wall plugs.

A good tip is to photograph every studwork wall before it is covered up as it can be difficult to locate studs afterwards. Some self-builders will even keep records of where the studs are located, but most rely on a studfinder, a specialised metal detector that picks out the nails or screws used to fix the boards to the studs.