Robert Wilson has radically overhauled a neglected period home, not only adding a new storey and extending to the rear, but creating a thoroughly energy-efficient home in the process.

The architect lived opposite the 19th century house in south-west London. When it came in the market in October 2010, he had a buyer for his flat and was looking for a project. Despite the state of the property – which had pigeons nesting in the roof – he saw its potential and decided to put in an offer.

Turning it into the stylish, well-insulated house it is today was not without its dramas, but Robert has shown what is possible when you really commit to retrofitting an old home.

The double-fronted period house was an unusual find, placed at the foot of a sloping street mainly occupied by flats in three or four storey-high buildings that dwarfed the existing building in comparison. Robert believes the property was the original farmhouse for the lavender fields that were present on site in the 1800s and, over time, became ‘semi-detached’ to the neighbouring property.

Owning architectural practice Granit Chartered Architects, it was natural for Robert to be keen to explore the possibilities of the project. He decided to seize the opportunity to create an energy-efficient home by retrofitting products and rebuilding with green materials.

Robert had to gut the house – giving him a good chance to improve the thermal performance of the fabric of the building – but he also wanted to increase the size of the property. Knowing how long it can take to gain approval, Robert approached the planning process in an unconventional manner — coming up with three versions of a similar design and submitting three applications.

Essentially Robert intended to keep some of the internal walls and replace the old kitchen and lean-to at the rear with a 64.3m² two-storey extension with side bay windows facing on to a courtyard. One variation featured a loft conversion and another featured an entire third storey — the planners approved the design for a third storey and rear extension. 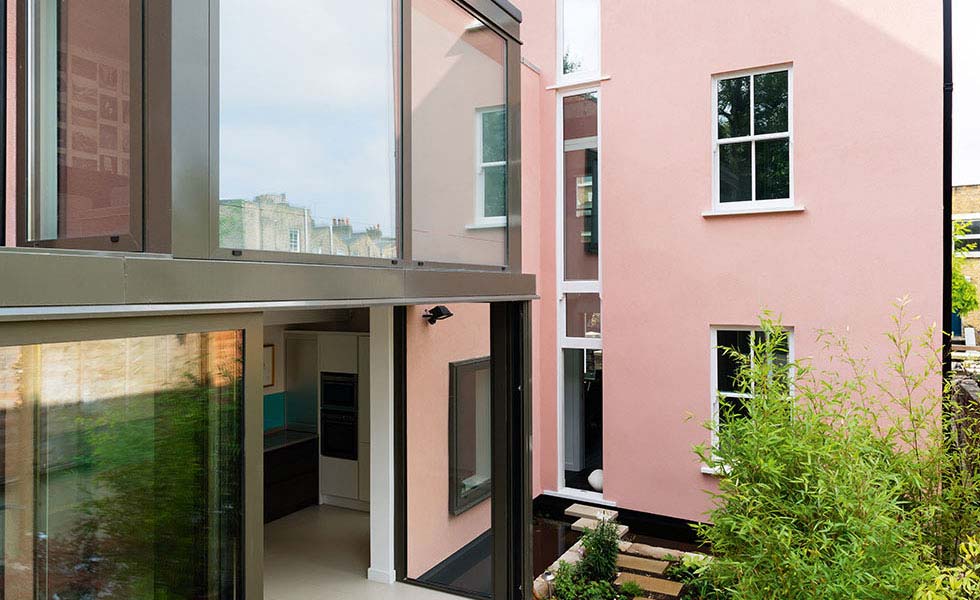 On the ground floor, the glazing can be slid right back, opening the kitchen to the courtyard garden. Upstairs, a privacy screen has been applied which allows the light to flood in without allowing the neighbouring homes to be overlooked

Robert decided to make his new home as energy efficient as possible and generally bought products he was familiar with through his work as an architect. Although his experience with supply and fit was good, sourcing was piecemeal and slow because he couldn’t find a company that could offer the whole package.

“I could find a firm to supply and install the external insulation to create an airtight house, but not one that dealt with the heat recovery ventilation system too, which my builders ended up fitting,” Robert explains. “The thinking really needs to be joined-up, because what’s the point of an airtight house if it isn’t ventilated properly?”

Consequently Robert had to do his research carefully to make sure the products he chose were compatible with one another and weren’t going to be difficult to fit.

Robert champions the brilliance of an energy-efficient envelope, saying that the best thing any self-builder or renovator can do is to take a fabric first approach. So, his house is extremely well insulated with an air leakage test rating of three. (Zero is completely sealed and 10 is the minimum allowed under Building Regulations.) He also had thermal imaging photographs taken to show where heat was leaking, which identified leaks around the gutter (that he later had repaired). 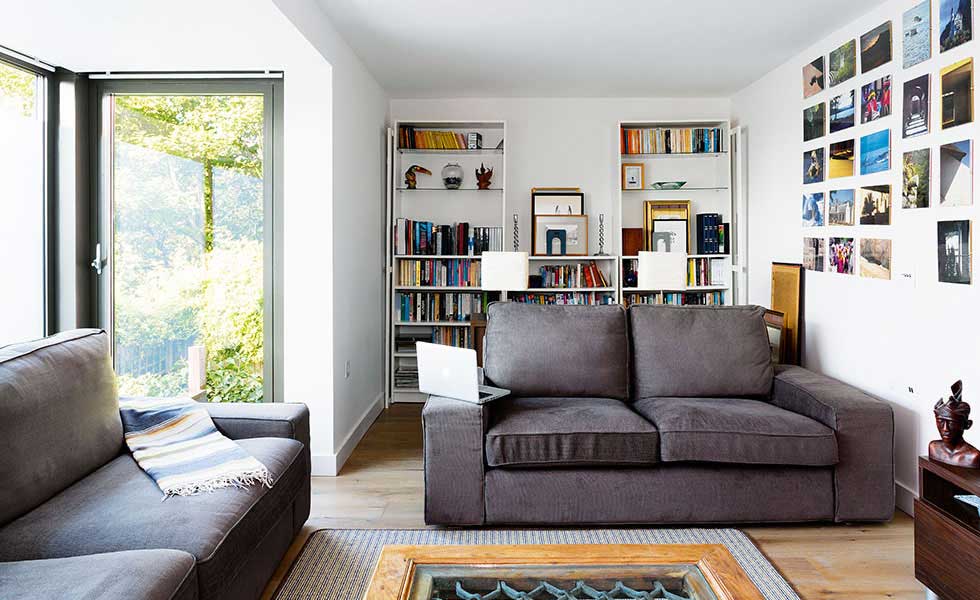 Work started on the project in October 2011. He budgeted around £300,000, sold his flat, and raised finance through a lender.

But in January 2012, in the midst of the third storey being built, work ground to a halt when the builders walked off site. Robert believes they thought they had under-quoted for the work, and had not realised the extent of what was required.

The following four months were a difficult time for Robert: he was out of pocket and looking for another builder, yet paying rent and unable to draw any additional funds until the house was watertight.

By April, Polish building company Best Place 4U were on board, who turned out to be extremely efficient. However, as the project progressed, the house proved to be in a worse state than Robert first imagined, with most of the internal walls needing to come down and large parts of the external walls needing to be rebuilt.

On reflection, Robert says he probably should have knocked the whole lot down and started again. It would have saved him the five percent VAT for the renovation work, as new build are zero-rated.

Robert moved into his partly finished home in December 2012, making use of the new bedroom and shower room in the extension until the house was finally complete in August 2013. The project had taken much longer than anticipated but it’s clear his efforts have been handsomely rewarded. The pink, symmetrical façade embraces its original architecture and is a reminder of a bygone age in this busy city suburb — yet restoration with modern materials belie its historical roots, making the home extremely comfortable to live in.