When Alex and Sophie Nicholls relocated to Winchester for Alex’s job, they found house prices in the area to be quite high.

The solution was to buy a smaller home than they had envisioned, giving them the scope to extend and make it their own.

In September 2011, they came upon a detached, three bedroom 1950s house. Built in 1957 as part of a development, it was fairly ordinary and just ripe for a makeover.

They wanted to create a modern, open plan home which would allow them to spend time together as a family in one big multipurpose living space. Other properties in their area had been extended and they found one nearby which they liked the look of. When they found out that local architect, Andy Ramus of AR Design Studio, was responsible for the design they approached him.

Having lived in Sydney for a couple of years, the couple wanted to bring some of that indoor/outdoor living to their new home. They also wanted the open plan family space to make the most of the site’s views and let in lots of natural light. On top of this, they wanted additional bedroom accommodation upstairs. 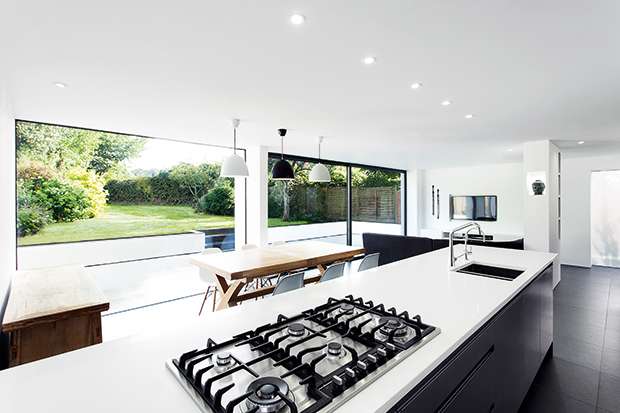 Andy’s imaginative design leaves the front of the house virtually unchanged (aside from updated windows and a new front door). To the rear, it is unrecognisable — a large charcoal box extension has been added at ground level, with a smaller box on top which is clad in western red cedar.

The ground floor has been partially excavated to lower the construction so the entrance to the garden sits slightly below the lawn which can be accessed by a few steps. Back inside, the ground floor consists of a large kitchen, dining and living area. Three large glazed panels form a wall, and these full-height windows allow free flow of light into the extension. Strategically placed ‘fins’ poject into the room to create defined zones in the open-plan area.

On the first floor there is a generous master suite with a seperate dressing area and an additional bedroom. A combination of recessed and flush frameless windows light these rooms — the composition of which was influenced by the ancient Greek theory of the ‘golden ratio’ in order to provide a well proportioned and balanced rear elevation. 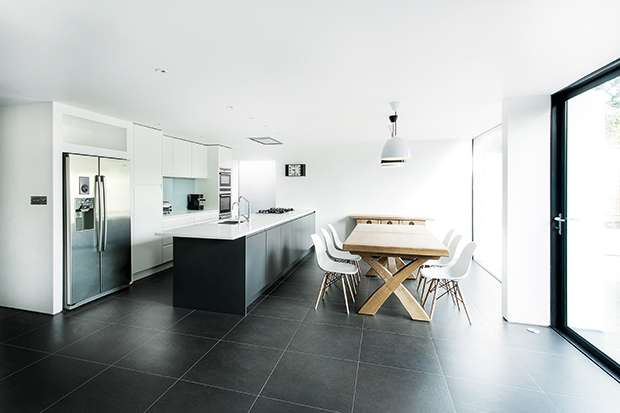 Other than a couple of minor changes, the planners were happy with the design. This was down to the front elevation staying largely the same, and also by hiring Andy, they were using an architect who had a proven record for good design in the area.

On site, work involved virtually gutting the old property, excavating concrete foundations for the kitchen extension and erecting a steel frame. This was built off-site and craned into place to support the nine-metre span. The walls were then constructed from super-insulated blockwork with oversized insulated cavities — ensuring a highly thermally efficient envelope.

The first floor extension has been fabricated using a lightweight timber frame to eliminate the need for unsightly structural columns beneath. It includes 250mm of insulation and a single-ply warm roof. 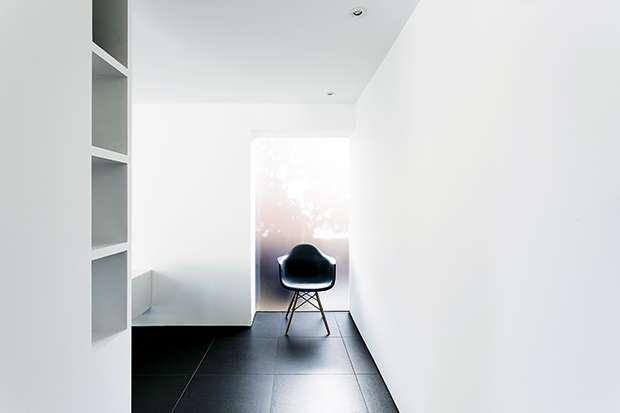 Privacy glass has been used on the side elevations, which face neighbouring houses, to let in light

The process was fairly straightforward, but somewhat hindered by the awful weather throughout 2012. With Alex taking on much of the project management, he also tacked a fair bit of the DIY which helped them come in on budget. Amongst other tasks, he cleared the site, helped dig the foundations, did some of the carpentry, and also installed ceiling speakers for the home cinema system.

The couple, and their baby daughter Matilda, lived with Sophie’s mum in Southampton for the duration of the build. After just under a year, they were able to move in to their light-filled, family-orientated home.