An ambitious design scheme and a whole heap of DIY have helped Trevor and Sandra Collins transform a run-of-the-mill bungalow into a Modernist-inspired home — almost doubling its value.

From the street Trevor and Sandra’s home looks like an attractive remodelled bungalow, but it’s the rear which has seen the greatest transformation, with its impressive and sizeable two storey contemporary addition.

When the couple bought their three-bed detached 1970s bungalow in August 2008, it hadn’t been updated since it was built. But it was the perfect refurbishment project for the couple, who’d been looking for their first family home to share with Sandra’s daughters, Danielle and Anna.

Trevor, who owns his own kitchen and bathroom company, has always had an interest in design and architecture, and particularly likes the Modernist era. “Trevor wasn’t keen on the mock Tudor houses around here as the bay windows and structure wouldn’t have worked for our ideas,” says Sandra. “The bungalow was ideal, though, as it had flat windows and square rooms.” 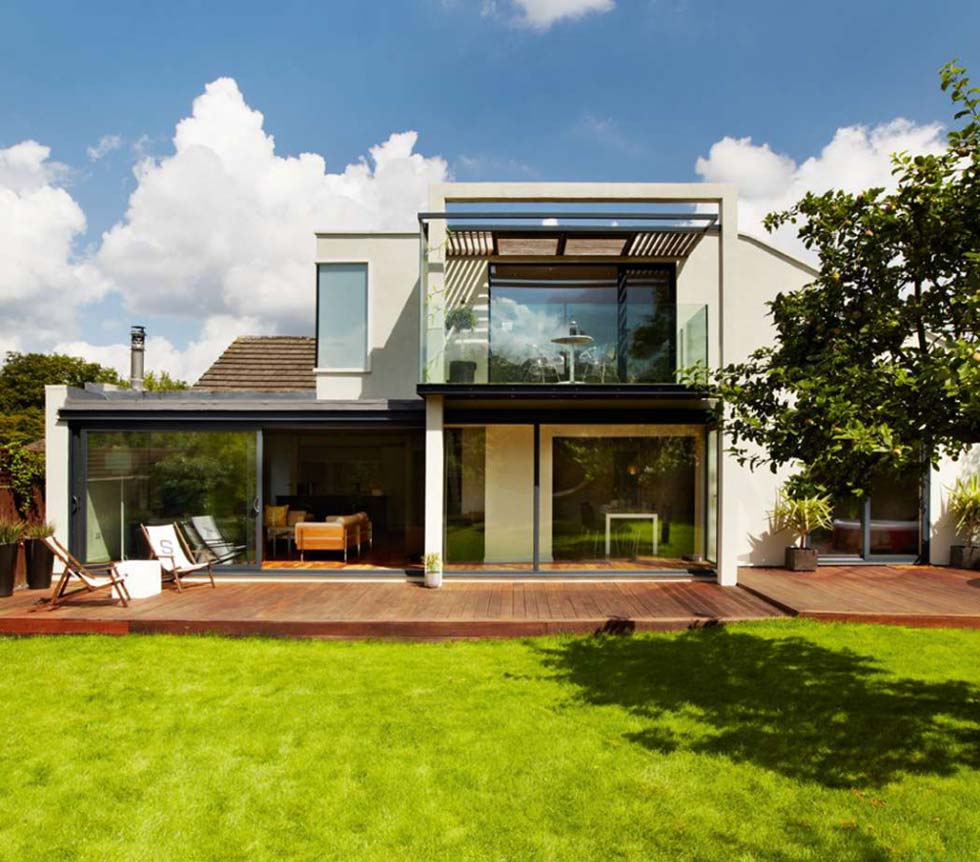 “We wanted a rear extension for a bigger kitchen/living area but we also hoped we might be able to create a guest room and office in the loft,” says Sandra. “But we were totally inexperienced so we really didn’t know what was possible until we spoke to an architect.”

It was the couple’s love of Modernist design that led them to architect Matt Maisuria. They’d been admiring the Modernist extension on his period property close to where they lived and discovered through friends he was an architect. 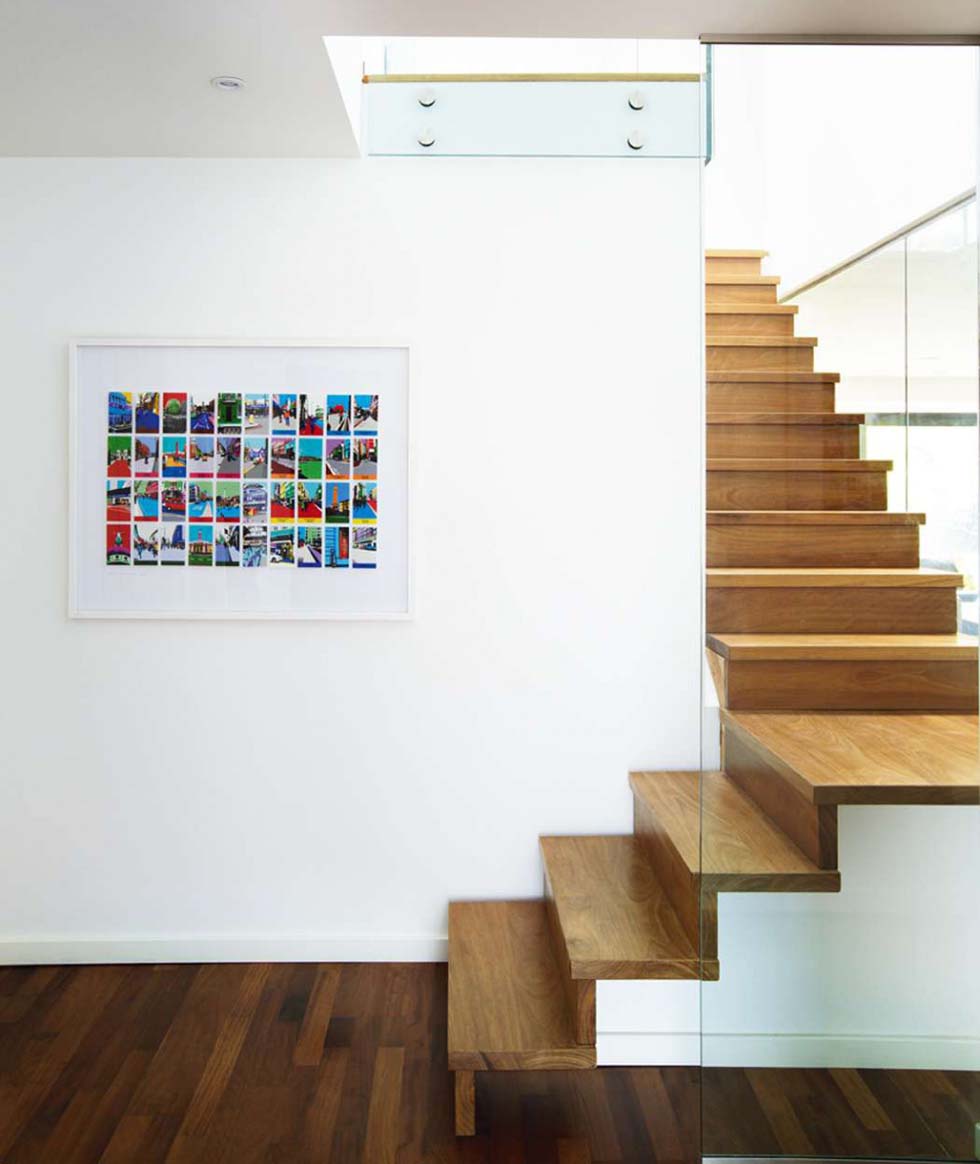 “Matt did an excellent range of freehand sketches showing different types of Modernist design,” reflects Trevor. “But what really won us over was his concept of the balcony with the goal post frame at the back of the house.”

The couple spent the next few months refining the design until they got an affordable and achievable plan. Sandra, in particular, was adamant the project had to be within budget as they only had £100,000 to spend on the design and build of the rear and roof extension shells, and glazing. “Trevor was going to do all the plumbing, electrics, carpentry and decoration in his spare time as and when we’d saved enough money,” she adds. 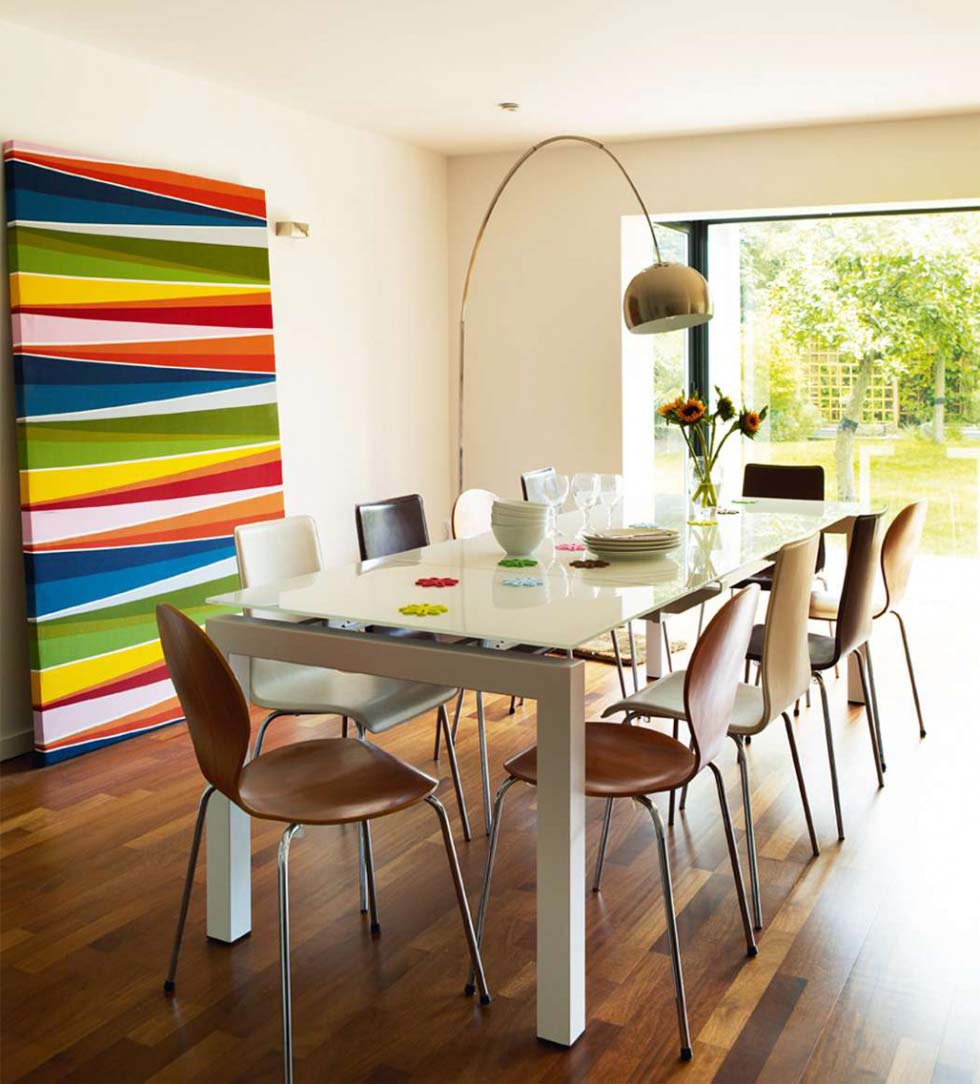 During the design process, Matt concluded that the centre of the roof could be raised by 300mm to allow for two rooms and an en suite upstairs without changing the appearance of the house from the street. Although the couple’s original planning application was refused, following a successful planning appeal building work was able to get underway in September 2009.

The couple estimate that they saved about £70,000 in labour costs, bringing the total of the whole project down to £165,000. “We absolutely love the open plan kitchen lounge, particularly on a nice day when you can sit on the deck and still have a connection to the kitchen,” says Sandra. “But Trevor’s always wanted to build a house so, although we created this house to live in for ever, we’ve decided to sell up so we can fulfil our dream.”