Although he is an architect, Stephen is a somewhat accidental self builder. He had not been looking for a plot, or even to build a home when a piece of land came up for sale next door to a relative. Furthermore, the design which he eventually built was sketched out one night in a pub.

Even though his route seems to have lacked intention, the home he has built is a stunning example of residential architecture. Well thought out interiors make for a home which feels impressively spacious and light when you consider its tiny footprint.

The sloping brownfield site sits at the end of a street of 1930s houses in East Dulwich, London. Measuring just 17.1 x 11.5 meters, the plot was formed when part of a garden was combined with three ex-local authority garages.

Stephen found out about the land as it is next door to his aunt’s house, so when it came up for auction in 2008 he bought it — despite having no previous plans to build a home. 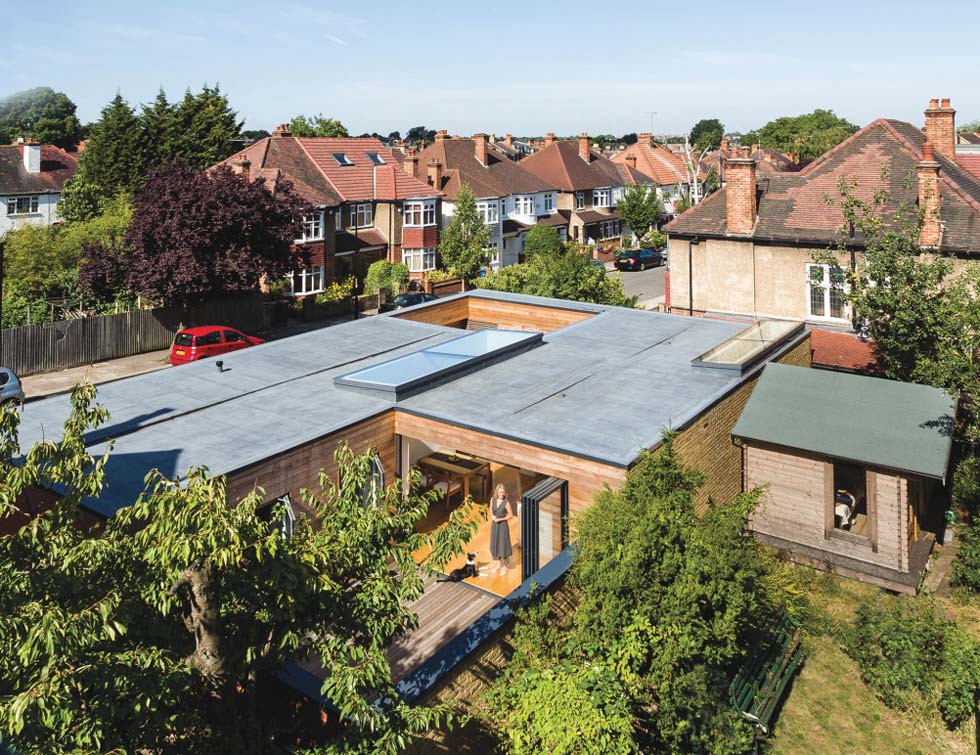 The house is designed to maximise every inch of space on the tight urban plot, and blend into the street scene

The land had previously belonged to developer architects who failed to achieve planning permission for a variety of larger schemes. With a tarnished past with regards to planning, Stephen should have been set for a battle, but his modest single storey dwelling was fortunately approved by the planning department. 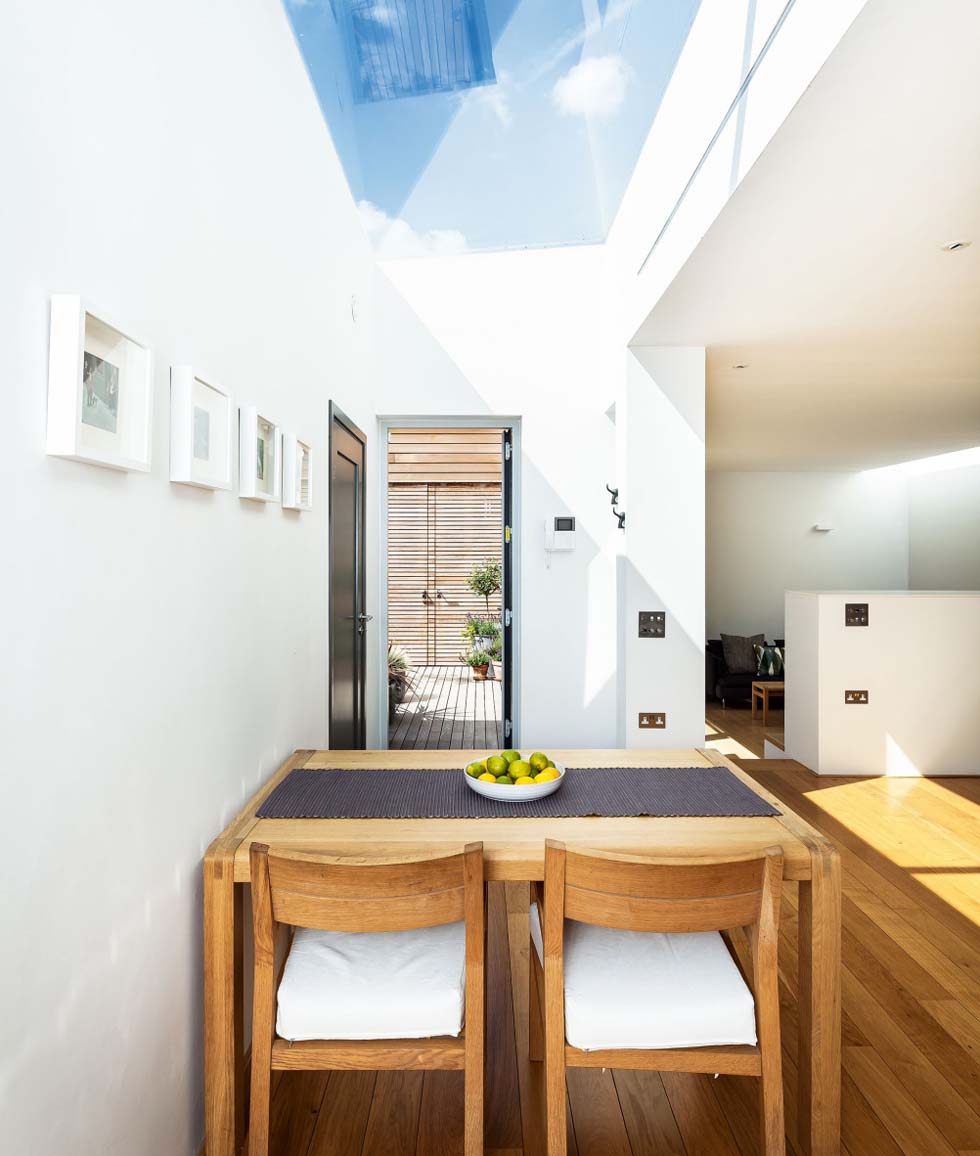 Large rooflights fill the living spaces with natural light, omitting the need for artificial light during the day

Stephen is a partner at architectural practice, Designcubed. Having designed homes for many people, he surprisingly describes himself as the worst client he has ever had. He attributes this to the difficulty he faced bridging the gap between aspiration and budget.

The tight plot also posed problems, and Stephen wanted a design which would make use of every inch of the plot. So, he went for a courtyard concept, building the exterior walls out to the perimeter, with courtyard areas in the two corners diagonally opposite one another. These outside spaces allow more light into all of the rooms, whilst maintaining a sense of seclusion.

The exterior itself is brick to echo the materials used in neighbouring houses, but the walls which are not street facing are clad in a mellow western red cedar. This is also used for the courtyard decking.

There are a few opaque privacy windows facing out, then two large rooflights draw light directly into the open plan living space. Stephen chose to create a step down from kitchen/diner to living room to create a flow, but also a sense of separation. The house has three bedrooms, but one is currently used as an office. 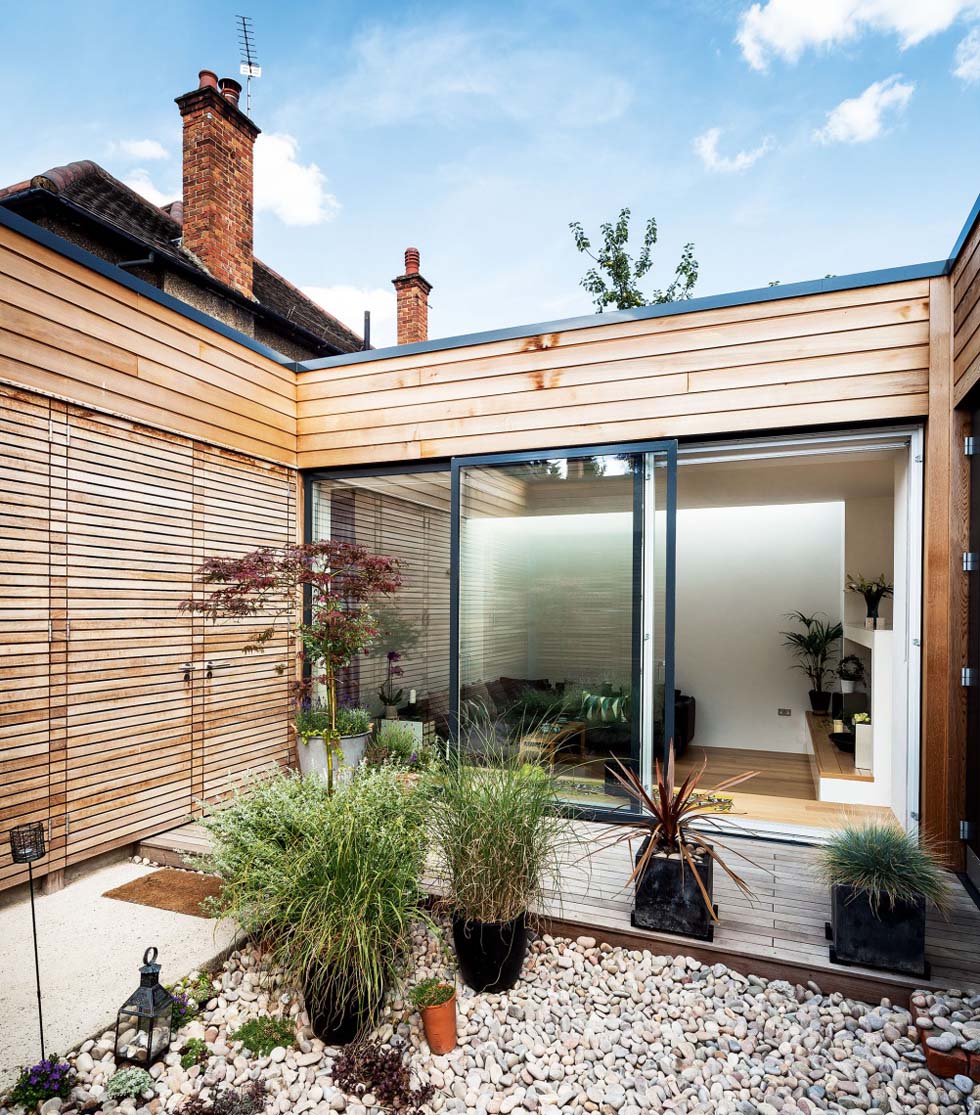 Rooflights, from Glazing Vision, and folding sliding doors introduce natural light into the heart of the floorplan

Work began on site in 2011. The project was put out for tender but many of the quotes were much higher than expected. Unfortunately, Stephen chose the one which was considerably cheaper and just three months into the build, the builder got into financial difficulties and left at short notice. This left Stephen to manage the rest of the project himself.

The home is partially cut into the slope to maintain a level access and a low profile from the street. After the excavation work took place the block construction went up and the beam and block floors were finished with rigid insulation topped with screed. This was then covered with a mix of porcelain tiles and solid oak flooring.

To aid the low profile the home has a flat roof made out of liquid plastic membrane and rigid insulation on a plywood deck supported by a web of composite engineered joists.

Stephen moved in with his wife Cecilia in May 2012. Work was not completed, but they prioritised key tasks, leaving others till funds had been replenished. 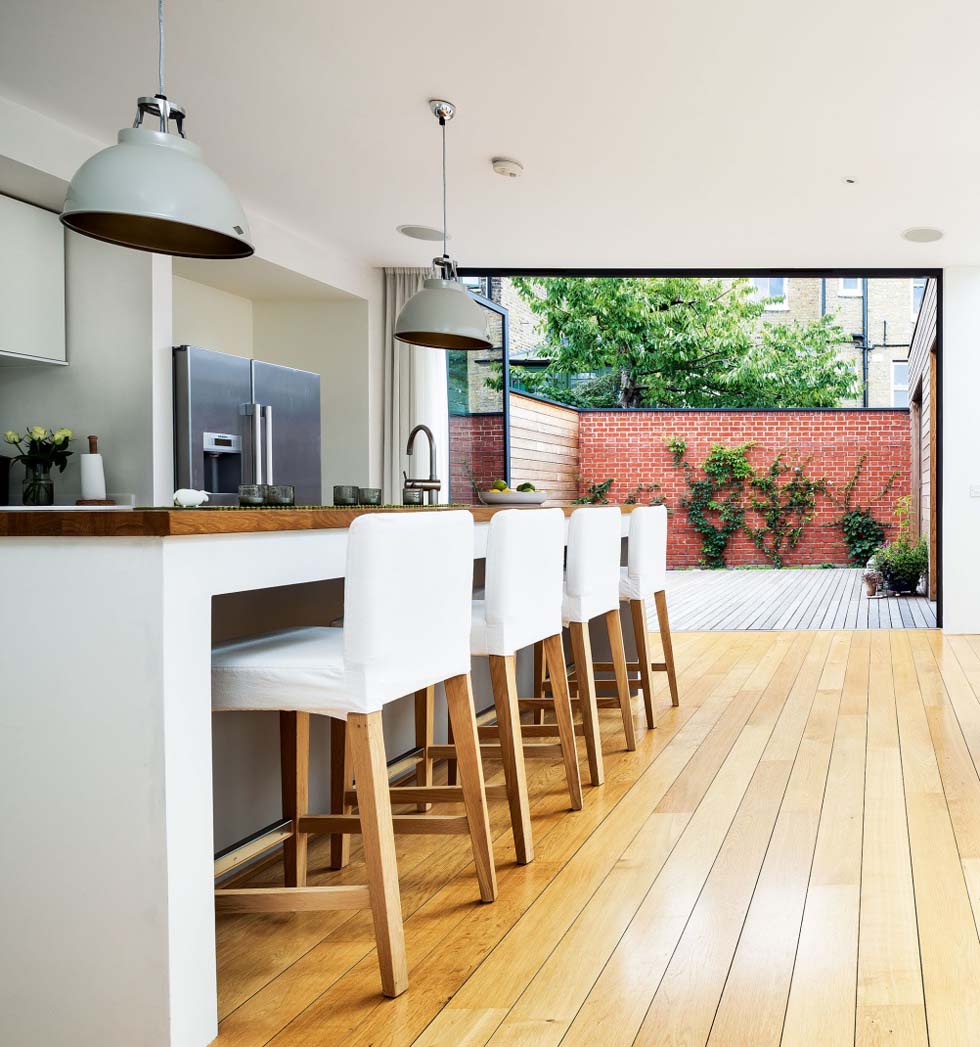 A large island stands between the food preparation areas and the dining table, and is topped by an oak worktop – with two low-hung pendants, the Titan Size 3 Pendants from Original BTC, above – which compliments the oak flooring from Juncker

Stephen had a big task building a contemporary house on a budget as restricted as the site itself. When the first builder left, this may have been a blessing in disguise, allowing Stephen to take greater control of the budget by sourcing the materials himself.

He negotiated deals with suppliers and found some of their furniture on eBay. The sleek and high-end looking kitchen and wardrobes are in fact from Ikea, and have been customised and adapted for a more bespoke look.

This allowed them to invest in high quality internal doors from a factory in the Swedish town where Cecilia grew up. They also imported the windows and some of the flooring from Denmark. 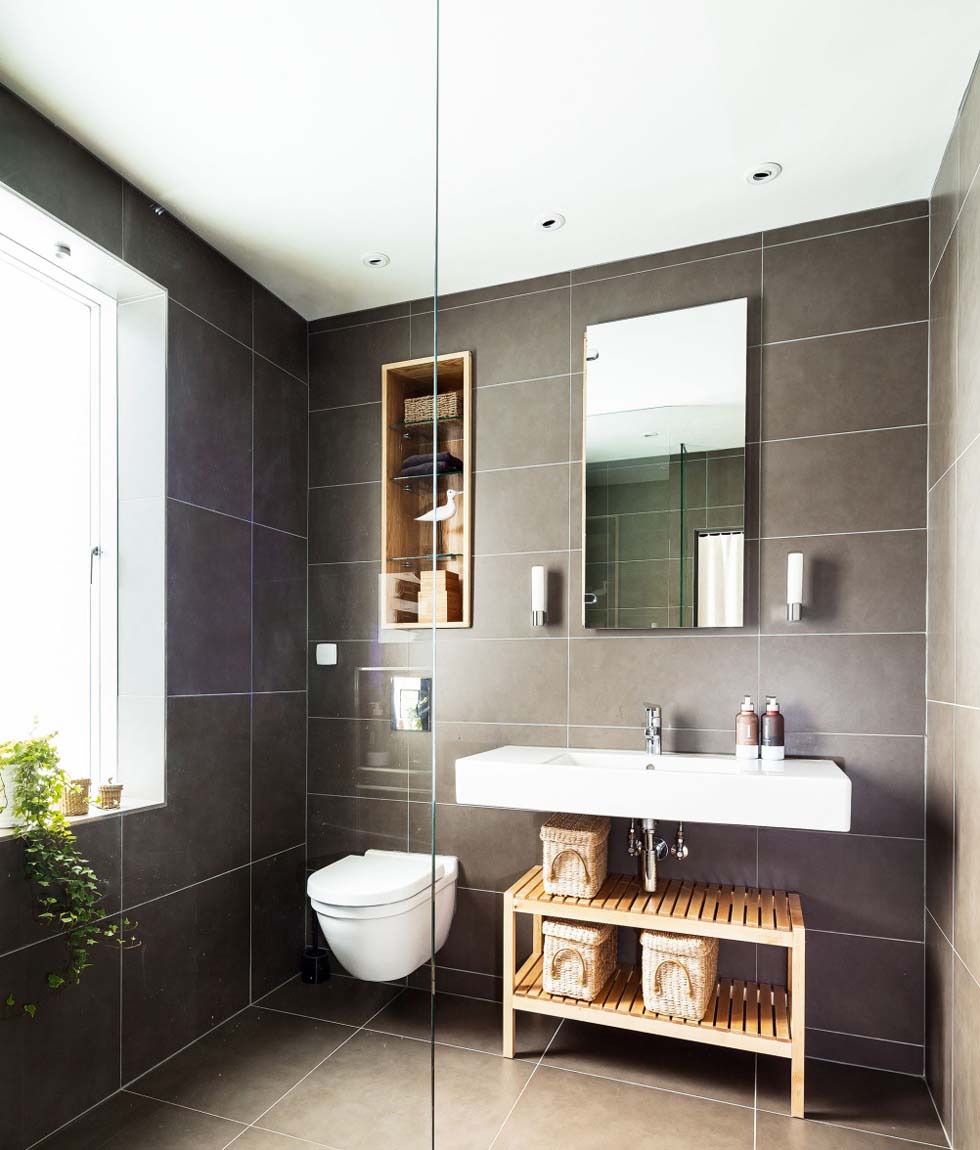 The master en suite features a frameless shower panel, which creates an illusion of space (there’s no space-wasting shower enclosure here). This room also features an opaque window which allows daylight in, but ensures privacy

Space heating and hot water are provided by an air-source heat pump located in the entrance courtyard, and the infrastructure is in place to later connect solar thermal (hot water) panels and photovoltaics when funds allow.

Large rooflights and extensive glazing also mean that artificial lighting is never needed during daylight hours in the main light filled living spaces. This clever use of glazing that has created the open and bright atmosphere in the home.

To them, Stephen and Cecilia’s home is a peaceful retreat away from the city — once inside, you really do feel like you could be anywhere.