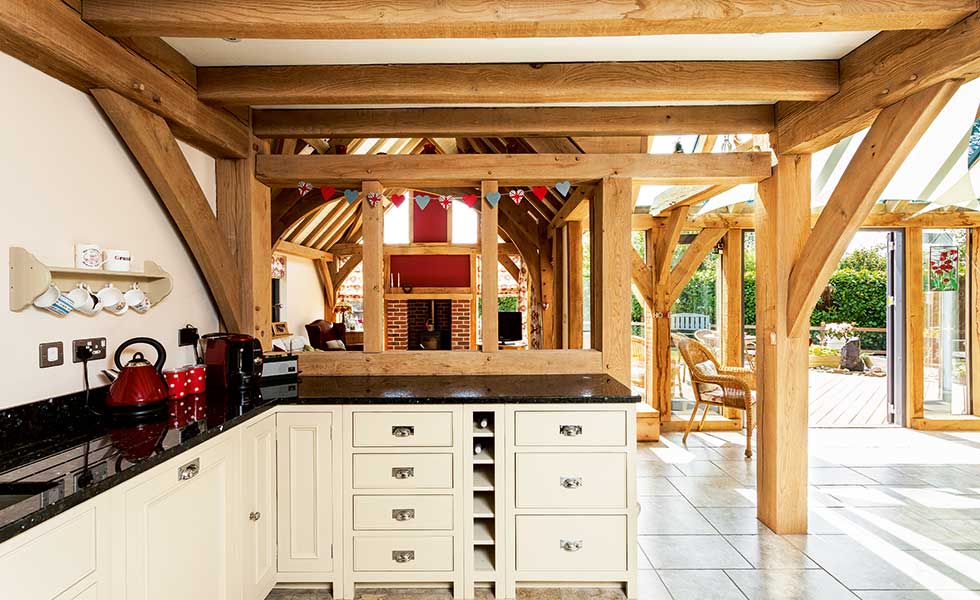 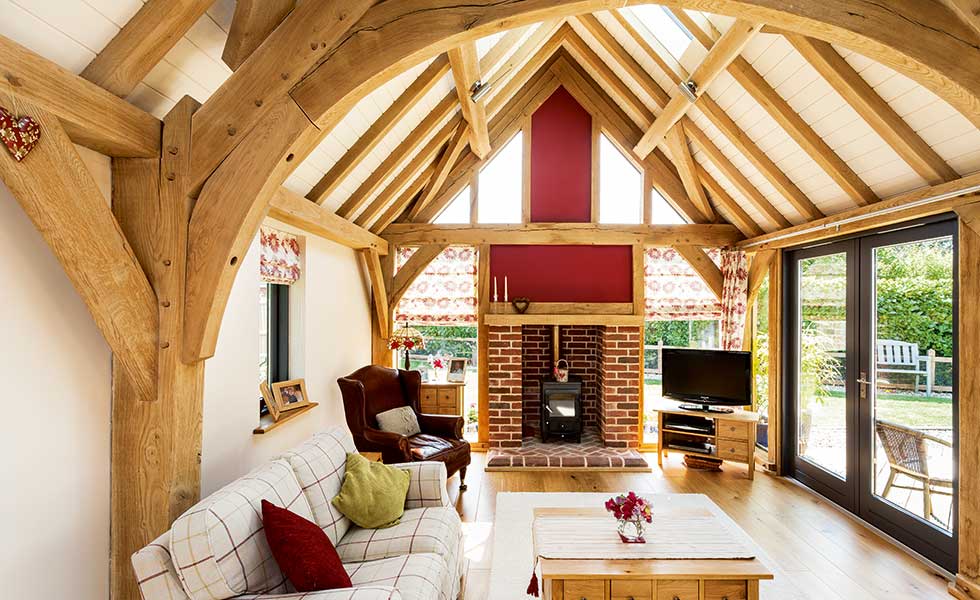 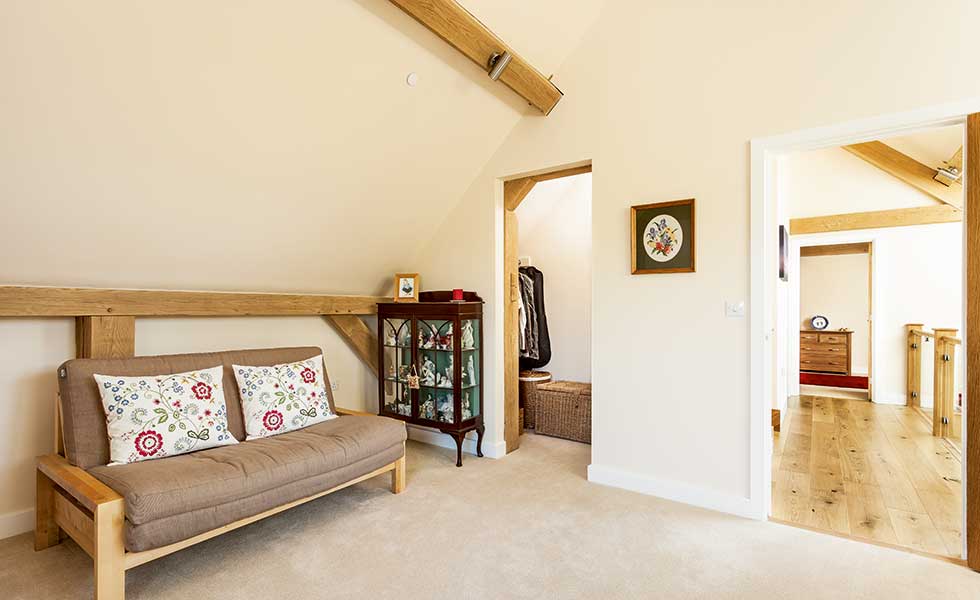 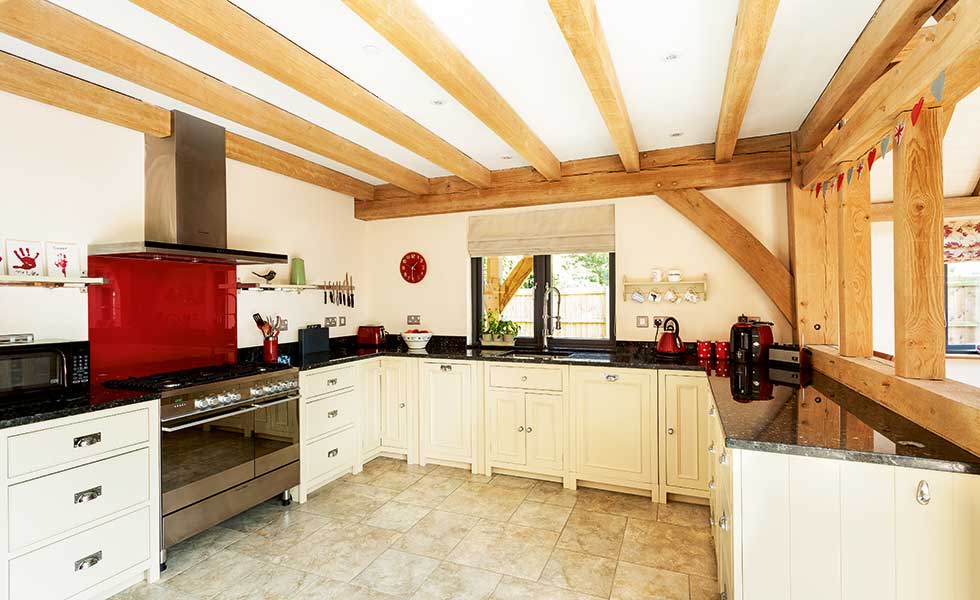 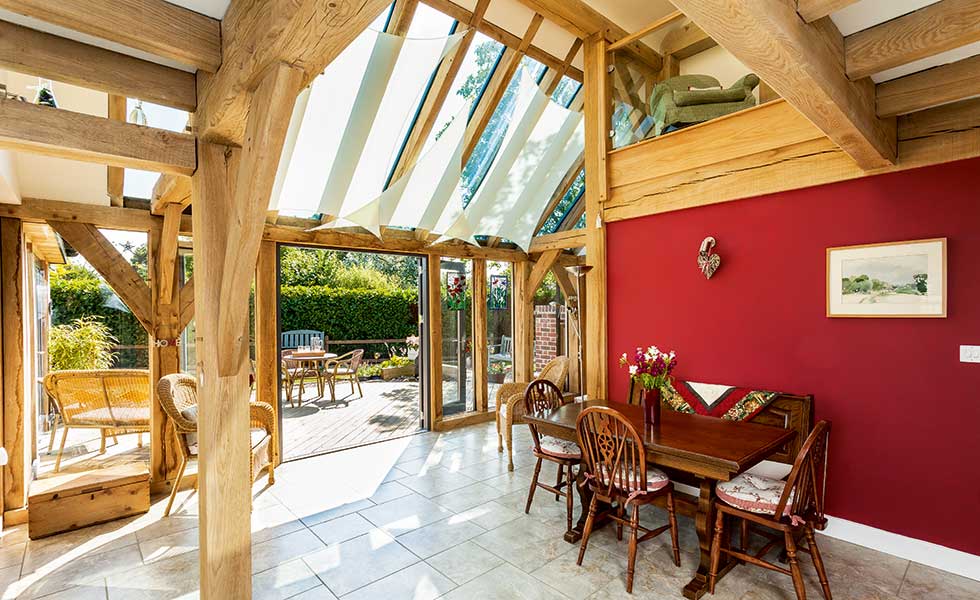 Having been married to a carpenter for 36 years, it was hardly surprising that widow Sue Crowe decided on a self-build design that featured a lot of timber. After deciding to downsize, and failing to find a suitable period property in the area, she opted for self-build.

A visit to the Homebuilding and Renovating Show at the NEC in Birmingham, a few influential magazine articles, and a visit to the Devon base of Roderick James Architects and associate company Carpenter Oak Ltd. convinced her that a green oak frame was the route to follow for her new home. The result is a beautifully designed three bedroom, contemporary oak frame house, positioned at the end of a cul-de -sac overlooking open fields in a Suffolk village near Felixstowe.

The sitting room, with its beautiful exposed oak frames, opens onto the garden through doors by Rationel 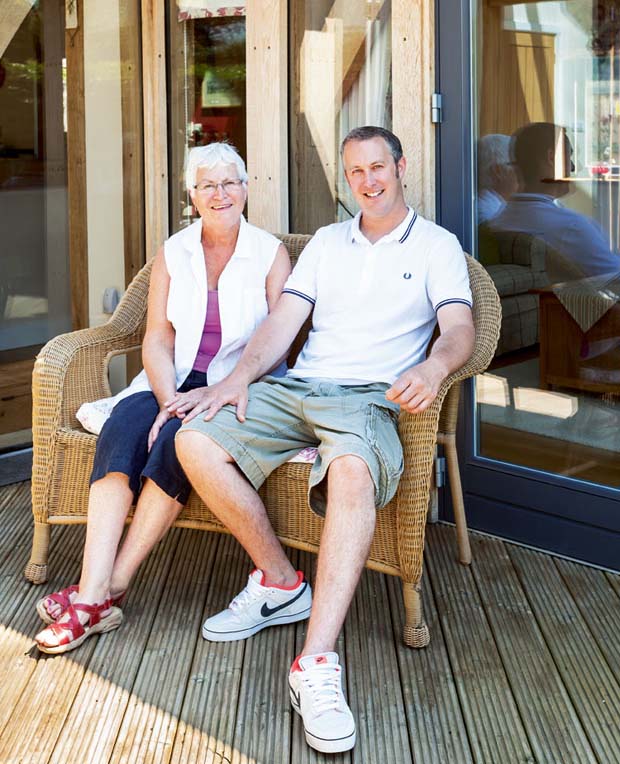 It is perfectly finished, compact, and yet with three good-sized bedrooms, is quite adequate to provide sleepover space for two of her grandchildren, who live just round the corner. Sue’s son, Matthew (who is also a carpenter), aided his mother by taking on the role of main contractor. However Sue worked every day fetching and carrying, skivvying, cleaning up and acting as teamaker-in-chief.

The project had a fairly traumatic start because of local hostility. “The plot was part of the garden of the adjoining house, and the local people did not want anything built here,” Sue explains. “Gaining planning permission presented little problems, but convincing the village people that I intended to live here and play a full part in village life was very hard.”
Now all is finished, peace reigns. “Local people appreciate the quality of the house and all the thought that went into it,” reflects Sue.

The use of structural insulated panels (SIPs) between the glazed areas in the walls and in the roof proved a success because of their speed of erection, remarkable U value, and reasonable cost. However, this construction also gave the slate-clad roof a depth that had to be seamlessly blended into the glazed roof of the garden room beneath. This involved skilful leadwork by roofer Vince Sawyer. It would have been very easy to get it wrong; likewise with the finishing details where the roof glazing meets the fascia.

“We worked on a lot of the vital details as we went along,” Matthew says. “I would chat with our architect Mike Hope in Devon – or when he came over every month to supervise – then he would draw up the details and send it to me so the subbies could work from it.”

“We were hampered by three weeks of snow during the winter of 2010/11 too,” Sue adds. “We also had slight delays with the Velux rooflights and the SIPs.”

The final build cost was £40,000 above Sue’s original budget. She attributes roughly half of this to increasing the specification on many of the materials and fittings. But, the demand from the building inspector for a full internal sprinkler system added £5,500 to the overall cost, and bringing electrical power to the site cost £7,500.

“Matthew had urged me throughout not to skimp on things, and I didn’t,” Sue says. “Fortunately I was able to find the additional money. I think it is an exceptional house, and just what I wanted. But, even after having undertaken a self-build before, I found it hugely stressful and I could not have done it without the assistance of my son. I am sure my late husband Andrew would have loved the end result just as much as I do.”