Of all the house types that line Britain’s streets, the Victorian terrace has to be the most familiar. And perhaps it is this familiarity that has made us so immune to several of its drawbacks: the tight squeeze of the hall corridor, the often lightless back reception room and the tiny scullery that runs behind it.

So, hurrah for Phil Coffey who threw away the rulebook when renovating his two-up, two-down terrace in London’s Highbury. He has created one of the most original and successful reworkings of this awkward interior H&R has ever encountered.

“We wanted what everyone wants — plenty of light, privacy and some greenery,” says Phil, who runs his own architecture practice, Phil Coffey Architects. “In the end, it’s just two party walls and whatever you want to do between them.”

What he and his wife, Tamsyn, did between these walls was pretty much everything they could in order to end up with a simple and quite revolutionary take on the original floorplan of the unexceptional terrace.

All the internal walls were removed on the ground floor and the layout was squared off and extended at the rear, a new, open staircase was installed and the kitchen was brought from the back of the house to where the front parlour would have once been. The level of the back reception room was lowered to bring it down to the old scullery height and make the ceiling significantly higher and more private, while huge glass doors were brought in at the rear leading to a tiny, bamboo-filled courtyard. 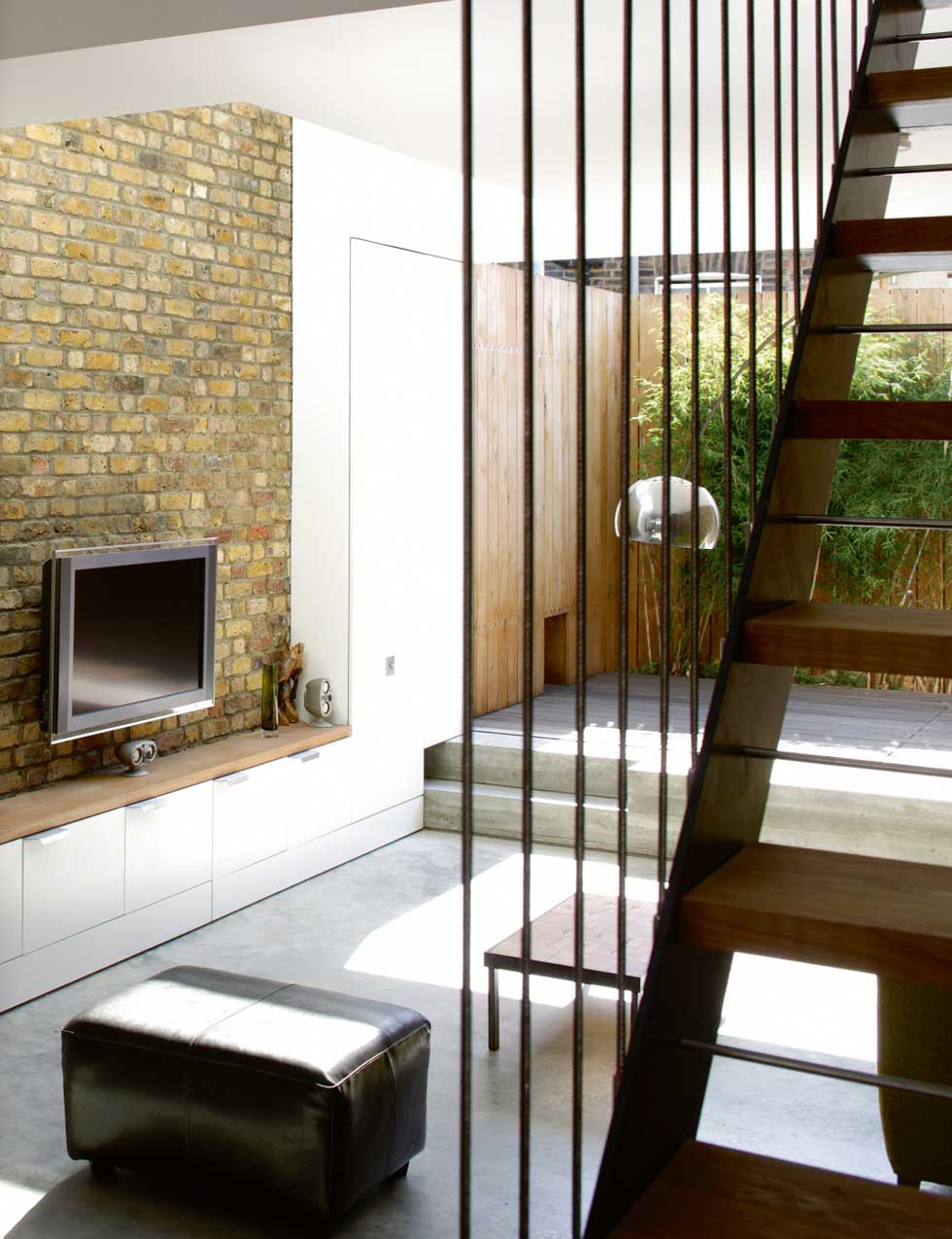 The success of this house is not solely down to the intelligent use of space but also to the brave palette of materials. The walls have been stripped back to bare bricks and concrete is a significant presence. The floor of the main living space is polished concrete and there is a chunk of poured concrete peeping just above the kitchen counter and separating it from the rest of the ground floor and around the walls.

Light pours in through the vast foldaway glass doors onto the terrace and also from the glazed roof over the old side return (Phil has kept the roof flat so that puddles gather on the glass, casting interesting shadows into the room). A sweep of smart but unobtrusive white cabinetry matches the kitchen units and ends at a corner junction with an extraordinarily elegant steel and concrete fireplace notch seemingly carved out of nowhere. 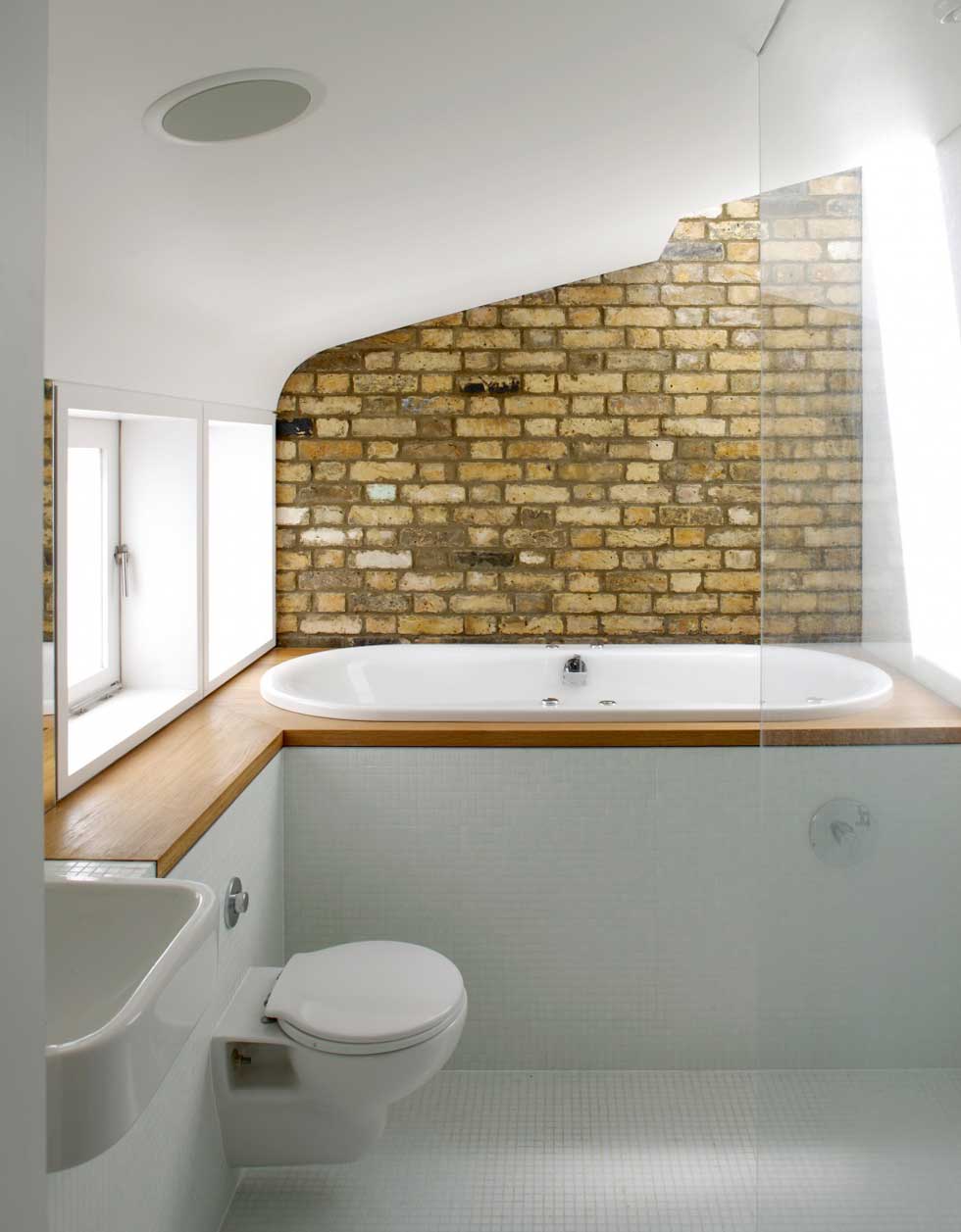 The ground floor alone is a treat but there have also been changes upstairs. Although the first floor remains largely as it was in layout – two bedrooms and a bathroom – great gains have been made in terms of storage. The white cabinetry familiar from downstairs makes a reappearance and even tiny areas are used as storage, such as a dead wall dividing the top of the stairs from the bathroom which has had a cupboard built into it. 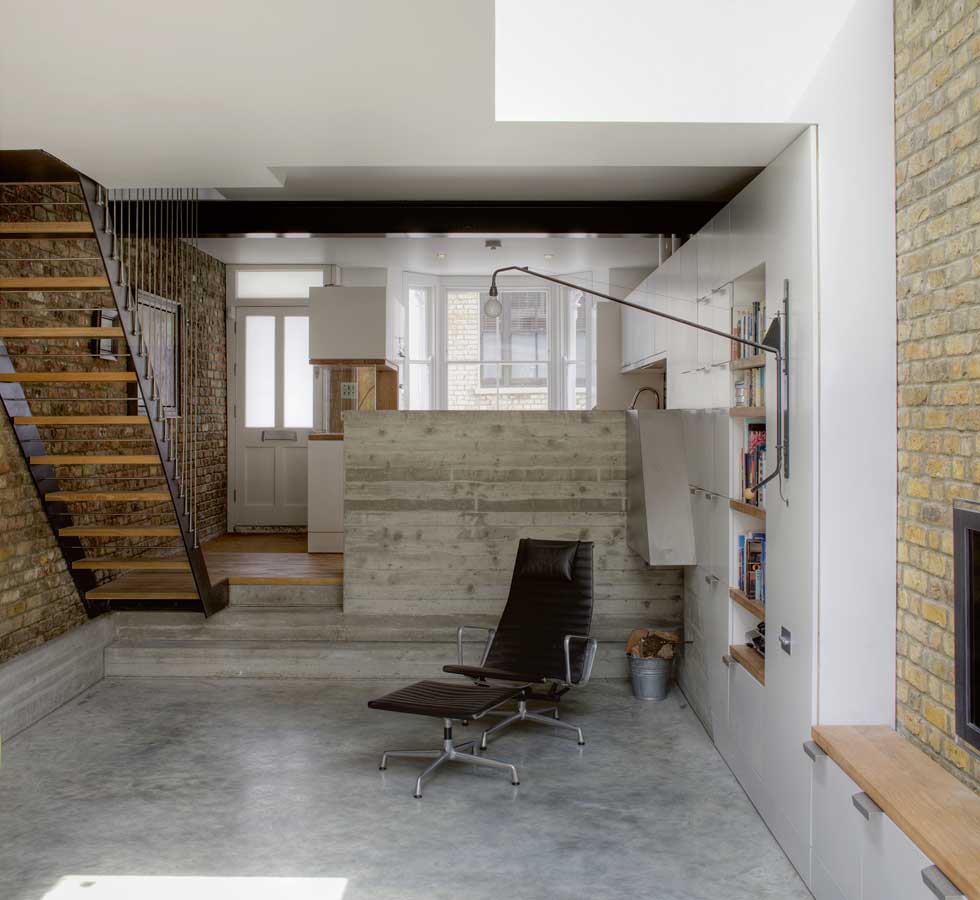 However, it is the loft extension that is the most arresting addition to the whole property. Accessed by a beautifully engineered glass staircase, that brings light back down through the house, it’s so much more than the usual afterthought under the roof. The room combines an office area with a guest bed and (with yet more white cupboards) as well as a discreet utility area.

Light pours in from a glass void in the ceiling and, although conventionally sized, the windows are bifolding and, when open, seem to connect you with the sky, the rooftop view and the inescapable bulk of nearby Emirates Stadium. “I wanted the eye to be drawn out or up at every point, so that you will always see sunlight and height.” Phil explains. “We took a long time building up models to get it right. Maybe it’s because I’m not a genius but, you know, it really doesn’t come easily.” Revolutions rarely do.