At just 27 years old, Rachel and Darren Luke bought a plot of land in the Worcestershire countryside, with a nondescript 1980s house standing on it. Seduced by its idyllic location, historic nature and bags of potential, the Lukes went on to discover just how challenging their project would be.

“We moved here with our two young sons in the hope that it would be our forever home,” explains Rachel. “Not only was this a huge financial undertaking at such a tender age, but we were soon to learn that the property frequently flooded — and in the years that followed this caused substantial subsidence.”

When Rachel and Darren bought the house and surrounding land, extending to seven acres in total, they had not been advised by the previous occupants of the true extent of the flooding issues that plagued the site.

“The ground all around the house flooded the day after we moved in,” says Darren. “The house had little to no insulation or proper foundations and, during a small earthquake that hit the area a few years later, suffered further subsidence issues.”

“The house was dark, cold and miserable,” adds Rachel. “We always had a long-term plan to replace it but we lived in it for 17 years without doing anything; instead we saved and planned for a new house that would alleviate the flood issues.” 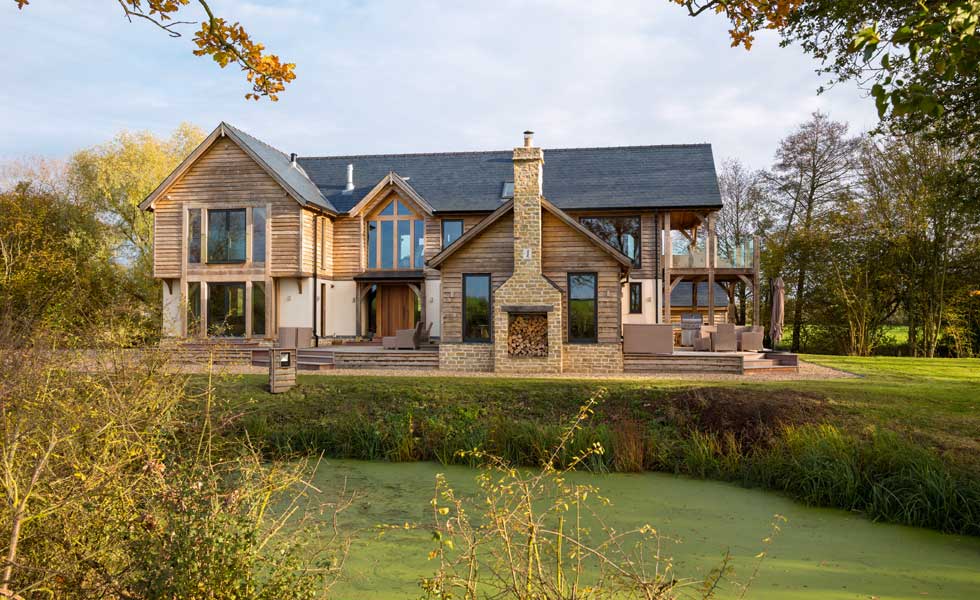 The new oak frame house replaces a brick built 1980s house that, unbeknown to Darren and Rachel had flooding issues. The house has now been raised up one metre above the ground in order to overcome the flooding problems

The house, named The Stews, had been built next to a collection of ponds, listed as ‘Stew ponds’ in the Domesday Book. The land had been inhabited by an order of monks from the Knights Templar, who bred fish for the local community, raised in the stew ponds — Rachel and Darren still have fish in the ponds.

Luckily, planning permission for the new house was passed in a matter of months with the main proviso being that the new dwelling should be no bigger than the original house, that archaeologists would need to be on site at certain stages of the demolition and ground excavations because of the importance of the historical ponds, and that both a flood risk assessment and wildlife report be undertaken. 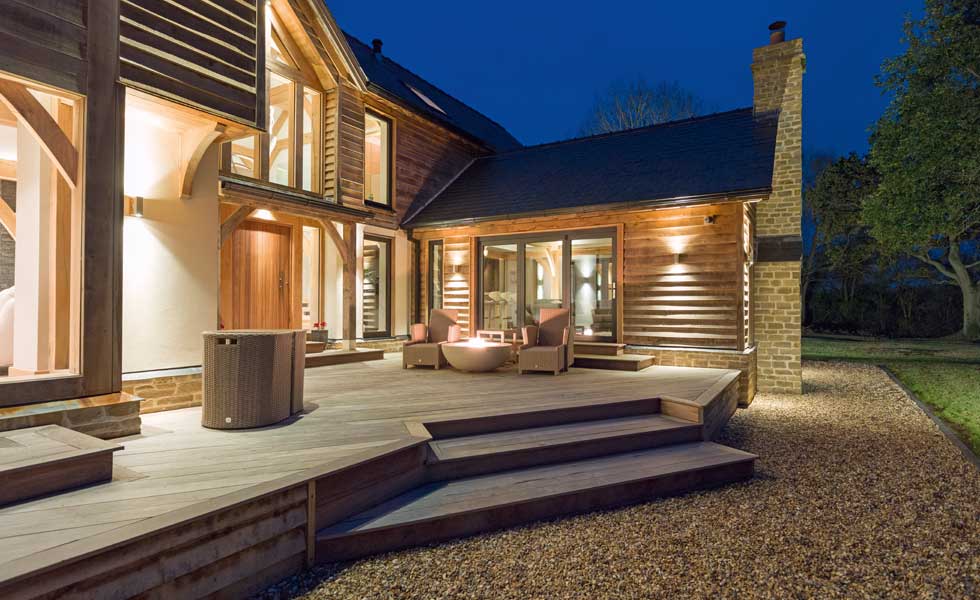 Working with Oakwrights, the new garage and flat provided a spacious living, dining and kitchen space, along with two bedrooms. Hinting at what lay ahead from the main build, the garage had to be built on top of 33 piles. “Once the old floor slab came up, we discovered the remnants of a Victorian cottage, as well as another earlier wall,” says Darren. Once again, the archaeologists were called to oversee the demolition.

Having had so many years to plan their new dream home, Rachel and Darren already had a clear idea of what they wanted. “We had met a couple who live near to here whose timber-framed house we had seen and admired,” explains Rachel. “We spoke to them to get advice, as coincidently their oak frame was also from Oakwrights.”

“The new house is raised one metre above ground level and a total of 81 five-metre piles had to be put in underneath,” says Darren. Overhead power cables were also removed, with new cables being sunk into the ground. 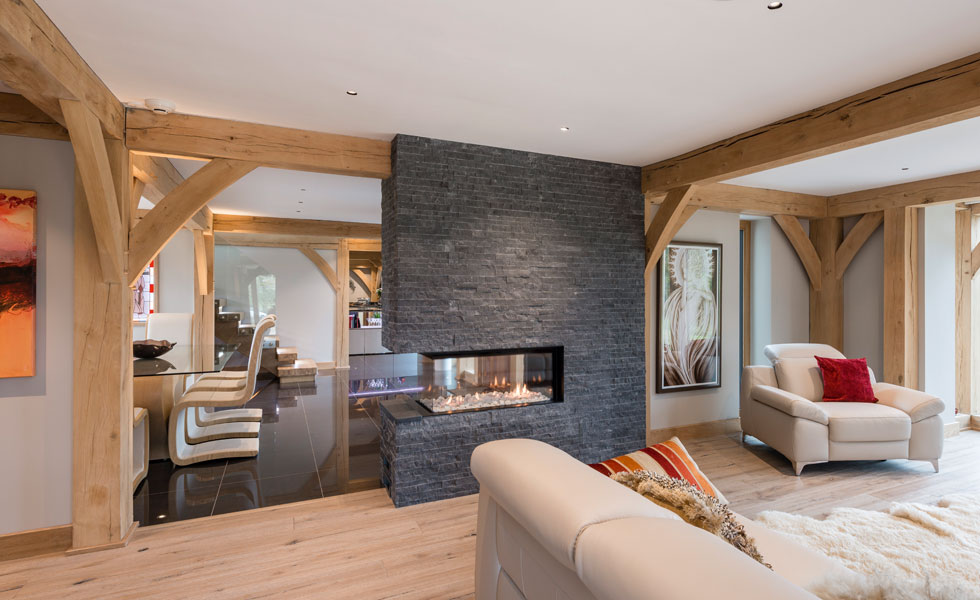 The new house was designed by architectural designer John Williams, taking into account the Luke’s wishes for a modern family home with character. Once Oakwrights arrived on site with the frame, which has been left exposed internally, it took a team of four seven days to construct. Darren and Rachel then employed a small local building firm, Furber Young Developments, to carry out the remaining construction, with Darren project managing the build and taking on much of the additional work on a DIY basis.

“Our builders were amazing,” says Darren. “You just can’t overstate how important the relationship with your trades is. Any problems that arose were dealt with straightaway — nothing was too much trouble and we really felt they were super passionate about achieving the very best end product possible.”

Externally the house has been clad in oak, with sections of render and a stone dwarf wall that extends up into the main chimney stack. The oak frame is concealed externally within the encapsulation, apart from in the glazed gables, where it remains exposed. 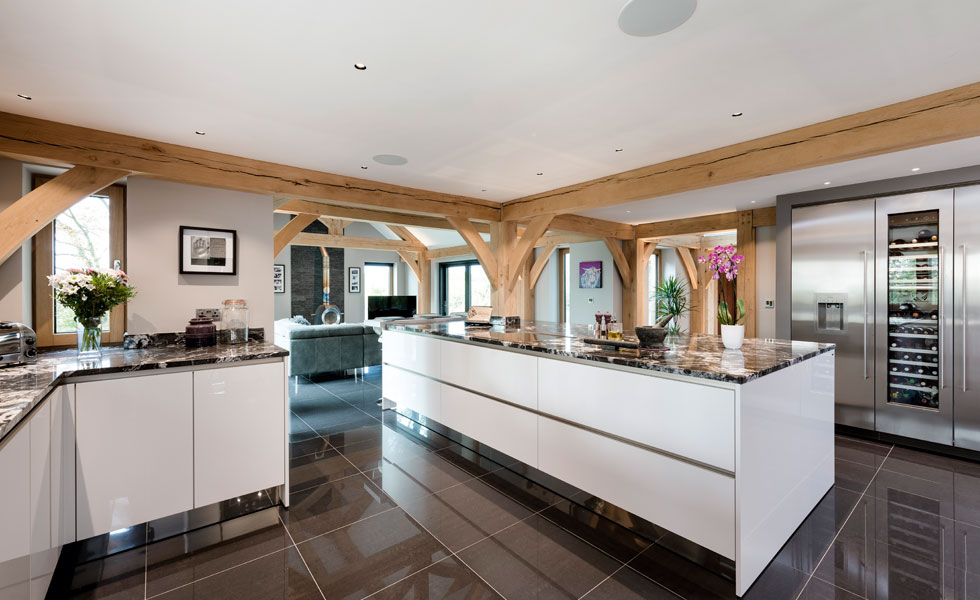 The new contemporary kitchen is full of luxury appliances that are offset by the beauty of the oak frame. The kitchen was sourced from Kitchens by Design

Internally, the house is entered via an oversized pivot door into a large dining hall. From here, doorways lead off into the open plan kitchen living space and a separate living room to the opposite side of the house — while a chunky contemporary staircase made from oak treads and glazed balustrades rises through a double-height space to the landing above.

“The old kitchen was dark and gloomy and very chintzy,” says Rachel. “We never wanted to cook.” The newly built space is quite another story, with built-in appliances of the highest specification and an enormous central island featuring an induction hob and rising extractor.

The kitchen is open through to an informal seating area, featuring a striking woodburning stove set into a chimney breast clad with slate slips — a design feature echoed elsewhere in the house. The ground floor also features a home office, utility room and downstairs WC. 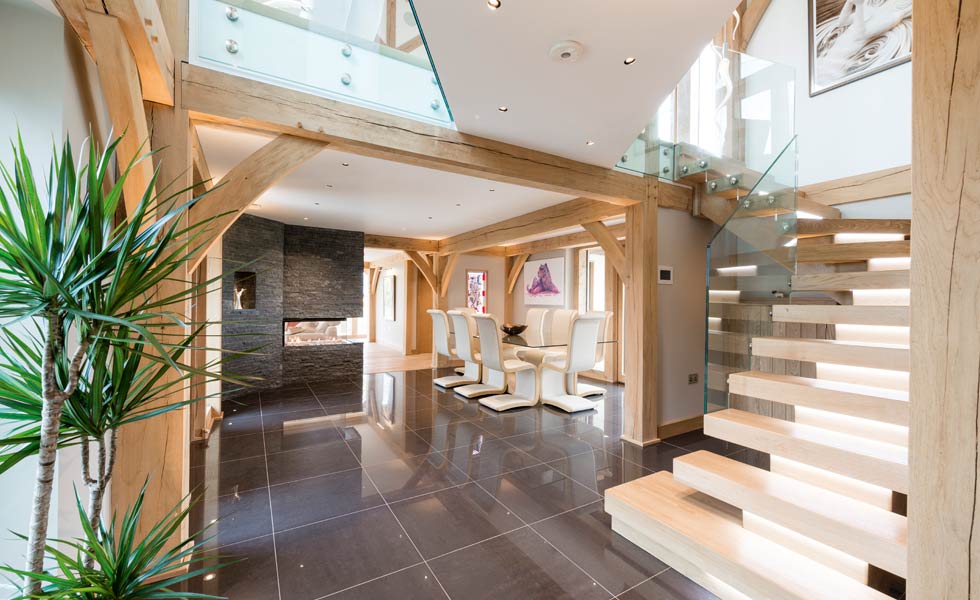 On the first floor, a central landing-come-living- space enjoys double-aspect views through full-height glazing, opening out on one side to a decked balcony. A ‘bridge’ running over the stairwell leads to the master bedroom suite, complete with a walk-in dressing room and luxurious en suite.

The bedroom is full of light, thanks to a large run of bifold doors, opening out to a half-covered balcony affording stunning views out over the open countryside. There is also a huge triangular window, weighing 280kg, that runs at exactly the same angle as the roofline. “We’d rather have three large bedrooms than lots of smaller ones,” says Rachel.

The house is choc full of high-tech features and eco-efficiency measures, including full Lutron home automation incorporating control of lighting throughout the home and garage flat 80 metres away, as well as 12 electric blinds, a full video distribution matrix throughout the house and flat, and a 16-channel remote CCTV surveillance linked into an integrated alarm system. In the event of an incident this triggers every light in the house and all external floodlights, with all LED tapes turning red. 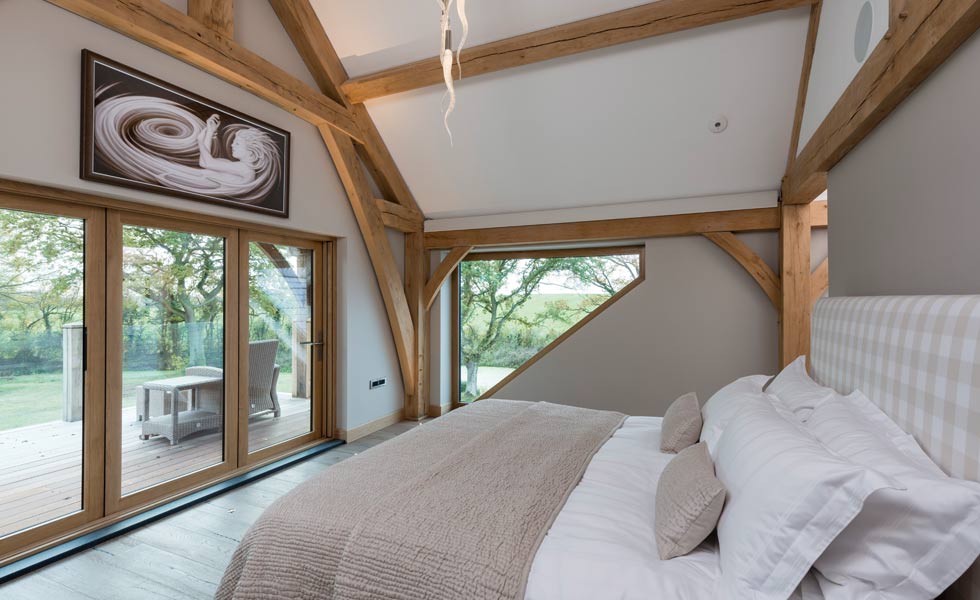 There is also a nine-room linked MusicCast sound system, a number of WiFi boosting access points outside as well as hidden in the ceiling internally (the house’s insulation means the standard WiFi router barely makes it out of the room it’s running in.) Then there are the two mechanical heat recovery ventilation units and a recirculating hot water supply and pump.

“The system senses when you are close to the taps, triggering the hot water so you never have to wait more than seven seconds for it to come through,” explains Darren. The whole automation system can be controlled by a mobile phone remotely from anywhere in the world. Darren reveals the final costs ran to £85,000 for this element of the project. “We also put a lot of effort into the airtightness of the house,” he says. “At 0.9 air changes per hour, we’re almost at the Passivhaus standard of 0.6.” 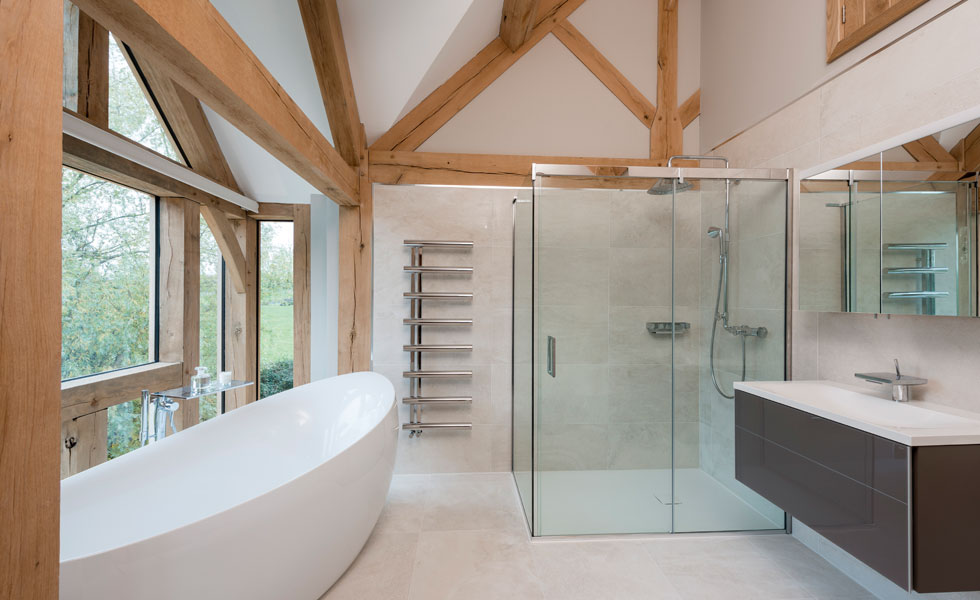 And is their home all they hoped it would be? “There is nothing we would change — this house has exceeded all our expectations,” says Darren. “Because it is our home for the rest of our lives, the spec inevitably went up, and with it the budget — it became a bit of a monster!”

Rachel and Darren admit that at times the build was stressful and that they could never have anticipated the amount of mud and mess they would have to endure on site due to bad weather, the huge amount of excavation, or the delivery of 2,000 tonnes of stone for the house and sinking driveway.

“We did wonder if it would ever be tidy again,” says Rachel. “But you can’t make an omelette without breaking a few eggs and it has been so worth it. I wake up and have to pinch myself — I can’t believe the house is ours! We are so very proud of our achievement.” 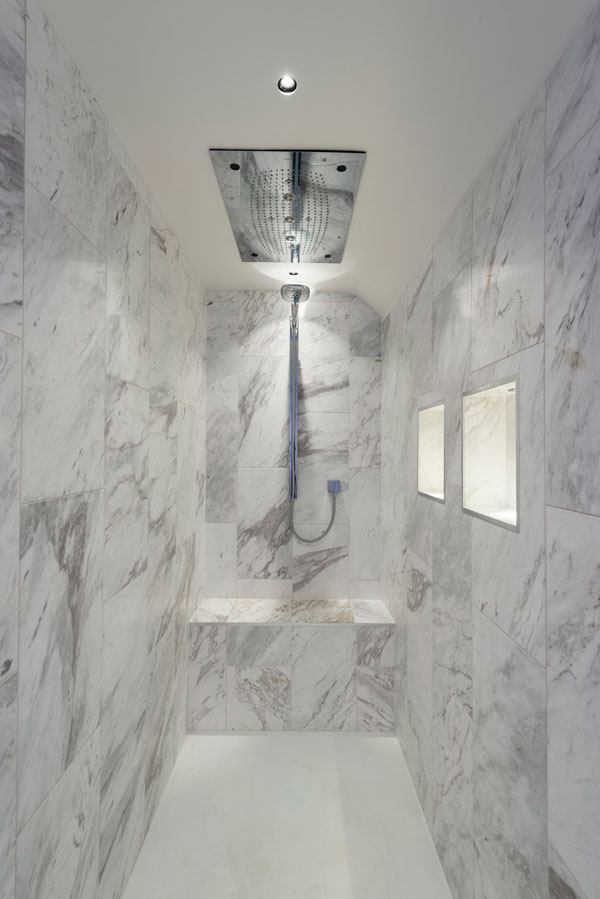