Passivhaus: How to Build an Airtight Structure | Homebuilding & Renovating Skip to content

If you’ve been following this series, you’ll know by now that the key features of a Passivhaus are:

We are now well on with the construction of our new showhome: the foundations, ground floor and building superstructure are all complete, and we have installed the windows and doors (more on which later). All of our construction details have been prepared and considered in depth and we are about to demonstrate in public – at one of our Self Build Live events – the level of airtightness we have managed to achieve.

The Passivhaus standard requires very low air leakage rates which must be demonstrated by means of an airtightness test, carried out using a ‘blower door’. The air change rate must be less than or equal to 0.60ac/h (air changes per hour), under test conditions, to meet Passivhaus levels.

It is worth noting that in practice an airtightness level of 0.60ac/h is roughly equivalent to having a hole in the envelope area of the building less than the size of a five-pence piece for every 5m2 of building envelope. In comparison, a building that merely achieves the limiting figure for airtightness to comply with the current version of Part L of the Building Regulations will have an equivalent hole the size of a 20-pence piece for every 1m2 of envelope. 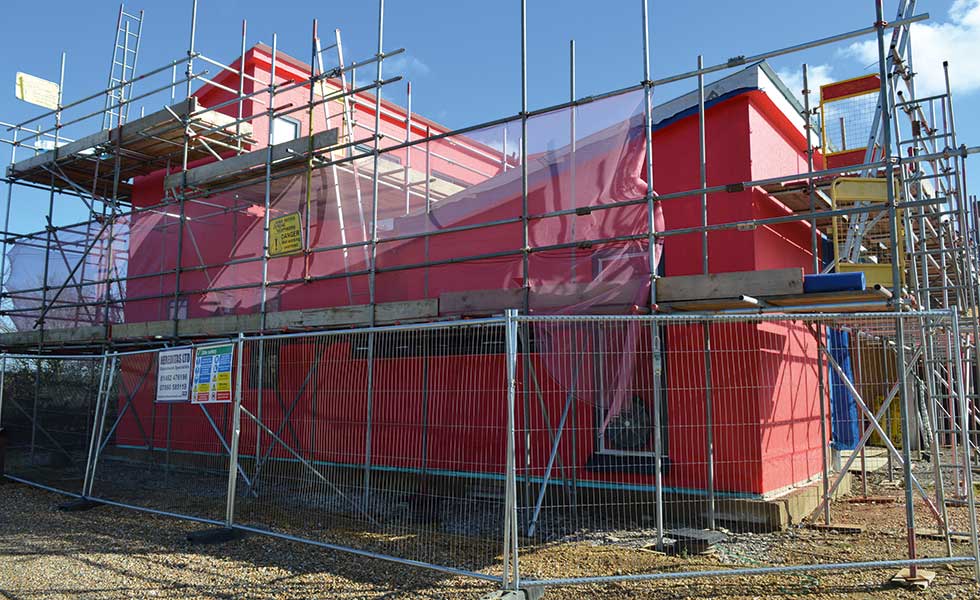 Defying perceptions of Passivhaus buildings being box-like in form, Potton’s latest showhome (designed by HTA Design) will cut a dynamic shape when finished in summer 2016. The structure has been created using the Kingspan TEK® Building System, which was pre-fitted with a Wraptite System membrane in the factory prior to erection. The walls will be clad externally in brick, and the roof finished in Vieo standing seam by Euroclad

How is Airtightness Measured

In typical fashion, the methodology for testing airtightness for Passivhaus buildings differs from that used in UK Building Regulations — although they do both use a ‘blower door’ to carry out the actual physical test. The Passivhaus standard measures the air changes per hour at a pressure of 50 pascals or @50Pa (the n50 measurement).

In other words, this is the number of times the volume of air within the building is changed in an hour under test conditions; it’s a volumetric measure. The standard is a measure of air infiltration, and hence the heating energy cost of the building. It considers the volume of air that needs to be heated and excludes internal walls and floors.

While clearly technically incorrect, it is often convenient to consider the air change rate and air permeability for dwellings as roughly similar and, in this case, it will help me with the next explanation.

Our showhome is the first Passivhaus that we have constructed and we are learning all the time. However, we have constructed a very large number of homes that can reasonably be considered as low energy and have needed to be particularly airtight. For a great number of these we have had the responsibility of delivering the airtight envelope of the home at an early stage of the construction.

We know from our experience that, using the Kingspan TEK® Building System, and by carefully sealing and taping external wall junctions we can readily – I hesitate to use the word easily – achieve airtightness figures of between 1.5-3.0m3/hr/m2@50Pa. We know also that figures of 1.0-1.5m3/hr/m2@50Pa require considerable care and engagement from the whole construction team. We have some experience of properties where the requirement is 1.0m3/hr/m2@50Pa and know that this is hard to achieve, but equally far from impossible.

So, what about our showhome? Our first test yielded a result of 0.76ac/h — irritatingly short of our Passivhaus requirement of 0.60ac/h, but perhaps better than one might reasonably expect straight out of the box. We spent a short period of time with smoke sticks and ‘the skin on the backs of our hands’ test finding some of the more obvious leakage points, including some schoolboy errors, and addressing them. We then carried out a second test which gave us a result of precisely 0.60ac/h.

Finally, we carried out a smoke test, which involved filling the entire house with ‘smoke’ from a machine – similar to the type of thing that one might expect to find in a nightclub – and then gently pressurising the house using the ‘blower door’. This test, while not perfect, can help reveal leaks in the building envelope that had previously remained undetected as the smoke finds its way out of the structure. The smoke test was helpful and identified a number of leakage points, mostly higher up, where some attention was required. By the time you read this we will have conducted our first test in public and we will know how much we have managed to improve upon our target of 0.60ac/h.

Ventilating and Heating a Passivhaus

There is always a temptation when designing and constructing a very high-performance property such as a Passivhaus, to fill it full of the latest high-tech, complex technologies and this is particularly so when looking at the systems that heat and service our homes. From day one we were determined to resist this temptation and to construct a home that is both energy efficient (concentrating efforts on the building envelope), but also very simple to live in.

I think there is a real danger that the population at large receive a message that Passivhaus buildings are complicated to live in — this should simply not be the case.

So, having constructed a particularly airtight building envelope one must next consider how to adequately ventilate the building and ensure that the air inside is of good quality. Because the envelope is so wonderfully airtight, naturally ventilating the property, as is currently the case in most UK properties, is not an option and a mechanical ventilation with heat recovery (MVHR) system is required. Time and experience have shown that correctly designed, commissioned and installed systems will not only recover the required amount of heat energy from the air in the property, but will also provide air of good quality.

Heat recovery is an important part of the Passive House Planning Package (PHPP) model. In practice, this means that the MVHR system needs to be high performance and it makes real sense to use components certified by the Passivhaus Institute. At early stages of the design process we did look at using more typical MVHR systems, but the performance penalties were simply not worth it. We have leant heavily on the expertise of our partners at Total Home Environment for the ventilation, heating and hot water strategy, and have ultimately decided to install a Genvex MVHR unit with in-line electric heater elements to warm the incoming air.

The location of the ductwork routes were considered and designed at an early stage. We have also added small elements of electric underfloor heating to the bathroom areas and immediately in front of our large 8m-wide glazed opening. Hot water is provided using a micro air-source heat pump that is ducted to outside the property.

In writing this now our selected solution sounds simple but, in reality, we considered lots of alternative systems. I’m very happy with where we’ve ended up and believe that we have a solution appropriate to the home we are constructing. We rejected combined ventilation heating and hot water units because we couldn’t readily obtain one with a capacity suitable for the size of the property. While running short of hot water is never likely to be an issue in a showhome, it isn’t sensible to construct something that wouldn’t work in practice or would be difficult to procure.

Before settling on our solution we also looked at using a gas boiler with radiators and then with underfloor heating. We rejected radiators because, while the system would have been simple, it’s a fact of life that most self-builders don’t like them and won’t have them in their own homes. A full wet underfloor heating system was rejected (although some may want it as a backup) as I just couldn’t get my head around the idea of installing a whole system to meet what is, in reality, a very small demand for heat. 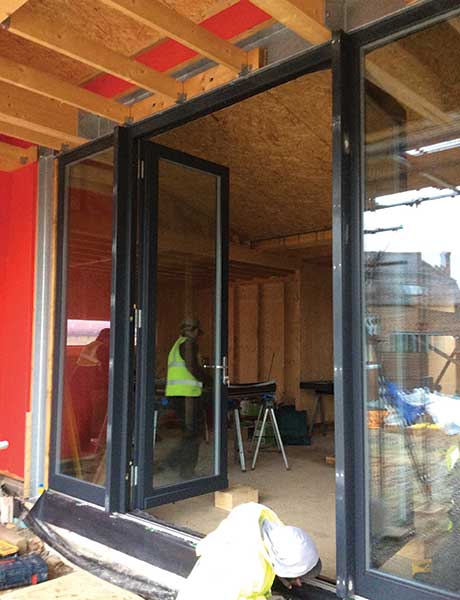 Potton specified high-performance, triple-glazed timber frame windows and doors from Kloeber for its Passivhaus build. Set back from the main elevation and located beneath an overhang, the large area of glazing is protected from the high summer sun to prevent the interiors from overheating

Installing the Windows and Doors

As with the MVHR system, in my view it makes real sense to purchase certified windows and doors for incorporation into a building where Passivhaus certification is the ultimate aim. They are another critical, complicated and high performance part of the building envelope and errors in the design and specification are likely to be expensive to address. Specifying certified windows does not obviate the need for care, but it does provide some reassurance.

With our very large 8x3m opening, we knew we had to be especially careful with the specification of the window and door elements, and so worked very closely with our partners at Kloeber to ensure we had not only the most appropriate specification but also the correct information entered in the PHPP analysis. We decided upon a contemporary style of timber window with insulated frames and triple glazing. The specification of the glass within the windows was an element that received particularly close scrutiny, as it has a marked effect on the overall performance of the home.

The windows have U values of between 0.71 and 0.79W/m²K depending upon their size; the smaller windows have a higher (worse) U value because of the increased impact of the frame which does not perform as well as the glazing. For comparison, the external walls have a U value of 0.10W/m²K and most of our projects have windows with a U value of 1.2-1.4W/m²K. So, while the doors and windows are clearly a weak link in the thermal envelope (compared to the walls), the Passivhaus-certified product we have installed is significantly better than the current norm.

Another point worth noting is overheating. The large south-facing set of glazed doors are set well back into the building and are protected from the impact of the high summer sun by the projection above, which not only offers shade but also provides a covered outdoor space.

We were confident we knew how to go about detailing and constructing an airtight junction between the windows and the rest of the building, and the smoke test revealed just how impressive the airtightness of the installed units was — particularly the large glazed opening doors.

The windows and doors were sealed to the structural frame using the Tremco Illbruck i3 system, which we have used on numerous projects in the past.