Marcus and Fiona Harling’s new oak frame home sits on the most perfect walled garden site and is a masterclass in sensitive, sustainable building.

What started out as a redesign and extension project for the couple turned into a far more ambitious venture when they decided to replace a small 1960s bungalow with a brand new house.

The Harlings had purchased the bungalow primarily because of its unique setting within a former kitchen garden to an 18th century Gothic Revival country house. A high brick and stone wall surrounds the 1.8 acre plot, and mature gardens incorporate a natural stream feeding two ponds. 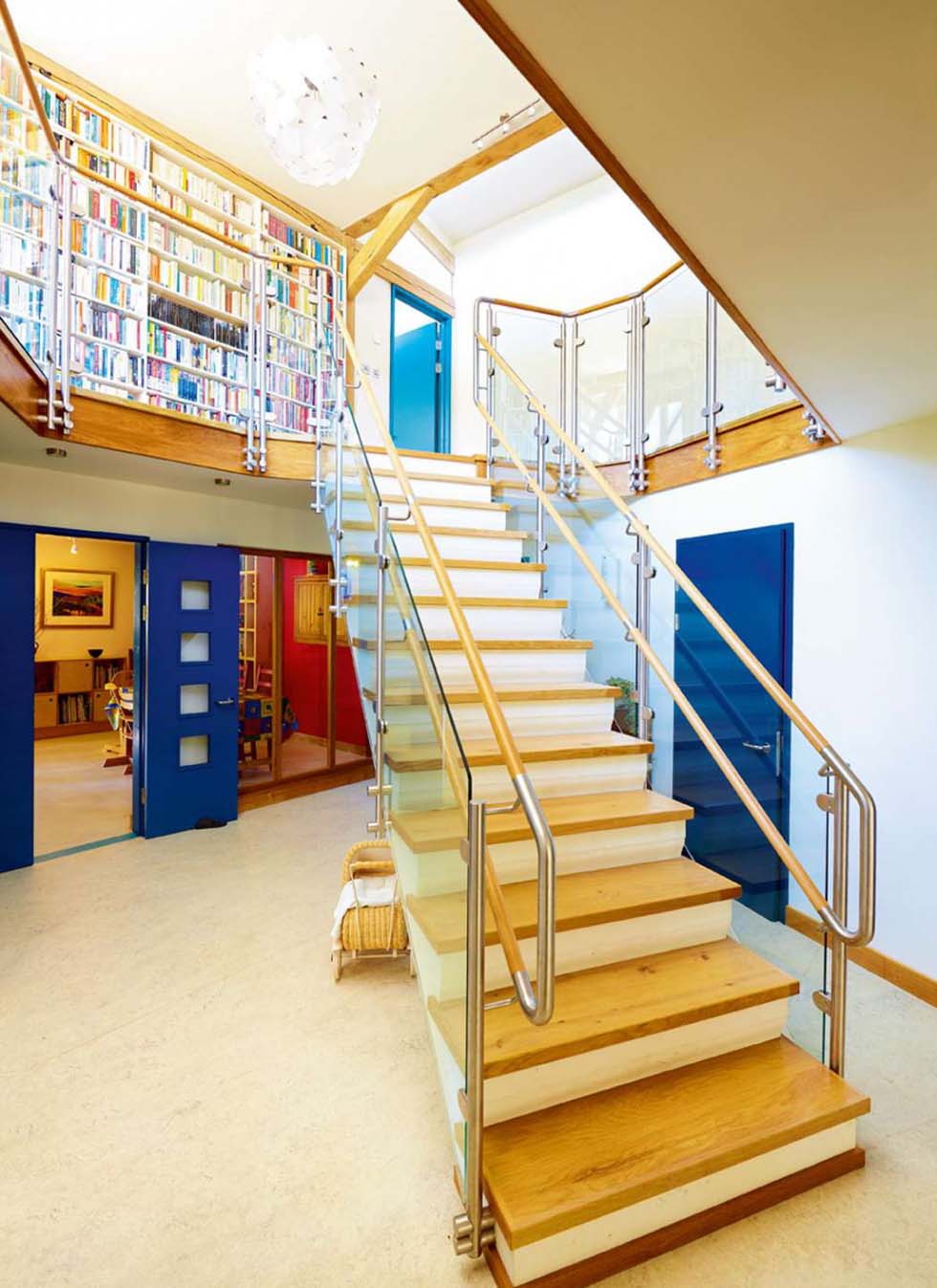 The bespoke staircase leads up to a first floor library area. Internal doors are from Laidlaw.

“The bungalow was originally built by a couple who taught at an adjacent school, and our plan was always to completely remodel and enlarge the outdated building,” explains Fiona. Not long after moving however, the couple decided that building a brand new house lower down on the site would give them all the space and light they needed. The couple drew up their own initial design for the house overlooking one of the ponds — aligning a faceted living room with the curve of the pond to make the most of the waterside setting. This helped to create the distinctive shape of the house, with large windows in the single storey living room, study and kitchen allowing ripples from the water to cast light inside the rooms and against the 18th century brick wall surrounding the site.

“Setting the house into the slope to decrease its external volume meant that a basement construction to the rear made sense,” explains Marcus, a construction lawyer. In search of a high-performance solution, the couple looked at prefabricated systems and chose German supplier Kastell. With the inclusion of the basement and the contemporary design this was always going to be a hybrid build, and an oak frame was an early aspiration. After a false start with another supplier, Marcus and Fiona contacted Oakwrights and were extremely impressed by the company’s positive attitude.

“The Oakwrights team were instrumental in bringing all of our ideas together, and adapted their system to suit our contemporary design,” says Marcus. The house incorporates both passive and active eco features and has been orientated so that significant areas of glass face south, with the earth-sheltered rooms protected from the elements to the north. Insulation levels are high, and include a combination of natural cellulose insulation and sheeps wool.

Externally, the walls and oak frame are clad with untreated Siberian larch, whilst green planted roofs over the sitting room and kitchen give added insulation and the sedum flowers also help to blend the house with the surrounding garden.

Underfloor heating is fuelled by a biomass boiler which uses sustainable wood pellets, fed automatically from a hopper — providing carbon neutral heating at a fraction of the cost of oil. In summer, hot water comes from an air-to-water heat pump which extracts warm, stale air from rooms, returning cooled air to provide air conditioning.

The family carried on living in the bungalow on site during the protracted planning process and 20-month build. The couple and their children – Emily, 15, Jago, 11, and Olivia, now five – were excited to move from the old bungalow into their brand new home, which has exceeded everyone’s expectations. “The house is almost part of the garden,” says Marcus. “We feel extremely lucky to have found such a wonderful site.”

Find out more about oak