Down a small, rural lane, set in the heart of Hampshire, sits Fox Pightle. If you didn’t know better, you’d think the oak frame, weatherboarded cottage had stood for decades.

It nestles neatly into its 0.4 acre greenfield plot, sunk down slightly to counter a small slope, and looks every inch the postcard-perfect country home.

For Shelagh Krasno, building a house on her own was not something she expected from her life, but when she found herself newly single, she spied an opportunity to carve out a new house in the garden of her previous family home. 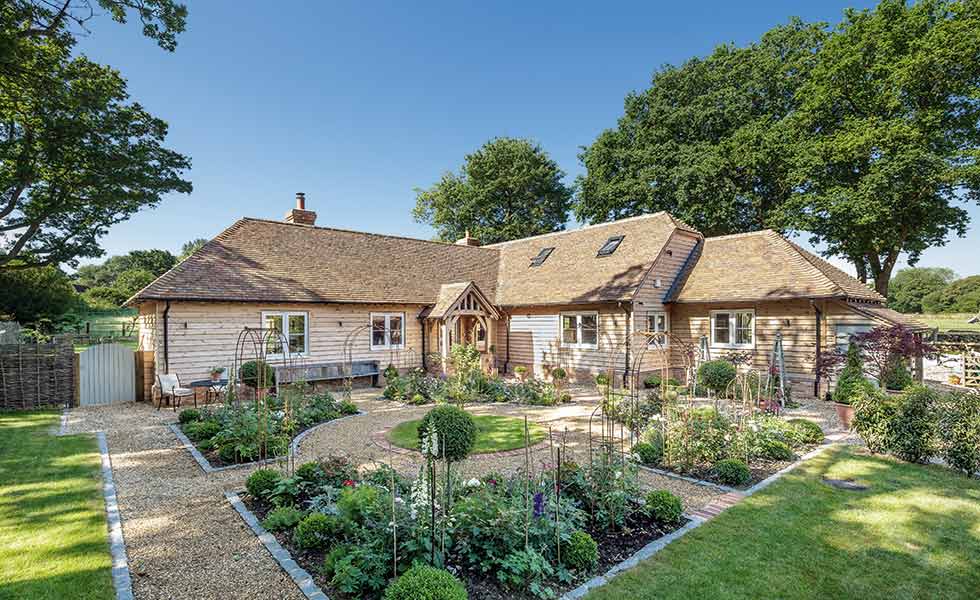 And so, she contacted Frank Dowling, who had designed an extension for her previously, but had relocated to Norfolk. However, he was happy to help Shelagh come up with a design, and willing to pass on his contacts.

First, though, Shelagh had to decide what she wanted to build. Frank’s design was for a traditional weatherboarded bungalow with oak elements and an open plan central space. It featured a downstairs bedroom for Shelagh’s father, and a snug tucked away from the open-plan space thanks to the L-shaped design.

(MORE: Is Oak Frame Right for You?) 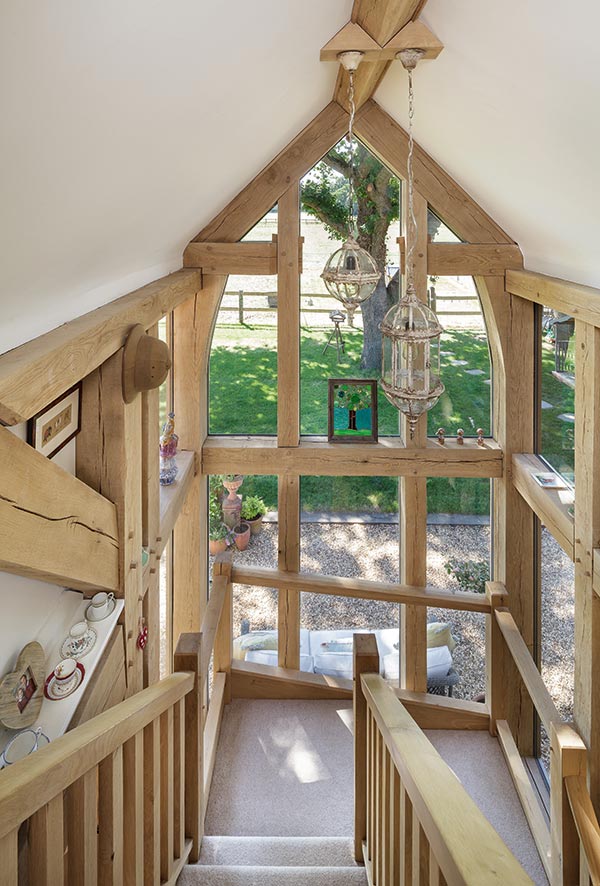 Once approval had been given, dormers were added to the design under Permitted Development to create a two-storey property, providing two further bedrooms upstairs.

The plot is out of the settlement boundary of the nearby villages and, as both Frank and planning consultant Ian Lasseter feared, the initial application was rejected.

Shelagh approached a borough councillor for advice, and he ended up speaking – alongside Shelagh, Frank and Ian – in favour of the house when the application went to committee, where it passed unanimously. 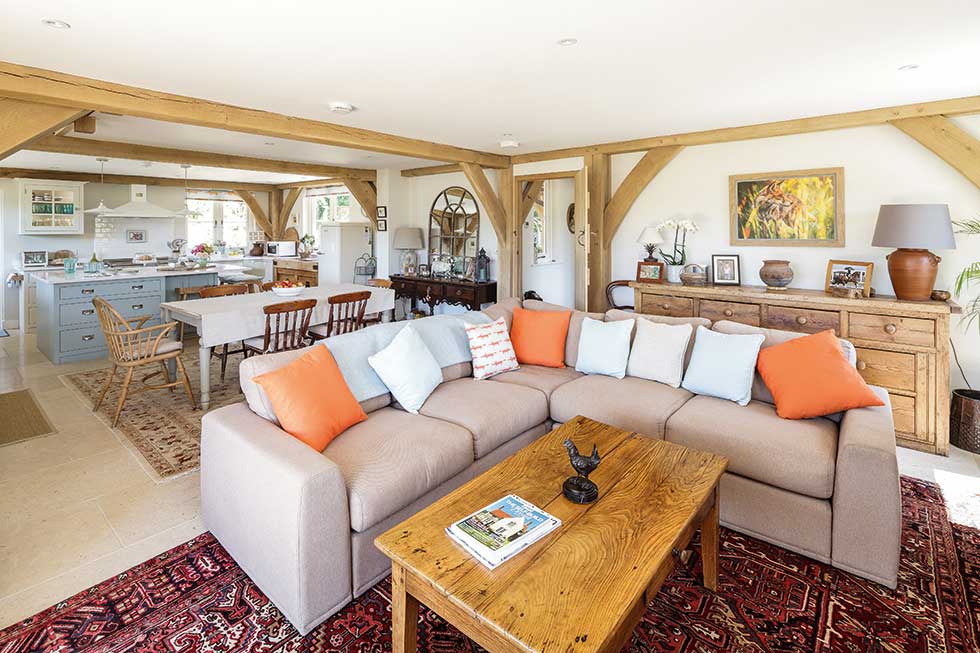 “After we’d got planning, we came to the idea of using an oak frame,” says Shelagh. “We’d already designed the rear elevation in oak and one day I rang Frank, a bit tentatively, and said ‘I’d love an oak frame house’.”

After thorough research, Shelagh chose Westwind Oak to supply and erect the frame and install the SIPs Kingspan encapsulation system and the SIPs roof. She requested the widest spans between the oak bays as possible. “I loved my old house, but I wanted this to feel lighter,” she recalls. “But I still wanted the oak because of the character it gives.” 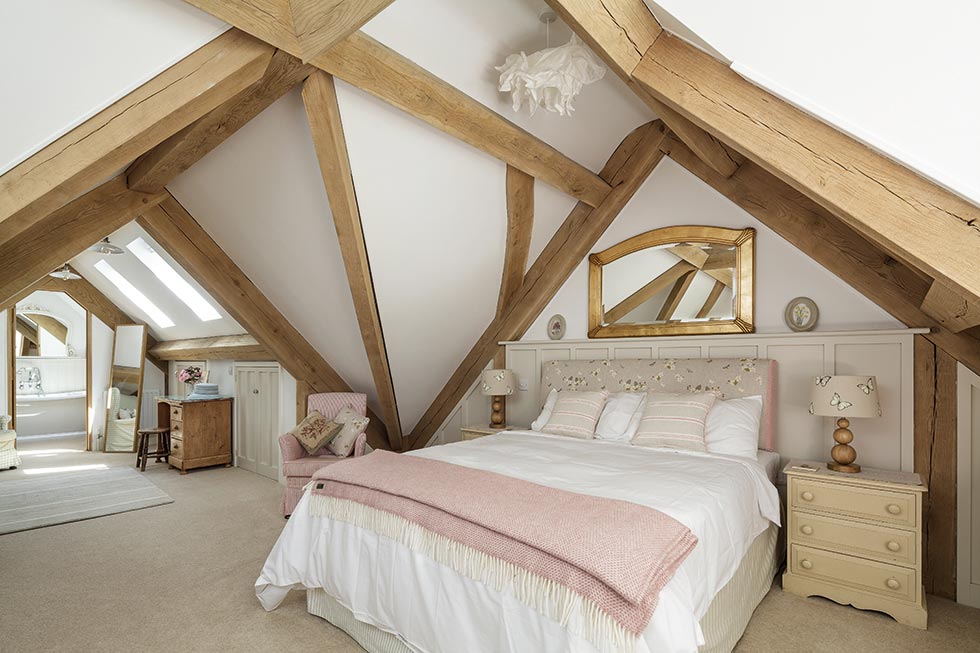 Two bedrooms in the eaves, including the master, were added at a larger stage of the design to add architectural interest as well as extra living space

Key to the success of Fox Pightle was the team that Shelagh assembled to deliver it, with the emphasis on picking characters that fit: “I had to trust my intuition with tradespeople and looked to hire those with ‘can do’ personalities,” says Shelagh, who at 60, and on her first major project, took on responsibility for the project management.

Allan ‘Big Al’ Oxlade was brought in as the builder after Shelagh had worked with him previously, while her groundworker, Steve Mills, lived across the road. She also formed a good relationship with local architect Jeff Brown, who was brought in to deal with building control and act as a sounding board for Shelagh’s ideas. 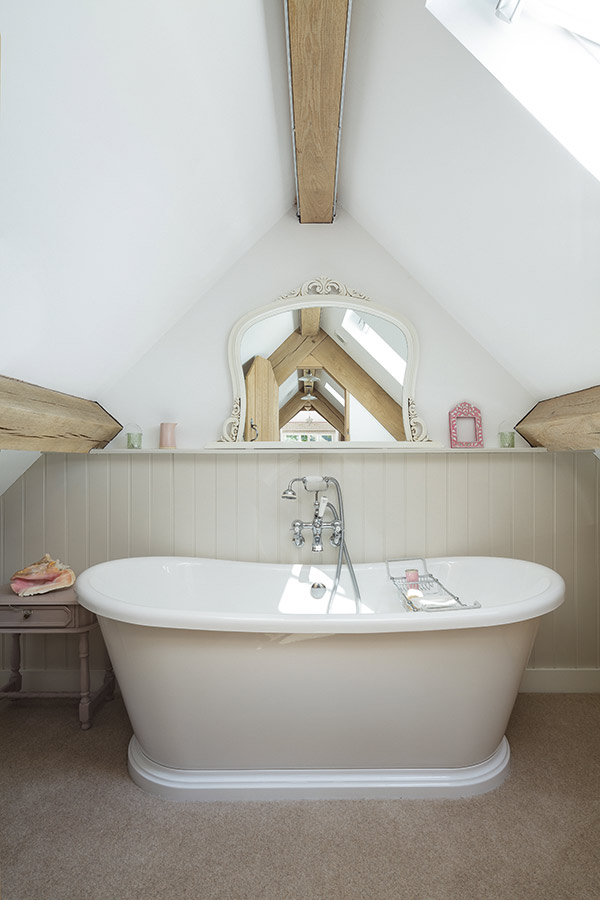 The en suite sanitaryware was sourced from Island Bathrooms, Salisbury

“Whenever I was stuck on anything or doing research, I could phone Jeff. Whether it was considering solar panels or the sewage treatment plant I needed, he was always calm and pernickety — in a good way,” she laughs.

The build took almost exactly a year. “It could have been done quicker,” she admits, “but because it was new to almost everyone involved, there was a bit of head scratching going on.”