I have an admission — I hate those silly timber cladding panels on the exterior of new homes. They are so 2010, so now, so statementy. And they are everywhere, especially on city flats, often high up where only a brave soul would dare to venture on a triple extending ladder, or worse, a scaffold tower.

The timber in question is usually western redcedar which is remarkable because it’s so oily that, despite being a softwood, it can stand out in rain, sun and frost for decades and survive. You don’t need to paint it or stain it, or treat it with anything at all. It just doesn’t rot, and so it gets used in all manner of exposed areas.

In the past few years, western redcedar has become a statement product, marking out a building as being green, even when the building itself isn’t in the least bit green. Cedar has become a flag for sustainability and it is being used by some lazy designers because it photographs well and makes a pleasing contrast with brickwork or, better still, white render. But come back in three or four years time and, chances are, it will be discoloured either by sun shadowing or water staining. Brand new cedar panels look fantastic. By year three, they look a mess. But by then, the photographers have long gone, the flats or homes are sold, and it doesn’t really matter anymore what they look like. So you’ve ended up with this daft little cedar panel which looks awful, sitting somewhere quite inaccessible, which you can’t paint or repair and can’t cherish in any way. Not nice. 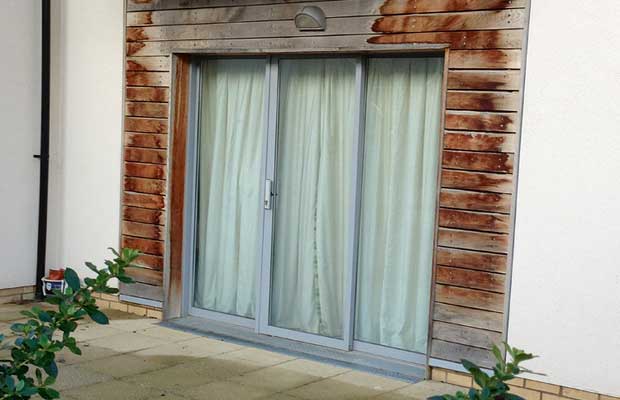 Timber cladding looks great but if not handled correctly is likely to deteriorate quickly after installation. The image above show the effects of water staining — it usually works itself out in time. The use of nails can also result in rust stains (avoided by using stainless steel).

What people really want is a good-looking home that both keeps its good looks and is easy to maintain. Easily written but surprisingly difficult to achieve. For one thing, materials like cedar cladding go in and out of fashion and self builders set and follow architectural trends, many of which have anything but maintenance-free results.

A classic example of this is the hardwood floor, which appeared on self builders’ wish lists sometime in the 1990s. No one wanting an easy home would ever consider fitting an exposed timber floor. Laying them is never as straightforward as the fitting instructions suggest. If your underlying screed isn’t completely dried out, you’ll be in trouble because the timber will take on moisture and buckle or warp. And even if the screed is dried out, the boards still move — and squeak. As for looking after them, you are either an oiler or a sand and sealer: neither practice is exactly a bundle of fun. We know all this and yet we want hardwood floors.

Then we have shower screens. The bigger the better. They look fantastic, and it’s amazing how you can divide bathrooms with them. But wait till you have to clean one. Wetrooms have become another recent trend that flies in the face of the desire for the maintenance-free home — unless you like wet bedrooms, corridors and landings as well. Whilst we pay lip service to wanting a maintenance-free home, we tend to go for what we want, however much work is involved.

Not that maintenance-free is a bad idea. It’s just not always easy to define. Do we mean simply that it takes little or no looking after, like a brick wall? Or that it never gives us any problems? They are not quite the same thing. Lots of products are designed to be maintenance-free but end up causing grief because they don’t work as designed. Take the services in a new house, especially the heating. No one expects them to misbehave, but misbehave they do, resulting in frequent call-backs. The more complex the systems, the more there is to go wrong.

There is an area of study which seeks to quantify maintenance expenses and to try and work out what the costs of various material choices really amount to over the years. Take the window dilemma. For many years, there has been a basic choice between timber, which looks good but needs repainting every few years, and plastic which lasts forever (or does it?) but doesn’t often win on kerb appeal.

Many people opt for plastic windows on the grounds that they are maintenance-free but it’s often actually cheaper to pay someone to repaint a timber window every seven years than it is to replace a plastic window every 30 years. Now such a statement comes with provisos; plastic windows vary a lot in quality and good ones will probably last much longer than 30 years. Perhaps more importantly, windows these days are double or even triple glazed and the glazing may well fail before the frame. In which case, the whole issue begins to look less relevant.

Tips for an Easy Home: Exteriors 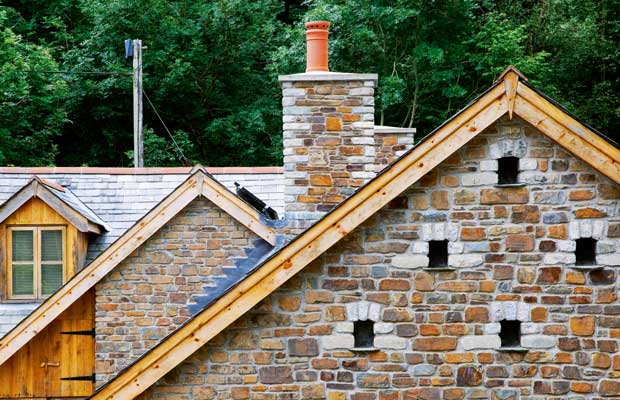 Find out more about this stunning stone cottage

Brick and stone perform wonderfully well. They need no maintenance and will last for centuries, although they do sometimes cause problems because they ship water and can cause cavities to be breached. Render is better on this front, but requires painting; self-coloured render doesn’t require re-painting, though it can discolour with mould or stain. Timber is problematic — especially unpainted timber which discolours and can look very poor after a short time. Painted timber requires repainting every decade or so.

Most roof covers will wear reasonably well but note that clay weathers better than concrete. Likewise, natural slate also beats synthetics both in longevity and looks. On flat roofs, there is a big discrepancy between the cheaper felts which will last maybe 15 to 20 years and the more expensive materials which last much longer. And remember, all roofs require attention from time to time — they are never ‘fit and forget’.

With joinery, people tend to prefer the look of timber but are worried about the maintenance, and so there is now a move towards timber windows with metal cappings — rooflights are a prime example of this. As a rule, the more money you spend on doors and windows, the less you experience problems and the less maintenance there is.

Guttering and fascias are troublesome to maintain and the industry standard is to use plastic, which may not last more than about 20 years. Metal (cast iron, aluminium, copper) gutters sell themselves on longevity — at a price. Parapet gutters, as used in many Georgian designs, are notoriously high maintenance. Indeed anywhere on a roof where water is allowed to pool up is a weak point.

Most interior fittings are designed to be low maintenance. If things go wrong, it is often because there are underlying issues in the structure which tend to appear as snags in years one or two, such as shower leaks, doors sticking or tiles working loose. One emerging technology that is designed to address these issues is the timber I-beam or Posi-Joist, neither of which shrink or move and thus present fewer problems with the finishes above.

Those seeking trouble-free heating and hot water would probably do well to keep things as simple as possible. Anything involving pumps, switches, thermostats and controls is going to require looking after. As we move towards renewable heating systems, the problems are likely to multiply, especially as different technologies are being combined, such as heat pumps and solar panels. Even modern condensing boilers seem to require more servicing than the old cast iron ones that they replaced.

Probably the single most effective strategy is to employ one business to design and install all elements of the heating system and then, if possible, use them to carry out servicing. Then if something goes wrong, at least it is clear who is responsible.