What happens when a group of people decide to get together and commission a single project to serve all their housing needs? Cohousing, as it’s known, accounts for 10 per cent of all new dwellings in Berlin, and is being seen by the powers-that-be in housing and planning departments in the UK as an interesting part of the armoury to solve the housing crisis. All very well, but for those of us who feel a home is a chance to escape other people, and think the idea of shared facilities is something best left to student memories, what is such an arrangement like to live in and, just as importantly, what is it like to build?

There are already a few landmark cohousing schemes up and down the country, previously featured in our magazine – notably LILAC in Leeds and Forgebank in Lancaster (have a look at the excellent Collective Custom Build website to search for more) – but the first in London, 1–6 Copper Lane, is a great example of how cohousing provided a very specific solution.

London, of course, has its own unique housing market that makes those of us living elsewhere in the UK rather glad we’re not there. Rocketing housing prices and a huge influx of foreign investment have ensured double-digit price growth in recent years when the rest of the UK has trundled along with modest common sense. All very well for those of us in the Shires — but what if you do live in the Capital? More specifically, what if you’re trying to get that next step on the ladder, the family home ideally with a garden, and all around you’re looking at prices that left reality behind years ago? 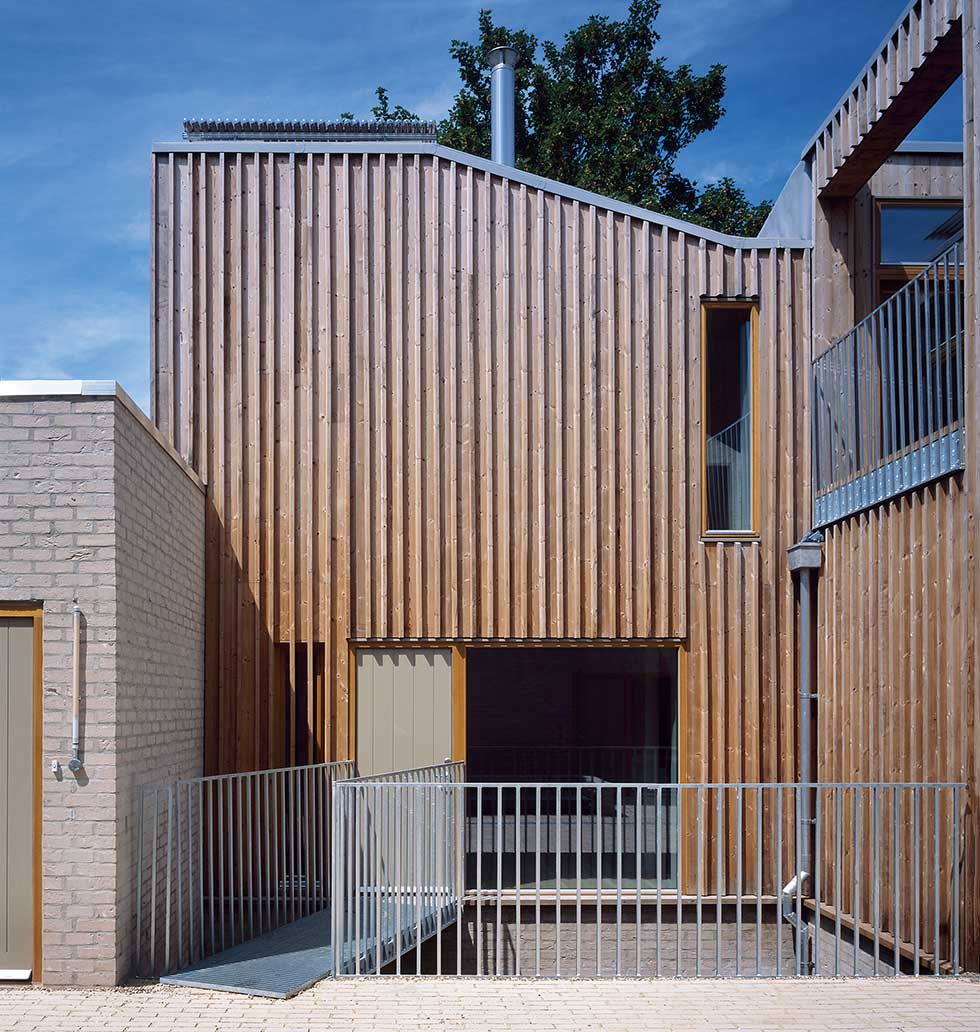 Some of the houses have three storeys, others two. It’s all about introducing a sense that these are six very different homes rather than a group, unilateral project

Back in 2008, two members of the group came across a 1,000m² backland site occupied by a rundown church in north London. They asked around and eventually six families formed a limited company with the intention of buying the land (without planning permission) and turning it into six homes to meet their needs.

Simon Bayly, one of the group, explains it thus: “On a purely pragmatic level, we are returning a derelict site to use in a way that’s hopefully appropriate to the local situation. The project would not have been commercially viable at the scale we are doing it for a developer, because they would expect to make a sizeable profit on what is a risk-laden and time-consuming activity: buying land without planning permission; taking a minimum of three years from start to finish; and many unknowns along the way. That is why a developer would want a significantly denser level of housing, to create more individual units, as is clearly evident from most speculative new build projects in cities. It’s viable for us because we aren’t looking for profit, and building new in London is cheaper than buying a ‘second-hand’ house.” 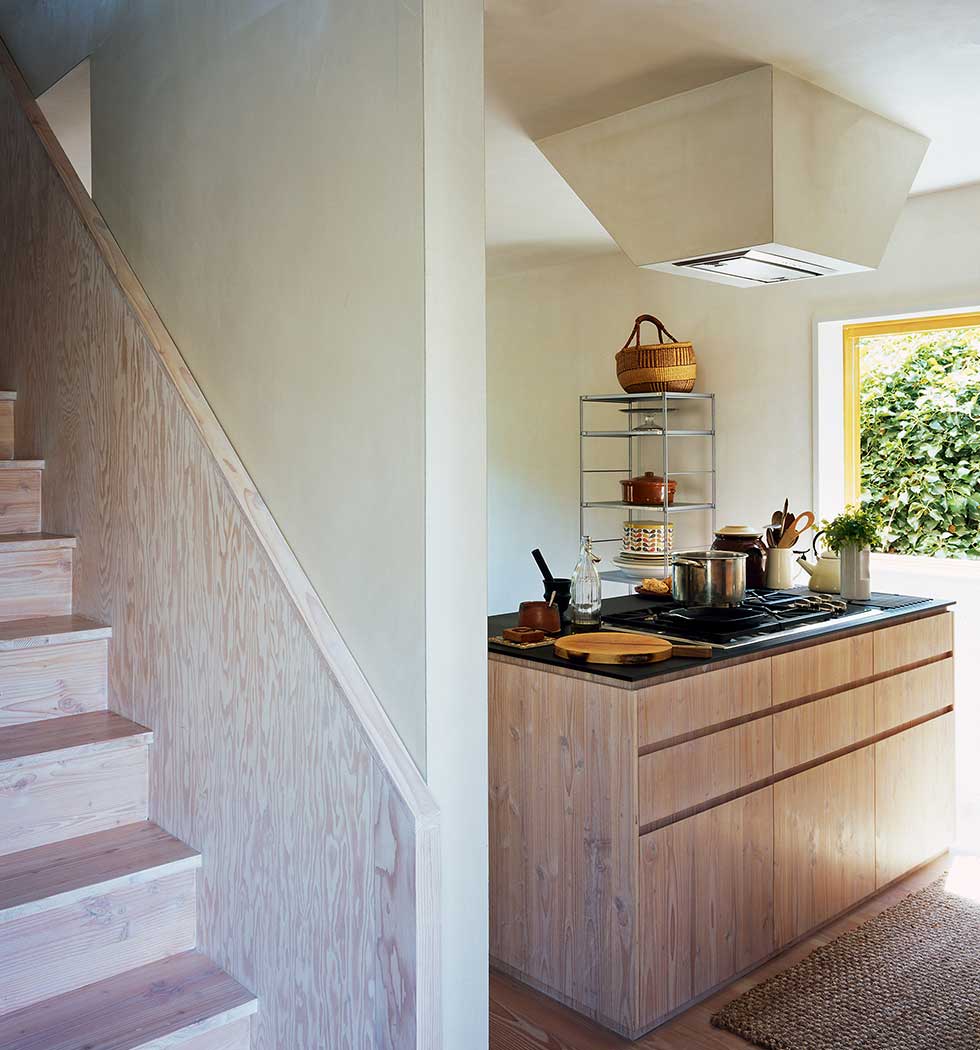 Certain elements of the houses are fitted out collectively — with Douglas fir being the key material for the staircases, fitted furniture and flooring finish

The structure of the group is impressively formal: all members are “directors” of the company, which owns the freehold and the common parts of the development. Individual households own the leaseholds on each unit within the development.

The six families were keen to pool their resources and create a clever balance that avoided the approach a traditional developer would have taken. Instead there’s a mix of privacy and the traditional ‘home’ values that most of us relate to, and the benefits of communality, with shared public spaces and all the efficiencies of spatial design that working together allows. The group describes itself as coming from a variety of cultural and professional backgrounds, from designer to artist to psychotherapist.

The members shared a set of design principles for the project above and beyond basic objectives of cohousing, and a wish to work in a democratic and considerate way. The purchase of the site was financed by the group’s pooled funds, with the later construction of the project funded by a mortgage from the Ecology Building Society, who specialises in arrangements for schemes with particular socially conscious aspects. 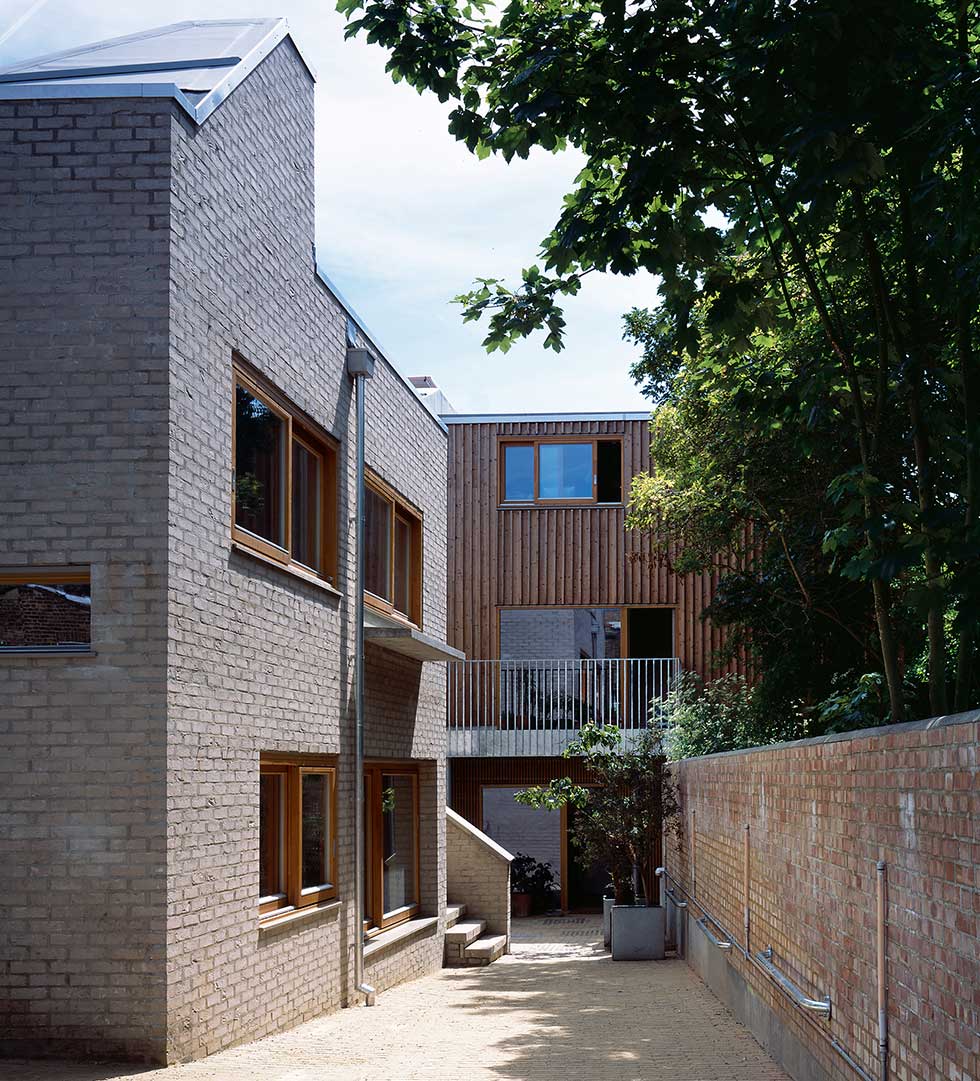 They appointed Henley Halebrown Rorrison Architects to help them realise their scheme. The Copper Lane Group formed a brief around a sustainable approach to construction, energy use and land management. Key elements of the design were the maximising of shared resources including laundry facilities, a communal hall and gardens. Planning permission for the finalised scheme at 1–6 Copper Lane took five months and was granted in March 2012.

The scheme is an interesting blend of inward and outward-looking elements, with all six houses designed with views of their own garden areas, but with the front doors opening onto a relatively public courtyard-style space. This garden perimeter helps to reduce the impact of the development on its surroundings and feels a little like an island in the middle of the high-density urban environs.

The timber frame houses are built with energy efficiency in mind with extra insulation, high levels of airtightness and heat recovery systems, and clad in timber and brick. Internally there is a shared palette of materials — a lot of engineered timber, ply and polished concrete, with each home challenging the traditional concept of terraced home living in a slightly different way. Each home feels part of a collective but none are entirely the same. 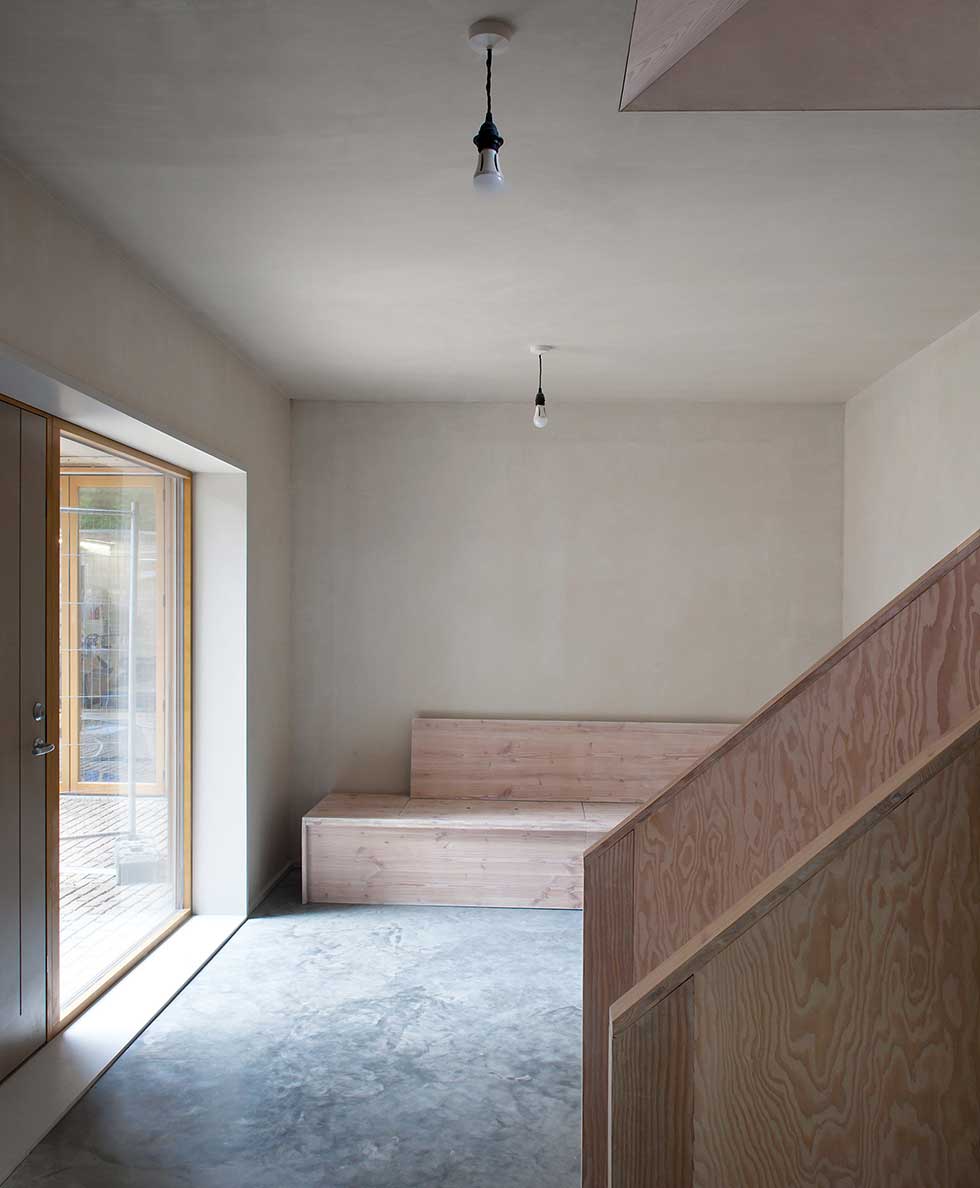 The communal central space is finished with a polished concrete floor

So how communal is it? How does it fit? At the time of Homebuilding & Renovating’s visit, the group were still in the process of moving in. Some families were further down the line than others. It was clear that it had been a long process — some six years from the first genesis of the idea to the reality of unpacking boxes.

So what are the good things? For one, it doesn’t feel like inner-city London, for sure, and the collective whole is certainly bigger than the sum of its parts when it comes to a nice, attractive mini-community off the beaten track — on a site that an individual could only have ever aspired to if they were a hedge fund manager or investment banker. Another plus is that the six homes feel part of something yet are not overlooked and have plenty of privacy.

Cressida Hubbard of Copper Lane Group sums up their intentions: “We were looking for a way to retain our own self-contained living spaces, combined with a number of indoor and outdoor spaces that would encourage different forms of interaction — sharing a meal, planting a vegetable patch, a chat over the washing machines, book sharing through a communal library, a shared workspace, a ping-pong table, a community dog, a place to bump into each other and exchange a few words before the end of the day.” 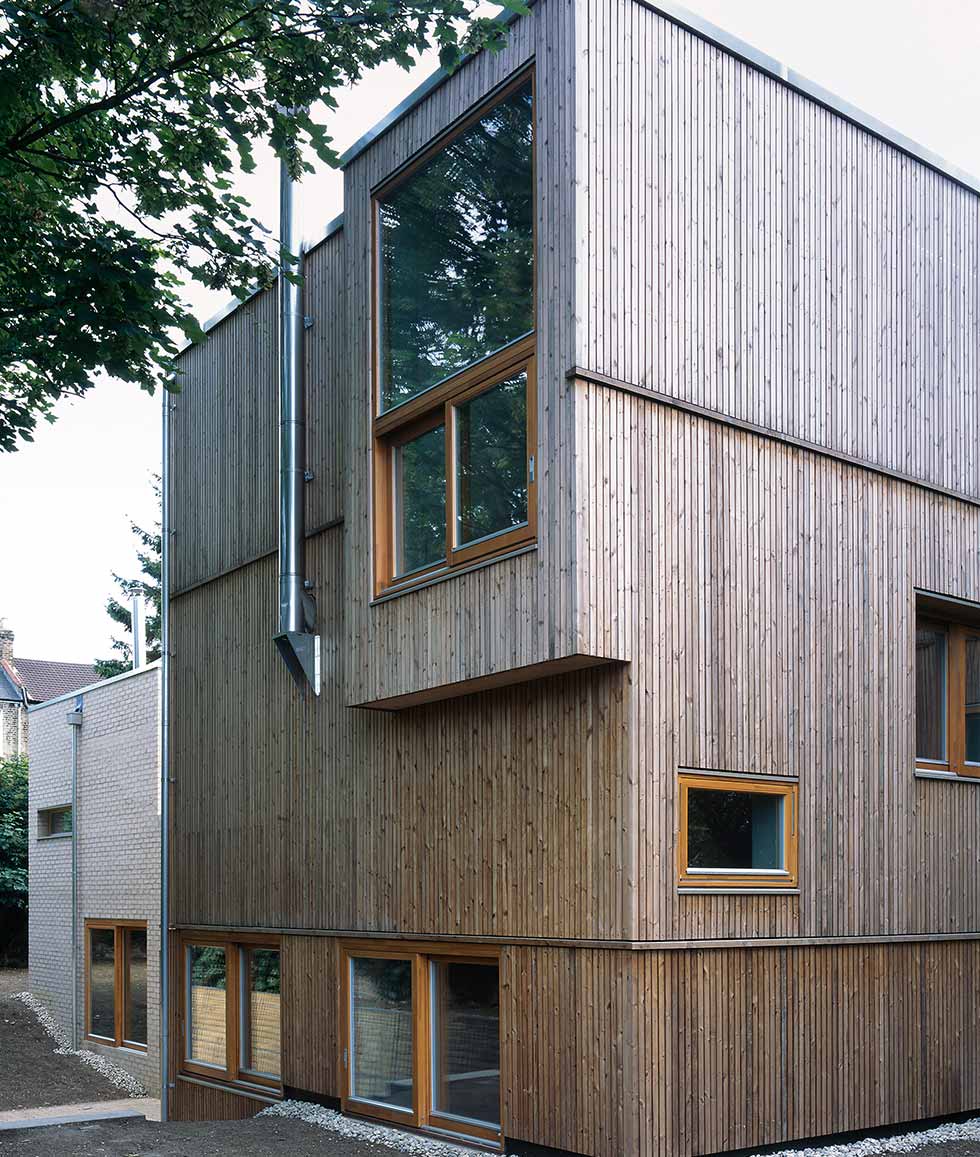 So is it a success? Architecturally, developmentally, yes — it looks great and is a thousand times better than what most commercial developers would have done with this great, rare opportunity. Does it work for the members of the group? Yes: the owners we met on the day seemed enthused, relieved and perhaps already a little fed up with questions about how this rather continental way of building homes has worked out. After all, when you think of it like a small development where you get to choose your friends and neighbours, and chip in for a bit of collective babysitting and shared gardening, then it sounds all ideal.

Copper Lane puts a marker in the ground for this type of self-build — and it shows that cohousing, while definitely not for everyone, has a significant role to play in helping us meet our future housing needs in a much more imaginative way.