In Cambridge, a group of like-minded people are getting together to build their own homes. Mark Brinkley checks it out

K1 is a Cambridge-based group that looks like it’s about to make it off the drawing board. It has passed the critical mark of 18 committed households, and is now recruiting a further 22 to fill the scheme before building work starts. I attended an open evening in August 2013 which was set up with the specific aim of finding more recruits. About 30 potentials turned up and, together with many of the existing members, they filled the local community hall to hear presentations of what they hope life will be like in K1.

The first thing that strikes you when you visit the site is that it’s anything but posh. It’s in the middle of a rather soulless new housing estate – Orchard Park – on the northern fringe of Cambridge. It’s called K1 because that is how the site was originally designated by the master planners back in 1998. Not only is the site surrounded by three storey social housing blocks, but it’s only 150 metres from the A14 — along which 70,000 vehicles a day pass. And, to make matters worse, it has a small electricity sub-station slap bang in the middle of the plot — apparently it can be moved at a rather large cost, or it may be incorporated into the scheme. It’s not the obvious spot to build an aspirational utopia, but needs must. Cambridge has had a tentative co-housing group, Enlinca, since the 1990s and, like so many other cohousing groups, it has never managed to procure a suitable site. So, when K1 appeared as a realistic option, several members decided to take the plunge. Liz Roman, one of the original founders of Enlinca, commented on how difficult it had been to get anything off the ground, partly because groups are fluid — i.e. people come and go. “I am a bit put off by the K1 site itself, but I have wanted to live in co-housing most of my adult life and so I am happy for it to happen here.” 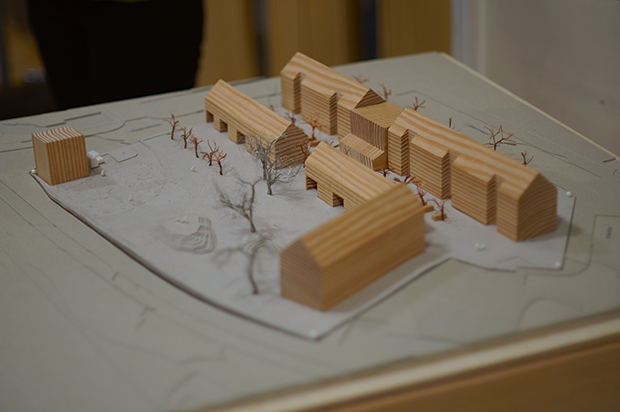 The model shows the concept for the K1 housing scheme, which aims to provide 40 homes by 2015

K1 only appeared as a potential cohousing site due to some backroom lobbying by Stephen Hill, a well-connected director of the UK Cohousing Network, who persuaded the Cambridge planners that they ought to make some land available for cohousing. As development on Orchard Park stalled during the recession, K1 was a vacant lot looking for a use and the local authority were happy to test the water and see what came of it. When some of the early Enlinca members indicated that they were happy to settle in Orchard Park, they began to put a team in place to make it all happen. One of the local authority’s stipulations was that there should be at least 18 households committed to the venture before it would give the go-ahead for a sale. 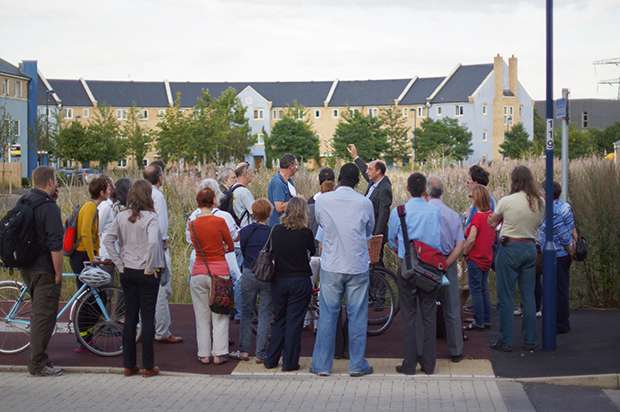 How the Scheme Works

K1 is now in that interesting space where it’s transforming from being an idea into something concrete. Up until this point, it’s been desperate to recruit anyone: from now on, the existing group will be able to become a little bit more selective, although how it goes about this isn’t that clear-cut. One of the embedded values is that decision making should be by consensus – one vote per household – so consequently, decisions tend to happen a little slowly. This became clear when the site’s architect, Jim Ross of Cambridge Architectural Research, made a presentation to the assembled group in the Orchard Park community hall. The project is still at the ‘imagineering’ stage, and lots of work is going on within the group about who gets what and what goes where. The group have decided already that they want each home to meet PassivHaus standard, but just how and where each home will be built has yet to be resolved. There will be no hands-on self-building — the whole project will be passed over to a main contractor, yet to be appointed. Jim Ross seems to act as much a facilitator as an architect, prompting the group towards the consensus decisions they need to reach before they can press the green button for the final go-ahead. The plan is to start on site in 2014 and for everyone to move in sometime in 2015.

The K1 open evening which Mark attended in August 2013

The introductions from the core group were fascinating. Rona MacLean had recently moved to the Cambridge area with her husband and was renting in nearby Cambourne. She said that they didn’t know anyone and felt quite isolated. Initially, they had looked at doing a conventional self-build but became intrigued by K1 after viewing the website. “I love to garden and to grow food, and I also love the idea of an intentional community.” John Leighton, however, hates gardening and was looking forward to others doing it: “I am very happy to contribute what skills I have, and have agreed to act as group treasurer. I don’t just want to build a house, I want to build a community.”

Or, take Sandeep Taylor who has been renting in Cambridge for eight years and is about to get married and is wanting to buy somewhere: “I like K1 because it’s not just sustainable, it’s just easier to live in. I want to say ‘hello’ to my neighbours and not just walk past them.”

Of course, this kind of lifestyle isn’t for everyone. Robert Copcutt, one of the long-term Enlinca members who has been deeply involved in K1 since the beginning, pointed out in his talk that the whole site plan is being developed in a way that you will bump into your neighbours regularly and that if you weren’t the type who wanted to co-operate with them, you probably wouldn’t fit into K1. The K1 website has more information on how this intentional community plans to operate, but one key feature will be a common house where there will be a space for community meals to take place. While communal meals will not be compulsory – every unit will have its own kitchen too – it would be anticipated that the community members attend frequently. 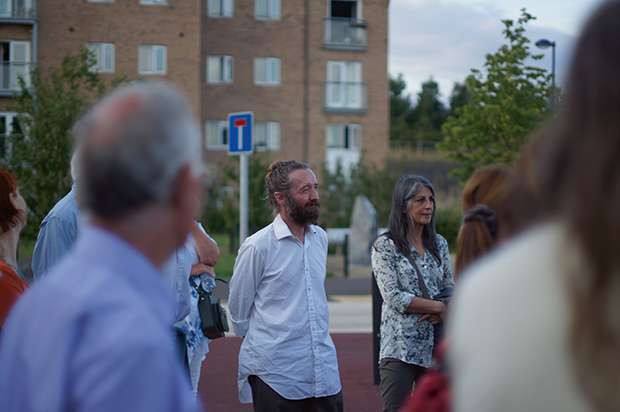 What of the potential joiners? They were a very mixed bunch. There were a few grey-haired ones, looking for a retirement community, but the majority were much younger – in their 20s and 30s – and looking for unconventional solutions to their own particular housing needs. Some were just curious, while others seemed to be on the verge of joining. One chap called Paul had travelled 60 miles from Norwich because his local cohousing group wasn’t getting any traction and he was considering moving to K1 to live his dream. Christina, on the other hand, was already living in a Buddhist community in Cambridge but wanted to buy somewhere, while still maintaining some of the community-like feel. One or two were hoping that K1 might be able to offer some sort of affordable housing option, but this seems unlikely — though it hasn’t been ruled out. The majority of members will require mortgages which are not easy on a specialist scheme like this. Gradually, a pool of expertise is emerging around the country which puts groups in touch with one another and helps on matters like finance and legal status. The UK Cohousing Network is a hugely valuable resource for anyone interested in finding out more.