Creating a well-executed new home in traditional style requires the services of a skilled designer and a willingness to stress about the details — and a not inconsiderable commitment to the challenge. Just one or two mistakes and the whole thing just feels ‘off’. Luckily, that’s what Dominic and Kate Fry had (in spades, it appears) when they tackled the build of a new Georgian-style home in a pretty Wiltshire village.

“We weren’t architecture students when we started, but we became fully versed by the time we had finished,” says Kate, rattling on about the Golden Ratio and Doric details (more of which later) as she shows HB&R around the new home she and Dominic created for their expanding family (of three children) with the help of hugely talented architect Alex Oliver.

The bungalow was ripe for redevelopment. It had planning approval to be extended with the site split into two and another house built next door. “I think as well at one stage the owner was applying to replace the bungalow with eight homes,” says Kate.

“When we bought it and put in an application for one, admittedly large, replacement, I think that there was some relief locally, particularly given the nature of the design. As the site is within not only an Area of Outstanding Natural Beauty and a Conservation Area, but a World Heritage Site, there was a lot of consultation.”

Luckily for Dominic and Kate, they came across Alex Oliver, a Wiltshire-based architect who specialises in traditional schemes done well. “We saw his initial sketches and knew that this was the route we wanted to take,” says Kate.

“We really liked the feel of his work — it convinced us that building new meant that we could have something beautiful. The brief was for a spacious home that worked well for a modern family but complemented the location. After that, we put ourselves in the hands of Alex.”

The scheme is undoubtedly grand – at 605m2 it’s rather difficult not to be – and is suitably formal, with a symmetrical front elevation, classical portico, well-proportioned sashes, lovely eaves detailing and much more. It’s Georgian grandeur all the way inside too, with a double-height entrance hall, sweeping wide staircase, impressive cornicing, parquet floors, 3m-high ceilings and formal room shapes.

Kate left the majority of the design work in Alex’s obviously capable hands (he produced 3D CAD visualisations to enable Dominic and Kate to get a good idea of the spaces), although they did make some layout adjustments at an early stage (“we moved the kitchen from the front to the back to ensure views over the garden,” says Kate) and handled a lot of the interior finishes. 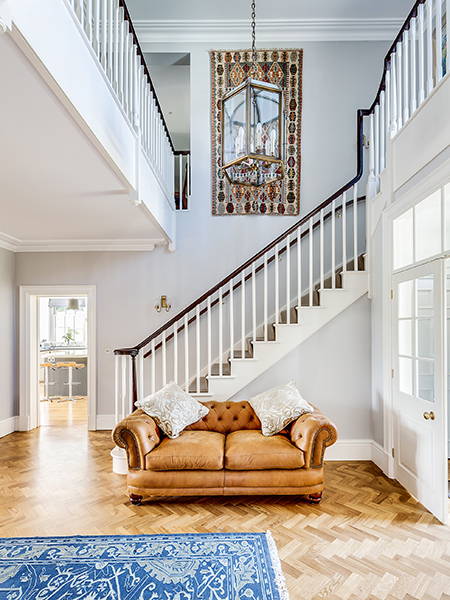 “We were particularly keen on future flexibility,” adds Kate. A third attic storey provides self-contained guest accommodation which could easily become a teenagers’ suite. The simple fact is that a house this large doesn’t struggle to have rooms and spaces that can change as required and be grown into.

What would have traditionally been servants’ quarters will inevitably be used in the spirit of giving family members space and privacy, accommodating visitors (we met a touring cricketer who had been put up in a self-contained space for the summer) and much more. Space helps enormously, but the Georgian formality has been adapted with flexible modern living in mind. 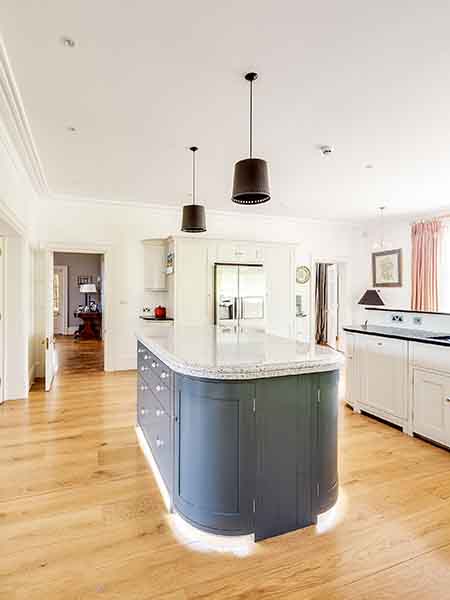 The kitchen, from Neptune, features a large curved central island underlit with LED lighting and is separated from the breakfast space by a half-height partition, overlooking the garden. A family room can be part of the space or separated by bi-fold doors

Kate and Dominic used a main contractor for the construction with a project manager (MEA Consult), who acted as a form of quantity surveyor (QS), as their point of contact on site — all supervised by Alex Oliver.

“Architects always tend to give you an idea of costs that are perhaps slightly on the positive side, which is why we were keen to have a QS on board,” says Kate. “Their cost predictions turned out to be almost exact. Having experts working with us really helped to make it a relatively stress-free experience.” Kate recalls a six-week delay, which, over a 13-month build time, is pretty good going to say the least.

“It’s amazing how many decisions you have to make with a project like this,” concludes Kate. “Everything needed our call, or a referral back to Alex, in order for it to be right. We’re delighted with what we’ve ended up with, particularly considering we hadn’t really thought about building our own home at first. The house is much warmer and less draughty than the type of home we might have bought instead, and it looks like it has been here for centuries.” 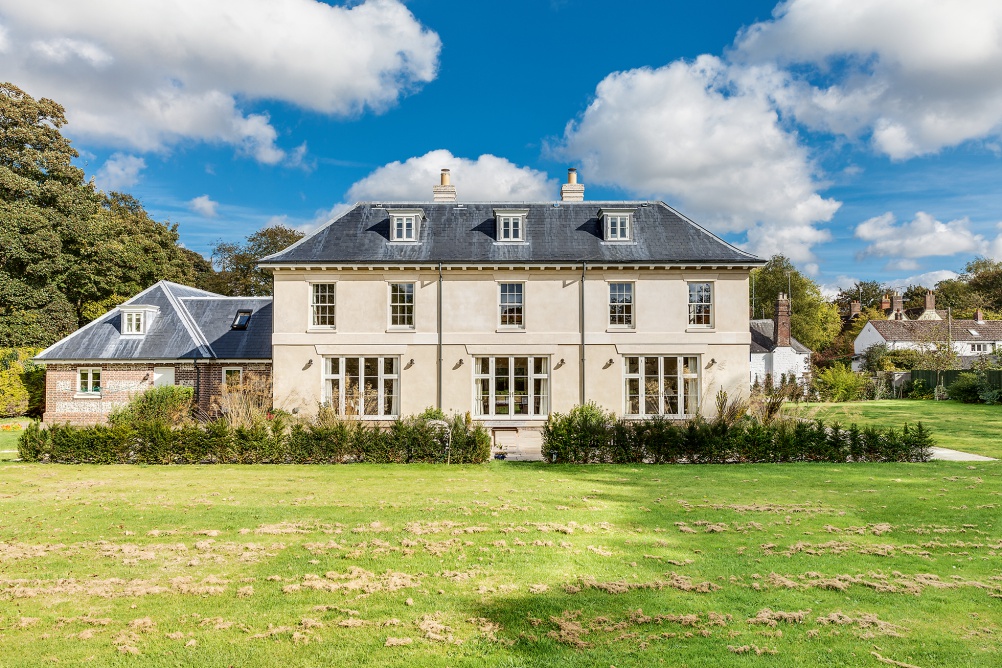 The main house is constructed in a combination of natural dressed limestone with lime rendered masonry and painted timber joinery under a roof of natural slate. The single storey ancillary wing is clad in brick with flint banding. Roof hips and dormer windows are of lead. The Mumford & Wood timber sash windows that Dominic and Kate chose fit the design requirements of the Golden Ratio (see below)

Windows and the Golden Ratio

The Golden Ratio is where mathematics meets architecture and has been used for centuries to help architects come up with pleasing proportions.