Tim and Melissa had spent 10 years renovating their two bedroom house, but when a small infill plot came up for sale, they decided to sell their home so that they could fulfill Tim’s lifelong dream of building his own home.

Taking on the plot was a huge gamble as it was small, awkward and close to neighbouring properties. However, the couple used clever design and built close relationships with their neighbours, to ensure their new build was a welcome addition to the street.

Finding building land on the outskirts of York is not an easy task, so when Tim and Melissa found an infill plot at the end of a garden, they jumped at the chance. The site measured just 500m², but came with planning permission for a three bedroom bungalow.

Unfortunately, being in close proximity to neighbouring properties on every side, any project here would need to be taken on with caution. 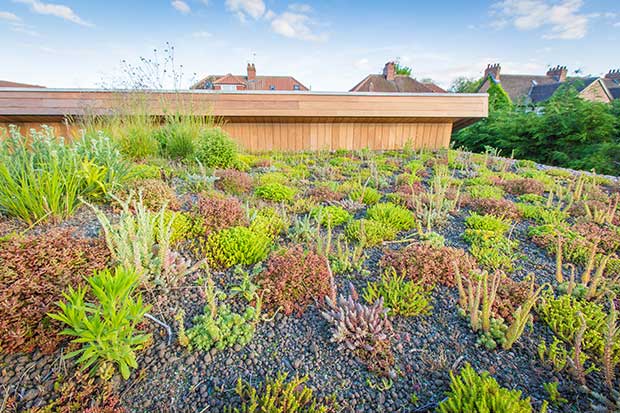 The sedum roof has over 1,000 locally grown plants, hand planted by JB Landscapes

Although the site had been granted planning permission, it had received nearly 30 letters of objection throughout its long planning history. With this in mind, before securing permission for their final design, they very sensibly consulted their neighbours.

Using their chief icebreaker – their three-year-old son – they knocked on doors to introduce themselves and discuss their plans. Understandably, many of the locals were worried about their own homes being overlooked, but the couple’s plans for a single storey home with limited windows on the outwards facing sides seemed to appease concerns.

They worked hard to show their intention to create a family home in the community, not a fast-buck development for profit — and planning was approved.

Tim’s sister and brother-in-law are both architects, so they didn’t have to look far to get their home designed. As well as their requirements to respect the privacy of the neighbours, they wanted their design to be family-friendly, budget-friendly and eco-friendly.

The resulting design was for a three-sided modern bungalow, encasing a private courtyard. Large bi-fold doors and full length windows would provide physical and visual access to this area, and bring in plenty of light.

To increase light flow, without impacting on privacy, they added more high-level slit windows to the living space on the external faces of the building. This makes for large, bright open plan living spaces.

Two bedrooms, a bathroom and a master bedroom with en suite are grouped at one end of the building. There is an office and a utility room off the kitchen diner and living area.

The exterior is clad in cedar and the sedum roof is virtually flat making it low profile and discreet. The site is then screened with tall perimeter hedging. 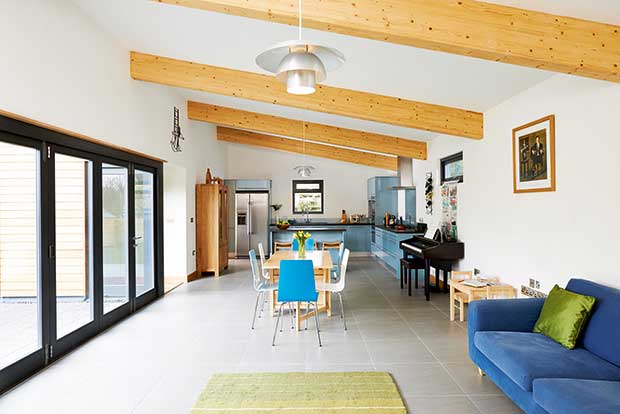 It took just nine months for the home to be ready for the family to move in to. The house had been designed with budget and low running costs in mind so a quick structural insulated panel construction was chosen. Having been stringently designed on CAD software, it slotted together like a jigsaw and went up in just 10 working days.

However, they were almost stalled along the way by their budget. The first stage of their self build mortgage was released just hours before the final deadline to pay the balance on the glazing contract.

Tim also took a risk and ignored the advice to include a floor screed in the house’s foundations. They decided to sit the property on an insulated raft slab with 300mm of EPS 100 (expanded polystyrene) insulation between the ground and the concrete. They then sat the 750m of water-based underfloor heating in the 96 tonnes of concrete which was poured on a cold night. If the pipes had frozen and ruptured, this would have been disastrous, but as everything turned out fine it saved the couple an estimated £5,000 for the screed.

Once the concrete had set, the tiled and engineered wood floors could be laid, and the interiors finished. The home has been well finished, but Tim and Melissa admit there are still a few things left to do. They are taking their time and saving up, so that everything can be done to the highest possible standards.

The couple wanted the home to be ecologically and economically friendly. This meant that any eco elements had to be financially viable.

Their starting point was creating a well insulated and airtight building using SIPs. They then installed solar photovoltaic panels on the roof and a mechanical heat recovery system and sustainable surface water management.

Finally, they added a sedum roof to absorb CO2 and water. This added a few complications to the construction, as companies supplying a single-ply membrane usually used on roofs of a low pitch (theirs is just 10°) could not offer a guarantee above 10 years when used with a sedum roof. Their solution was to used RoofKrete, a flexible waterproof render, which comes with a 30 year guarantee.

Thanks to rigorous planning and paying attention to their neighbours’ requests, Tim and Melissa’s home has been a great success. Testament to this, they won the York Design Award for the New Build (Residential) category in 2013.