How Will Brexit Affect my Building Project? | Homebuilding & Renovating Skip to content

Regardless of your personal political reaction to the results of the EU referendum, there is no doubt that Brexit has been a significant economic shock. For people building, extending or renovating their own homes the temptation is to reassess current plans in light of the uncertainty.

What we are seeing is a picture beginning to build over the coming few months that actually might be positive news. Mortgage rates at least in the short term look likely to be falling even further.

With the wider housebuilding sector in a state of shock (with share prices falling and continuing to fall) there is likely to be a reduction in their activity – meaning greater availability of labour and therefore lower trade rates. In addition, as smaller developers become more nervous about future profitability, there is likely to be a greater availability of land and renovation opportunities.

If this weekend’s Homebuilding & Renovating Show in Surrey was anything to go by, it is very much a case of ‘who cares?’ There were as many visitors as in previous years. Seminars were packed. Projects were going ahead. Windows were being bought. You could be forgiven for thinking it is all a storm in a teacup.

Of course, no-one can predict the effect Brexit will have on the self build and renovation sector in the coming months and years — along with the impact it will have on house prices. The fundamentals of this market remain favourable for people investing money in property – namely low supply levels and very high demand. 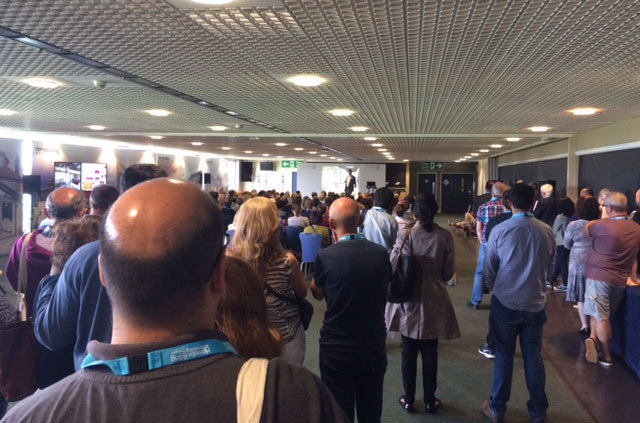 It was standing room only at this weekend’s Homebuilding & Renovating Show at Sandown Park, Surrey

My message above all is that, as we have always said – if you need to improve your home or want to build a new one, those desires will not have changed. As David Snell, the speaker and self build expert told me – he’s old enough to have been through a fair few ups and downs – “just get on with it.”

Michael Holmes – Chair of the National Custom and Self Build Association

“The vote for Brexit has created a period of uncertainty for the UK economy, but the reaction this weekend from the self builders and renovators attending the Southern Homebuilding & Renovating Show at Sandown Park, is that they currently see no reason not to press on with plans that have been long in the making,” says Michael Holmes, spokesperson for the show.

“The Government remains very ambitious for the Custom and Self Build Sector. Completed homes increased by 6% across the UK in 2015 and the introduction of the Right to Build legislation in England is expected to boost this, as local authorities take on the legal duty to ensure there are sufficient serviced plots to meet demand.

“Government in England is expected to revise upwards its target of 20,000 homes a year by 2020. The Scottish Government is also reviewing its policy on the sector and the Right to Build legislation is in place for Wales should the Assembly vote to implement it.”