Like many good self build stories, this one starts with a eureka moment. For Darren and Lucy Henderson, theirs came while walking to the beach with their two young daughters and passing a small site that housed four derelict garages. The couple could see beyond this unloved brownfield site in Bournemouth: this, they felt, could be their next family home.

So they went ahead and bought the plot for £120,000, subject to planning permission — double what it was worth as a garage site, but far less than its potential suggested.

“We could have sold the site straightaway for thousands more but we wanted to live here. My office and the girls’ school is just down the road — the beach and pub are here, too,” says Darren, who’s a director at Dot Architecture. “What’s not to like?” 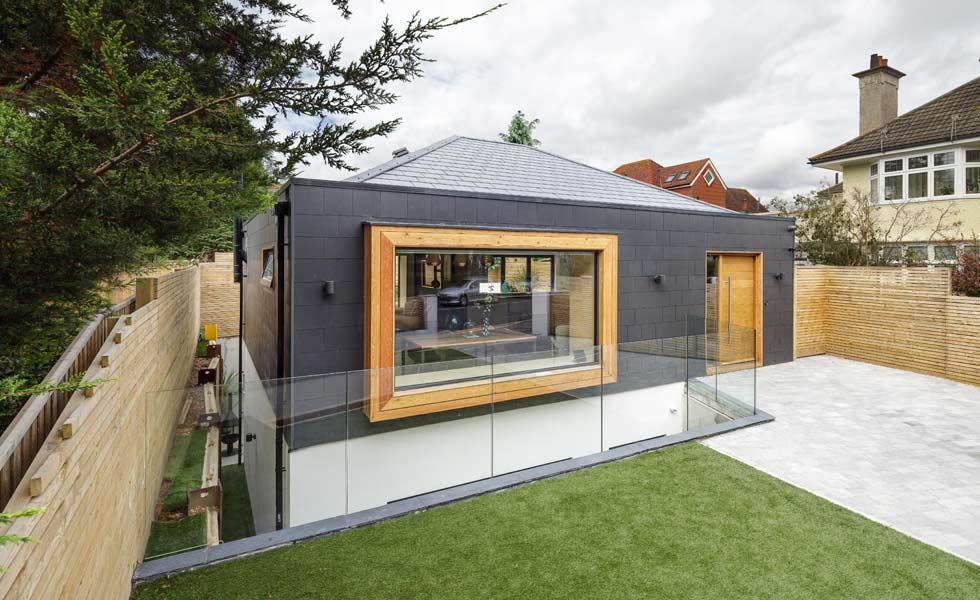 Not everyone could see their vision. The initial design, to create a two-storey contemporary home, was scuppered when a neighbour’s concerns about Right to Light meant that the planners insisted that the house was no higher than single storey. So rather than going up, Darren’s design went down — to a basement level (for sleeping) accessed via a central staircase and a living/kitchen space at ground level. 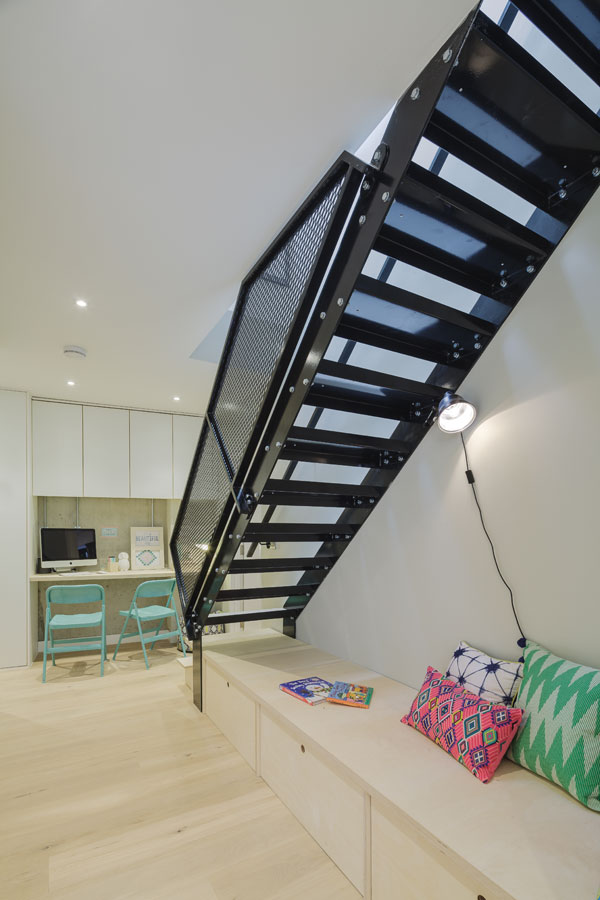 The industrial-style staircase sits in the middle of the floorplan. The bespoke staircase and balustrade cost £3,000

Going underground on a tight urban site is not for the faint-hearted. Basements invariably cost more than building above ground; here, the cost of excavating the ground and installing a basement was £120,000.

“I don’t think all sites are suitable for going underground. But this is a good spot because the local market can take it.” (The house is now valued at a healthy £650,000.) 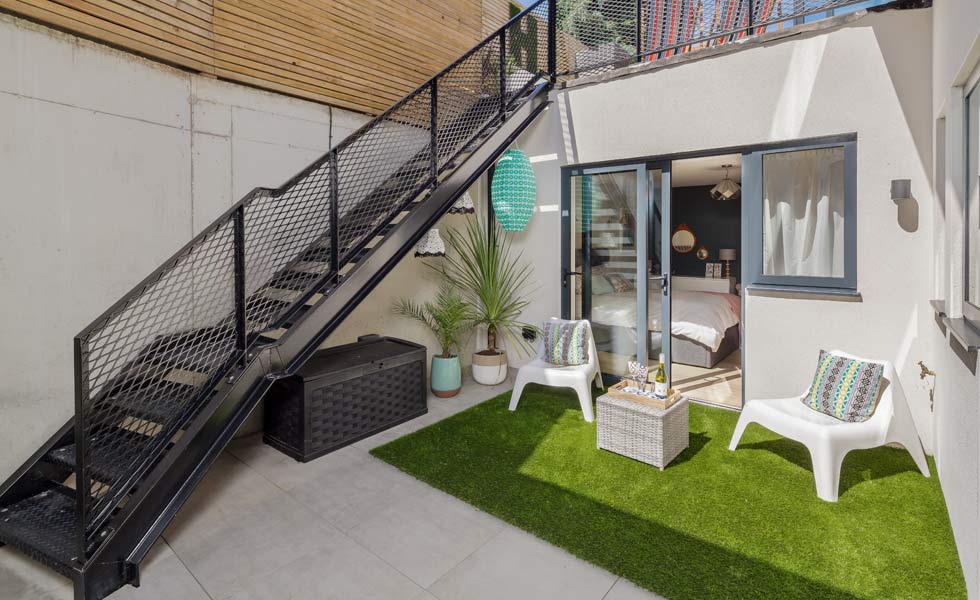 To build the basement, Darren opted for masonry and reinforced concrete using a king post system (a cost-effective construction method that involves drilling holes with a piling rig and then filling them with concrete and installing structural beams).

Choosing SIPs made the most of every millimetre on site, as they’re highly insulated but very slim — the walls are far thinner than they would have been with traditional brick and block. It also allowed the panels to be modelled and prefabricated before installation. 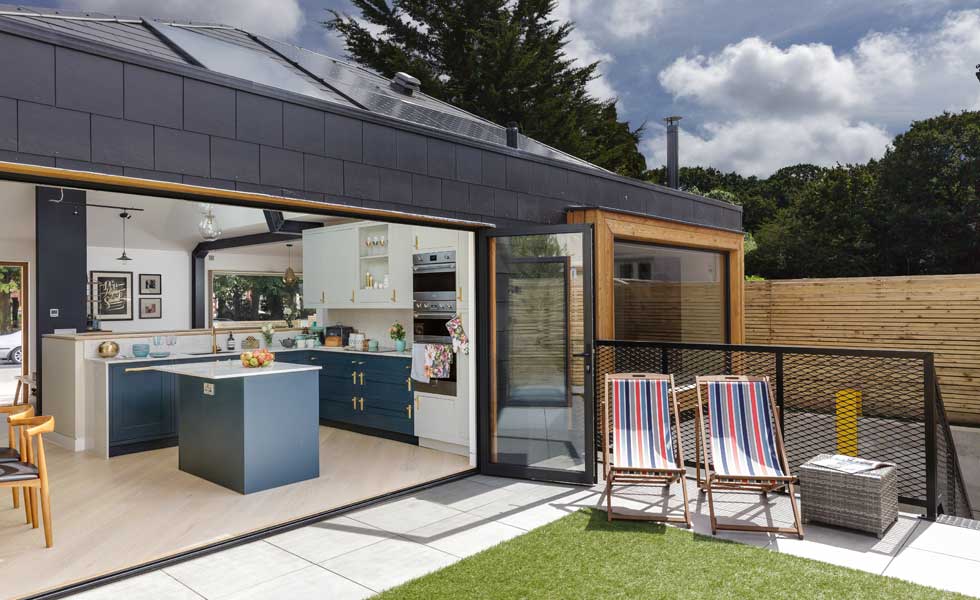 Clever design means that the family can access the exterior from every habitable room in the house. Bifold doors help to create an indoor outdoor space

That’s important, says Darren, because the exterior walls splay out towards the rear to make the most of the small site. “Very few of our walls fit the standard 90° angle, and that would have been a challenge for most builders constructing masonry walls on site,” he points out.

With neighbours on all sides, Darren and Lucy kept in regular contact with them during the build. “People don’t normally accept change well, but they’re far more accommodating when you talk to them and let them know what’s happening.

“When we carried out the piling for the basement’s retaining walls the vibrations could be felt in the vicinity of the site. I spent the day going from house to house to explain that there was nothing to worry about. The vibrations were only felt on the hour, and for about one minute at a time, but some people were concerned.” 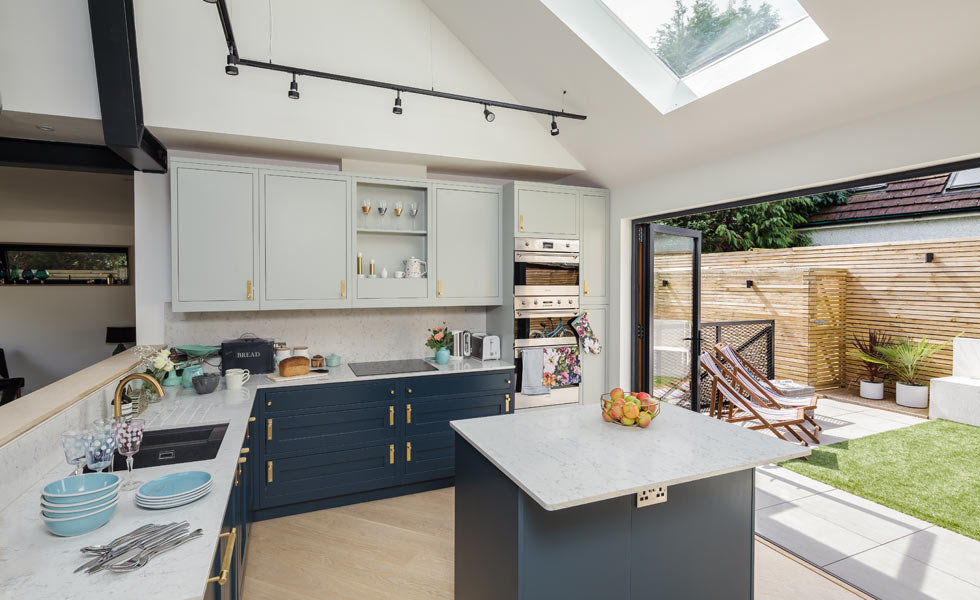 Designed by Lucy, an interior designer, the kitchen features in-frame cabinetry from 1909 Kitchens, with contemporary handles from Buet + Punch

It helped that building the 160m² bungalow was relatively quick. “It was amazing, especially considering the complexity of the excavating out,” remembers Lucy. “From clearing the garages to us moving in took about 10 months.” Bringing in materials onto the tiny site was tricky, though, both in terms of health and safety and logistics — the couple often craned in more materials than they needed, rather than risking the cost and hassle of a follow-up delivery. 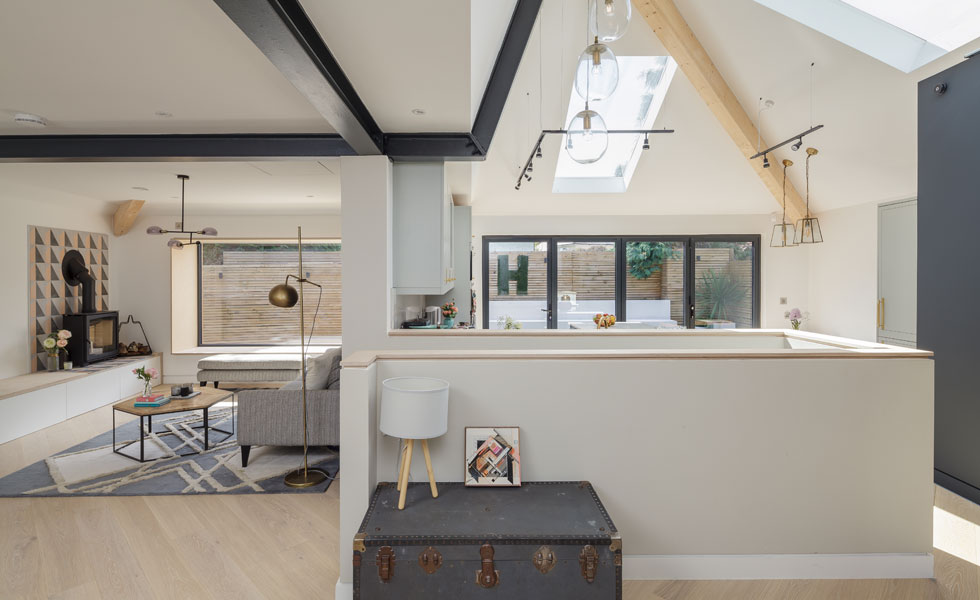 Structural glulam and steel beams provide visual interest to the interior. All of the beams are positioned underneath the SIPs panels to avoid breaking the integrity of the panels and the associated risk of cold-bridging

For the external materials, Darren and Lucy chose larch for the projecting picture windows and Marley Eternit Thrutone fibre cement slates for the roof and ground floor exterior. The latter offered the dark, smooth slate-like finish they were looking for, without the expense of natural slate.

Below ground, white K Rend provides a visual contrast to the slates above. “We thought about using the same dark slates here but wanted this area to be light, and we didn’t want people to feel that they were in a basement,” explains Darren. 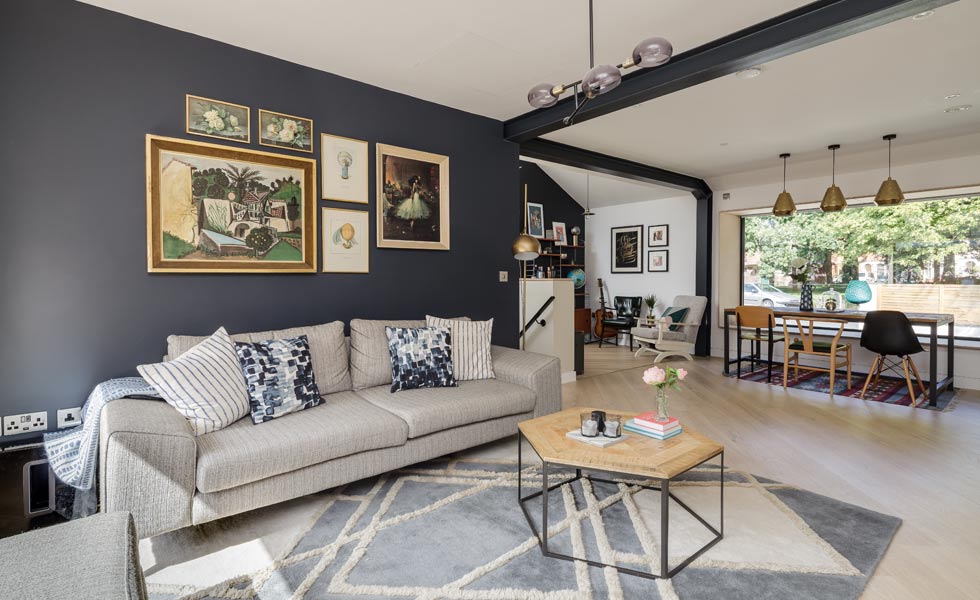 The living room is partially separated from the rest of the ground floor to create a more private family space. A large picture window forms a comfortable window seat overlooking the tree-lined street

Internally, some concrete walls have been left exposed to tell the story of the house’s construction. Other walls are plastered and painted, with the colours (Railings, Studio Green and Shadow White all from Farrow & Ball) chosen by interior designer Lucy to mirror the exterior palette.

The light-filled house is also highly energy efficient, with PV solar panels on the roof, a mechanical ventilation with heat recovery (MVHR) system and, of course, those insulated and airtight SIPs panels.

And how does it feel to live in this mix of subterranean and above ground spaces? “We love the house so much, and we love the location,” says Darren. “The courtyard gardens are well used and incredibly light despite being ‘underground’. I get an itch to move onto the next project, but I feel settled here now, and that speaks volumes!”

(MORE: Self Build: The Complete Guide)