Tim and Suzy Powell had been regular visitors to Rock in Cornwall for some time, so when a friend, who also happened to be a local estate agent, told them about a 1960s bungalow that had come up for sale in the area, they didn’t hesitate to put in an offer. “When Alex called about the bungalow he said it was a really rare opportunity — and he was right,” begins Tim.

The bungalow in question stood some 200 yards away from the adjoining working farm it once belonged to, with the site gently sloping away to the south and affording panoramic views of the River Camel and of Rock and Padstow beyond. 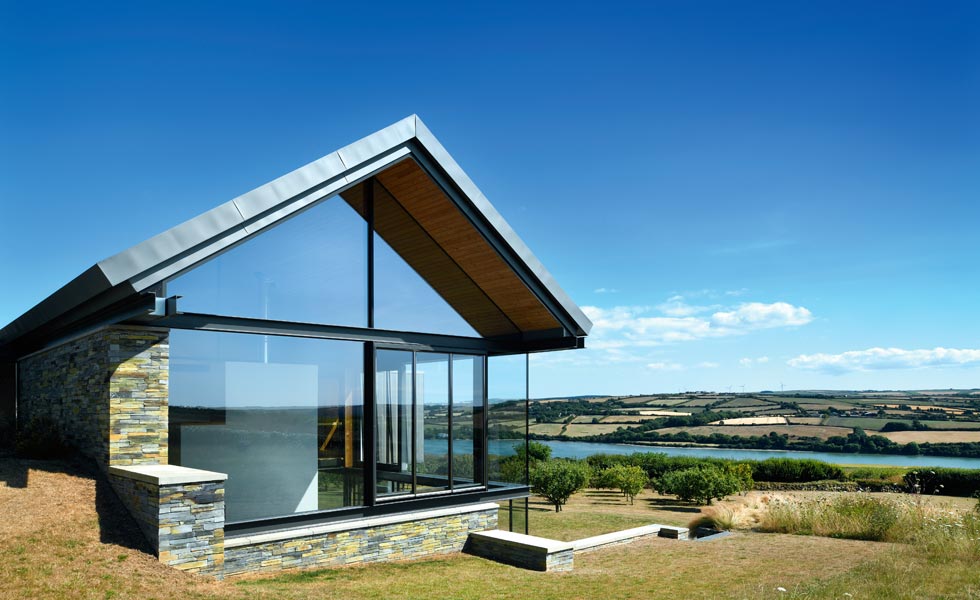 “We owned the bungalow for over a year before doing anything to it,” says Tim. “We needed to spend time thinking about what we wanted. We actually got quite fond of it as it was.”

Tim and Suzy were familiar with, and liked the style of, Devon-based architect Stan Bolt. Although the farmer who owned the bungalow already had outline planning permission for a new dwelling, Tim and Suzy re-applied for a different design.

“We knew the size of the house we wanted and the feeling we wanted to create. We wanted a house that would be big enough for the whole family but intimate enough for just the two of us,” says Tim. “We were also keen on using plenty of natural materials and glass and wanted a design that would be sensitive to the farm buildings next door. Beyond that we just said to Stan, ‘over to you!’ 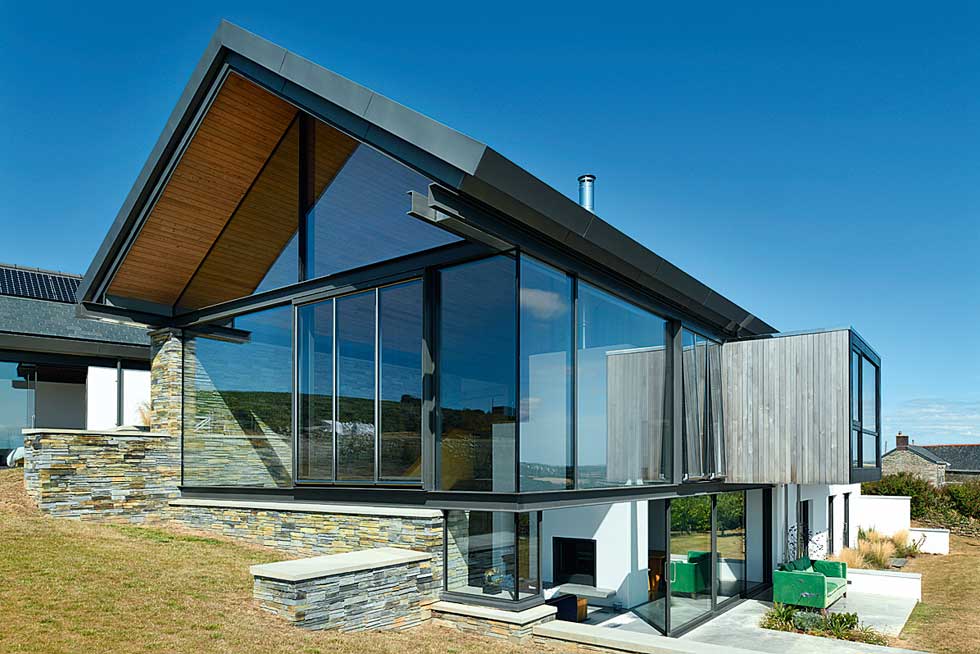 The pitched roofs were designed to fit in with the surrounding landscape. The rear spaces are designed to be open to the elements while those at the front are more intimate

“Stan came to us with the idea of these two ‘units’ connected by a floating roof,” says Tim. “It wasn’t what we expected — but we loved it.”

“The context of the site seemed to call for a traditional pitched roof and simple, agricultural forms — my design majors on that,” says Stan. “But I also wanted to create something a bit exciting.”

Exciting is a word that hardly does the new house justice. The house has been designed as two pitched roof sections — one aligning the northern boundary and the other, at a slight angle, immediately to the south. The V-shaped space in between houses a bridge connecting the upper ground floor spaces above the double-height kitchen, and beyond this a subterranean snug below a green roof. 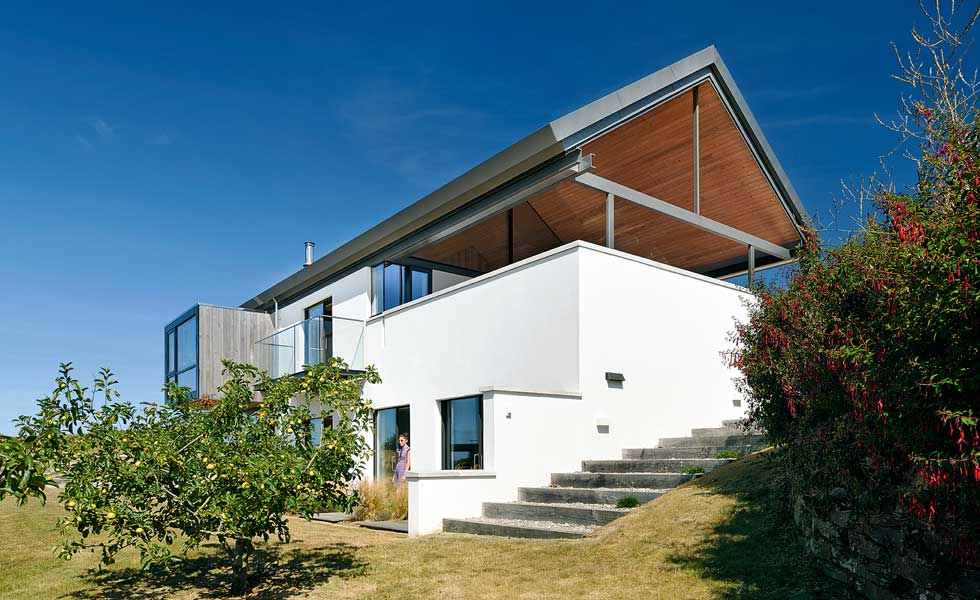 The void beneath the open pitch is for the carport

The north, single-storey wing is just visible from the road where it nestles inconspicuously into its rural site, with the two visible fully glazed gables giving the faintest hint to what might lie within.

“The roofs are conceived as folded plains forming umbrella structures which marry together all the open spaces and more introvert ‘boxes’ that form the house,” explains Stan. “The roofs sit on a continuous, visually exposed, open steel ring beam (like a ‘picture frame’ laid horizontally) which, in tandem with frameless fully glazed gables and internal screens within the roof space, give the appearance of ‘floating’ and complete transparency throughout the lengths of the buildings. 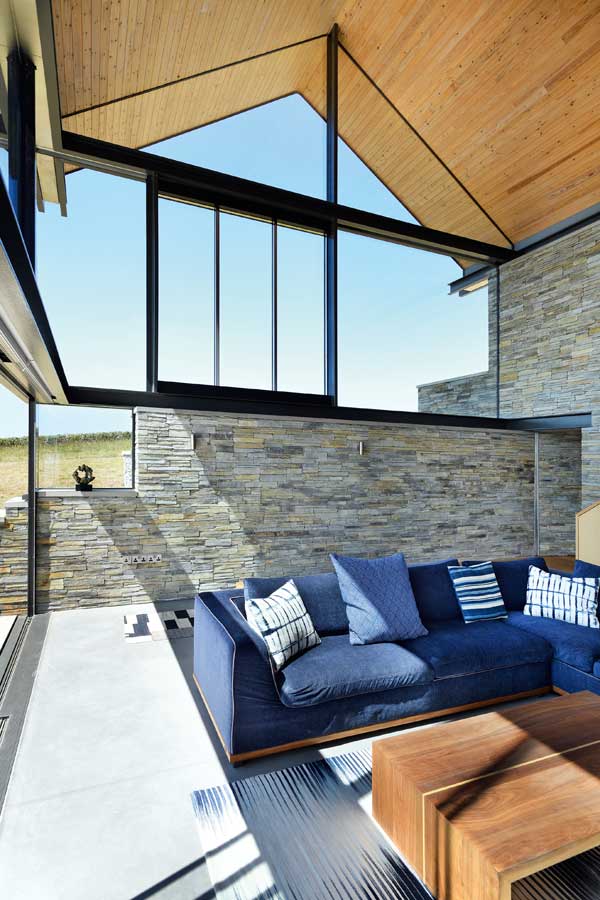 The roof appears to float above the living space thanks to the steel ring beam that supports it. Windows are made up of a selection of sizes and shapes — some are rooflights fitted vertically

“The overall impression is that the house comprises simply an enclosed portion of the external environment — a real erosion of the distinction between inside and out allowing the surrounding vistas to be enjoyed in their entirety and each space to be bursting with natural light.

“The Cornish slate wall that runs along to the west side of the entrance courtyard comes in through the front door, into the hallway and then becomes a wall that spans two storeys as you descend the staircase into the double-height living space, before finally leading you out on to the terrace to the rear,” says Stan. “It is like this tendril that runs through and out of the building. 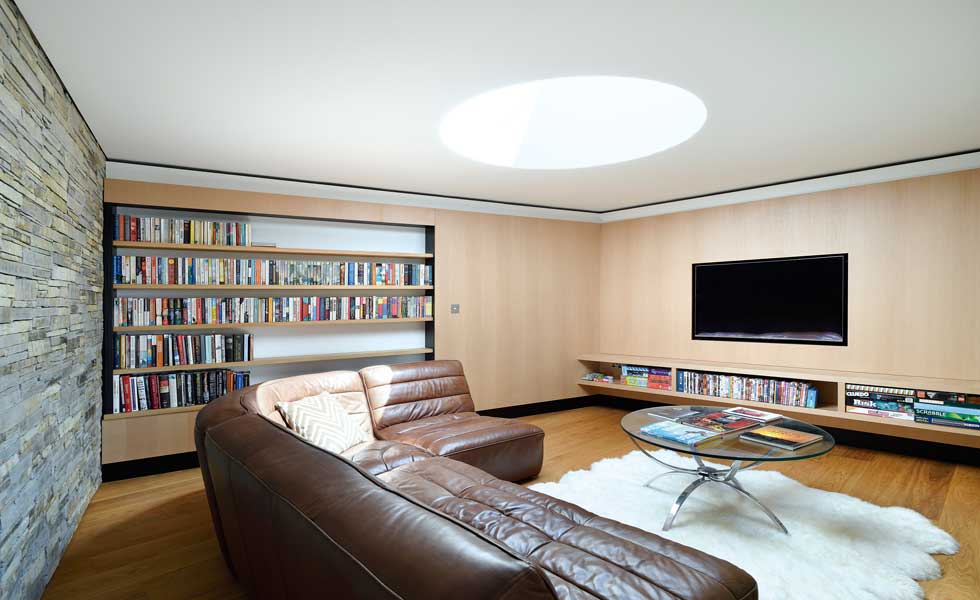 The snug is a ‘secret’ subterranean space with a circular rooflight

“We were trying to give the building a rooted, robust feeling — like a 21st-century farmhouse.” On the upper ground floor of the two wings lies the entrance hall, utility, a guest bedroom with en suite and a study with views that Tim describes as ‘distracting’. On the lower ground floor of the south wing are the ‘public’ spaces, such as the living and dining spaces, along with the double-height kitchen, overlooked by a gallery from the floor above. 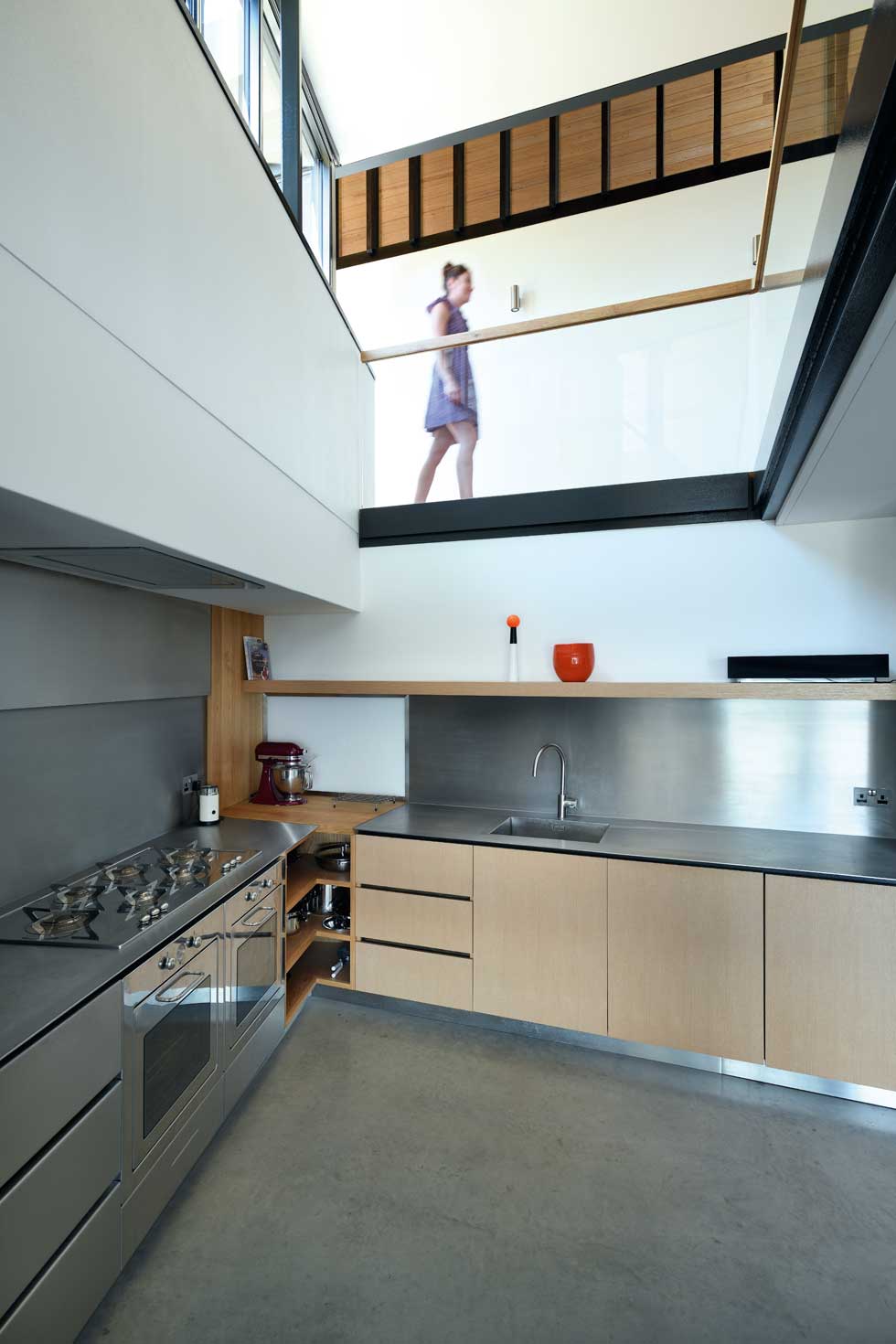 Tim and Suzy were keen for the kitchen to be at the centre of the house without it imposing on the open-plan spaces. Light pours into the room from the hallway above

Internally the house has a simple backdrop of raw materials, including European redwood-clad ceilings and polished concrete floors, yet behind the seeming simplicity are some complex design methods.

“There are lots of little games going on in the house,” says Stan. “Under the guise of simplicity there are all these secret rooms and tricks. The house is more complex than first impressions imply.” 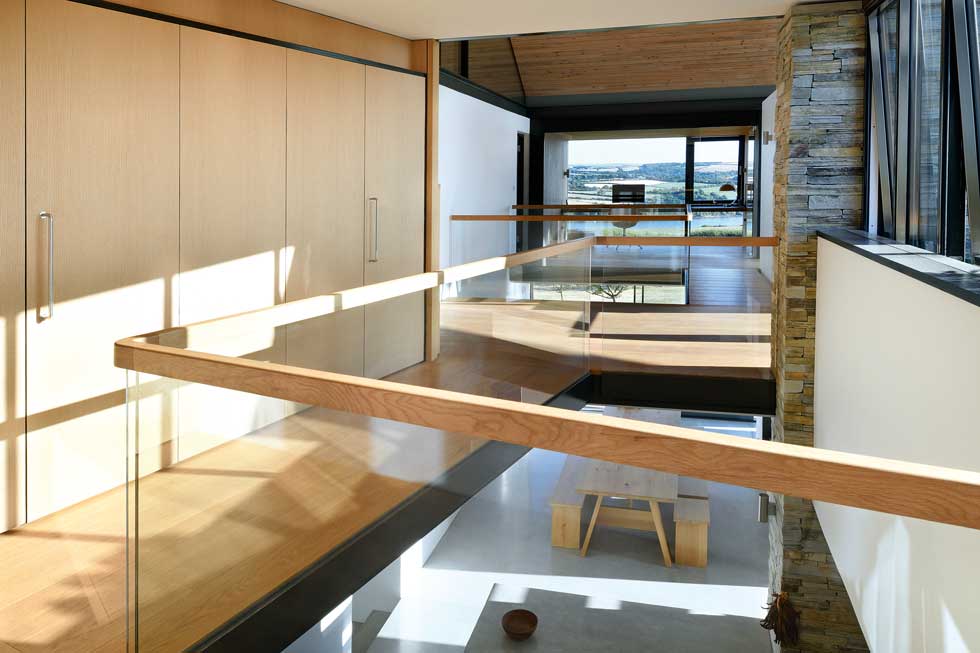 On entering the house, visitors are greeted by throughviews out of the study into the projecting bay

The house is made up of a combination of horizontally and vertically open spaces, such as the soaring living space that spills out to the rear terrace through an expanse of glazing, and private spaces, such as the snug, which only gives away its existence through a circular rooflight nestling within the green roof that covers it. 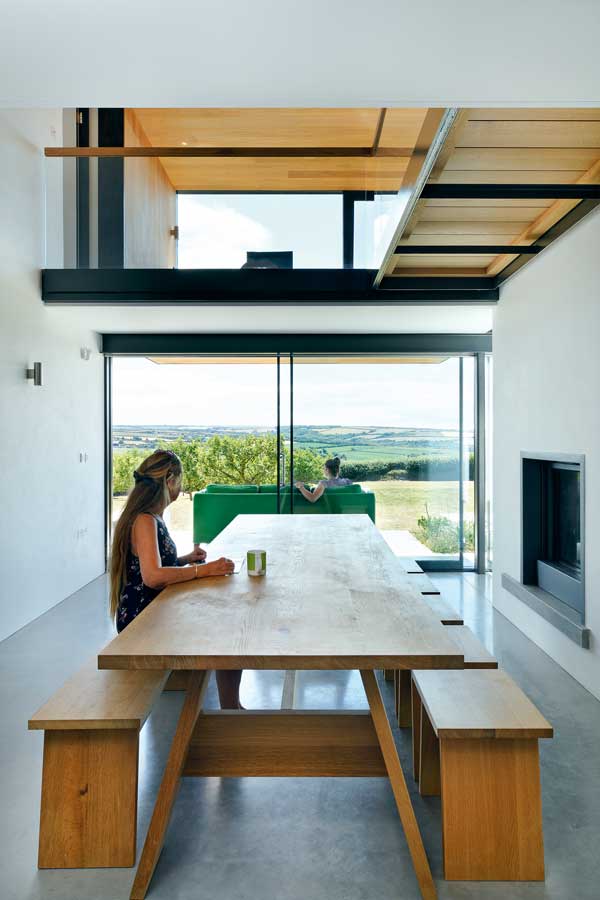 “The snug is my favourite space,” says Tim. “It is completely different to the open-plan areas of the house and, as its name suggests, feels very snug.” The house also features PV panels and an air source heat pump to drive the underfloor heating, along with super high levels of insulation — heating bills come to only a third of that of their Victorian house.

“Explaining your design to clients standing in front of just a muddy field can be tough,” says Stan. “But Tim and Suzy were wonderful clients.”

“We love it here — the house just works so incredibly well,” says Tim. “We continually have these ‘wow’ moments. It makes the very most of its exposed setting. Ordinarily you could feel a bit miserable on a stormy grey day, but not here — the dramatic landscape is just another part of the house.” 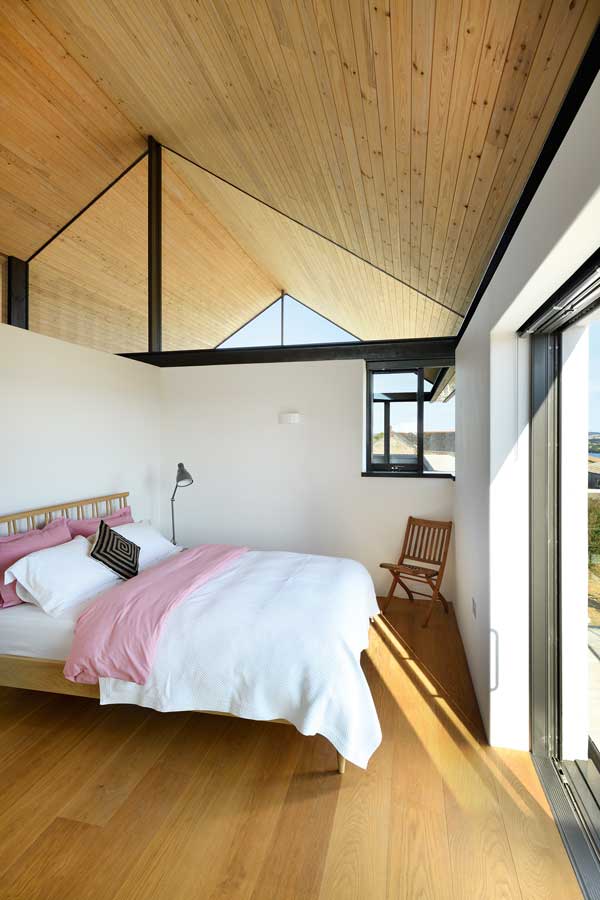 Three bedrooms are accommodated on the lower ground floor of the southern wing, each with access to a terrace. A guest suite has been included on the upper ground floor, while the master bedroom with its en suite is located separately in the northern wing