Alan and Lucy Brown’s new self-built family home, just off the Fife coastal path with spectacular views of the Forth Bridges in Scotland, emerged out of a design and build journey involving a wee bit of serendipity and luck at the outset and a huge amount of personal commitment throughout the duration of the build (which was documented for Channel 4’s Building the Dream).

The result is the Glasshouse, a contemporary, light-filled villa that the Browns emphatically describe as their “forever family home”.

The couple, who have both lived in the Dalgety Bay area for most of their lives, spotted a 0.3-acre plot overlooking the River Forth quite by chance a few years ago.

“We were out walking the dog one day and saw that this gap site was for sale. We saw it on the Saturday, called the seller on the Monday and put in our bid the following Wednesday, which was the closing date,” they explain. 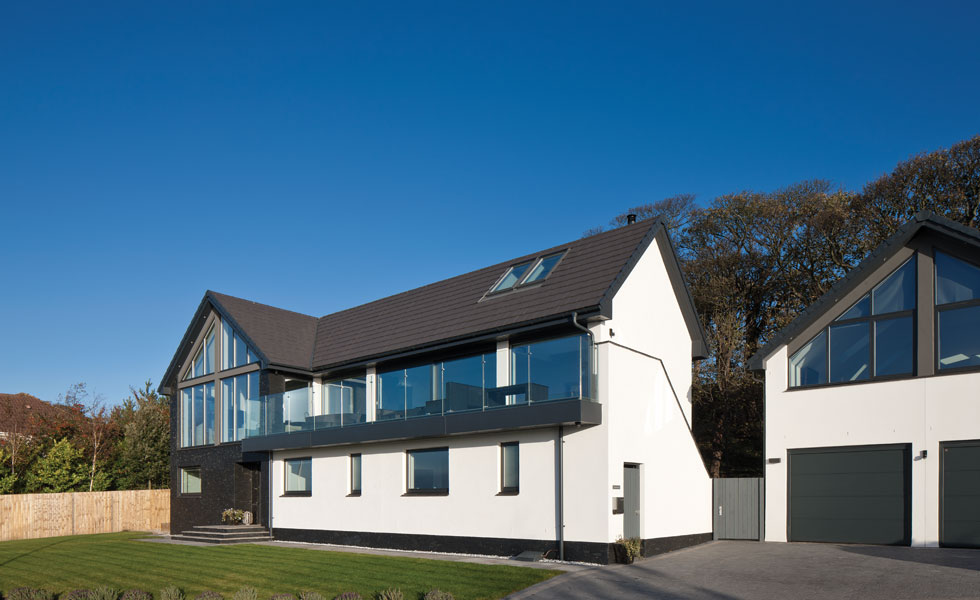 Silicone render and slate have been used to clad the house. A large detached double garage sits next to the house and features guest accommodation, The Wee Glasshouse

The couple approached Dundee-based architects Andrew Black Design to help them create a design and to help them navigate their way through planning.

“We had a wishlist — the main thing being that every room would have a view,” says Alan. “Initially the architect came back with some designs for a three-storey house, which the planners were happy with. Internally it was great but we decided to go back to the drawing board to create a more streamlined external design. We eventually settled on a much simpler plan for a two-storey house. The planning department was very supportive.” 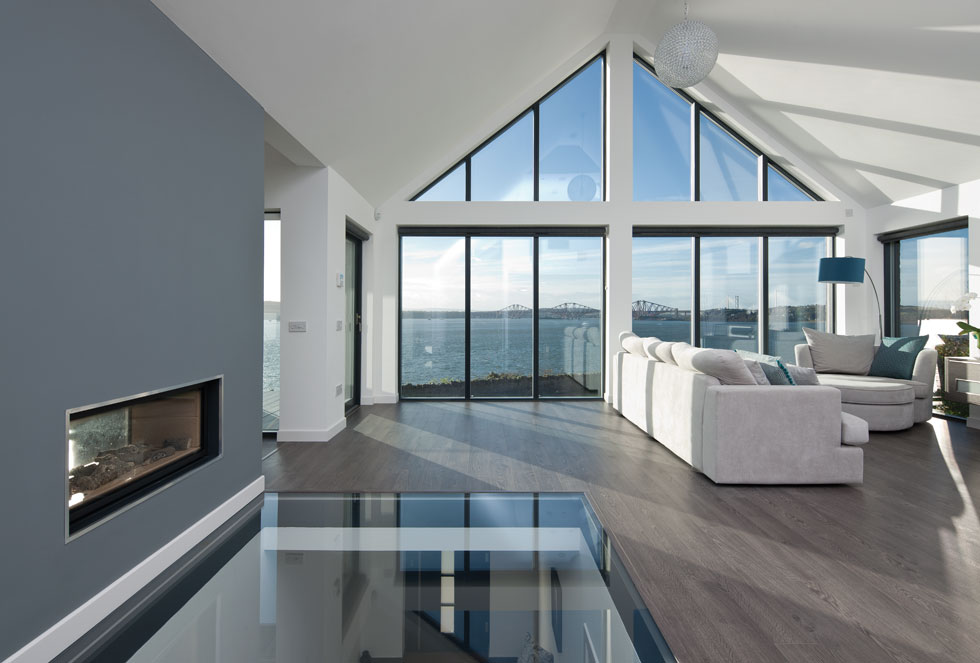 The project began on site in April 2015, with friend Marc Hendry of Dalgety Joiners working with Alan and Lucy as main contractor. “We had to sell our house to release the equity to take on the build, and during the project we moved in with my mother-in-law and father-in-law who live nearby,” says Alan.

“I was on site every day and shared the project management with Marc,” explains Alan. “Marc took the responsibility of the build and subcontracting many of the trades. I did a lot of research into the technical side of things such as the mechanical ventilation with heat recovery system and all the lighting, as well as sourcing all the windows and flooring. 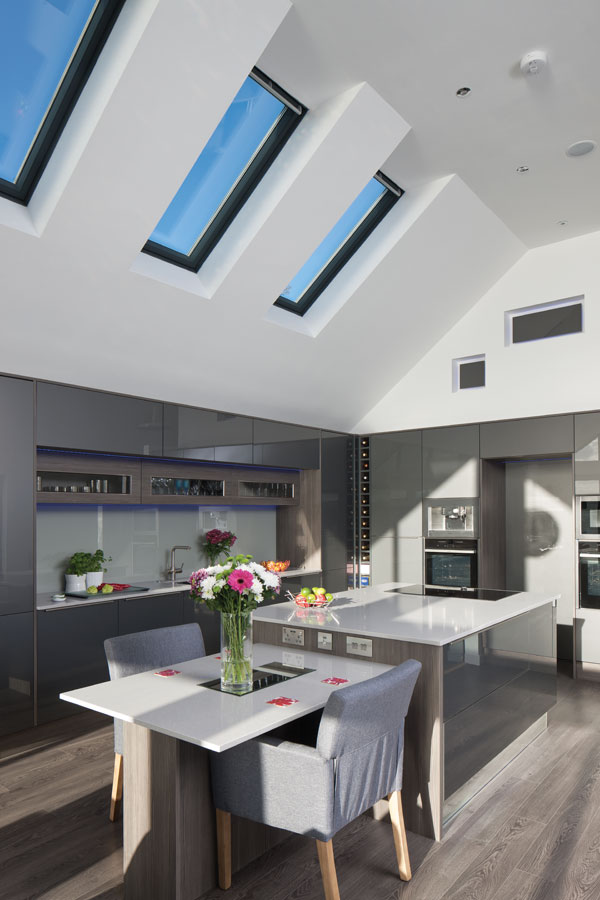 TMS designed the bespoke kitchen in collaboration with Alan and Lucy. The kitchen island provides an informal spot to dine

“I’d choose the products and Marc would let me know how much was left in the budget — we would discuss every last detail. I’d walk around and just look at what was going on, which meant that I could pick up anything, and make any changes there and then.”

And Alan admits that there were a few tweaks made to the timber-framed house during the build, including the placement of some of the windows, and creating additional accommodation in the first floor kitchen area.

“It’s built in timber frame but there was no timber kit company involved. Every panel was built on site. This allowed us to make important changes along the way,” explains Alan. 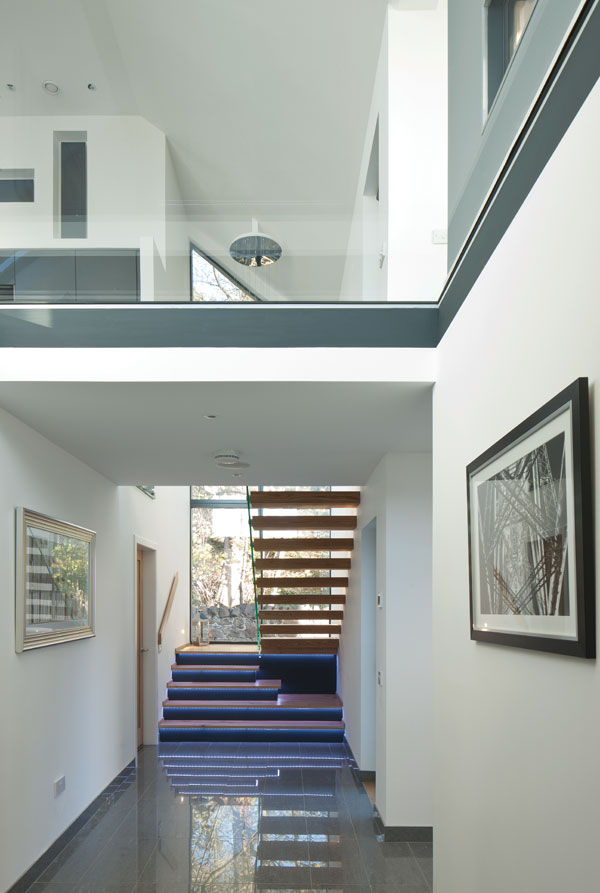 The glass floor introduces light deep into the floorplan. It is triple layer, 38mm thick and can withstand a tonnes and a half of weight

Following the highly collaborative build, the Glasshouse finally emerged as a two-storey villa featuring slate cladding and Wetherby silicone render finishes, designed to withstand the coastal elements. Marley Edgemere tiles were chosen for the hard-wearing roof, with the same tiles also being used for the sills, which creates a continuity across the external design. 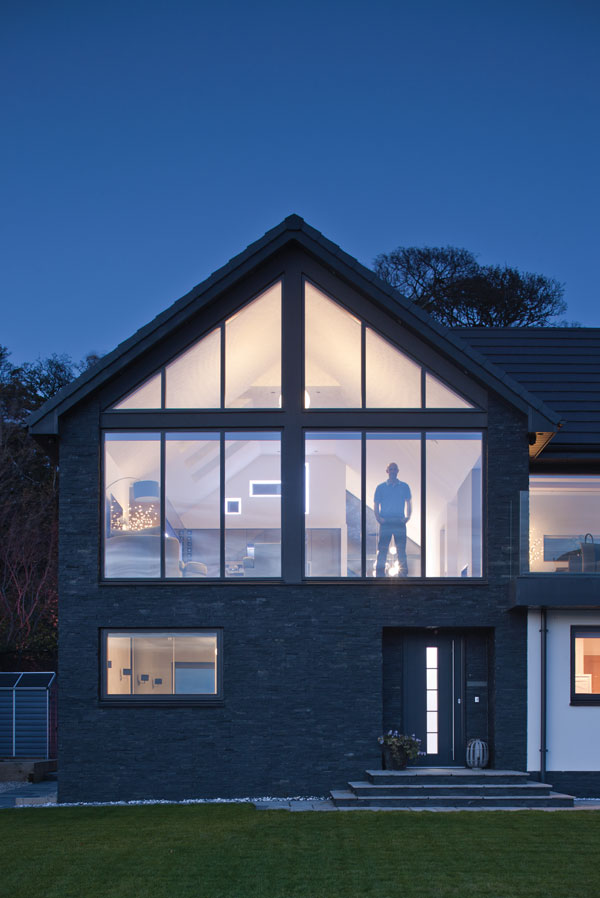 The property has an upside down layout to make the most of the surrounding views, with bedrooms on the ground floor and living spaces on the first floor

“The budget grew from £370,000 to £470,000 due to ‘up-speccing’ to make the house exactly what we wanted and top quality. This included landscaping, The Wee Glasshouse (accommodation above the detached garage which we are currently renting out as a guesthouse), electrics, technology, kitchen, bathrooms, flooring, Velux features and more. All these additions were worth it as it’s a forever family home that won’t be sold. We always had it in mind that the extra we were spending wouldn’t put us in negative equity. In any event the house was valued at £1million on completion,” concludes Alan.

“We really stretched ourselves with this build but when we got to the end of the project I can honestly say we said we wouldn’t change a thing.” 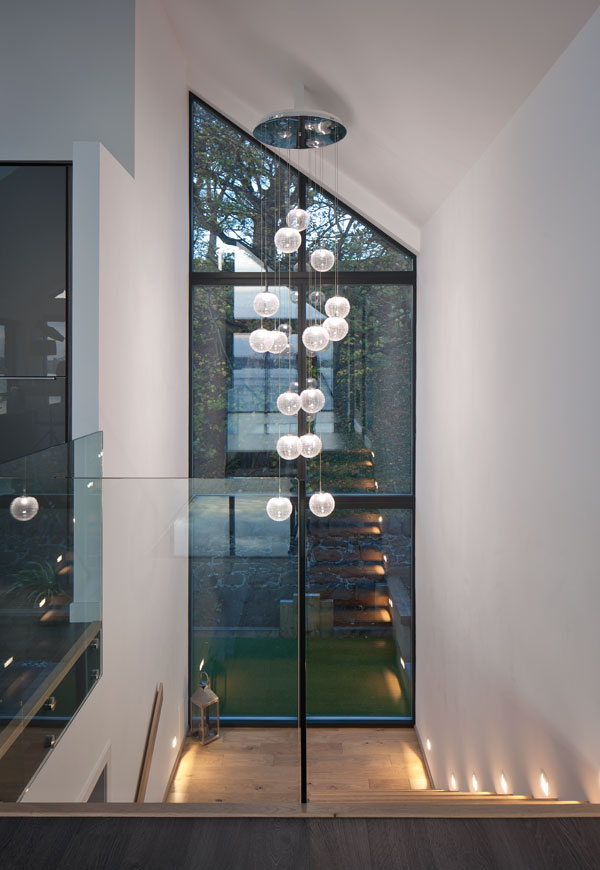 The double-height hallway, with its large chandelier and vast amounts of glazing is a wow-factor space within this new home. The chandelier was sourced on Ebay for around £320

Making Changes Along the Way

The Browns’ home was stick built, meaning the timber frame was constructed on site, allowing the couple to make changes during the build. “Building every panel on site means you can then make changes as you go along — for example, window positions, door positions and electrical positioning,” begins Alan. 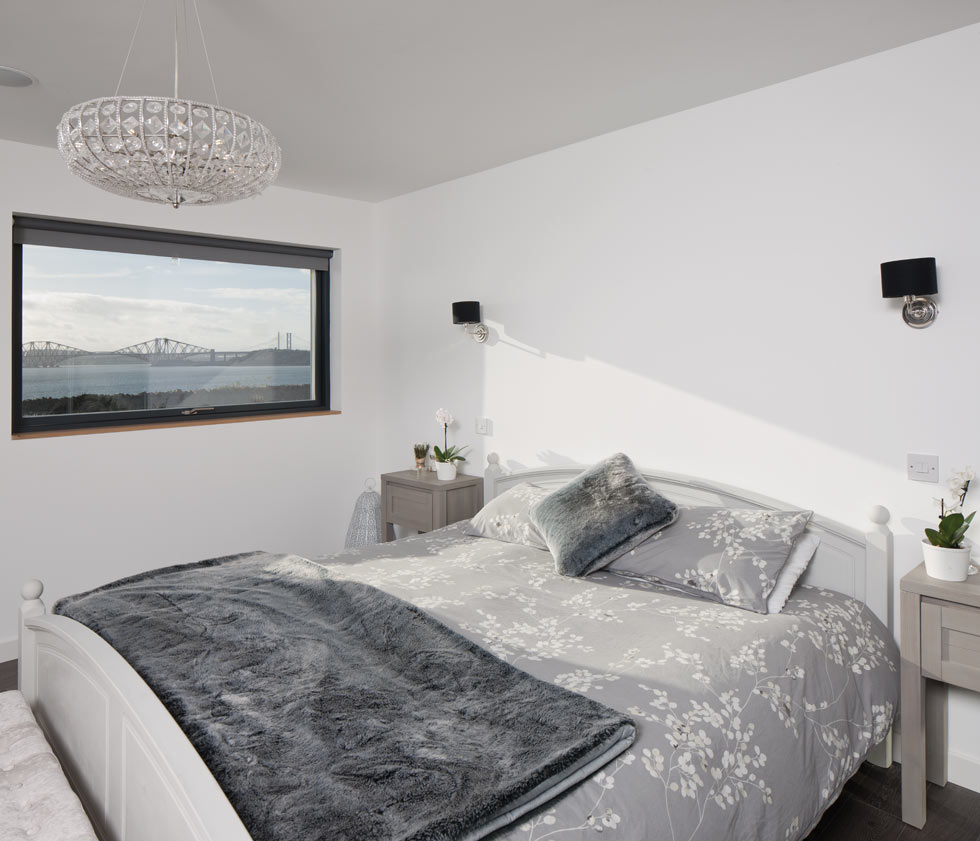 “We made quite a few changes during the build, which has added to the success of the building. It’s only possible to get the real impression of the positioning and views from many of the windows by standing on the site as the building progresses,” he says.

“Originally we designed the whole upstairs area as completely open plan; there was no separating wall in the middle. However, when we put the mechanical ventilation with heat recovery system in we needed to house the workings of it. So we then had this idea that we would like a two-sided fireplace between the kitchen and dining/lounge area. 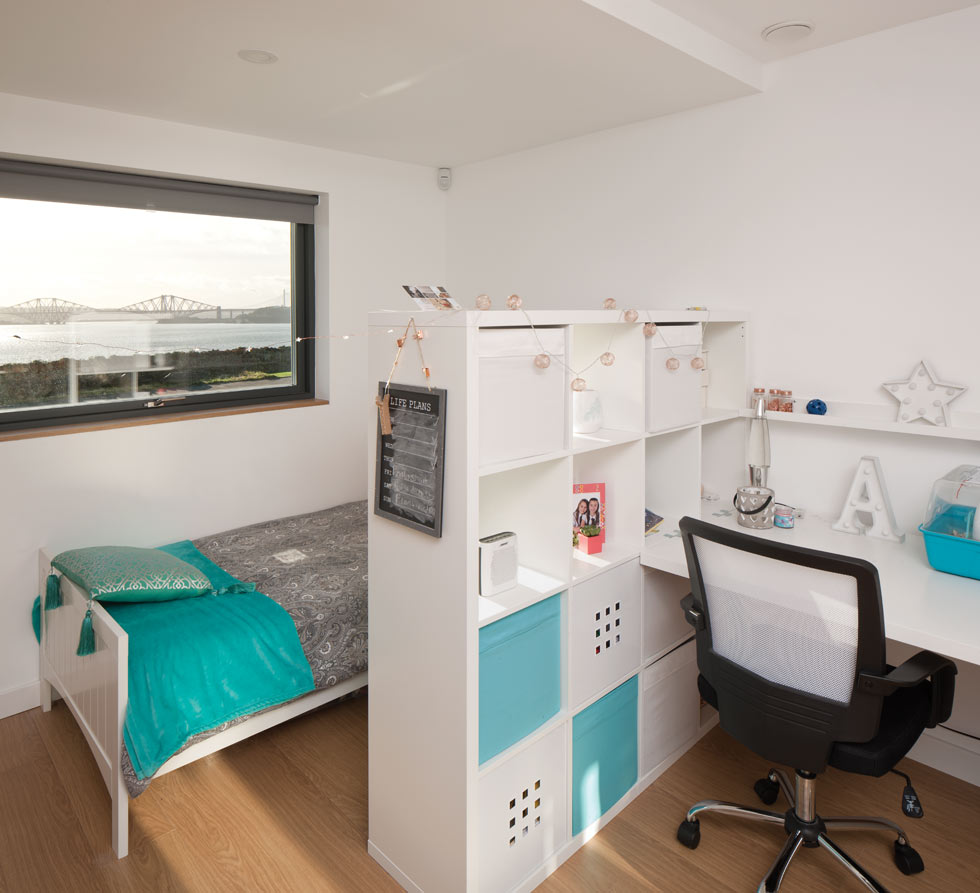 The children’s bedrooms have a Jack and Jill set up, sharing an en suite that is located between the two

So during the build we created the partition wall, which has two uses: to split up the kitchen and dining/lounge area but also to house the mechanics of the building.

“We also extended the kitchen during the build. We thought ‘let’s make a hidden door with the same material used in the kitchen’. So we got a standard door and glued the material to it. Behind the door we created a loft space and a WC and also a walk-in larder. This was to have been a walkway originally.” 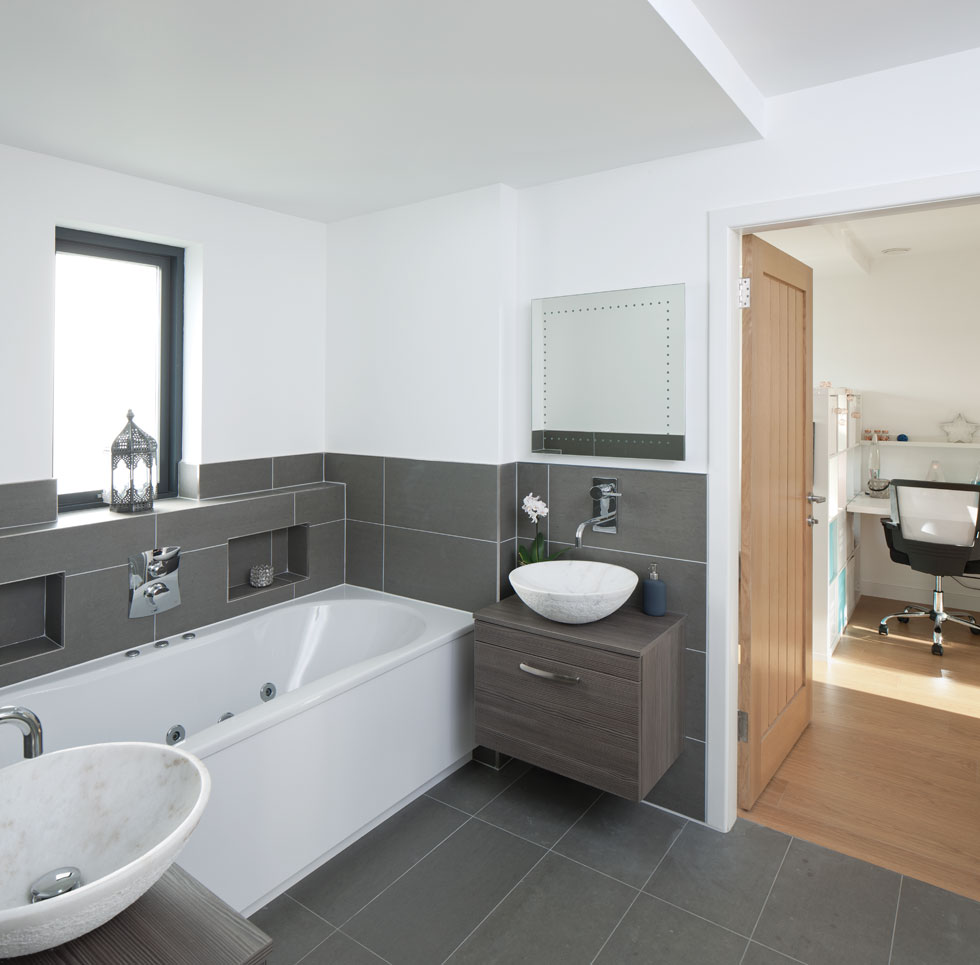