Clerestory windows are quite widely used by architects and designers producing individual homes for self-builders. Despite this, many aspiring selfbuilders do not even know what they are! A dictionary of architecture will tell you that a clerestory is a means of bringing light into a building from an upper level by adding a complete storey. However, ask any architect specialising in contemporary houses and he or she will describe it as ‘high-level glazing’.

Glazing of this sort was widely used in Arts & Crafts designs to give a ‘horizontal’ feel to the building just below eaves level on the first floor. It emphasised steeply pitched roofs. As the Arts & Crafts style gave way to Modernism – with its love of flat roofs – the device did not go away. Instead it was used as a means of creating ‘floating roofs’. This look remains popular in contemporary designs to this day.

How to say it…
In case you were wondering, it’s pronounced Clear-story rather than Clair-est-ory 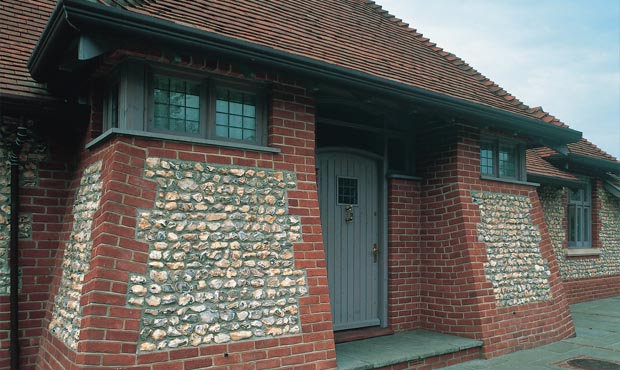 ABOVE: Clerestory – or high-level – windows don’t have to be the preserve of homes of a contemporary design. They were, in fact, traditional on many Arts & Crafts homes — as in this new build

Floating roofs are generally flat roofs that appear as though they are detached from any means of support. A band of light appears to pass between them and the structure of the house. This light has a different quality from the light that enters through full-height windows. It penetrates deeper into the building, giving a pleasant, diffused light in the shadows created round the sides of rooms. So clerestory windows are an ideal means of getting light into a house with a deep plan, which many single storey contemporary houses possess.

Clerestory windows can also be particularly useful on the ground floor of a single storey house built on a sloping site as a means of importing light to the rear. The technique is also used for lighting a basement in a house built on a slope. Additionally it is a useful device when the self-builder wants wall space that is unbroken and unencumbered on the inside. Very often this is so that the wall can be used for displaying pictures or perhaps for bookshelves.

Clerestories can also come into their own on occasions when planners effectively dictate the position of windows. If a ground-level picture window is not permitted – usually because of overlooking – high-level glazing of this sort is often a way around. The situation also works in reverse: clerestory glazing is a useful tool if you feel your site is overlooked and people will be able to see in from the outside too easily.

Another similar use is when your self-build or new extension is overlooked on one side by an ugly wall or other feature belonging to the adjoining house that is very close. In this instance clerestory glazing will provide an interesting light at a high level. The narrow size of the window will mean that the ugly feature can hardly be seen.

Clerestory windows can be used to good effect on single storey houses when there is a projection outside the building. Sometimes this takes the form of a corridor, used to get from the front to the rear of a long, thin single storey house. A clerestory above can help counter the effect of the corridor in reducing the amount of light entering the house.

On first floors, clerestories are frequently tucked under the roof at the head of a staircase. It is a popular device with architects who feel – as many do – that staircases often end up depending on artificial light and that, properly lit, they become much more of a feature. Many architects like to tuck an upstairs clerestory under the eaves. In this way you have no external wall structure above that has to be supported by the window frame.

ABOVE: (left) Michael Winter’s award-winning house in Tunbridge Wells incorporates clerestory windows into the splitsection roof, throwing light in from above; (right) Even this bank of lights in a converted barn follows the clerestory principles to good effect.

There is a further form of clerestory window, which architects often refer to as a ‘split-section’ roof. In reality it is two overlapping monopitches. They can be at the same pitch, or as in the house owned by architect Michael Winter (01892 539709) and his wife Elizabeth, at different pitches. Michael, whose house on the edge of Tunbridge Wells in Kent has been much written about, uses the split-level roof for two purposes. It both helps throw light coming in at a high level from the south right into the rear north side of the building, and it also helps pull solar heat into the house. The dual-pitch roof in which the steeper pitch to the north – it is 22.5° – over-sails the 17.5° pitch to the south, is designed to give solar shading to avoid overheating in the summer. At the same time it is a successful means of gaining solar heat in the winter when the sun is lower in the sky.

In this way the clerestory performs a vital function of helping to heat the house, which has minimal heating, as well as being an attractive architectural feature. It also introduces a very pleasant form of high-level diffused light that has a very striking effect as it disperses and bounces off the two sloping ceilings.

The Advantages of Clerestory Windows