Although it is still easily the dominant construction method for UK self build projects (the exception being Scotland), blockwork has for years suffered in comparison to the energy-efficient, fast-on-site message of timber framing. If you wanted to build a modern, energy-efficient, airtight house, then blockwork lagged down the list of choices, with timber frame promoting itself successfully on these key points.

But, as with most things, the situation deserves a second look, and a little investigation shows that the blockwork industry has been busy innovating to help it meet the changing needs of 21st century homebuilders. 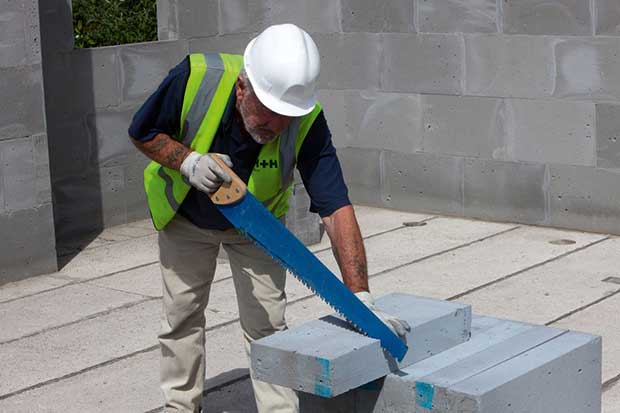 Aircrete blocks such as these from Celcon can be easily sawn

A product that was considered innovative when it appeared in the UK some 50 years ago, aerated concrete (aka aircrete) actually has a long history that goes back almost 100 years to Scandinavia where it was invented in the mid-1920s.

It is manufactured from pulverised fuel ash – a waste material from coal-fired power stations – sand, cement, lime and water, with the addition of a small amount of aluminium powder to create the chemical reaction that causes the tiny bubbles to form in the mix to give the product its familiar internal structure. Of its content, 80 percent is recycled. Large slabs of the material are formed in the factory, which are wire-cut to the required size and then steam-heated under high pressure to give the finished product.

Concrete is claimed to be the most widely used manmade substance on earth and the aircrete block is now a mainstay of the UK housebuilding industry, including many self builders. The inherent thermal insulating properties of aircrete blocks have placed them in a good position to meet the ever-tightening thermal and airtightness requirements set out in UK Building Regulations.

Manufacturers have continued product development, including larger block sizes — up to 2.5 times the size of a standard block in the case of H+H Celcon’s Multi Plates. Other developments include special blocks which replace cavity wall and concrete infill or engineering brick details for foundations, for example the Thermalite Trenchblock Tongue and Groove. Coursing units for use around openings to avoid the need to use bricks or other dissimilar materials to make up differences in courses (and possibly, in doing so, compromising thermal performance) are available too.

The use of solid-wall aircrete construction with no cavity and with insulation applied externally, is also gaining ground in the UK with some self-builders and the trade. 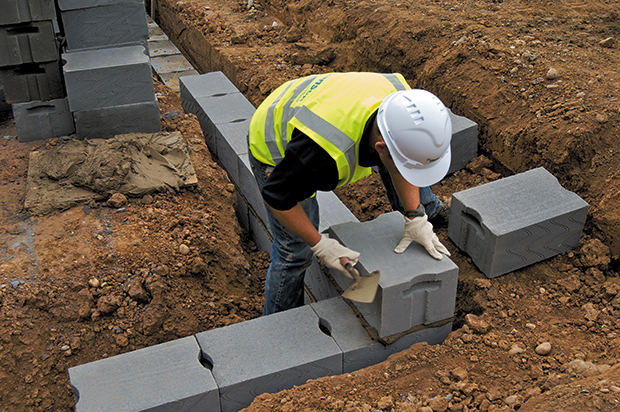 Another aspect of an aircrete approach is thermal mass, which manufacturers claim is a benefit both in summer and winter. The higher average temperatures we are experiencing more often make summer overheating a problem; it’s even a requirement of Building Regulations Approved Document L that the designer must take the possibility of overheating into consideration.

Thermal mass is recognised as one means of reducing this effect, however. In masonry homes, especially with concrete floors, the blocks can absorb heat in the daytime and release this stored heat into the living space overnight.

Aircrete suppliers also claim thermal mass has a beneficial effect on the heating pattern in winter time. By offering good thermal insulation and thermal inertia, they suggest aircrete can help to reduce extremes in the internal temperature within the building and keep it at a more consistent, comfortable level.

In the AIMC4 project, trial sites were built incorporating a number of methods of house construction with the process monitored by the Building Research Establishment (BRE). The project looked to develop new design approaches and build processes that will drive innovation in the existing supply chain and stimulate the emergence of new suppliers and partnerships — adopting what is known as a fabric first approach.

This was intended to show that by giving careful attention to the choice of materials and key construction details, as well as insulation, airtightness and indoor air quality, it is possible to build very low carbon houses without the need to incorporate renewable technologies. Aircrete has been used in some of these homes and a resulting BRE report points out the ease of use, speed of installation, short lead times due to existing established supply chains, and improved airtightness.

Wall U values as low as 0.15 and airtightness levels of 4 were also achieved. Good airtightness on sites is very much down to the skill of the contractor, or self-builder who can also ensure that airtightness tests are not compromised by extraneous gaps, including air paths via data cabling, electrical, TV or satellite cabling or ventilation ducting that may go into a ventilated loft area.

Thin-joint technology is a key element in the aircrete AIMC4 exemplars. In a traditionally built aircrete wall with a standard mortar course, the mortar is much more thermally conductive than the blockwork. If you multiply the course thickness by the number of courses in a typical two storey house, that can add up to a sizeable element.

Thin-joint technology seeks to reduce such potential heat losses by using a special adhesive instead of mortar that is pre-packaged and mixed on site with water. It is applied using a special tool that enables it to be spread on the block unit at the correct thickness of just 2-3mm, depending on the system.

This technology can enhance the thermal performance of the wall significantly and can also improve airtightness, as gaps can sometimes be left in conventional mortar courses. Larger-format blocks have fewer joints and can also bring benefits in the speed of construction. 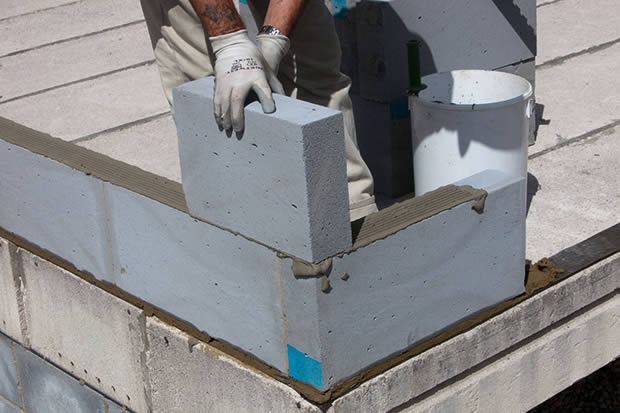 There is a wealth of useful information on the use of aircrete to help avoid coldbridging problems. The Constructive Details Limited website is a great resource including free downloads of technical advice.