Simeon Rich and his partner Sarah Farquharson say luck was on their side when they stumbled across this urban plot in Devon in 2011. “I went to see a local estate agent I know to tell him we’d sold our house, and jokingly said: ‘Now you need to find us a piece of land,’” explains Simeon. “And there on his desk were the particulars of a local plot!”

It was an exhilarating moment — swiftly dampened by an agonising three-month wait to find out if their bid was high enough. Simeon says the wait was made all the more difficult because they never dreamed they’d have this opportunity.

“Plots are rare and expensive around here so we thought we’d buy a house and renovate,” he explains. “To know there was a possibility of building our own home made the delay excruciating — I’ve never thought more carefully about anything in my life!”

The plot in Totnes is a modest 0.1 of an acre (around 450m²), gleaned from a section of garden and a demolished bungalow. But it was the affordable guide price of £95,000 and the fact that Simeon manages a building company that made the plot so tantalising. The favourable location, near to the town yet on a quiet lane close to the river, added to the appeal — the couple knew they’d found a gem.

In April 2011 Simeon and Sarah were finally given the go-ahead for their winning bid of £127,000. It was a figure they’d worked out by calculating how much they’d spend on building the house, and how much they thought the house would be worth at the end.

“We settled on £125,000 and then added £2,000 in the hope it might be higher than someone else thinking along the same lines,” he adds. “We decided that even if we didn’t make a lot of money, it would be a fantastic place to live.” 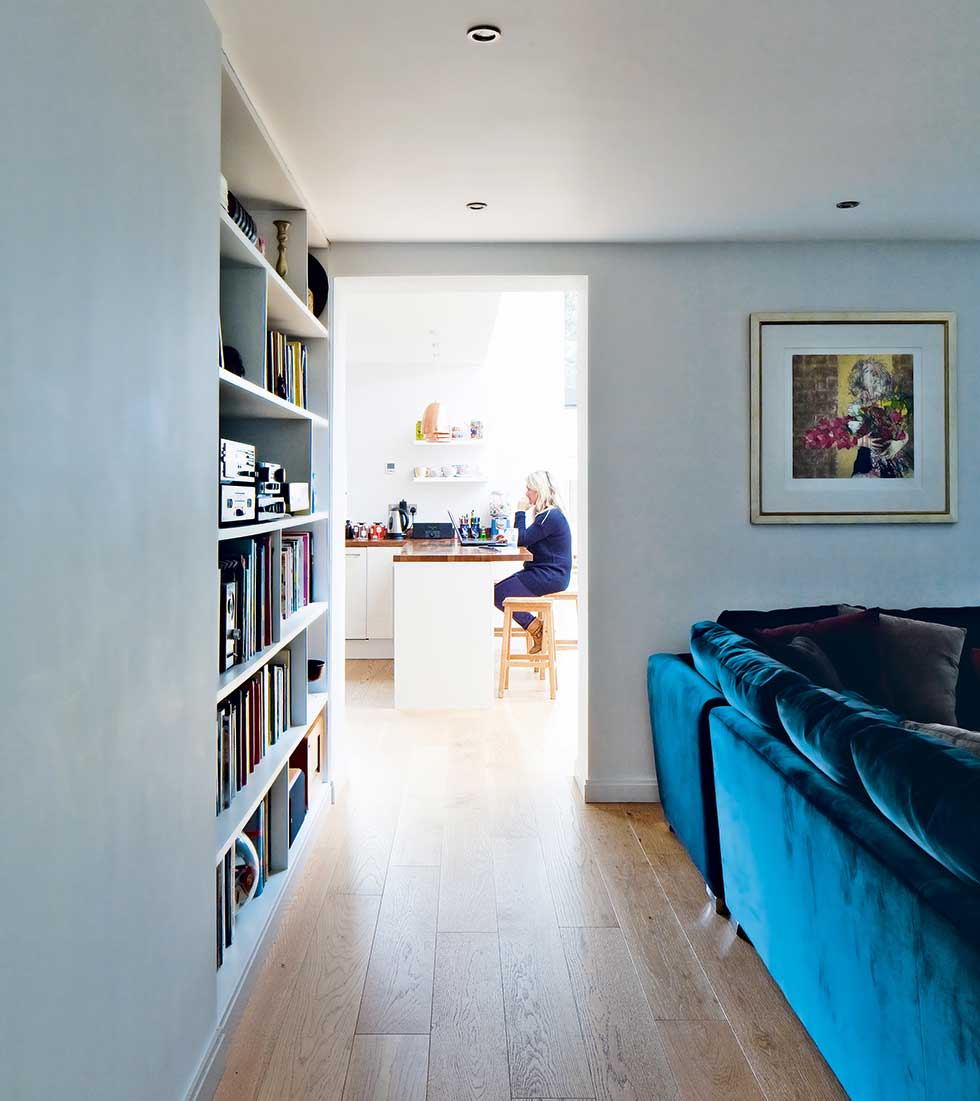 There’s no place for a space-wasting corridor in the centre of the house, where the semi-open plan living space flows into the rear kitchen/dining area. This design solution works in two ways: it allows the room widths here to be maximised, but also allows the living space to borrow additional light from this rear room

Simeon jointly owns the building company Darich Construction, so he was well placed to take on the project, and had enough experience to articulate an outline design. He then took his drawings to local architect Eilir Sheryn of practice van Ellen + Sheryn, a contact he’d made through work.

“I wanted the house to be individual rather than build to the simplest and cheapest design possible,” Simeon explains. “But we had to be careful not to get too carried away, in case it became too complicated or expensive to build.”

Simeon began by taking the limitations of the plot as a starting point. He mapped the necessities of the site first, such as the footpaths down each side of the house, space at the front for parking and a back garden. “I used the full width of the plot and left as much space as I could for the house,” he explains.

The Windows
“As we were so close to the boundary, we couldn’t have windows down the sides of the house, so it was essential to get light into the middle through the front and rear elevations.”

Windows in the rest of the house are strategically placed for interest as much as views and light, like the narrow window next to the front door that visually connects with the back of the house. “One of our bedroom windows is at chest height looking out to an oak tree in the garden,” adds Simeon. “We couldn’t have the window any lower because of the pitched roof on the kitchen below.” 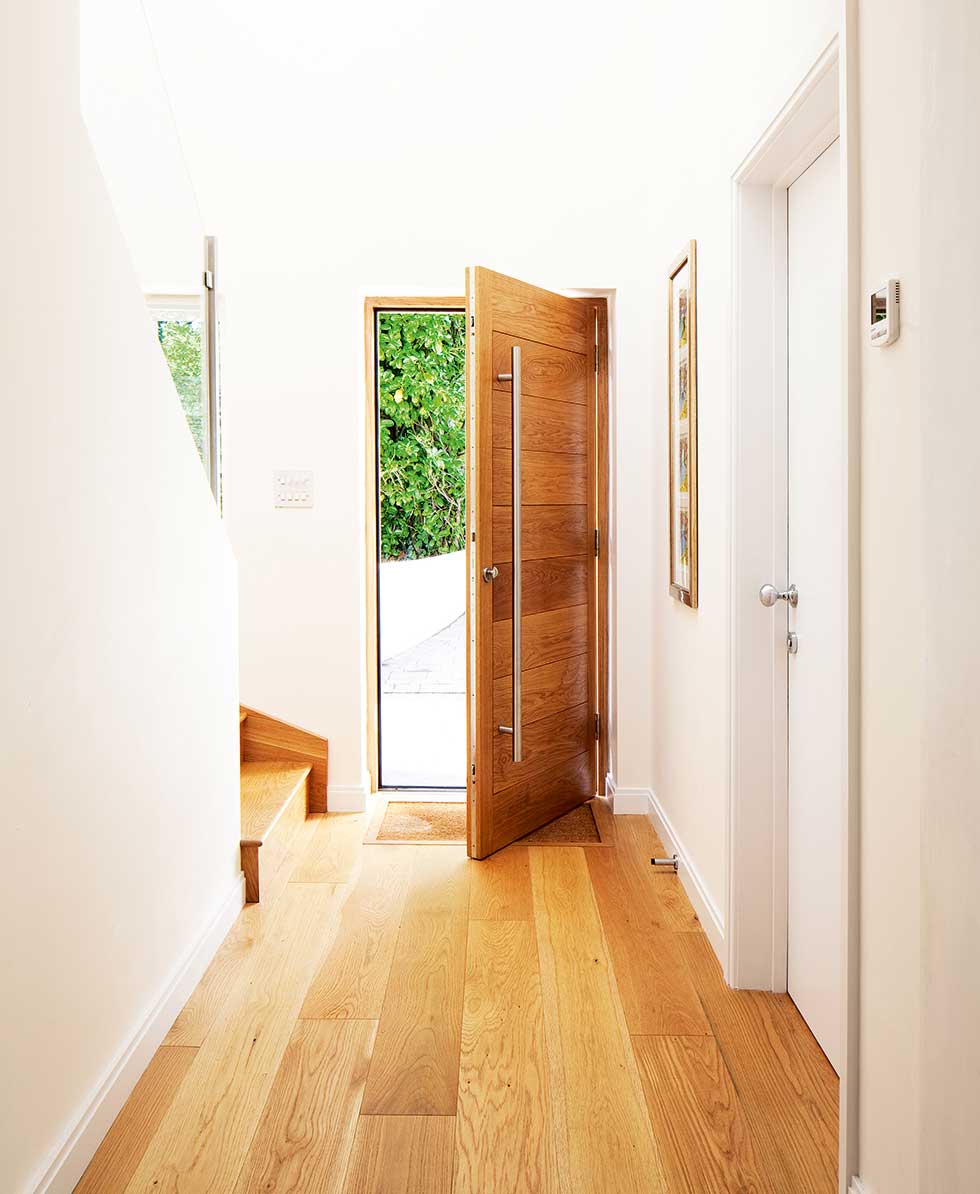 Exterior and Planning
Eilir produced a mock-up of the design and it quickly became clear to Simeon that his initial thoughts to have a flat roof with a parapet were less impressive than Eilir’s suggestion of two mono-pitch roofs, offset from one another.

“Eilir worked through various drawings on the external shape and materials, which helped us see what looked right and wrong,” Simeon says. “He suggested slate cladding on the front door elevation and Dutch bricks as a feature chimney breast inside, and really brought the final design to life.”

A few months into the planning process things seemed to be going well, but the planning officer then decided the first floor was too overbearing on the side of the neighbouring bungalow. A revision was made to reduce the width of the design, but Simeon asked if they could reclaim the lost space by extending the master bedroom over the utility and kitchen below. “Although we’ve ended up with two bedrooms that are slightly narrower than we’d first planned, they’re still a good size,” Simeon says. “But overall the design works much better because the master bedroom is much bigger.”

The second planning application was approved in February 2012 and seven months later the project began. 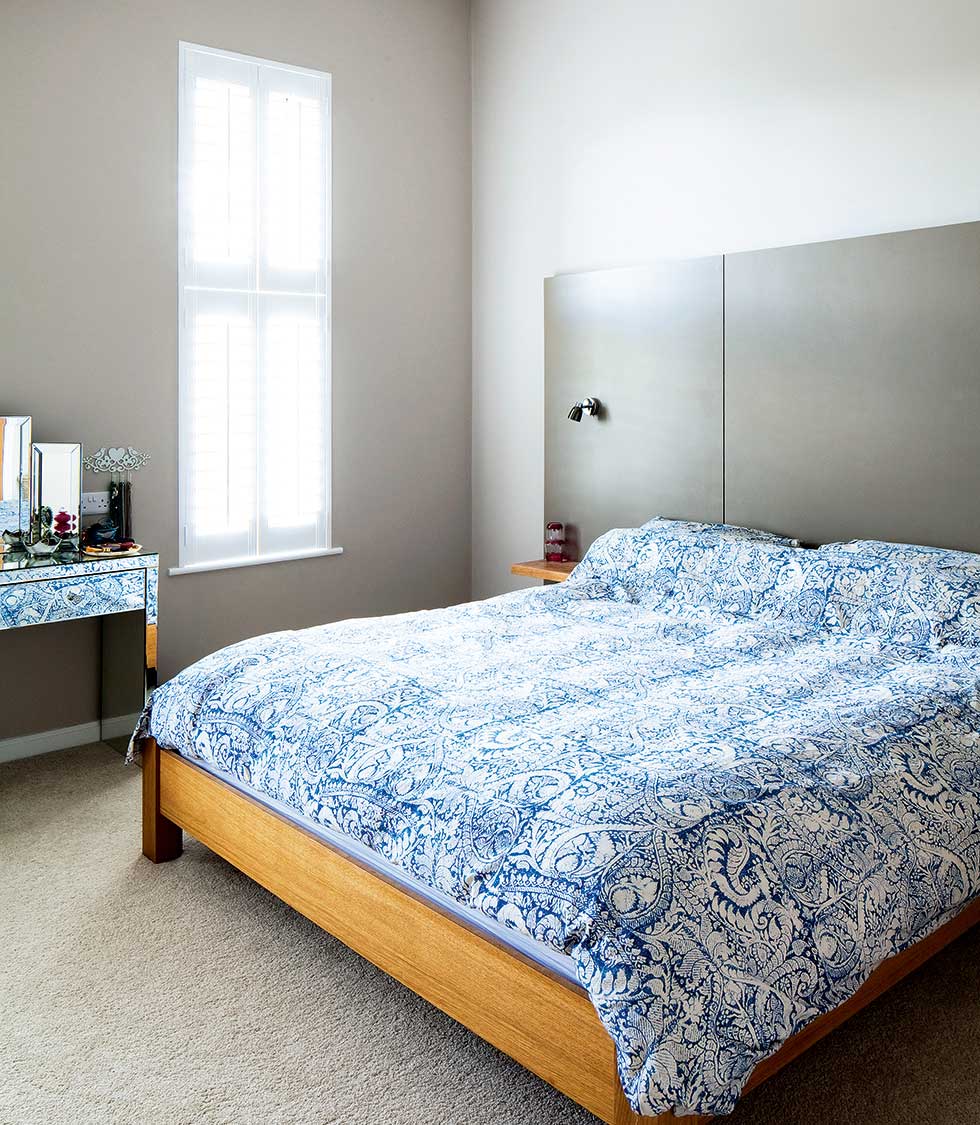 Narrow windows also draw in light and glimpses of outside, yet offer privacy from the street front

Simeon and his business partner, Jim Dart, took time out from their company to get stuck in with the build. Simeon isn’t a builder by trade (he’s an ex-barrister) but Jim is, so Simeon focused on project management and labouring.

Blockwork
The contemporary house is built in blockwork, partly because Simeon prefers this build method to timber frame, but also because materials such as structural insulated panels would have been virtually impossible to deliver to site down the narrow lane.

The roof
Building the three sections of the roof to create the offset mono-pitch was also more complex than a ‘standard’ roof due to the roof plates being set at different levels, but Simeon had done his homework here, too.

“I talked to the roofers to find out what implication the design would have on time and my budget, so I knew it would take a bit longer and cost a bit more,” he explains. “It was worth it, though, as the shape has given our home much more character.”

Character is a theme that runs through this design, and Simeon and Eilir have forgone flat, standard shapes in favour of projected design details to enliven the modest-sized house. The project was finished in July 2013, and Simeon and Sarah moved out of their flat with their daughter Esme. 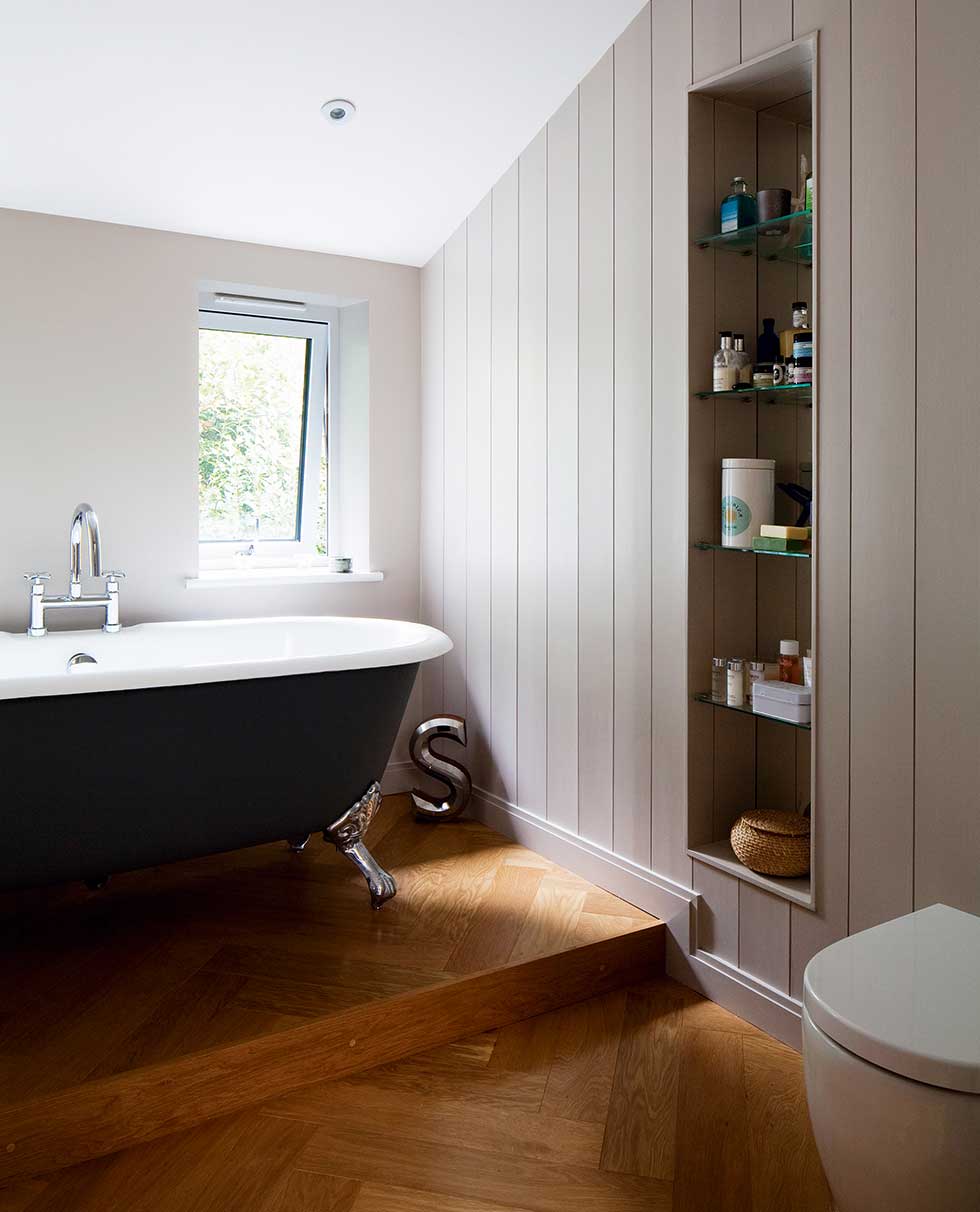 Herringbone flooring from Havwoods is a favourite feature

Connecting to Services
Simeon’s experience in the trade also made him aware from the start that they’d have to connect to the services across the lane. However, he wanted to avoid a road closure as he knew an application could take days of paperwork and attract a minimum fee of £800.

“I fought pretty hard to convince the Highways Agency we could do the connections and keep the road open,” he says. “It was still a headache, though, as we had to dig through our neighbours’ gardens, and then use a licensed contractor to dig the holes in the lane and connect everything up.”

Renewable Energy
Built to Level 4 of the Code for Sustainable Homes, the house features both solar thermal and solar photovolatic (PV) panels. According to Simeon, they hadn’t planned to install the PVs.

“We had to introduce another renewable energy source to meet Level 4,” he says. “To be honest, I’m glad we did as there are times in the year where we don’t use the mains electricity at all and we get paid £400 a year from the Government’s Feed-in Tariff.” 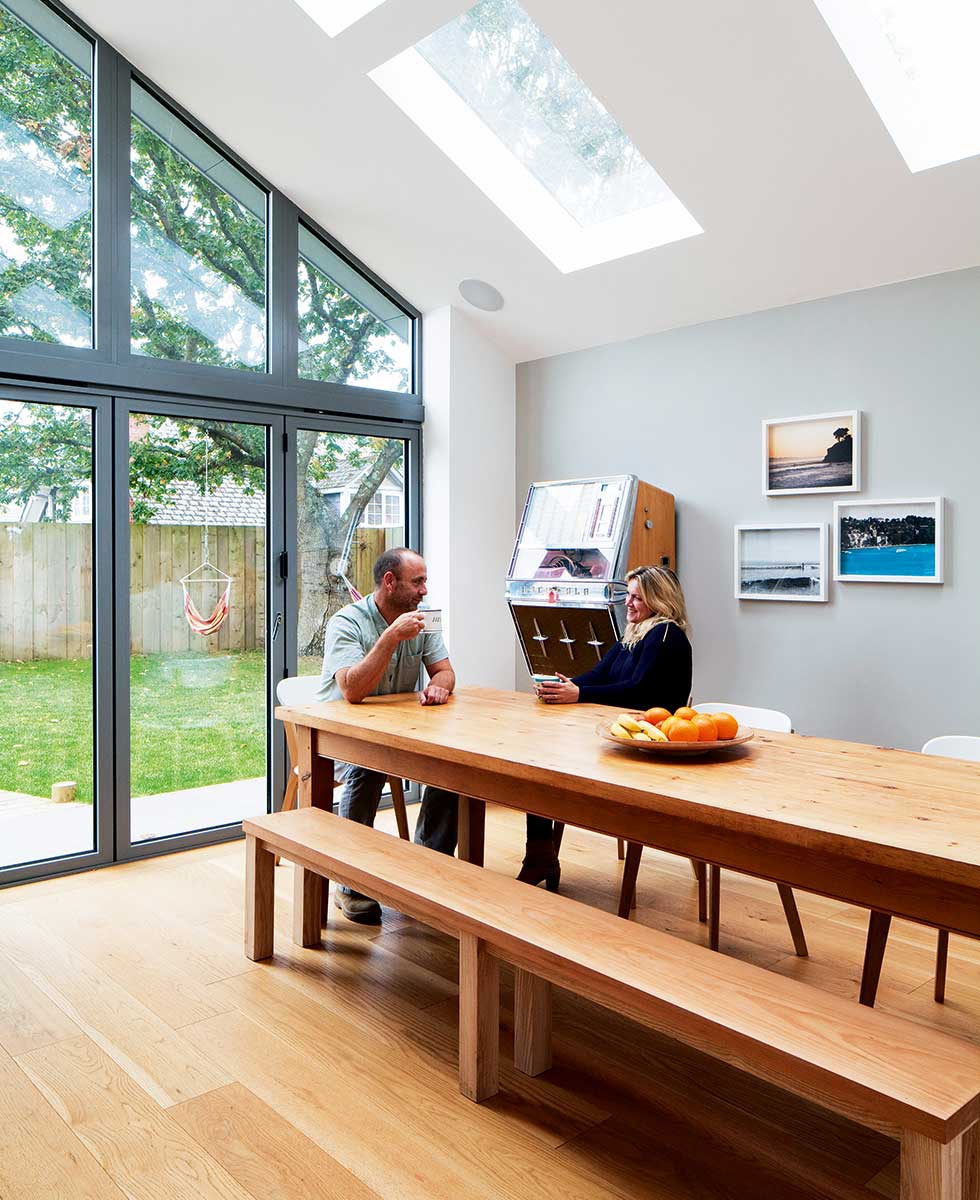 The table and chairs have been placed directly in the eye-line of the garden, where the bi-fold doors can be opened up to the patio. Rooflights, strategically placed above, also bring further natural light in without compromising on privacy

Simeon still can’t quite believe how smoothly the project ran — and that the house truly belongs to the family. “All the way through I kept thinking that this plot is too good to be true and I was going to uncover something awful like a mine shaft underneath!” he says. “The build was all I thought about for two years, day in and day out, but it’s been worth it as the whole house works perfectly for us as a family.”

And his advice for a successful build? “You can’t do too much planning ahead. Think about how you’re going to use your house and where things need to go. Get a second opinion on things when you find you’re too close to the project — it helps see the wood from the trees!”